The DOJ pursues the "real criminal" in the NSA spying scandal

While the high-level lawbreakers are protected from consequences by our political class, only the courageous whistle-blower is subject to criminal prosecution.

There are few viewpoints, if there are any, which trigger more fervent agreement across the political and media establishment than the view that George Bush, Dick Cheney and other top officials should not be criminally investigated, let alone prosecuted, for the various laws they have broken over the last eight years.  Conversely, in the Beltway world, few things will render you "Unserious" as quickly and irrevocably as arguing that Bush officials should be held accountable under the rule of law for their multiple violations of criminal statutes.  Everyone from Cass Sunstein and Ruth Marcus to David Broder and Stuart Taylor valiantly stands up and defends the President and his top aides against the terribly uncouth and disruptive suggestion that their crimes merit investigation and prosecution.

But those who are outside of -- below -- those lofty levels of Beltway political power enjoy no similar protections.  The "we-must-look-forward-not-to-the-past" excuse is only for high political officials, not lowly no-names.

Thomas Tamm is the mid-level, career Justice Department lawyer who, in 2004, blew the whistle on Bush's illegal NSA spying program by alerting The New York Times' Eric Lichtblau to the fact that Bush was eavesdropping on Americans without the warrants required by law.  He then watched his life be virtually destroyed by the FBI's ensuing -- and still ongoing -- criminal investigation into this disclosure.  Last month, Newsweek's Michael Isikoff wrote a detailed account of what Tamm did and why, and how his life has unraveled as a result.  I had been exchanging emails with Tamm for several months prior to that and the extent to which his life has been shattered as a result of his heroic whistle-blowing is truly amazing.

More amazing still is that even as the Bush administration is on its way out the door, the DOJ continues to pursue its criminal investigation of Tamm -- the very same Bush DOJ that has sanctioned multiple forms of high-level lawbreaking and, with Michael Mukasey at the helm, has blocked one investigation after the next into Bush criminality.  Tamm's lawyer, Paul Kemp of the Venable law firm (who also represented accused anthrax attacker Bruce Ivinis) just received a letter, sent on December 31, from Steven Tyrrell, the Chief of the Fraud Section in the DOJ's Criminal Division.  The full text of the letter is here (.pdf). 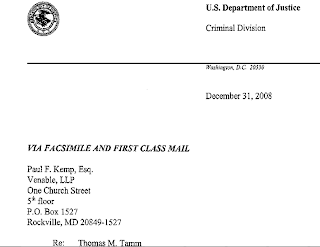 The letter begins by announcing that the DOJ and FBI are "presently investigating the unauthorized disclosure of classified information regarding the Presidentially-authorized NSA program . . . (hereinafter, 'The Terrorist Surveillance Program')."  It then references the Newsweek article and "ask[s] whether [Tamm] is willing to reconsider his prior refusal to speak with agents of the FBI and/or to testify before the Grand Jury regarding his knowledge of and/or participation in the disclosure of TSP-related information to [James] Risen, Mr. Lichtblau and others."  It demands an answer from Tamm by January 7 -- just under two weeks before Obama is to be inaugurated -- and then threateningly warns:  "if I do not hear from you by that date, I will assume that Mr. Tamm is not interested in submitting to a voluntary interview or testifying before the Grand Jury":   an obvious threat that he may be subpoenaed and compelled to do so.

Contrast Tamm's heroic behavior with the complicity and cowardice of people like Nancy Pelosi, Jay Rockefeller and Jane Harman.  It is not in dispute that those Democratic Congressional leaders were told -- repeatedly, over the course of years -- that the Bush administration was eavesdropping on Americans without the warrants required by FISA.  They had the obligation to use their considerable power to put a stop to illegal intelligence activities when they learned of them; that is, after all, the whole point of why the law requires that Congressional leaders be briefed on intelligence activities.   Indeed, that's the core function of the Congressional Intelligence Committees, the reason why they were created in the first place in the wake of the Church Commission.  As the Senate Committee's Charter itself says, the Committee is "to provide vigilant legislative oversight over the intelligence activities of the United States to assure that such activities are in conformity with the Constitution and laws of the United States."

Yet these Democratic Congressional leaders did absolutely nothing to impede Bush's illegal surveillance.  They did the opposite.  Pelosi's "concern" was that the NSA ensure it had obtained "specific presidential authorization" for the illegal program -- i.e. she merely wanted to be assured that the President had personally ordered this illegal spying.  Jay Rockefeller meekly sent a pitiful handwritten letter to Dick Cheney (.pdf) that Rockefeller then impotently and harmlessly placed in his little drawer, and never did anything else to object.  And Jane Harman, upon learning in 2004 that the NYT knew about the NSA program, replicated Bush's efforts to bully Lichtblau out of writing the story.  Then -- once the NYT finally wrote about it -- she went on Fox News and vigorously defended "the program" as "both legal and necessary," and then went on Meet the Press and disgustingly suggested she'd even be open to the idea that the New York Times -- but not the Bush administration -- should be prosecuted ("I think it is tragic that a lot of our capability is now across the pages of the newspapers"). 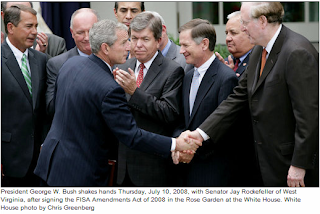 What those Democratic leaders did was, at the very best, a total abdication of their responsibilities.  More accurately, they actively and culpably enabled the illegal spying.  None of them -- for obvious reasons -- has called for any investigation or prosecution of Bush officials for having broken the law.  All three of them -- for equally obvious reasons -- voted for the FISA bill last August which immunized lawbreaking telecoms and all but ensured a total end to any real public disclosure of what happened here.  Harman and Rockefeller both attended the giddy White House signing party where they joined Bush, Cheney, Orrin Hatch, John Boehner, Joe Lieberman and other luminaries in celebrating the harmless end to the NSA scandal in which they both played such an important role.

Meanwhile, the only person to pay any price from this rampant lawbreaking -- Tom Tamm -- is the one with infinitely less power than all of them, the one who risked his job security and even freedom to bring to the nation's attention the fact that our highest government officials were deliberately committing felonies in how they spied on us.  Those who broke the law and those who actively enabled it -- the Cheneys and Haydens and Rockefellers and Pelosis and Harmans -- all protect one another, and have virtually every political and media elite righteously demand that nothing be done to them.

But there is not a peep of protest over the ongoing, life-destroying persecution of the former DOJ lawyer whose conscience compelled him to do what those cowardly Democratic leaders would not do:  take action to uncover rampant criminality at the highest levels of our government.  Harry Reid is a real tough guy when it comes to the momentous goal of preventing Roland Burris from entering the Senate. Dianne Feinstein is enraged over the grave injustice that she was not told in advance about the new CIA Director.  Is it even possible to envision a Democratic Congressional leader -- many of whom eagerly enabled most of the abuses of the last eight years undertaken by the Bush administration -- objecting to the ongoing persecution of this whistle-blower, someone who did the job they were all either afraid or unwilling to do?

That's America's justice system in a nutshell:  the President who deliberately and knowingly violated our 30-year-old law making it a felony offense to eavesdrop on Americans without warrants has the entire political and media class eagerly defend him against prosecution.  Those who enabled him -- in both parties -- block investigations into what was done.  Ruth Marcus and Cass Sunstein and friends offer one excuse after the next to justify this immunity.  But the powerless and defenseless -- though definitively courageous -- public servant who blew the whistle on this lawbreaking is harassed, investigated, and pursued by the DOJ's Criminal Division to the point of bankruptcy and depression, while the lawbreakers and their enablers stand by mute and satisfied.

UDPATE:  Actually, even when it comes to something as relatively petty (and misguided) as their pledge to exclude Burris from entering the glorious, imperial Senate, Senate Democrats -- "led" by Harry Reid -- can't avoid capitulating completely.  Jane Hamsher has all of the embarrassing details here ("A seventy-one year old dude who hasn't held office for 14 years, appointed by a crook, takes the Senate Majority Leader to the cleaners").  When you look at the people who have led both parties for the last eight years, was there any outcome even theoretically possible for the country other than what we got:  total disaster in every realm?

UPDATE II:  From the comments:

Jane Harman said "I think it is tragic that a lot of our capability is now across the pages of the newspapers."

That's exactly what she meant.

One of the most inane claims of the last eight years -- and that's obviously saying something -- was the hysterical accusation that national security had been harmed, that our "intelligence capabilities" had been revealed to The Terrorists, all because The New York Times informed the country that the President was eavesdropping without the warrants required by law rather than with them.