Mickey, "Slumdog," Winslet and the Woodman

Indies and Brits -- or at least Kate Winslet and "Slumdog Millionaire" -- dominate the Golden Globes. Plus: Mickey Rourke's face explained, via cryptic asides. 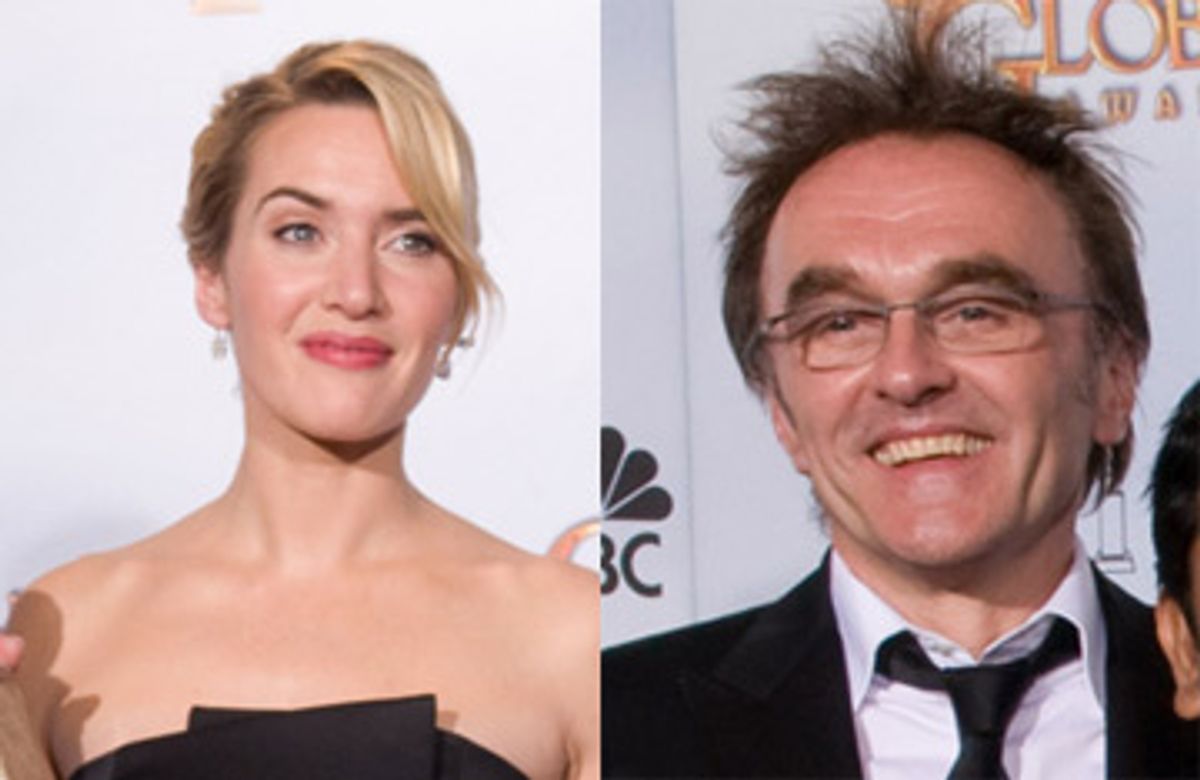 Aren't you delighted that the Golden Globes are back? Didn't you miss them? Wait -- you're not really telling me you didn't notice they were gone?

Yes, the annual self-serving, star-studded awards extravaganza hosted by a moderately dubious organization called the Hollywood Foreign Press Association (some of whose members are actually foreign, and actually members of the press) returned to the small screen last night after a one-year hiatus. Last year's Globes ceremony was washed out by the Writers' Guild strike, and a number of wags have since suggested that some Hollywood union or other had better stage a brief work stoppage every January, just to keep this largely meaningless methadone-for-Oscar-addicts off the airwaves.

Of course, to call the Globes meaningless is to suggest that the Academy Awards themselves are meaningful, and I'm sure Socrates or Aristotle had a word to describe that form of logical fallacy. As is customary, this year's Globes provided a potentially illuminating, potentially deceptive snapshot of how the Oscar race is progressing. This year that means two things, neither of them surprising in itself but taken together a potential bummer for producers and advertisers on the Feb. 22 Oscar broadcast: 1) The major films in the Oscar derby are once again indies or pseudo-indies that (by Hollywood standards) few viewers have seen; and 2) Hollywood's latest wave of British invasion has reached critical mass.

Then again, the Brit-conquest of 2009 reflects two separate and unrelated phenomena: the unexpected success of Danny Boyle's faux-Bollywood love story "Slumdog Millionaire," and the sudden ascension of Kate Winslet as the classy-but-sexy, sexy-but-classy upmarket star of her generation. After winning four Globes, including best picture (dramatic category) and best director, "Slumdog Millionaire" officially leads the the Oscar pack. After winning acting awards in two different films, Winslet is going to be ubiquitous in coming weeks, possibly so much so that the media overload will torpedo her Academy chances.

I guess we could all see the "Slumdog" wave coming, but I will admit to a certain level of mystification (and not just because I found the movie a dazzling display of style without much substance). Without getting into some medieval Christology about what constitutes an independent film and what doesn't, let's just add that several of the other plausible best-picture contenders -- "Frost/Nixon," "Revolutionary Road," "The Reader" and "Happy-Go-Lucky" -- are also adult-oriented films with fairly small audiences, and "The Curious Case of Benjamin Button" looks like the only expensive, star-vehicle film still in the running.

Here's the sum total of American actors or filmmakers to win anything at the Globes: Mickey Rourke (best actor, dramatic category) and Woody Allen (best picture, comedy or musical category). I'm sorry, but that's just weird. Not just two guys firmly associated with other eras of movie history, but two guys who had seemingly become the punch lines to their own careers. Nobody can resist a good comeback story -- Scott Fitzgerald's maxim needs adjusting: now all American lives have second acts -- and I'm as delighted as anybody to discover that Rourke remains a great actor whose life has been full of bad decisions, or that Allen can still deliver a mean-spirited comedy with a cast of hot young women. But it simply is not a good sign for American film if our two award-worthy talents have a combined age of 129.

(For the record, I buy Rourke's story that his face looks so weird now because he got the bejesus beaten out of him during his ill-advised professional boxing career of the early '90s and required corrective surgery. I could tell you a whole long story about that, full of lowlife supporting characters and cryptic Irish Republican Army connections, but here's what it amounts to: I kind of knew a guy who kind of knew Rourke from long nights in Atlantic City, and he said that was the deal.)

Europeans have always loved Rourke, so it's kind of perfect that the foreign-press mavens preferred his turn in "The Wrestler" to Sean Penn's title role in "Milk." I'm still inclined to believe that Oscar voters will swing the other way, as it were. As for Allen's "Vicky Cristina Barcelona" (effectively a European-made film, beyond Allen and Scarlett Johansson), I'd damn near bet the ranch that it won't be nominated for best picture, or in any category above the supporting actor/actress level.

Beyond Rourke, the other acting Globes went to a panoply of English-speaking non-Yanks: Winslet, Winslet, another English chick, Winslet, an Irishman, Winslet and a dead Australian. OK, that's too many Winslets; it's one of those names where the more you type it the stranger it looks. English chick no. 2 is Sally Hawkins of "Happy-Go-Lucky," who might not even get an Oscar nomination even though she deserves one, the Irishman is Colin Farrell of "In Bruges" (who might not etc.) and you know who the Aussie is and what's going to happen in that category.

While the foreign-film category at the Globes is even more random than at the Oscars, Ari Folman's extraordinary Israeli animated documentary "Waltz With Bashir" now becomes the favorite in at least that category (why it wasn't also nominated as an animated feature I have no idea). More surprising still, none of the foreign films nominated was an utter embarrassment -- with the possible exception of "The Baader Meinhof Complex," the German entry, which I haven't seen.

Beyond The Multiplex Golden Globes Movies