It's a bird, it's a plane, it's Super-feminist! 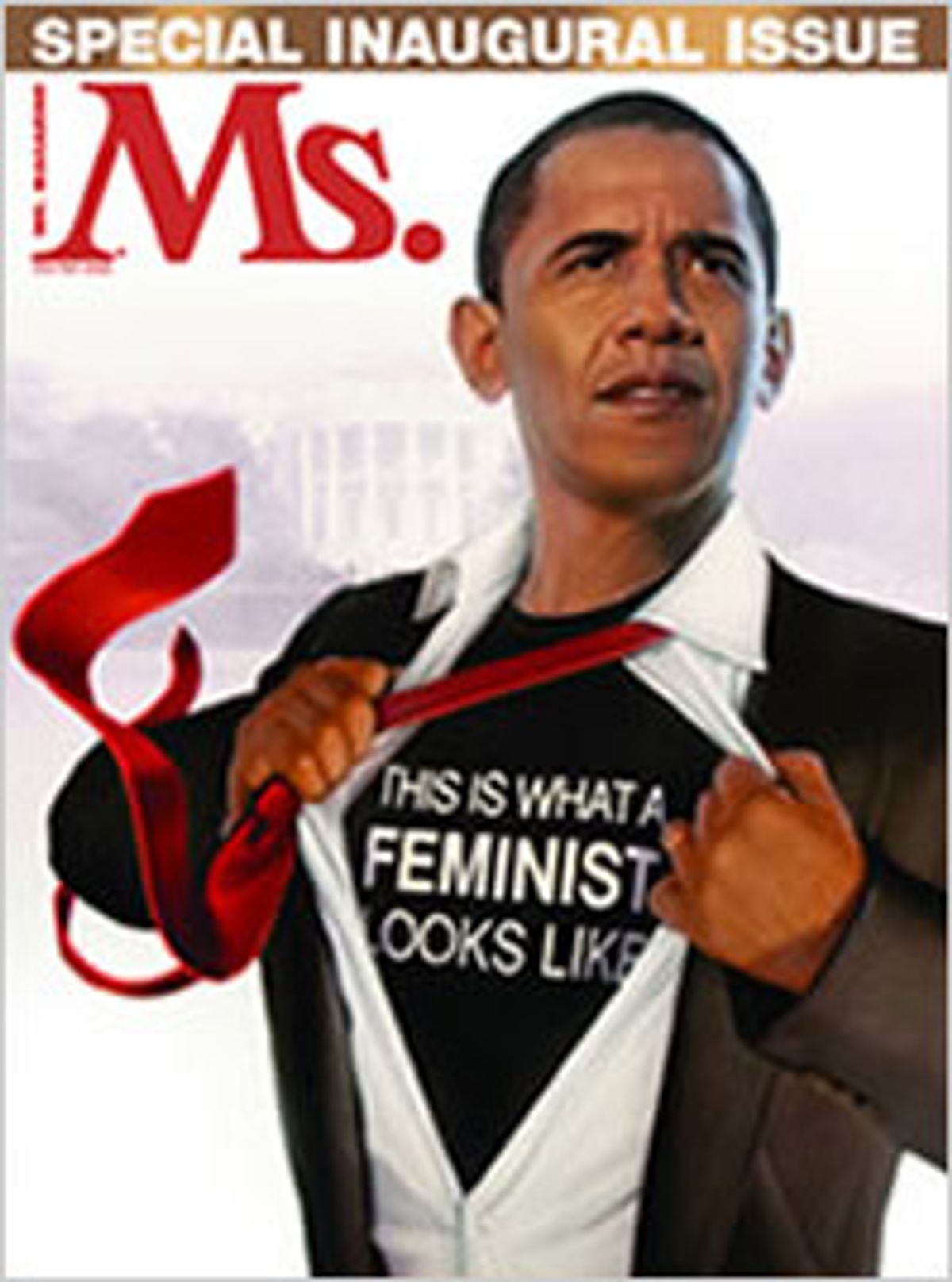 On the cover of this month's Ms. magazine, Barack Obama is depicted as Clark Kent, ripping open his dress shirt to reveal a "This is what a feminist looks like" T-shirt. When I saw the cover yesterday, I thought: Well, that's silly. Yes, we're all crossing our fingers that Obama is a superhero who will rescue our country, and his policies do seem basically feminist. But isn't it, I don't know, a little premature to declare him a superhero, particularly of feminism?

Then I considered that perhaps the intended message was simply that Obama, widely heralded as our nation's savior, also happens to be an undercover feminist. And then I moved along. But the cover has since sparked a feminist firestorm online.

Some, like Ann Bartow of Feminist Law Professors, saw it as a way to "mock" supporters of Hillary Clinton. A blogger at Tennessee Guerrilla Women writes, "File this one under: Does Feminism Even Need Women? … the easy to please feminists over at Ms. Magazine put Barack Obama on the cover and gush like teeny-boppers that Obama is some Feminist Super Man who will, presumably, save us little wimin." Similarly, Amy Siskind of the Daily Beast suggests, "The current vision of 'feminism' is a man striking a Superman pose … It is time that we, our daughters, and granddaughters discover our inner Wonder Woman."

It's understandable that some Clinton supporters resent the cover, but it hardly seems a direct dig at their candidate. It's easier for me, on the other hand, to understand the outrage over the Superman imagery. I didn't have a visceral reaction to it myself but admit to being perplexed that a magazine, which has for more than three decades engaged in incisive feminist commentary, would go for such culturally loaded imagery. (But I never much liked the magazine's taste for Wonder Woman symbolism, either.)

My colleague Rebecca Traister wrote today in an e-mail that her discomfort with the cover is about "the way in which a feminist magazine, founded on the principles and imagery that women can be their own superheroes, would so easily slip into a mode (and, realistically, make a play to garner controversy and attention) in which they make an undeniably excellent man into a Man of Steel." She added: "Can't he just be our president whom we're happy we elected and can't wait to see in office, and who we put on the cover of the magazine in the T-shirt and whose feminist politics we celebrate? Do we have to turn him into our otherworldly savior?"

Eleanor Smeal, publisher of Ms. and president of the Feminist Majority Foundation, explained today that the aim was simply to "capture both the national and feminist mood of high expectations and hope." She also clarified that they "are not giving President-elect Obama a blank check," despite picturing Obama as a feminist Clark Kent. "Ultimately, we must hold our leaders' feet to the fire or, to put it more positively, uplift them when they are caught in the crosscurrents of competing interests," she writes.

Is the cover a giddy celebration of the feminist potential in the Obama administration or a patronizing depiction of feminism's "male savior"? Everyone seems to have an opinion -- so it's time to hand it off to you, dear readers.