Eddie Albert in "1984," the best of MST3K, an even sexier "Lady Chatterley," classic Brit-horror, and Donald vs. Chip 'n' Dale. 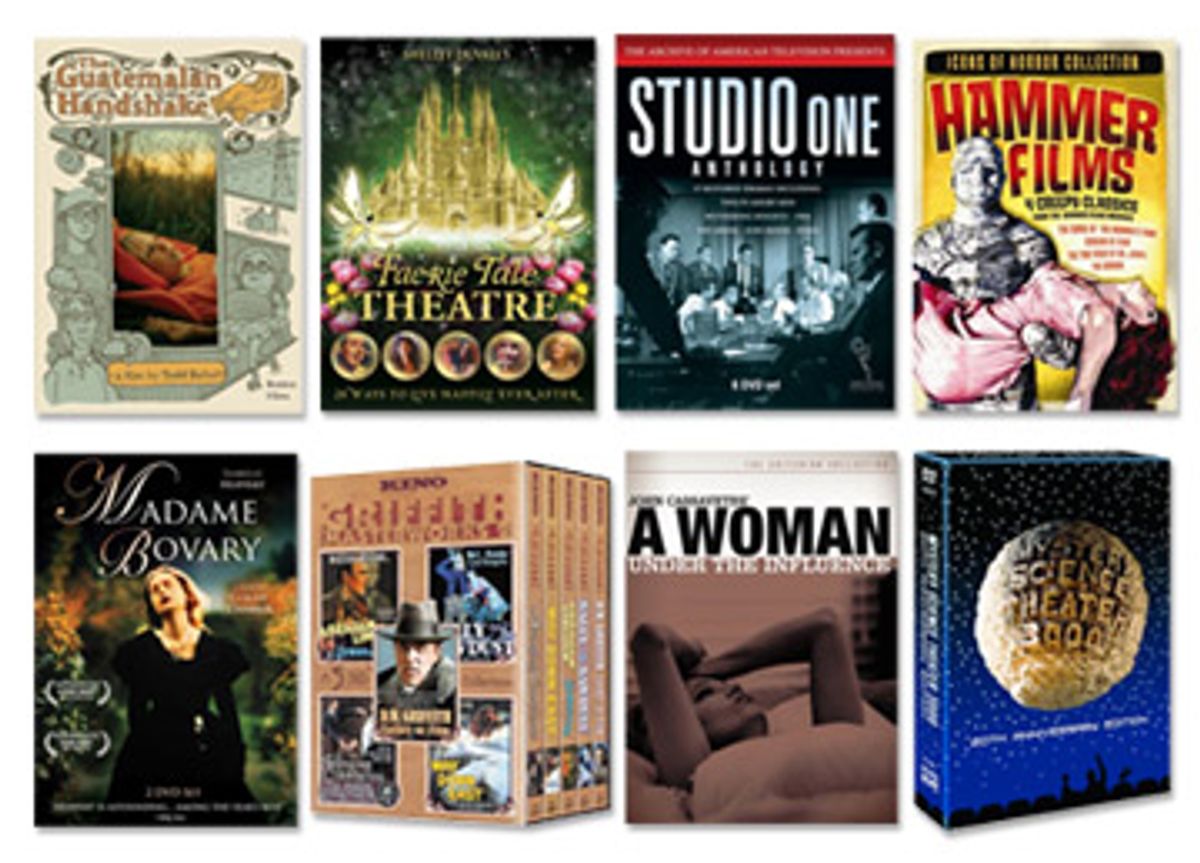 Well, here's one New Year's resolution I can actually fulfill. After that it's back to the booze and criminality! To the dismay of publicists and DVD distributors everywhere, this column is known for its appalling backlog of home-video product. I acquire fascinating new releases with the very best intentions, write about a handful of them, and wind up with a daunting pile of stuff that all deserves its own column and damn sure isn't going to get it.

It'd be nice to take a long, lingering look back at all the almost-overlooked cinematic effluvia of the year just past -- except that, no, it wouldn't. I'm off to Sundance this weekend to catch a bunch of movies the regular world won't catch until summer or fall (more on that anon) and when I get back we're running a tighter ship around here, dammit all. For now, here's my post-holiday, buy-a-gift-for-your-own-damn-self guide to the 2008 DVDs I shoulda, coulda and in another universe woulda told you about already.

Griffith Masterworks, Vol. 2 Stone racist and all-around unpalatable individual that he was, David Wark Griffith is justifiably considered the inventor of modern cinema, and this Kino set of five of his lesser-known features -- plus the 1993 British doc "D.W. Griffith: Father of Film" -- is an essential for any movie buff's library. Films include the classic Lillian Gish melodrama "Way Down East," the W.C. Fields comedy "Sally of the Sawdust," and Griffith's only two sound features, "Abraham Lincoln" (starring Walter Huston) and "The Struggle."

Studio One Anthology A remarkable piece of television history, this Koch Vision set captures 17 episodes of the groundbreaking 1950s CBS series "Studio One," which brought classic and modern drama to a contemporary audience. Would you believe "1984," with Eddie Albert as Winston Smith and Lorne Greene as O'Brien? Charlton Heston as Heathcliff in "Wuthering Heights"? Jack Lemmon and Eva Marie Saint in "June Moon"? Theodore Bikel as "Julius Caesar"? Plus original TV dramas by Gore Vidal and Rod Serling? Technical quality of these Archive of American Television captures is iffy here and there, but well worth the price of admission.

Mystery Science Theater 3000: 20th Anniversary Edition Is this the greatest movie-buff cult series in television history? Well, duh! Any selection of just four films from the MST3K archives is bound to disappoint some fans, but Shout Factory's seven-hour package, in my judgment, is pure delight. Riffed-on flicks (drawing on both the Joel Hodgson and Mike Nelson eras, o devotees) include "First Spaceship on Venus," "Laserblast," the all-time anti-classic "Werewolf" and "Future War," released just two years before the MST3K crew spoofed it. Extra features include a three-part doc on MST3K history, and the gang's 2008 reunion at San Diego Comic-Con.

"The Guatemalan Handshake," "The Free Will" and "Team Picture" New York blogger-critics Andrew Grant and Aaron Hillis are even crazier than most people in their so-called profession. In the teeth of a crippling recession, they have launched Benten Films, a DVD label devoted exclusively to adventurous and inventive films, both American and international, that other distributors won't touch. Their initial slate has included Todd Rohal's whimsical slice of Americana oddness "The Guatemalan Handshake," the wrenching German drama "The Free Will," about a convicted sexual predator trying to restart his life once released from prison, and Kentucker Audley's "Team Picture," an amiable neo-slacker odyssey across the mid-South.

Icons of Horror: Hammer Films With no pictures from the 1950s-'60s Frankenstein or Dracula series, this two-disc set from the beloved British horror studio can't be considered anything like a definitive collection. Given Hammer's haphazard history on U.S. DVD, I'll take it. Taken on their own terms, all four films on this set are terrific, claustrophobic B flicks drawn from Hammer's early-'60s heyday: "The Two Faces of Dr. Jekyll" (with Christopher Lee), "The Curse of the Mummy's Tomb," "The Gorgon" (with Lee and Peter Cushing) and the rarely seen psychological thriller "Scream of Fear."

The Centennial Collection: "Sunset Boulevard," "Roman Holiday" and "Sabrina" Normally, you want to avoid Hollywood studios' celebrations-of-self like the spotty plague, but Paramount Pictures' 100th birthday party has gotten off to a dazzling start with double-disc, high-definition versions of three of the studio's best films of the 1950s. The fact that at least two of these -- Billy Wilder's scathing intra-Hollywood noir "Sunset Boulevard" and William Wyler's Audrey Hepburn-Gregory Peck romantic comedy "Roman Holiday" -- qualify as two of the greatest American films ever made doesn't hurt. Wilder's upper-crust romp "Sabrina" is charming, of course, but doesn't quite belong in the same company. (I'm never big on Bogart doing comedy.) Loads of extra features, including mini-docs on Hepburn, William Holden and Gloria Swanson and an overdue tribute to blacklisted "Roman Holiday" screenwriter Dalton Trumbo.

"The Small Back Room" and "This Sporting Life" Doggedly, I try to keep up with all the great stuff the Criterion Collection releases, but no single human can do that. Here, in separate Criterion releases, are two of the greatest British films ever made, and also two of the most undervalued. Michael Powell and Emeric Pressburger's complex and claustrophobic psychological drama "The Small Back Room" has almost none of the cinematic showboating of their more famous films, but captures both the nobility and the self-torment of wartime Britain in convincing detail. Lindsay Anderson's electrifying "This Sporting Life," with the young Richard Harris as an embittered Yorkshire miner-cum-athlete, launched the "kitchen-sink realism" movement of the mid-1960s.

Meanwhile, Criterion is preserving crucial works of American movie culture by gradually rolling out new high-def digital versions of the works of John Cassavetes, who certainly didn't invent American independent film but became its recognized pioneer and avatar. Watch Peter Falk and Gena Rowlands go after each other in the mesmerizing, devastating 1974 portrait of a marriage in decay, "A Woman Under the Influence." See Ben Gazzara slide into moral ruin and horrendous crime as the doomed protagonist of Cassavetes' slow-motion take on film noir, "The Killing of a Chinese Bookie."

"Antonio Gaudí" and "Dalí in New York" Two movies about Spanish guys with acute-accent I's in their names (I know, I know, those are Catalan names) and also two peculiar and delightful films about modern art. Japanese experimental filmmaker Hiroshi Teshigahara takes you on a sensuous, memorable tour of Gaudí's greatest Barcelona buildings in what must be the greatest-ever documentary about architecture, and New York avant-gardist Jack Bond captures Salvador Dalí's Christmas 1965 visit to the Big Apple as a dazzling collision of celebrity, capital and and ideas.

Shelley Duvall's Faerie Tale Theatre: The Complete Collection Is this semi-legendary early-'80s cable series for adults or for kids? Depends on what the meaning of is is, I would say -- but whatever your age, these productions supervised by the one-time "Popeye" star are strange and wonderful things, with their Maxfield Parrish-inspired painted backdrops and rosters of unlikely stars and name directors. Consider: "Aladdin and His Wonderful Lamp," directed by Tim Burton and starring James Earl Jones, Leonard Nimoy and Valerie Bertinelli. No, I'm not kidding. Or "Beauty and the Beast," with Susan Sarandon, Klaus Kinski and Anjelica Huston, directed by Roger Vadim. (Again, I kid not.) I could go on: Vincent Price and Vanessa Redgrave in "Snow White"; Francis Coppola directing "Rip Van Winkle"; Mary Steenburgen as "Little Red Riding Hood," with Malcolm McDowell as the Big Bad Wolf. I can stop now, because you've ordered it already.

The Chronological Donald, Vol. 3 and Popeye the Sailor, Vol. 3 Yeah, I was dubious about showing my kids cartoons made 60 years ago too. The humor is strange and outdated; the stories are rife with random violence, cruelty and references to arcane technology. No one ever wears a seat belt, and both animals and people frequently smoke enormous stogies. But here's the thing: Nini and Desmond -- who do not live in enforced Luddism, by the way; they love "Cars" and "Charlotte's Web" and the Disney's "Pooh" -- are totally nuts for the demented Darwinian universe of Donald Duck, and especially its leading miscreants, Chip 'n' Dale. If you're an animation buff, know that the latest volume of Disney's "Chronological Donald" features beautiful widescreen transfers of classic Duck shorts (including three Oscar nominees), and some nice supporting material. As for Warner Bros.' latest selection of 32 World War II-era Popeye shorts -- well, it's magnificent, surreal animation, but the level of ultra-violence is astonishing, and these require a ton of context and explanation if shown to kids. Who are the Nutzis Popeye must defeat in "Spinach fer Britain"? Why does Bluto take a ferocious beat down in every episode and come back for more? These are questions philosophers have pondered for eons, without notable success.