Get money into the economy now

Is there danger that the stimulus could become nothing more than an appropriations bill? And can green jobs save the economy? 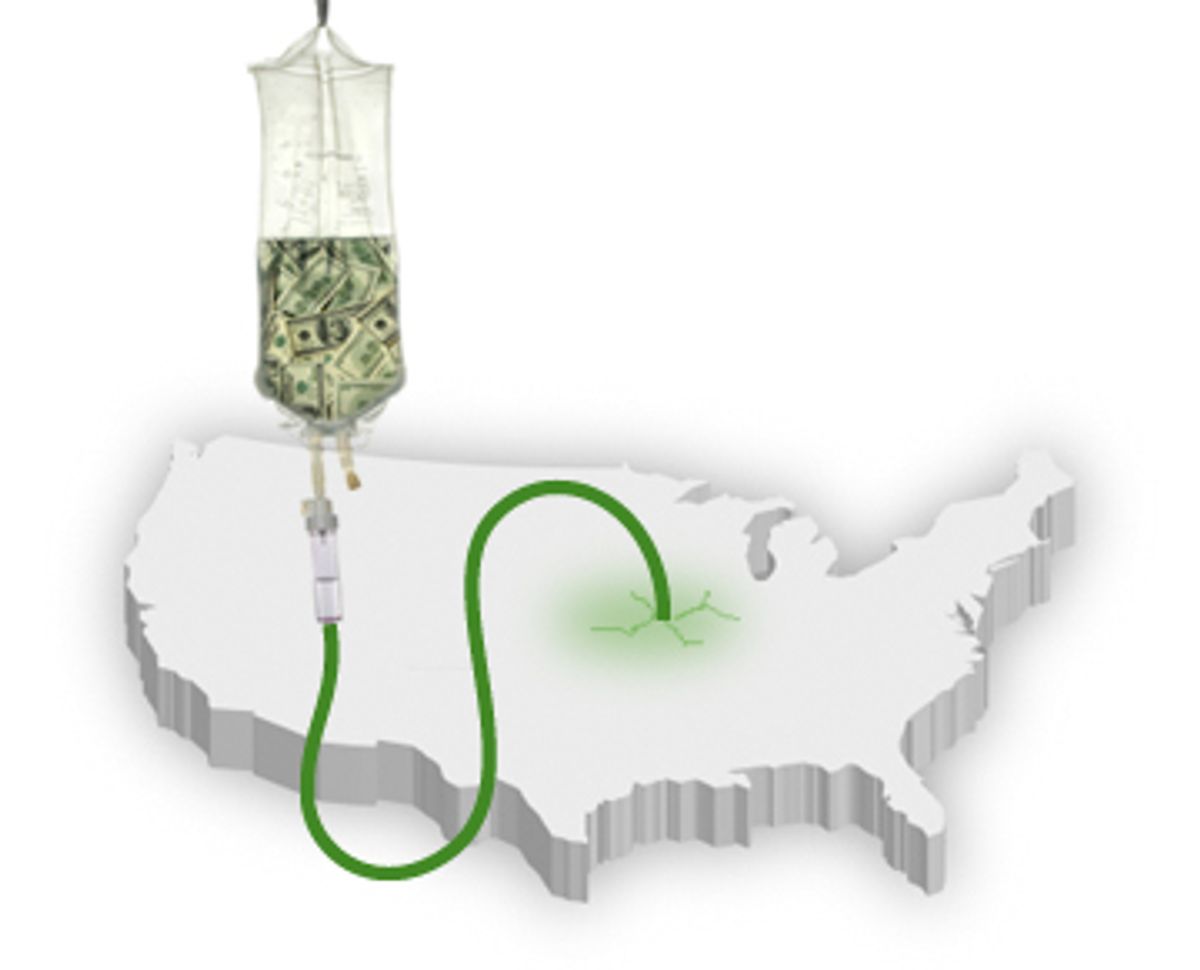 Michael Lind is director of the American Infrastructure Initiative at the New America Foundation.

There are worrying signs that what may end up being a stimulus package of a trillion dollars or more is being turned into an ordinary piece of legislation, with its content to be determined by politics, special interests and ideology.

First, politics. The need to co-opt Republicans explains the Obama team's inclusion of middle-class tax cuts as part of the proposed package. While it makes no sense to raise taxes during a recession, tax-cut Keynesianism has repeatedly failed and there is no need to repeat the experiment. The majority Democrats should find another way to buy off congressional conservatives and libertarians whose worldview is as bankrupt as the economy.

Then there are special interests. Infrastructure spending should be part of the package, and "shovel-ready" projects at the state and local level should get some funding. But modernizing American infrastructure requires two major reforms. First, decisions about infrastructure spending need to be moved from congressional pork-barrel politics to the independent, nonpartisan National Infrastructure and Reinvestment Bank that Barack Obama favors. Second, there needs to be federal, state and local collaboration on a generation-long project to modernize America's transportation, energy and communications grids. These are long-term programs, and exaggerating what can be done by a crash infrastructure program will merely create an anti-infrastructure backlash in a few years, particularly if the money is seen to have been wasted on local pet projects.

Finally, there is ideology -- in this case, liberal ideology. Many liberal opponents of sprawl are arguing that this short-term infrastructure program should somehow be used to turn America from a nation of suburban car-drivers to a nation of apartment dwellers using mass transit. Whatever one thinks of the war on sprawl, it's absurd to think that a few hundred billion dollars as part of a stimulus package is going to significantly alter American driving and working patterns. It's equally naive to think that a significant dent in global warming can be made by devoting a portion of stimulus money to projects like green building weatherization programs, laudable as they may be. Indeed, the green parts of the proposed stimulus package look suspiciously like "greenwash," an attempt to co-opt environmentalists, just as the tax-cut elements look like an attempt to buy right-wing support.

The purpose of the stimulus -- getting money into the economy, fast -- is lost, if it turns into the world's biggest ordinary appropriations bill, with something to placate every lobby and sect inside the Beltway. The money should be sent out the door as quickly as possible and spread around with the fewest possible restrictions on its use and a minimum of micromanagement by Congress. That doesn't require a Troubled Assets Relief Program czar, or a White House, with arbitrary discretion. Rather, it means measures like unrestricted grants to states, cities and counties to refill depleted treasuries and to be spent on public services and infrastructure; extensions of unemployment insurance; temporary tax rebates, rather than permanent tax cuts, that people can spend as they please; and timely bailouts to finance and industry that are not conditioned on fulfilling a cobbled-together list of political demands, which may be reasonable but which can be pushed later. I, for one, would have doubts about a small green car that Washington hastily blackmailed Detroit into building as a condition of an emergency bailout.

A trillion-dollar stimulus, yes. A trillion-page stimulus bill, no.

Phil Angelides is chairman of the Apollo Alliance. He was the California state treasurer from 1999-2007 and the Democratic nominee for governor of California in 2006.

There is no doubt that our economy needs an immediate shot in the arm. And there's also no doubt that the recovery plan must not only build economic prosperity, but climate stability and energy security as well. The financial sector collapse provides the opportunity for America to rethink how we do business -- to move toward a more sustainable economy that creates broadly shared prosperity.

The Apollo Alliance has proposed an "Apollo Economic Recovery Act" to give a critical jolt to America's economy and support American businesses and workers so that they can set their feet firmly on the path to the clean energy economy. Our plan would invest $50 billion immediately to create or retain over 650,000 direct jobs and an additional 1.3 million indirect jobs in communities around the country, and would retrain at least 300,000 more Americans to participate in the clean energy economy.

Our buildings, transportation network and power grid are the backbone of our economy. Immediate investment to rebuild our infrastructure to be greener and more efficient will create hundreds of thousands of jobs today, save billions of dollars in energy costs tomorrow, and reduce our carbon footprint over the long term.

Apollo has advocated the following specific, immediate investments that, among others, will result in a "green" payday for our environment and our economy: $6 billion in Energy Efficiency and Conservation Block Grants to be used by cities, counties and states for energy efficiency and renewable energy programs; $10 billion to upgrade the transmission grid to better connect consumers and renewable energy resources and improve reliability and efficiency; $6 billion in ready-to-go public transit projects across the country including intracity rail, regional rail and bicycle/pedestrian facilities; $8 billion to fix existing bridges and roads that are crumbling across America -- encouraging infill development that reduces sprawl.

But we also need to think beyond the physical infrastructure of transit and buildings and prioritize investments in America's workers and technological innovators as well.

The opportunities for jobs and businesses in the clean energy economy are abundant, and American workers can't wait to roll up their sleeves and get to work. But to tap the immense productivity of our people, we need to invest in high-quality green-collar job training programs that connect clean energy employers with unemployed and underemployed Americans who are hurting most from the current economic crisis.

The Apollo Economic Recovery Act calls for investing in the Green Jobs Act for grants to prepare workers for green-collar jobs, and to move low-income workers out of poverty and into family-supporting careers; creating a civilian service program of young adults and seniors to give homes in low-income communities an energy makeover; and providing Clean Energy Tomorrow scholarships in science, math and engineering to give America the homegrown talent it will need to be the world's leader in clean energy technology.

Phil Angelides is Chairman of the Apollo Alliance. He was the California State Treasurer from 1999-2007 and the Democratic nominee for Governor of California in 2006.