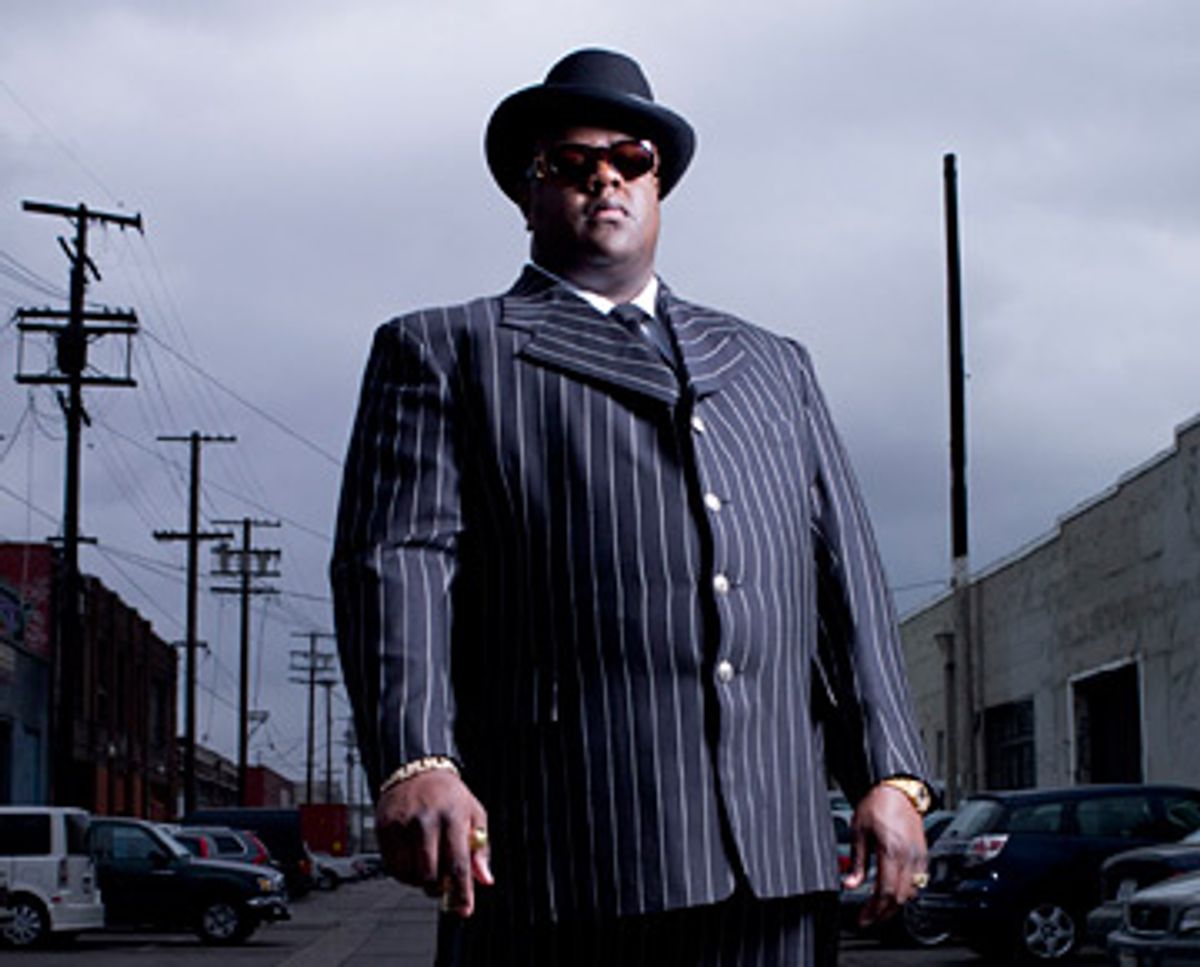 "Notorious," George Tillman Jr.'s biopic of the late rapper Biggie Smalls, is surprisingly and pleasantly unflashy, a straightforward picture that makes a distinction between classiness and bling. In telling the story of Christopher Wallace -- the kid from Bed-Stuy, Brooklyn, who would become Biggie, or the Notorious B.I.G., the enormously popular rap artist who released only one smash-hit album before his premature death in 1997 -- Tillman opts for a purely conventional approach, and his choices feel right: The movie slips into an easy, satisfying groove. Biggie was a bright, chubby kid (the actor who plays him as a child is Wallace's real-life son, Christopher Jordan Wallace) whose mother, Voletta (Angela Bassett), brought him up strictly but couldn't prevent him from sneaking off to sell crack on the street. Wallace (the grown-up version is played by Brooklyn-born rapper Jamal Woolard) did jail time, during which he sharpened his skills as a performer; after his release, he sought a career as a rapper, eventually teaming with producer Sean "Puffy" Combs (Derek Luke).

Tillman and screenwriters Reggie Rock Bythewood and Cheo Hodari Coker trace Biggie's rise -- including his thorny romances with Lil' Kim (Naturi Naughton) and the woman who would became his wife, Faith Evans (Antonique Smith), and his involvement in a deadly feud between East Coast and West Coast rappers, instigated by his bitter falling out with fellow rapper Tupac Shakur (Anthony Mackie) -- in a way that hints at but doesn't aggressively foreshadow the tragedy to come. Maybe Tillman felt he didn't have to crayon in the impending thunderclouds so darkly because everyone knows how this story ends: Biggie was gunned down in Los Angeles, as he was leaving a party following the Soul Train Music Awards; his killer has never been found. (Tupac had been shot and killed in Las Vegas just six months before, and his murder remains unsolved as well.)

Instead Tillman focuses on Biggie's charisma and on the power he wielded over the ladies, over his friends and over his audience. Woolard's Biggie has a soft-bellied, cushiony charm: Naughton and Smith play Lil' Kim and Evans as tough cookies who've seen it all (or at least most of it), and yet they melt, predictably, when Biggie starts in with the love talk. His flirtations are like poured chocolate. (Little wonder he succeeds, pretty much, at remaining romantically involved with both, even after his marriage to Evans.) Woolard plays Biggie as the kind of guy who could get away with anything, and often did: One minute, the mother of his first child -- whom he fathered when he was still a teenager -- might show up on his doorstep, complaining that he isn't spending enough time with the little girl, and you'd have no doubt she's right. (Biggie would go on to father two more children, with Evans.) The next, we see Biggie bouncing his young daughter on his knee, teaching her the words to Kurtis Blow's "The Breaks," one of the cornerstones of hip-hop.

Any biography is ultimately a mosaic of details, and Tillman has chosen his wisely. We get a picture of Biggie as both a cad and a smooth talker, but also as a man susceptible to guilt. Whether he's drifting toward the wrong side of the law or two-timing whatever woman he's supposedly committed to, the Biggie of "Notorious" always manages to be pulled back into line by his own essential decency. The movie suggests an imperfect man who, nonetheless, was raised right.

Admittedly, the portrait "Notorious" gives us is probably a little too -- maybe a lot too -- glowing. Voletta Wallace was one of the movie's producers, and so it's possible that Biggie is characterized as more of a pussycat than he really was. But the scenarios Tillman chooses to dramatize, and the players in them, at least have the ring of truth. Luke makes a wonderful Puffy, a wily, intelligent businessman who's possibly more likable than the real-life version. (Combs, incidentally, is one of the movie's executive producers.) And Bassett, an actress who's seldom short of marvelous, stretches the role of the saintly mom into something beyond a stereotype. Maybe it's because Bassett's voice alone -- a kind of strutting purr -- conveys so much authority that we have no trouble buying Voletta as the kind of mom who could, at least some of the time, cajole her son into behaving. Beyond that, "Notorious" is a reminder that Bassett gave one of her finest performances in another music-biz biopic, as Tina Turner in the 1993 film "What's Love Got to Do With It."

Ultimately, Tillman -- whose previous directing credits include "Soul Food" and "Men of Honor" -- recognizes that while the facts of Biggie's life are important, what we're really interested in is the dazzling power of his legend. Tillman gives us plenty of opportunities to bask in Biggie's success, the symbols of which -- well-tailored pinstripe suits and natty homburgs -- he wore with pride. And Tillman does a nice job of showing, in concise movie shorthand, what a breezy, unfettered performer Biggie could be. In one moment that sits halfway between a semi-realistic depiction and a dream sequence, Biggie shows up at Combs' studio to cut his first record, arriving before anyone else. He steps up to the mike, which glows in the darkness like the fulfillment of every dream he's ever had. And as he begins rapping -- a stream of words that isn't, technically speaking, a melody, although the conviction behind these words, combined with the crisp precision with which they fall into place, is nothing sort of melodic -- we understand why there was, and why there could only be, one Biggie. Instead of slimming him down to a manageable size, Tillman allows him to remain larger than life.