At the Emily's List gala, Hillary Clinton is her old feminist self once again -- only better. 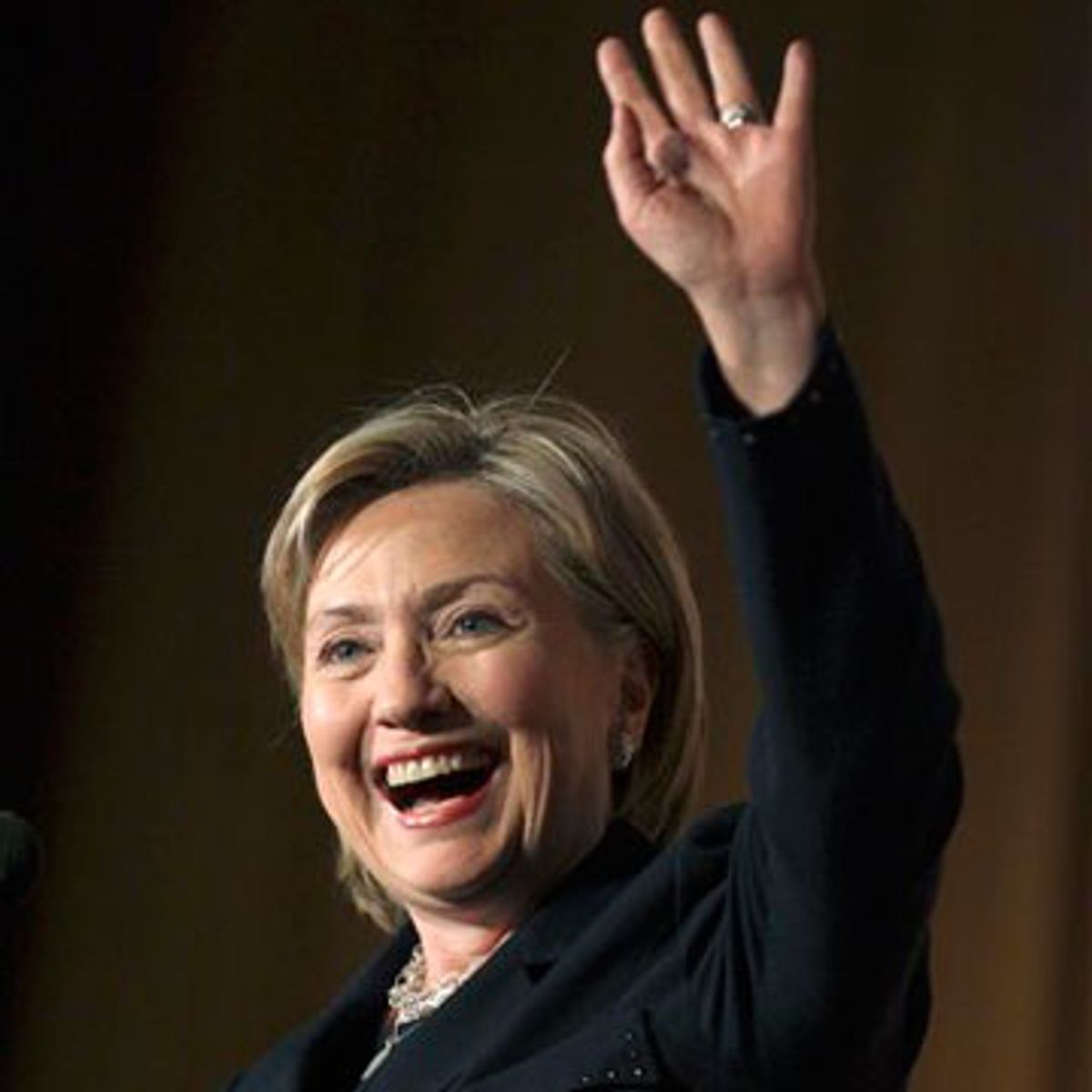 When feminists gathered on Sunday afternoon for the gala luncheon celebrating Emily's List and the inauguration of our new president, it could have been a little awkward. Emily's List, after all, is the 24-year-old organization dedicated to increasing the presence and power of women in politics. And the new president is not the woman many of these supporters had worked and sweated and cheered and campaigned and donated through the nose for over the past two years. He is not the woman they had hoped to be feting this January.

Yet thanks to to Ellen Malcolm (perhaps the political world's most cheerful ball-buster), a roster of 2008's biggest lady winners and a rousing speech by Hillary Clinton herself, the luncheon turned out to be a feel-good celebration. And even without much mention of the failed presidential march of the still-senator from New York, the event was yet another in a string of recent moments in which we got to see the new Hillary Rodham Clinton: Toughened, burnished and somehow fortified by her loss, she is taking on the role not only of secretary of state, but of a reanimated, reborn, rollicking feminist superhero.

The luncheon was hosted by Malcolm, a deeply appealing political macher who somehow managed -- through gusto, denial, wheedling or simple gut-busting -- to convince even her most disgruntled post-Hillary compatriots to get out to the polls. And vote they did. As Malcolm slyly reminded her audience, 8 million more women marked the ballot for Barack Obama than did men.

And while those ladies were at the polls, they also voted for some of the newly elected female officials, who helped make the 2008 elections one of the best years for female candidates (executive branch excluded) in 16 years. Twelve new pro-choice Democratic women joined the House of Representatives this month, while Jeanne Shaheen in New Hampshire and Kay Hagan in North Carolina both won Republican seats in the Senate, both becoming the first Democratic women to represent their states.

Malcolm's event was a testament to these advances, with a politically star-studded roster of speakers that demonstrated the power and reach of Emily's List.

The luncheon began with a video that carefully told the story of this election year, beginning with the voice and image of Barack Obama inspiring a crowd, then moving through a series of women's victories. When Clinton appeared on the screen, the crowd cheered, but the clip showed her not as a candidate, but vigorously endorsing Barack Obama and Joe Biden.

Then Malcolm took the stage: "George W. Bush is going back to Texas and Barack Obama is president of the United States," she shouted. The crowd roared; it felt good. Even when Malcolm cautioned, "Make no mistake ... for every woman in Congress there are still more than five men," the energy was positive and forward-looking -- to the Lily Ledbetter equal pay legislation, and the SCHIP program that will insure millions of American children.

House Speaker Nancy Pelosi warmed up the crowd with her trademark "Isn't this exciting?" purr of low-grade girl-power. After acknowledging many of her House colleagues in the audience, Pelosi pointed out that "without so many women members of college, there would never have been, at this time, the first woman speaker of the House." (That's her! ) Following Pelosi, Secretary of Homeland Security-designate Janet Napolitano (described by Malcolm as "the kind of person you'd like to have a beer with") argued that "women's issues are everyone's issues."

Wisconsin Rep. Gwen Moore knocked the noshers on their asses with a heartfelt tribute to Pelosi, whom she said "is not only stomping out injustice, but stomping it out in 4-inch heels!" before banging a high-heeled shoe on the podium. Malcolm paid tribute to departing Emily's List executive director Ellen Moran, who is leaving to become the White House communications director, by showing a spoof video of the West Wing credits.

In a terrific speech, brand new North Carolina Gov. Bev Perdue told a story of goggle-eyed media interest in her, "the first pro-choice female governor in the South since Ann Richards," and in a state where the first bill proposing to give women the right to vote, in 1897, "was consigned to the committee on insane asylums." At inaugural festivities, Perdue reported, a member of the press "had the audacity to ask me about the redecorating plans." The crowd whooped. Perdue went on to describe a plaque, hanging outside the Governor's Mansion, that "welcomes visitors to the home that was recently renovated for the governors and first ladies of North Carolina." Perdue paused for effect. "I intend to redecorate that plaque."

But you could tell: Everyone was really waiting for Hillary. Really. She had flown in late from New York, and was now stuck in traffic, trying to get to the Hilton while Perdue, North Carolina Sen. Kay Hagan and New Hampshire Sen. Jeanne Shaheen vamped for time by telling stories of how they used to make their state troopers carry their pocketbooks (Shaheen) and their discoveries that only men are allowed to swim in the Senate gym's pool (Hagan).

And still, Clinton wasn't there. So Ellen Malcolm returned, commencing a remarkable off-the-cuff monologue that touched on redistricting, Emily's List's plans for 2010, the importance of stopping filibusters, and the upcoming fights for Rahm Emanuel and Hilda Solis' seats -- finally threatening to start telling summer camp stories.

"So, listen, have I mentioned women voters yet?" Malcolm was joking when an aide yelled to Malcolm that Clinton "was walking." The image was suddenly very evocative of the inauguration 16 years ago, when the Clintons had gotten out of their car and walked part of the route to the White House. Could Hillary really be hoofing it up Connecticut Avenue to get to her crowd of women?

It was too cinematic to be true -- she was just walking into the ballroom. But when she did, the room practically levitated.

Introducing her very late guest, Malcolm called Clinton "an exceptional figure in American life," a "powerful role model for women for our country and for the world." And what's remarkable about that praise is that here in 2009, it is absolutely true. Hillary Clinton, who was a sore spot for so many feminists for so long, even through her presidential campaign, has made a glorious phoenix flight out of her failed presidential campaign.

Though few luncheon speakers had made mention of Clinton's presidential hopes during the lunch, it was clear that when the Emily's List crowd stood to applaud her, they were not simply applauding a future secretary of state, but a woman who made history, who banged against walls that would give the best of us headaches, who did the grueling, probably painful work of being the first female presidential candidate so that others who come after will not have to repeat it. After all of the sniping and anger and hurt that was unleashed during Clinton's campaign against Barack Obama, it felt somehow right to see a ballroom full of people stand up to honor her.

And Clinton knew it. Unlike candidates who crumble after bitter losses, Clinton's sense of herself and her politics and her priorities seems only to have grown stronger since her June concession. She nimbly shifted gears and became an Obama warrior, even when many of her supporters threatened not to follow her down the path. Now, as evidenced by her great testimony during her confirmation hearings last week, she is entering yet another phase of her political life -- rediscovering an older iteration of herself, one we haven't seen in full bloom since the late '90s: the Hillary Rodham Clinton dedicated to fighting for women around the world.

The Hillary Clinton who attended the women's conference in Beijing, the one who famously said that "women's rights are human rights," the one who spoke up against the treatment of women by the Taliban, the one who got lost in a muggy stew of sex and Ken Starr, the one who was discarded in favor of a slicker bipartisan figure during her Senate tenure: She's back! This time with fewer hairbands, and more confidence in herself.

Clinton did acknowledge her own presidential hopes, calling it an "honor to run for president," and thanking Malcolm for having changed "the face of American politics ... and the wardrobe. Every year there are more pantsuits of all kinds." She also thanked the crowd, which contained many of her most die-hard supporters, for their kind wishes and messages, and noted that her famous "18 million cracks [in the glass ceiling] are very personal."

But she did not linger on her own recent history. She immediately jumped to other ceilings holding back women and girls around the world: "When women are vulnerable to economic, political and social marginalization, the potential for advancing democracy, prosperity and security is also vulnerable. " This was the smart and fierce thinker who had moved into the White House with her husband in 1992 and immediately belly-flopped with a massive healthcare plan that is now a model for healthcare reform. "I believe it is essential in renewing America's leadership around the world, that we renew America's leadership on behalf of women and girls," said Clinton, and the audience bellowed their approval.

This was the woman who had long refused to take her husband's married name, who had made ungainly but honest comments about not staying home and baking cookies -- but now,  all (or most) of the disjointed ugly-duckling of the past was gone. This is a woman who knew she had just made history, that she had a crowd eating out of her hands, a woman who has finally come into herself in a blaze of popular, political feminist glory. And sure, it was a perfect crowd, but a lot of this was stuff she'd said to the whole country just last week.

Speaking of the criticism she received from Taliban leaders for speaking out on behalf of women in Afghanistan in the '90s, Clinton said pointedly, "I wear that, along with much of the rest of the criticism I've received, as a badge of honor." And so, with a happy crowd of cheering people, Clinton said, "I am absolutely thrilled to stand with you in the fights we have waged together. We've won some and we've lost some."

And some of the losses are looking more like wins every day.