At Sundance, a star-studded, utterly deranged gay love story caps the opening weekend. But a dazzling tale of girlhood in '60s London steals the show. 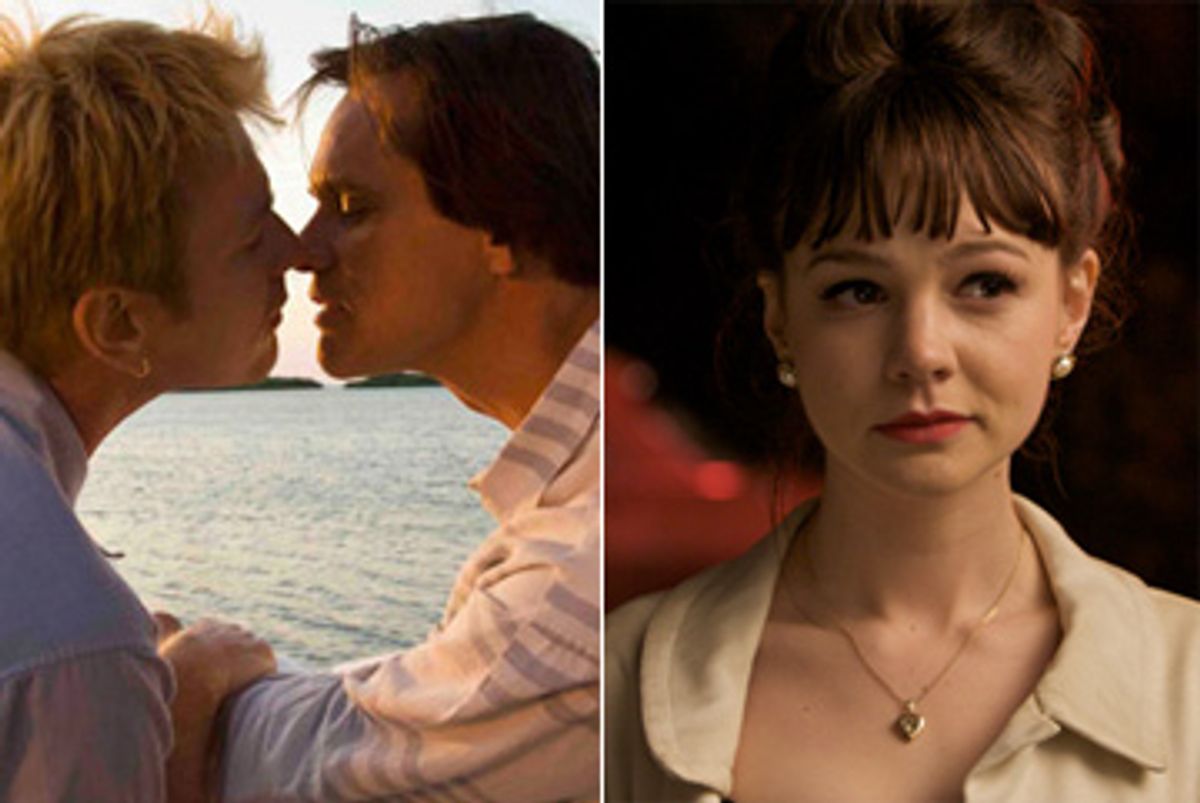 Ewan McGregor and Jim Carrey in "I Love You Phillip Morris," (left) and Carey Mulligan in "An Education."

PARK CITY, Utah -- From somewhere in the middle of the 1,300 people packed into the Eccles Center here after the premiere of "I Love You Phillip Morris," somebody yelled out to Jim Carrey, "What was it like to kiss Ewan McGregor?" Wearing clunky, '70s-style glasses and his trademark pert expression, Carrey considered this with the attentive manner of a hunting hound. I wanted him to ask the questioner why every single straight actor who ever plays a gay character has to be asked the same stupid thing, but he didn't. Like all celebrities Carrey seeks to remain genial but vague in his interactions with civilians. Then a response came to him. "A dream come true!" Carrey crowed. "I mean, look at the guy!"

That got the audience eating out of his hand like tame reindeer at Santaland, and then a moment later it got better. Someone else asked a rambling, accusatory question that went something like this: OK, you made a completely crazy but compassionate film in which you and McGregor play lovers, but how are you serving the LGBT community as allies? Carrey and McGregor looked at each other; would either one rise to this bait? Toothy smile unwavering, and then Carrey stepped forward again. "I'll tell you how I'm serving the gay and lesbian community," he said. "With love and tolerance and treating everyone equally." The place fell apart. Such is the power of celebrity: An ordinary human response becomes a veritable utterance of Jesus.

It's been an exceptionally strong opening weekend at Sundance, long on themes of sexual exploration and on eccentric but well-constructed entertainment, rather than the downbeat minimalism or naturalism of recent years. On all those counts, "I Love You Phillip Morris" was a highlight or lowlight, depending on how you look at it. Although the film premiered here on Sunday night to an ecstatic reaction, it's also likely to spark some strongly negative reactions out in the real world. although it's impossible to know how far that will translate to a real-world audience.

Written and directed by "Bad Santa" screenwriters Glenn Ficarra and John Requa, "I Love You Phillip Morris" tells the unbelievable but somewhat-true story of Texas con man Steve Russell (Carrey's character), a onetime police officer whose long-running love affair with the eponymous Phillip (McGregor) led him to commit any number of outrageous criminal scams. Perhaps because Russell's story defies all logic, the movie refuses to follow any normal narrative conventions, becoming a pell-mell, can-you-top-this odyssey beyond madcap farce into total derangement. It's like a Coen brothers movie, if Joel and Ethan did a ton of crank and decided to flush story structure down the crapper.

Within the first 15 minutes, Steve goes from being a married, Christian cop in Virginia to a gay playboy in Miami Beach to a prison inmate in Texas, which is where he meets Phillip. At least I think it's Texas -- Steve goes to prison so many times in so many places (and then escapes) that I can't keep it all straight. Whether you find this dizzying pace invigorating or just exhausting will pretty much determine your reaction to the film. I was on the fence; I admired Ficarra and Requa's blend of glossy Hollywood surface and dirty-minded, chaotic, criminal love story, but I also felt beat up by the end of the film. Then again, it was my fourth film of the day and I was flying on very little sleep and inadequate nutrition. This is a movie to see when well-rested and healthy.

You could say that adjusting to Steve's pace -- and particular pitch of insanity -- is the key question for Phillip too. McGregor gives a rather sweet performance, playing him as a shy, mellowed-out Southern boy who knows next to nothing about his boyfriend's various fraud and embezzlement schemes, impersonations of attorneys, prison escapes and efforts to fake his own death. He simply gets overwhelmed by Carrey, who gives perhaps the most amped-up and overcommitted performance of his amped-up and overcommitted career. He's great and he takes enormous chances and he's kind of too much, which I guess is how I feel about "I Love You Phillip Morris."

You could well ask what big stars like Carrey and McGregor are doing at the alleged hotbed of independent film in the first place, and perhaps the peculiar but powerful sexual chemistry between them in "I Love You Phillip Morris" is one answer to the question. Sure, there have been plenty of straight-playing-gay movies by now, but I can't think of another one that strives to be so trashy and hot. On a larger level, though, this has been a festival rooted in strong acting and propulsive storytelling, and even in films that embrace their own artificiality. For whatever combination of aesthetic and sociological reasons, it's as if the "new American realism" of the last two years -- which has never much interested the public -- has simply vanished.

If films like "I Love You Philip Morris" and the Ashton Kutcher gigolo drama "Spread" and the cop opera "Brooklyn's Finest" were the obvious big events at Sundance this weekend, there's no movie in this festival that's quite as ravishing, as witty, as well-acted or as satisfying overall as "An Education," an early-'60s London coming-of-age fable from writer Nick Hornby and director Lone Scherfig. (This is a surprise of a different sort, in that Sundance has only started to become a major showcase for non-American films.) In a performance of Audrey Hepburn-esque starmaking intensity, young English actress Carey Mulligan plays 16-year-old Jenny, a precocious student, talented cellist and aspiring woman of the world who's trapped in the middle-class suburban dreariness of Twickenham, circa 1961.

As writer Hornby (the author of "High Fidelity" and "About a Boy") explained after the vastly oversold downtown screening I attended, England in the early '60s wasn't yet, you know, '60s England. When Jenny meets a charming and handsome older guy who we can instantly tell is bad news, he knows about jazz and Ravel and art auctions and supper clubs and weekends in Paris; Carnaby Street and Twiggy and Brian Jones are still in the future. David, the smooth operator, is played by Peter Sarsgaard, who does such a good Ewan McGregor I convinced myself he was McGregor for a while.

David is in the vicinity of 30 and drives a sports car and has nice clothes and knows "colored people." He tells outrageous lies and charms Jenny's parents and gradually steers her off her track of Oxford-bound academic excellence and onto one of his own devising. On one hand, clearly a bad idea. On the other, as Jenny demands of her school headmistress (a forbidding cameo for Emma Thompson), what the hell can Oxford do for young women in profoundly unliberated early-'60s England? A long, dull grind of study followed by a long, dull grind behind a desk at spinsterish jobs like hers? At least hanging out with David is fun.

You could say that there's nothing surprising in the oft-told tale of the seducer and the schoolgirl -- hanging out with David is indeed fun, until the dynamic between them begins to shift subtly -- but this one's told superbly, with heart, humor, a marvelous supporting cast and a dazzling recreation of a long-lost, pre-Mod London. It's a movie with many wonderful small moments, courtesy of Alfred Molina as Jenny's dad or Dominic Cooper as David's more cautious best friend or the beautiful Olivia Williams as Jenny's favorite teacher. Fundamentally it belongs to the irresistible Mulligan as Jenny, a mouthy, awkward, almost-sexy combination of innocence and wisdom. You almost never see movies about teenagers that treat them with this much respect; sure, Jenny is governed by her hormones and her half-realized dreams of the future, but she's also much smarter than the grownups around her. As her relationship with David grows murkier, it becomes less and less clear which one is the adult and which the child.

Among the other premieres I don't have time to elaborate on right now: Paul Giamatti plays himself (without his soul) in Sophie Barthes' gloomy and peculiar Charlie Kaufman-meets Kubrick farce "Cold Souls," which posits a new craze among affluent New Yorkers: offloading your soul into cold storage and/or buying someone else's, perhaps smuggled in from Russia. Joseph Gordon-Levitt and Zooey Deschanel are a charming not-quite couple in "500 Days of Summer," a neat twist on the romantic comedy that wears out its welcome with too much "Garden State" meets "Juno" cuteness. Gael García Bernal and Diego Luna reunite for the comedy "Rudo y Cursi," which is very funny in patches. Given that it's a farcical satire about A) soccer and B) contemporary Mexican culture, two things Americans don't know or care much about, it's likely to be a big hit among Latino audiences and little seen elsewhere.