With the real celebrities

Denzel, Diddy, Jay-Z and Beyonce are left alone while inauguration crowds flock to history makers like the Tuskegee Airmen. 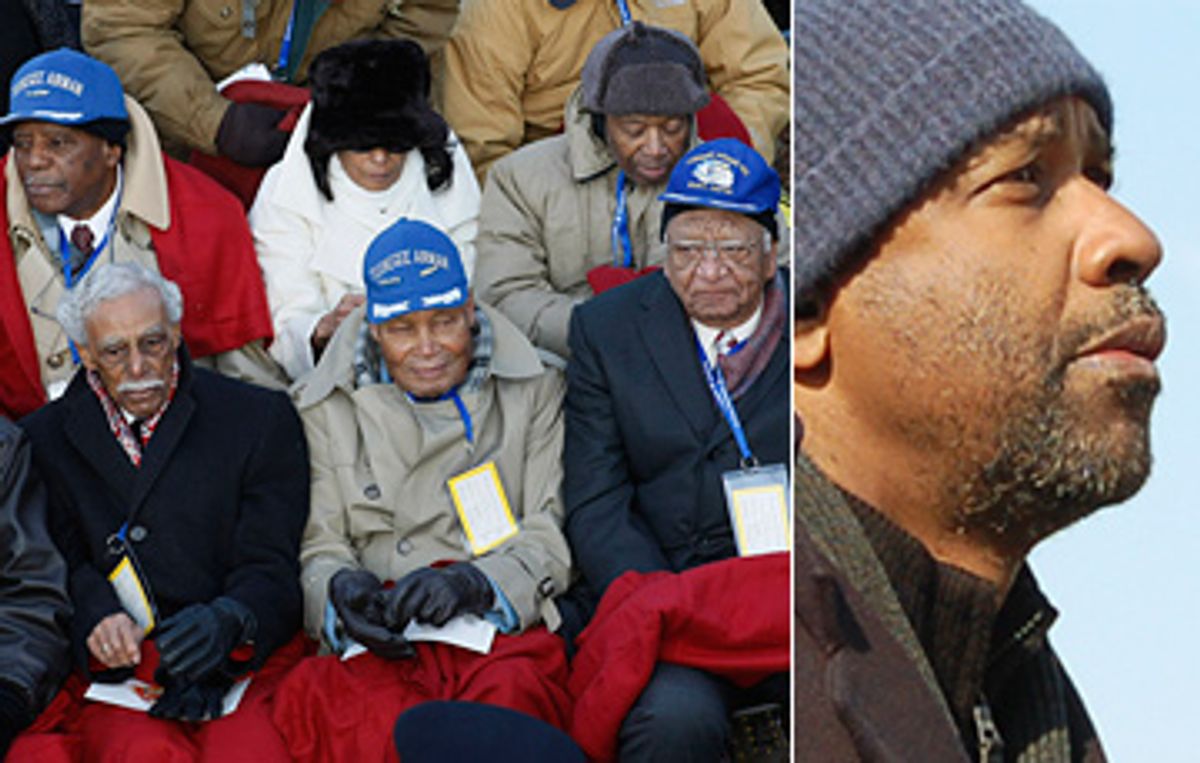 Seventy-nine-year-old Ezra Hill of Hampton, Va., leaned on a cane as he walked through the crowd a few minutes before Barack Obama's inauguration. Dressed in a bright red Tuskegee Airmen jacket, he was carrying the book he wrote on his experience as part of the legendary black squadron of WWII fighter pilots, "Black and Red Angels." He wanted to give it to incoming Education Secretary Arne Duncan.

Hill was part of a delegation of surviving Tuskegee Airmen Obama invited to the inauguration. Many were frailer than Hill, a few bundled in wheelchairs, but they all looked happy. "We flew 200 missions and we never lost a bomber," Hill said. But the Airmen took off from and landed at separate European bases from their white American counterparts. "We flew alongside them in the air, but then we went our own way." Now he was watching the inauguration of our first African-American president -- "My commander in chief," Hill noted proudly.

It was a measure of the day that people mobbed Hill to have their photos taken with him and shake his hand, but mostly left Denzel Washington, sitting in a blue knit cap a few rows away, alone to chat with his friends (while camera shutters clicked from a polite distance). Nearby, a few people had photos snapped with Diddy, but Beyoncé and Jay-Z (he of the huge chestnut mink hat) were left to sit quietly by themselves just a few rows behind. People enjoyed the celebs in their midst, but for the most part, history makers were the real celebrities today. Even Dianne Feinstein was uncommonly eloquent, hailing the civil rights leaders "who marched and died to make this day a reality."

Rick Warren gave an innocuous invocation and he wasn't booed; but he got almost zero applause. (When George Bush and Dick Cheney were announced, the crowd on the mall behind me broke out in a chorus of "Na na na na, hey hey hey, goodbye.") Everyone went wild for Aretha Franklin, who turned "My Country Tis of Thee" into soul music. But there was nothing like the crowd's first glimpse of the Obama family approaching together as Chief Justice John Roberts prepared to (bumpily) swear in the new president. The Obama girls, Malia dressed in royal blue and Sasha in peach, were almost unbearably cute; my face hurt from smiling.

There were tears in many eyes when Obama began his speech. Though he thanked Bush "for his service to our nation," the entire address amounted to a pledge to unravel most of the damage of the last eight years, like a non-satiric Stephen Colbert at the White House Correspondents Dinner. "We reject as false the choice between our safety and our ideals," Obama told the crowd. "Those ideals still light the world, and we will not give them up for expedience's sake." Behind me two women yelled, "Thank you!" He promised "to restore science to its rightful place" and warned that "a nation cannot prosper long when it favors only the prosperous." Obama got perhaps the biggest applause when he noted that "a man whose father less than 60 years ago might not have been served at a local restaurant can now stand before you to take a most sacred oath." Denzel and Diddy stood clapping throughout the whole speech and nobody asked them to sit down.

The Rev. Joseph Lowery brought back the '60s with a benediction that prayed, to much laughter, "Lord, we ask you to help us work for that day when black will not be asked to get back, when brown can stick around, when yellow will be mellow, when the red man can get ahead, man, and when white will embrace what is right." Then the crowd, even some reporters, joined in a fervent rendition of "The Star Spangled Banner." I sometimes feel moved to sing it at baseball games, but it's never sounded like this.

The diversity in some of the best seats for the inauguration was a pleasure to see. Yes, there were congressional wives and a fair number of celebrities nearby, but also families with babies and a large contingent of teachers with children. Lynn Jones of Arcata, Calif.'s Sunnybrae Middle School was ecstatic to find that the tickets her group secured through Sen. Feinstein were near the front of the basin crowd, with a great view of Obama's speech. "We're just so thrilled to be up here, we couldn't believe it."

I hiked away from the Capitol in a happy multiracial crowd, unbelievable numbers of families and a remarkable number of people in wheelchairs. Nobody rushed anyone. I reunited with my daughter at the packed Le Bon Cafe, on 2nd and Pennsylvania, which had wireless service and the nearest coffee to the Capitol. There was a line out the door; happy people were sharing crowded tables (in the two hours I was there, we met people from Boston, Detroit, Los Angeles and Madison, Wis.). When we got inside, Dr. Arnett Girardeau, 80 years old in a blue Obama cap, kindly invited us to share his table. I asked him what he thought about the day's events. "I never thought I'd live to see it," he said. "You know, when Barack talked about his father not being served in some restaurants here 60 years ago, he was talking about me," Girardeau said. "I was a freshman at Howard University in 1947, and there were still separate accommodations here."

Girardeau became a dentist and lived in Washington until 1962, when the civil rights movement called him home to Jacksonville, Fla. "We were still having Klan riots then," he told me. He became the head of the local NAACP, then a state senator from 1982 to 1992. When Obama declared his candidacy, "I didn't think he had a snowball's chance in hell," Girardeau confessed. He was leaning toward Hillary Clinton until Iowa. "When white people in Iowa voted for him, I thought, I've got to be with him. I felt bad for Hillary, and I wanted her to be his vice president -- when he picked Biden, I told my wife, 'He just lost the election; he'd have won with Hillary.'" Girardeau chuckles. "What do I know?"

"I'm just so happy I lived to see it. I'm more proud of the American people than anything." Then Girardeau said goodbye, and made his way back to his hotel. He'd enjoyed the Florida State Ball on Monday night, but he had no plans for Tuesday. "I saw what I came to see."