With goodwill behind him -- and crisis ahead -- it's time for the incoming president to show us what he's got. 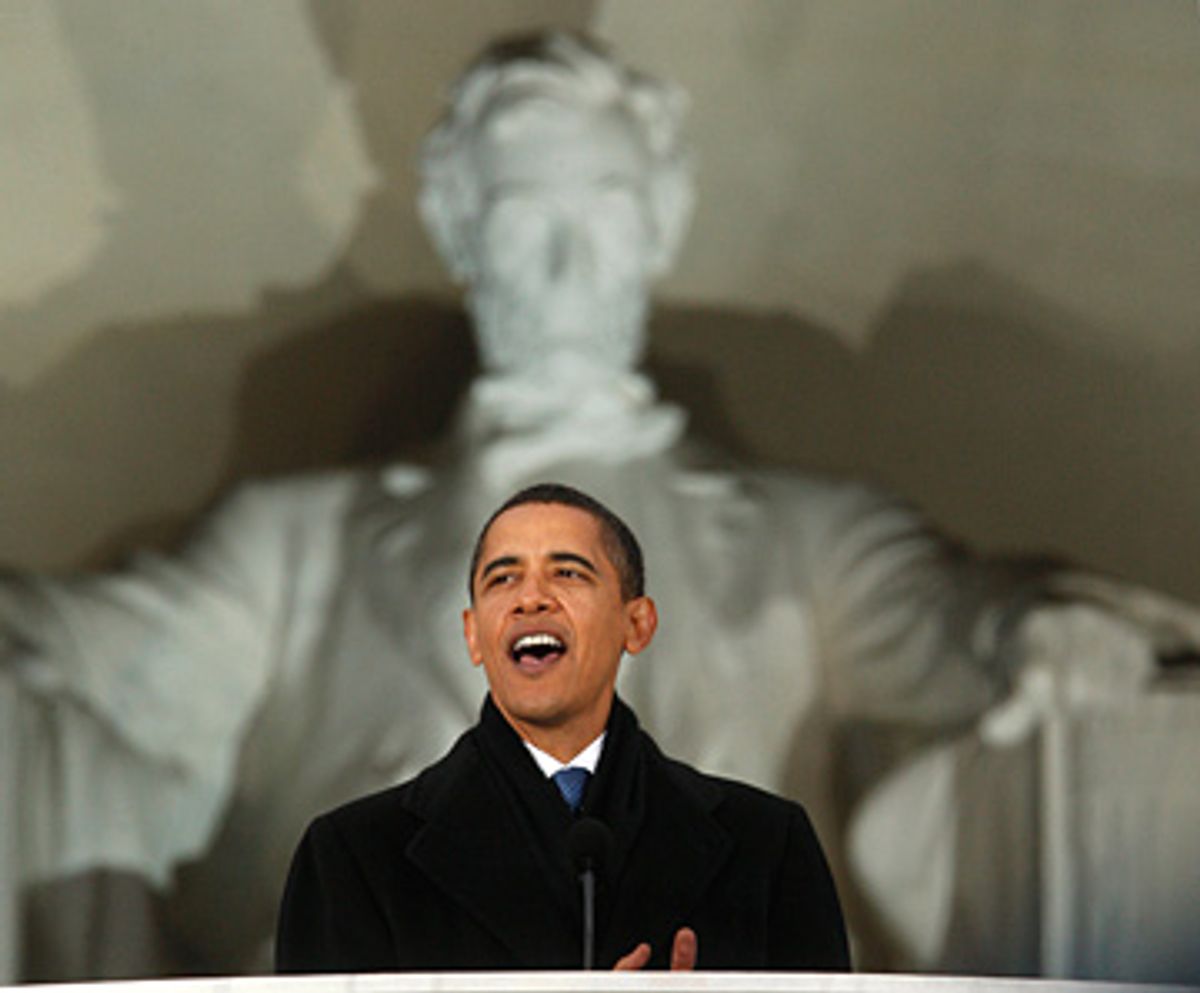 The problem with being the guy who made his name by giving the best speech at the 2004 Democratic National Convention is that Barack Obama has a pretty high bar to aim for with his inaugural address on Tuesday. Then again, the nice thing about being the 44th president of the United States is that no matter what he says, Obama will give billions of people around the world something to cheer about Tuesday -- by the simple act of taking over from the 43rd.

Shortly before noon, Obama will take the oath of office to become the chief executive of a nation pulled in two directions: despair over the state of the economy, the 6-year-old war in Iraq and the apparent leadership void in Washington, bumping up against what pollsters say is an unprecedented hope and optimism invested in the new president. The moment calls for both soaring rhetoric and a stark recognition of the challenges that lie ahead. As one of his predecessors might have put it, the only thing Obama has to fear is unrealistic expectations of how quickly his administration can turn things around. On top of the crisis the country faces, there's also that small matter of Obama being the first African-American president in U.S. history -- inaugurated the day after Martin Luther King Day was observed. (You may have heard something about that.)

"It's a really difficult path that he is navigating," said Peter Hart, a Democratic pollster who co-produces the NBC/Wall Street Journal poll with Republican Bill McInturff. Their latest survey, released last week, showed 59 percent of the country thinks it's heading in the wrong direction -- and 57 percent think the recession will last another year to three years. But the same poll also found 66 percent of people were either "optimistic and confident" or "satisfied and hopeful" that Obama would do a good job fixing the mess. "On the one hand, you have to make [the speech] serious enough and important enough that the public wants to have money spent and that they're wiling to open the purse strings of the United States," Hart said. "At the same time, he doesn't want to make it so dire that the public says, 'Well, we have to go into some kind of economic bomb shelter.'"

Obama's communications team showed, time after time during the campaign, that they were able to hit the right notes for the moment. Jon Favreau, his wunderkind chief speechwriter, and David Axelrod, a senior advisor, reportedly started working on the speech with Obama around Thanksgiving, and -- as with most of Obama's major speeches -- they have passed several drafts back and forth to the president-elect since then. Still, writing the speech isn't a task many people who aren't involved in it say they envy. "As a speechwriter, there's no way to write to the [historic moment] -- it's impossible," said Josh Gottheimer, a former speechwriter for Bill Clinton who helped write Clinton's farewell address eight years ago. But the very fact of Obama's inauguration is so momentous that it almost doesn't matter what he says, to some extent. "What you write doesn't make history," Gottheimer said. "The history makes your speech."

The last few days have provided a pretty good preview of what Obama may say. "What you will hear is [this is] a time and a place in which we all have ... responsibility," Rahm Emanuel, who will become Obama's White House chief of staff Tuesday, told NBC's "Meet the Press" on Sunday. "To regain America's greatness and continue to move forward and be an example around the world ... its leaders must also lead by example." Already, during his whistle-stop tour of the East Coast on Saturday and at Sunday's concert at the Lincoln Memorial, Obama was hitting some of those themes.

"I won't pretend that meeting any one of these challenges will be easy," Obama told about 400,000 people who came to the concert. "It will take more than a month or a year, and it will likely take many. Along the way there will be setbacks and false starts and days that test our fundamental resolve as a nation. But despite all of this -- despite the enormity of the task that lies ahead -- I stand here today as hopeful as ever that the United States of America will endure -- that the dream of our founders will live on in our time."

As advertised during the campaign, the Obama administration does plan to hit the ground running. The transition went very smoothly through the end of 2008, and had only a few momentary stumbles in the first three weeks of 2009; an episode like the revelation that Treasury Secretary-designate Tim Geithner failed to pay taxes years ago became a mini-scandal on cable news, largely due to the lack of any other major missteps. The new White House aides will move in and start working Tuesday, even as Obama sits in a reviewing stand on Pennsylvania Avenue and watches the inaugural parade. There's a lot to do -- Obama wants Congress to finish work on his economic stimulus package (which the White House, and Democrats on Capitol Hill, are calling the "American Recovery and Reinvestment" plan, in a nifty bit of message discipline) by the middle of next month.

The White House may have some time before aides need to show dramatic results, though. "People are very hopeful, and they're optimistic that he's going to be able to make major changes, but they don't expect it to happen any time quick," said Democratic pollster Mark Mellman. "People know that George Bush has so ruined the country that it's going to take a long time to fix it." (This may be as good a place as any to note that outgoing White House press secretary Dana Perino told reporters at a Christian Science Monitor breakfast on Friday that she couldn't understand why all the news stories on the transition had to mention how unpopular Bush was. That probably doesn't need any comment.)

By most measures of public opinion, Obama will come into office with more goodwill built up with his constituents than any of his recent predecessors. Even Ronald Reagan, who won a landslide victory in 1980, didn't unite the country behind him in 1981 in the same way Obama appears to have done. Tuesday will mark, inevitably, the beginning of the end of his honeymoon; there's no easier way to look good than to be the one waiting in the wings to take over from George W. Bush. But it will also mark the first time Obama truly wields the full rhetorical power of the presidency. With the challenges he faces, he's going to need it.