"A new era of responsibility"

Mixing straight talk about dire times with lofty rhetoric about hope and determination, Obama repudiates Bush and vows to get to work. 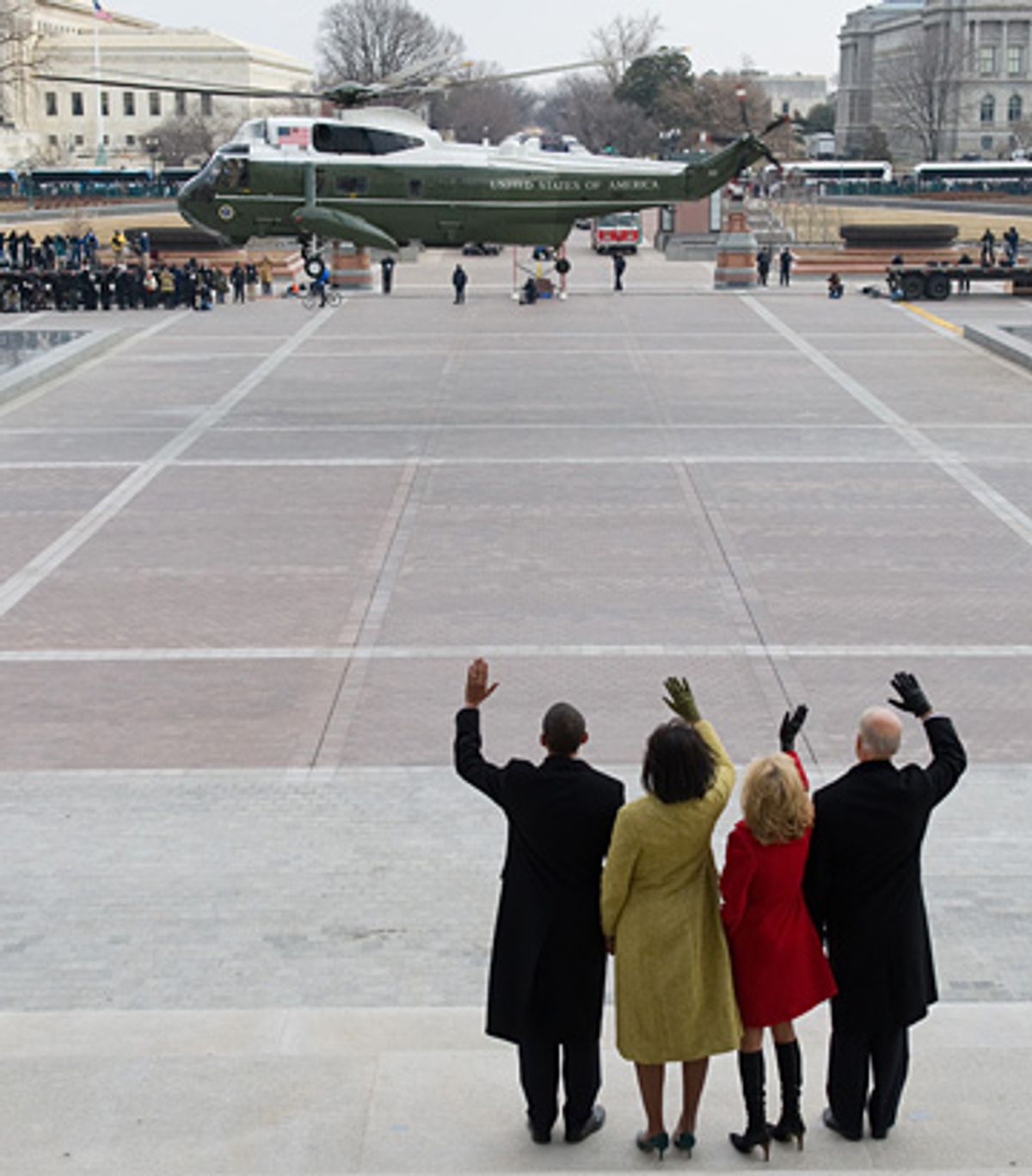 Sometimes, it's best to go with just the facts: Barack Hussein Obama became the nation's 44th president Tuesday, and its first black president, taking the oath of office in front of an enormous, joyous crowd that swarmed the national Mall and overflowed into the frigid streets of the capital. After eight years, his predecessor, George Walker Bush, left Washington, heading back to Texas to await the judgment of history (which he says he still believes, stubbornly as ever, will be kinder than that of his contemporaries).

Obama gave an inaugural address that aimed for balance between the hope that powered his campaign and the stark reality of what lies ahead. It began with ringing rhetoric, drifted a bit toward the policy-specific wonkiness of a State of the Union speech in the middle, and then steered back to inspiration by the end. But it almost didn't matter if he'd stood up at the podium and recited the alphabet; the moment was moving, well before he spoke. And the crowd that gathered here, and the millions more who watched around the world, was just thrilled he had finally taken power.

"Forty-four Americans have now taken the presidential oath," Obama said. "The words have been spoken during rising tides of prosperity and the still waters of peace. Yet, every so often the oath is taken amidst gathering clouds and raging storms. At these moments, America has carried on not simply because of the skill or vision of those in high office, but because we the people have remained faithful to the ideals of our forbearers, and true to our founding documents. So it has been. So it must be with this generation of Americans."

There have been worse crises in American history at the start of presidential terms; the nation isn't on the verge of dissolving, as it was when Lincoln took office (though Obama has clearly found great inspiration in the example of his predecessor from Illinois), and it isn't already mired in the horrors of the Great Depression, as it was 76 years ago when Franklin Roosevelt took the oath (though books about FDR's first 100 days were practically required reading for members of the Obama transition team in the months since the election). But this is about as bad it's been on any Jan. 20 in Obama's lifetime. The country is mired in a war in Iraq that it probably should never have started and that is proving difficult to end. Another war in Afghanistan, which was launched to avenge the 9/11 attacks, sputtered and foundered, without attention from the Bush administration, into a similar mess. The economy collapsed so quickly in the fall that it seemed that even the prosperity that the very rich had enjoyed over the last few years was built on a house of cards; as Wall Street sought government bailouts, the wealthy finally discovered what much of the rest of the country had already been going through for a while. Obama's calm promise to try to fix things helped him win the election.

Once sworn in, he didn't shy away from sketching out the trouble we're in -- and he made clear he believes we're all in it together. The speech, like so much of his campaign, reflected the communitarian spirit that led him to organize on Chicago's South Side as a young man. As president, it seems he'll try to be -- as Sarah Palin once put it, sneeringly -- a community organizer, with actual responsibilities. "What is required of us now is a new era of responsibility -- a recognition, on the part of every American, that we have duties to ourselves, our nation, and the world, duties that we do not grudgingly accept but rather seize gladly, firm in the knowledge that there is nothing so satisfying to the spirit, so defining of our character, than giving our all to a difficult task," Obama said. "This is the price and the promise of citizenship."

But he tempered the dire assessment with some reassurances. In the same measured, self-confident tones that carried him through the campaign (and sometimes drew flak from people who thought his calm was too cold), Obama aimed for a sort of echo of FDR's first inaugural address, with its "only thing we have to fear is fear itself" line. "The challenges we face are real," he said. "They are serious and they are many. They will not be met easily or in a short span of time. But know this, America -- they will be met. On this day, we gather because we have chosen hope over fear, unity of purpose over conflict and discord."

For Bush, sitting right behind Obama throughout, the speech might have been uncomfortable (though he says he doesn't dwell too much on what people say about him). A lot of the text was a blunt repudiation of Bush's legacy. "We reject as false the choice between our safety and our ideals," Obama said. "Our Founding Fathers, faced with perils we can scarcely imagine, drafted a charter to assure the rule of law and the rights of man, a charter expanded by the blood of generations. Those ideals still light the world, and we will not give them up for expedience's sake." Living up to that promise may not be as easy as making it -- Obama has already said closing the prison at Guantánamo Bay might be more complicated than he thought -- but hearing the president even attempt to reconcile the recent conflict between U.S. behavior and U.S. ideals was a shock, after years of blithe declarations that terrorists don't have human rights.

The rest of the ceremony was a celebration. The Rev. Rick Warren, whose inclusion shook so many of Obama's supporters, managed to restrain himself and avoid decrying the perfidiousness of gays and lesbians for the duration of his invocation. He actually seemed to be striving for a more inclusive tone than ever before, referring to Jesus by the Hebrew, Arabic, Spanish and English version of his name. (Obama did him one better, noting that the U.S. is a nation of "Christians and Muslims, Jews and Hindus -- and non-believers.") Aretha Franklin wrung more soul out of "My Country Tis of Thee" than generations of elementary school music teachers would have ever imagined possible. Chief Justice John Roberts -- swearing in a man who voted against confirming him to the Supreme Court -- flubbed the words to the oath of office. Obama just paused and looked at him, as if to say, "Really?" The Rev. Joseph Lowery, a civil rights hero who -- unlike Warren -- doesn't believe in denying those rights based on sexual orientation, turned his benediction into a teasing rhyme: "We ask you to help us work for that day when black will not be asked to get in back, when brown can stick around, when yellow will be mellow, when the red man can get ahead, man; and when white will embrace what is right."

Despite Lowery's presence, and despite the historic nature of the inauguration of the first black president of a nation built with the proceeds of African slave labor, the day didn't exactly wrap itself in the banner of the '60s civil rights movement. Obama tried throughout the campaign for a post-racial kind of appeal to anyone who would join his movement, and on Tuesday, he nodded at the powerful meaning of what he'd achieved, without making his race seem to be his only salient characteristic. "This is the meaning of our liberty and our creed," he said. "Why men and women and children of every race and every faith can join in celebration across this magnificent mall, and why a man whose father less than 60 years ago might not have been served at a local restaurant can now stand before you to take a most sacred oath."

By the time Obama was halfway through his speech, shortly after noon, a switch had been flipped somewhere on the Internet, and WhiteHouse.gov became Obama territory. "Change has come to America," the Web site declared, and the smiling face greeting visitors on the intro page was no longer the familiar old smirky Texan, but rather -- as Obama put it four years ago -- that of "a skinny kid with a funny name who believes that America has a place for him, too." That place, it turns out, is in the White House. Only in America.