Confusion, anger and relief swirl inside the Gitmo courthouse before the the tainted proceedings are halted at Obama's request. 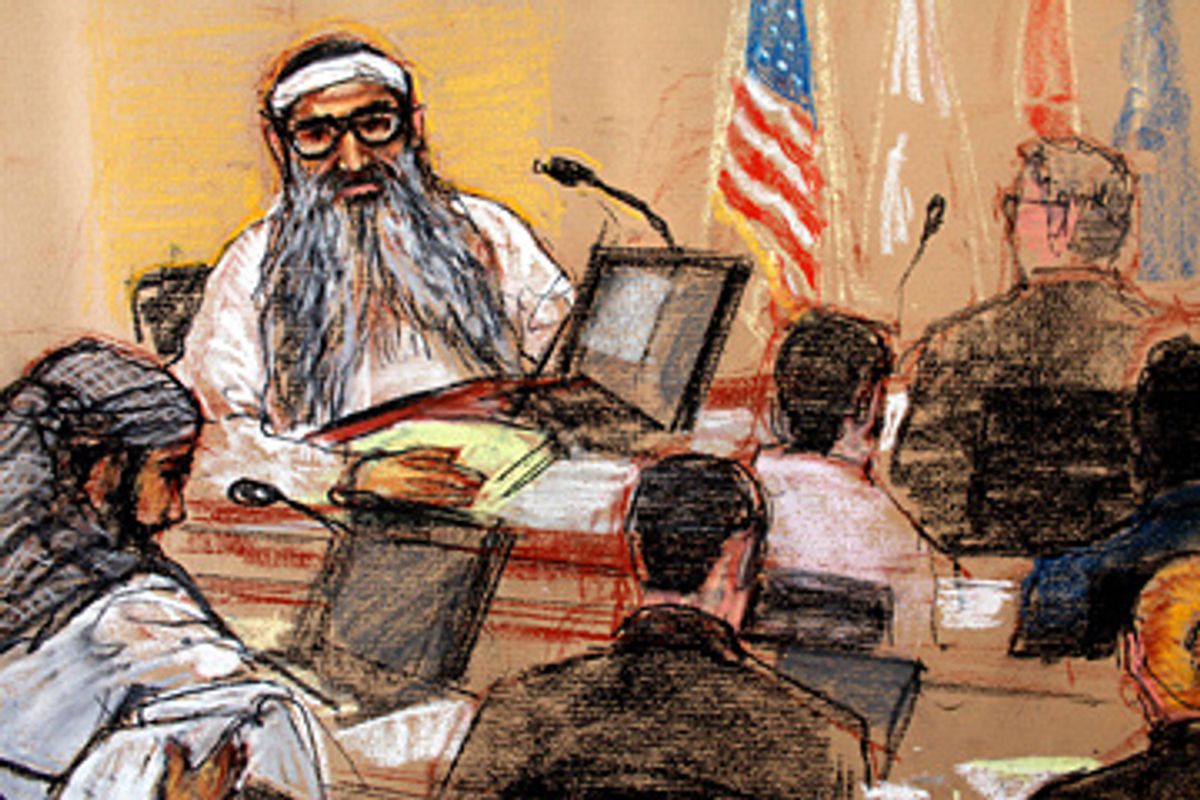 When President Barack Obama took the oath of office Tuesday, one question was foremost in the minds of the judges, prosecutors, defense lawyers, witnesses, journalists and non-governmental trial observers who had traveled to Guantánamo Bay: Would the new president seek to suspend the widely criticized military commissions to try terrorism suspects under way here?

On Wednesday a military judge granted the prosecution's request to halt proceedings against Khalid Sheikh Mohammed and his four alleged co-conspirators in the Sept. 11 attacks for 120 days.

It wasn't the order to stop the military commissions permanently and transfer the cases to U.S. federal courts, which we would have liked, but it was the first step to shutting down a process that has been tainted beyond repair.

In the days and weeks leading up to Tuesday's inauguration, President Obama made it clear that one of his first priorities would be to issue an executive order closing the Guantánamo detention center. It was also assumed that he would stop the military commission proceedings. Such a move seemed all the more urgent because the controversial trial of Omar Khadr -- a Canadian who was only 15 when he was accused of terrorist acts -- was scheduled to begin on Jan. 26.

The scheduling of proceedings this week was controversial from the start. Despite the expected order seeking to suspend the military commissions, and even though Monday was a national holiday commemorating Martin Luther King Jr., judges scheduled hearings for both Khadr and for Khalid Sheikh Mohammed, the alleged mastermind of the 9/11 attacks, and four alleged co-conspirators.

Both the prosecution and the defense in the 9/11 case had asked that proceedings be halted until after Obama took office, since, in the words of defense counsel for one of the accused, it was "a waste of everyone's time to come down here." But the judge, Army Col. Stephen Henley, denied the request and held hearings as scheduled.

The hearings in the 9/11 case began with drama and ended in confusion. Outbursts from several defendants raised tensions in the morning, with Ramzi bin al-Shibh conducting a now-typical verbal attack on his military lawyer; Khalid Sheikh Mohammed launching into a short tirade about Iraq, Afghanistan and U.S. military abuses; and Walid bin Attash speaking so quickly and angrily at one point that little of what he said was translated. Even Mustafa Ahmed al-Hawsawi, usually the mildest of the bunch, seemed tense and upset.

"This is terrorism!" exclaimed Mohammed, without a hint of irony.

Lawyers took over during the second half of the day, debating military commission rules, constitutional and statutory requirements and myriad procedural issues. A relative calm came over the proceedings and defendants and audience members struggled to stay focused. When confusion over a missing motion led the judge to adjourn the proceedings early, most of the audience wasn't sure what was next on the week's agenda or when it would occur.

Compounding the uncertainty was the question of whether the new administration would take action. As the judge emphasized, in one of his repeated references to the possibility of interruption: "The next session, should it occur …"

In contrast, during the first day of the proceedings for Khadr, there was no hint that a new commander in chief would take charge. Rather, the defense argued that the trial should be postponed because it had not yet received sufficient access to discovery. The prosecution insisted it had provided all that was necessary.

The judge, Army Col. Patrick Parrish, whom some lawyers call "the rocket" for his expedience in the courtroom, began hearing arguments in a motion the defense had filed to suppress statements Khadr had made to interrogators while in U.S. detention. The court heard testimony from both a military interrogator, who questioned Khadr at Guantánamo, and an FBI agent, who interrogated him at the U.S. detention center at Bagram Air Base in Afghanistan.

Following Monday's hearings, the Office of the Military Commissions held a press conference with several 9/11 family members, who had reportedly been selected by lottery to travel to the base to attend the hearings. Visibly angry, and holding up large photographs of their relatives who died on 9/11, they appealed to President Obama to keep Guantánamo open.

"Today we were in the presence of true evil," said Donald Arias, who lost his brother Adam in the attack on the World Trade Center. "Mr. Obama needs to reexamine his decision and keep these tribunals going."

Joe Holland, who lost his son in the World Trade Center, trembled with rage as he took the podium.

"My name is Joe Holland and I lost my son in 9/11," he said. "When I said I was coming down here, people asked me what they could do. I said, 'Write a letter to Obama saying that this place should stay open.'"

When journalists asked Holland about the possibility of trying the 9/11 suspects in federal court, he replied, "No, right here, at Guantánamo," then excused himself from the podium as he fought back tears.

Shortly after proceedings commenced in the Khadr case Tuesday morning, Judge Parrish acknowledged that the changing of the guard in Washington might have some bearing on the schedule. To the relief of many in the courtroom, he called for a recess at 11 a.m. and promised to resume at 9 a.m. on Wednesday, "unless otherwise ordered by the commission."

Like many at the base, we were eager to watch the inauguration and headed over to the mess hall, which has several televisions. As we sat down with plates of macaroni and cheese, several of the 9/11 family members took a seat at the table next to us. Tables of soldiers occupied several of the other tables around us.

As the camera panned to President Bush, some of the 9/11 family members clapped. As President Obama was sworn in, others in the galley clapped. A silence fell over the room as the new president began to speak.

Obama referenced terrorism at one point, stating, "For those who seek to advance their aims by inducing terror and slaughtering innocents, we say to you now that our spirit is stronger and cannot be broken; you cannot outlast us, and we will defeat you." One of 9/11 family members cheered. "I like that! Now the man is talking."

With the new president now in office, we checked in with the lawyers representing detainees who have hearings this week to find out whether they knew if we would be in court Wednesday morning.

Several hours later, the state of play had changed again. And while a 120-day delay is not the end, it is a harbinger of what is yet to come.