Let's beat up on the Oscars

The Academy's nominations offer a few exciting surprises amid a raft of obvious prestige picks. 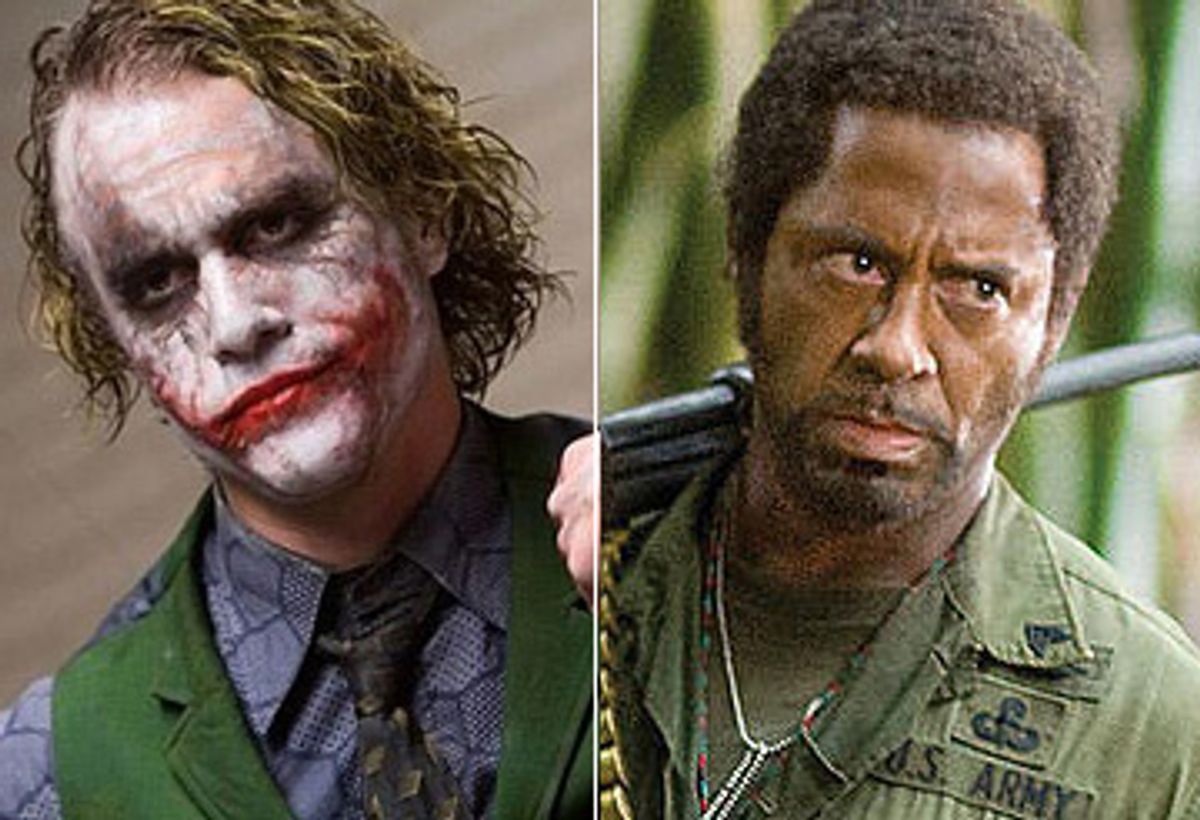 There is no more dismal task for a critic than trying to parse the collective brain of the Academy of Motion Pictures Arts and Sciences, first when its nominations for the Oscars are revealed, and then, about a month later, when we learn who the winners are. Collective brains are, by their very nature, unimaginative. Yet we're supposed to pretend that the Academy's choices are "interesting," even when they're not. Every year, we take the bundles of noninformation we're given and attempt to draw from them sensible conclusions that will make us sound like we're in the know: "The Academy likes tasteful literary adaptations, therefore it makes sense that 'The Reader' would get nominated!" "Meryl Streep gives a 'wow' performance in 'Doubt' -- of course the Academy couldn't ignore it!"

So in parsing the load of noninformation dropped this morning by Academy president Sid Ganis (producer of "Deuce Bigalow: Male Gigolo," among other noteworthy films), I offer the following probing insight: It sure helps to be dead! The late Heath Ledger received a best supporting actor nomination for his performance in "The Dark Knight," which -- no matter how you feel about it -- you can bet the Academy would have ignored if poor Mr. Ledger were still with us. And in nominating "The Reader" (for, among other things, best picture), the Academy tacitly honors not one but two of their deceased peers, Anthony Minghella and Sydney Pollack. (A dull literary adaptation and two of its producers are dead -- kismet!)

Wait, you say: "The Reader" is a quality film, and maybe the members of the Academy genuinely like it for its own merits. And Heath Ledger was terrific as the Joker -- he deserves an award, or at least a nomination.

But the idea of being deserving or not is beside the point with the Oscars: Most of us watch the ceremony on TV as a way of matching up our own ragtag sets of likes and dislikes with those of the Hollywood professionals, who -- ostensibly -- know what they're doing. That's part of the fun, and even our frustration with the Academy is part of the fun. So why beat up on them?

Because beating up on them is also fun.

Besides that, when the Academy sounds its piercing dog whistle, everyone who's even loosely involved in the entertainment industry (that would include me) has to spring to action, like Rin Tin Tin, with a response -- even though for critics it would be in keeping with the supposed function of the job to ignore them. The Academy Awards have almost nothing to do with movie art, or even, most of the time, with movie fun. (Who thinks back lovingly on "Gandhi" or "Chariots of Fire"?) The Academy Awards are almost purely about publicity.

So let's just list some of the boring, obvious choices to get out of the way: Best-picture nominee "Frost/Nixon" is a solid-enough piece of filmmaking, but one that gleams with the kind of prestige the Academy likes. Then there's Michael Shannon's overcooked supporting performance in "Revolutionary Road" (a picture that was, somewhat surprisingly, otherwise ignored by the Academy, even though it has "prestige" written all over it). "Slumdog Millionaire" -- a picture I find interesting in terms of its filmmaking, although I was curiously unmoved by it -- has been gathering so much steam as an audience favorite (in addition to winning big at the Golden Globes) that it's not surprising the Academy would pay attention to it, too, with nods that included best picture and best director for Danny Boyle. The inclusion of Gus Van Sant's "Milk" (best picture, best director, best original screenplay for Dustin Lance Black) and the recognition garnered by Sean Penn and Josh Brolin's performances represents a semi-surprising choice, but given the attention the movie and those performances have gotten from critics' groups, it doesn't qualify as much of a dark horse.

But Robert Downey Jr. nominated in the best supporting actor category for "Tropic Thunder"? Now there's a dark horse, notable because the Academy doesn't usually pay much attention to comic performances (or comedies in general). Then there are those scraps of evidence that the Academy does occasionally venture out from its fully enclosed armored space egg to pay attention to "littler" movies, evidenced by nominations for "The Visitor" (Richard Jenkins as best actor) and for "Frozen River" (original screenplay by Courtney Hunt; Melissa Leo as best actress). The Academy also paid attention to Carl Deal and Tea Lessin's post-Hurricane Katrina documentary "Trouble the Water." Good for them. And in nominating Viola Davis (best supporting actress for "Doubt") and Taraji P. Henson (best supporting actress for "The Curious Case of Benjamin Button"), the Academy honors two terrific actresses who are always alive on the screen but who haven't always gotten the attention they deserved.

But what about the oversights? Sally Hawkins, a critics' favorite for her performance in Mike Leigh's "Happy-Go-Lucky" (which also happened to be my own favorite performance of the year), fell off the edge of the earth at the Academy (if, in fact, she was ever on it to begin with). And I confess I was hoping that either Jeffrey Wright or Beyonce Knowles, or both, would be recognized for their terrific performances in "Cadillac Records," Darnell Martin's fictionalized but spiritually faithful telling of the Chess Records story.

And here's where I need to come back around to the Academy's lack of imagination. "Cadillac Records" is a terrific little movie -- one of the best of the recent Christmas season --that has pretty much died in theaters, while snoozes like "The Reader" and "Revolutionary Road" are still going strong. It's also a movie that tells a quintessentially American story and included in that story is Etta James' "At Last," which Beyonce sang in the film.

Of course, that song -- its title isn't even a clever double meaning, but a straightforward single one, a sigh of relief and jubilation -- became the theme song for President Obama's inauguration. I often hear movie fans making an argument for the importance of the Academy Awards: The awards mean something, these people claim, because they're conferred by the individuals who actually make movies. Surely, they must know something that we mere mortals don't.

But do they get out enough? Do they really stretch all that far beyond the usual range of choices open to them? It's extremely rare to see a Hollywood filmmaker actually going out to see movies at either a domestic or an international film festival; my hunch is that few mainstream filmmakers seek out the odd, the strange, the interesting, as a way of enriching their own craft. In his speech on Tuesday, President Obama cited a number of human traits that can help us get through hard times: Curiosity was one of them. The Academy Award nominations this year, as they do every year, offered a few surprises amid a gaggle of complete nonsurprises. The Academy -- film professionals, all of them -- appear, as a group, to be professionally uncurious. I'm certain civilian moviegoers are a much more adventurous group. In seeking out what's truly imaginative, engaging or moving, we have to be our own pioneers.