Brendan Fraser stars in this fantasy-adventure about the power of books. But where is the magic? 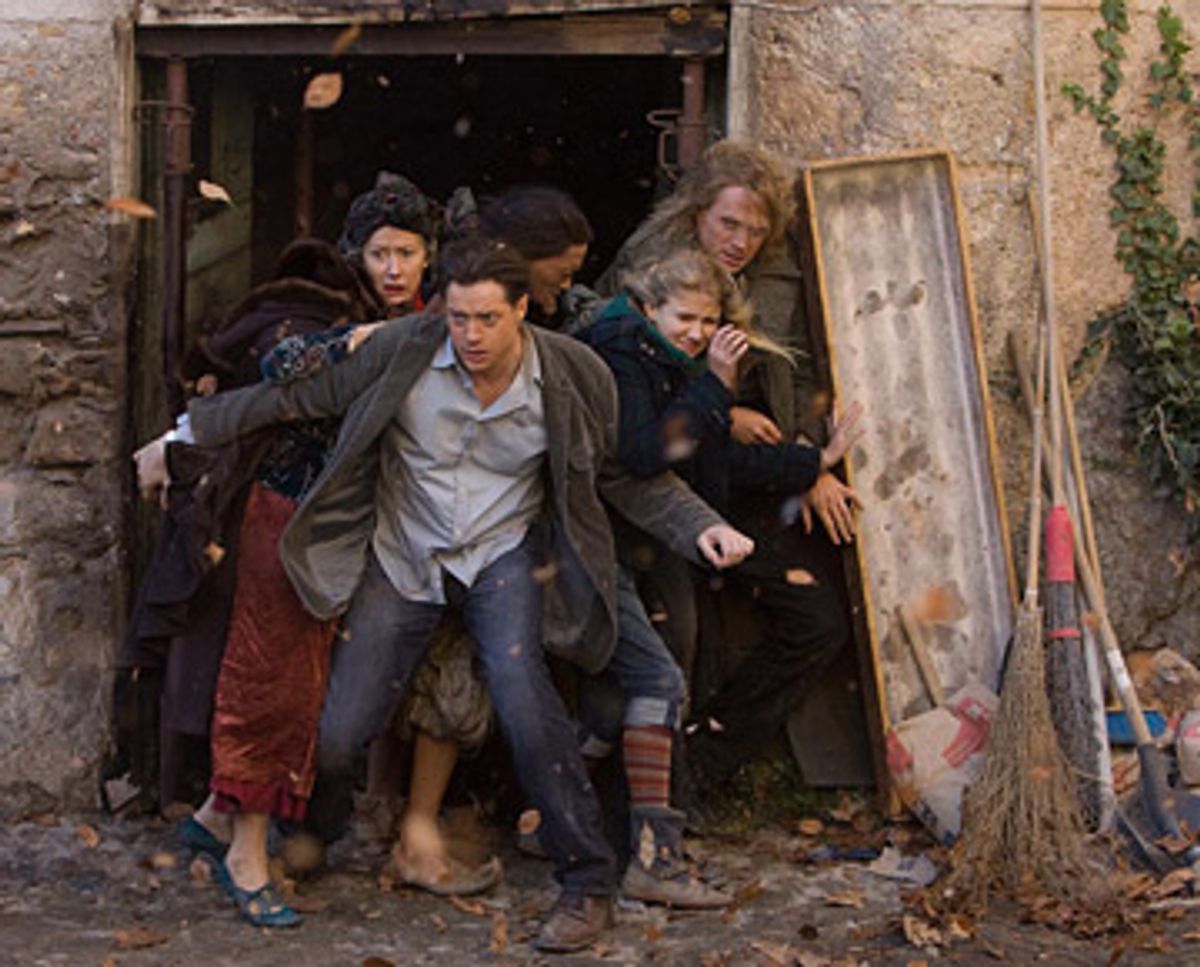 Iain Softley's fantasy-adventure "Inkheart" -- based on the 2004 novel by Cornelia Funke -- is graced with so many fanciful touches and features such a marvelous assortment of U.K. and American actors that it seems almost unjust that the final product is so curiously lacking in magic. Brendan Fraser plays Mo Folchart, a tweedy book collector (and book lover -- let's not assume those two automatically go hand-in-hand) who has learned he has a special gift: When he reads aloud, the people and events on the written page spring to life, literally. As with most magical gifts, there's a catch (which I won't reveal). And there's also a chance that Mo's 12-year-old daughter, Meggie (Eliza Hope Bennett), who happily accompanies her dad as he scours remote European bookshops for rare volumes, may have inherited his special talent. That possibility spells danger for her, given that a formerly fictional -- and now all-too-real -- villain named Capricorn (Andy Serkis) is on the hunt for Mo, hoping to use his talents for evil purposes. Another creepy figure, a shaggy, blond-haired wanderer named Dusteater (Paul Bettany), has an interest in their powers too, although his motives are more ambiguous.

"Inkheart" is loaded with other colorful types, including Helen Mirren as an old-school eccentric aunt (her head is swathed in turbans, and her fingers are adorned with oversize antique rings) and Jim Broadbent as a crotchety novelist who's called in to take control of some of his more unruly characters. The script, by David Lindsay-Abaire, contains much lofty dialogue about the magic of books, some of it unquestionably poetic. At one point Mirren's Aunt Elinor, whose library appears to mean more to her than the people in her life, makes this succinct observation about the nature of books and the life inherent within them: "They love anyone who opens them."

There are also flying monkeys (straight out of "The Wizard of Oz"), a slinky, flirty ferret and an imprisoned "princess" who has been silenced by her evil master. But after a lovely opening sequence (involving a floating red cape that drifts through the skies, summoned by a reading of "Little Red Riding Hood") and a promising first 20 minutes overall, "Inkheart" gradually becomes cluttered and noisy, ultimately veering out of Softley's control.

It's hard to say exactly how and why it starts going wrong. Softley's credits include the 1994 "Backbeat," a soulful biopic about the almost-Beatle Stuart Sutcliffe; an ardent adaptation of Henry James' "The Wings of the Dove"; and "The Skeleton Key," an artfully made ghost chiller set in New Orleans. (Released just a few weeks before Hurricane Katrina hit, "The Skeleton Key," with its misty atmospherics and images of gracious but decrepit mansions, now seems like a postcard from a lost world.) Even Softley's worst movie, the wretched "K-Pax" -- in which Kevin Spacey plays a being who may or may not be from outer space, to the extent that anyone can be made to care -- is still a sturdy and sensible piece of direction. You'd assume Softley could do something with raw material as intriguing as this is.

"Inkheart" is by no means a disaster. It's a spirited, well-intentioned picture, and a handsome-looking one too, heavy on misty grays and mossy greens splashed with occasional and welcome strokes of red -- you can't really accuse it of visual garishness. (The cinematographer is Roger Pratt, who shot the defiantly pewter-toned "Harry Potter and the Goblet of Fire.") But the narrative takes so many twists and turns that it becomes a dense tangle, and the ending is one of those tidy, "Why didn't someone think of that earlier?" Band-Aids. Significant characters (played by significant actors) drift into and out of the picture without having much to do -- Softley doesn't shape the material in a way that allows them to emerge distinctly. Mirren appears to be having a good time swanning about in her outlandish get-ups, and still, Softley manages to lose track of her; Serkis comes off as little more than a bland, grinning gangster; and although Fraser is, as always, likable and reasonably believable, he often looks as if he's not sure what movie he's stumbled into.

The problem may be that "Inkheart" just doesn't live up to its wondrous beginning. Early in the movie, Mo steps into a dusty bookstore, and the volumes on the shelf start chattering to him in conspiratorial whispers, all but beckoning "Read me!" In that sequence Softley works a feat of eerie magic, setting a standard that he can't maintain through the rest of the movie. Over and over again, characters in "Inkheart" wax eloquent on the power of books. But there's nothing in the movie as haunting or as compelling as the sound they make when they speak for themselves.