The power of the pen 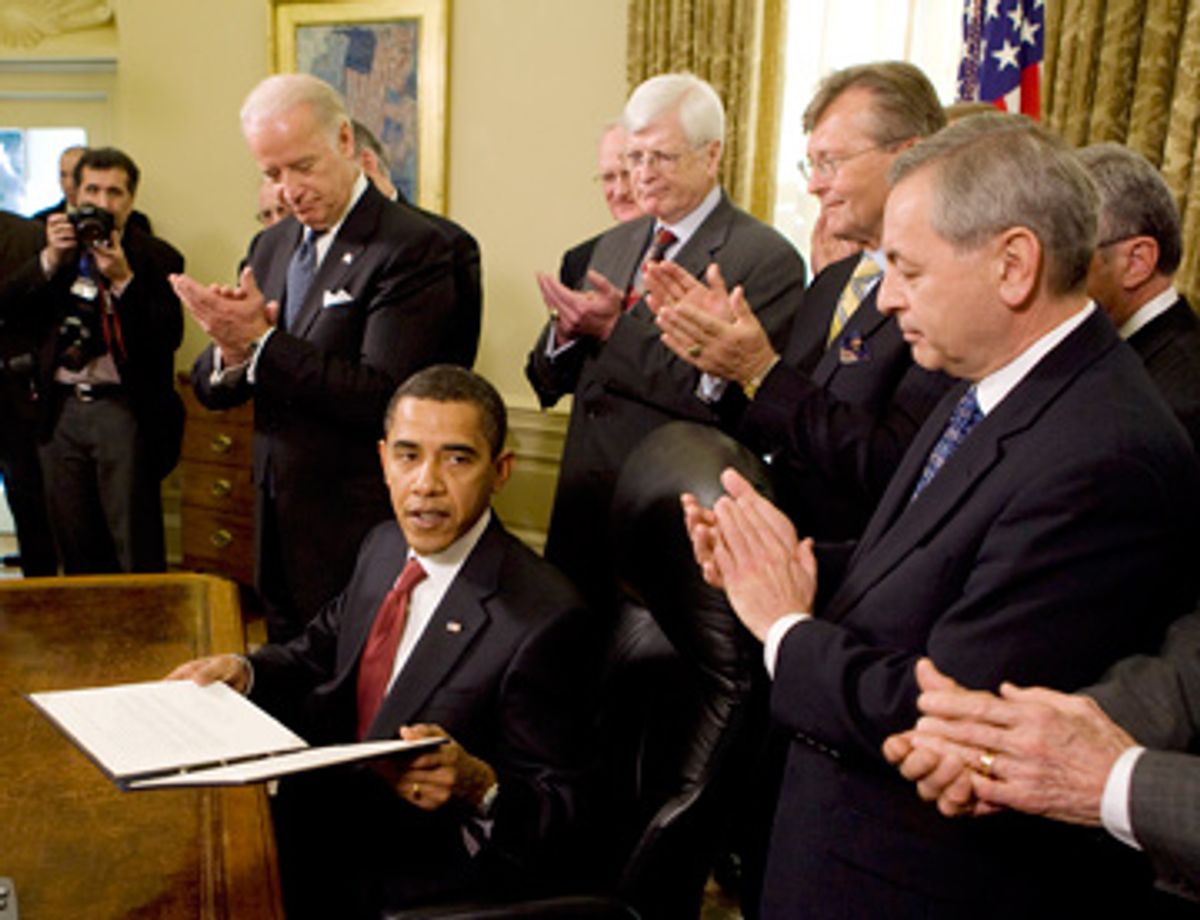 It turns out that the good thing about setting up a classified detention system in Cuba that's entirely run by the Pentagon, or a secret network of CIA torture chambers around the world, is that the White House can pretty much do whatever it wants with them by executive fiat -- including, as of Thursday, order them all shut down, as quickly as possible. (Of course, that power to rule Guantánamo and the secret prisons without any oversight is also one of the main reasons human rights advocates have been clamoring for them to be closed.)

With a few strokes of a pen Thursday, President Obama undid years of policy that was the cornerstone of George W. Bush's "war on terror." He ordered the prison at Guantánamo to be shut down within a year, the detainees moved to other countries or to regular U.S. courts; forced the CIA to stop torturing people, to close secret "black sites" around the world and to follow the Army Field Manual rules on interrogations; and told the entire government to stop relying on legal opinions issued by the Bush administration to justify policies that were never justifiable except in the eyes of the people who hatched them up.

"This morning, I signed three executive orders," Obama said at an afternoon ceremony at the State Department, where Hillary Clinton was sworn in as his top diplomatic envoy. One of her first tasks will be to find ways to send some of the Guantánamo prisoners to other countries where they might he held, prosecuted or released, but not mistreated, administration officials said. "First, I can say without exception or equivocation that the United States will not torture," Obama said. "Second, we will close the Guantánamo Bay detention camp and determine how to deal with those who have been held there. And third, we will immediately undertake a comprehensive review to determine how to hold and try terrorism suspects to best protect our nation and the rule of law."

The orders weren't a complete and immediate reversal of Bush and Dick Cheney's Jack Bauer-esque security policy. The prison camp at Guantánamo won't close for a year, and Obama's orders said the government would "review" what to do with detainees it can't transfer to other countries or prosecute in regular or military courts, leaving an out that could lead to yet more tribunals outside the normal rule of law. "If there is evidence to suggest that a detainee is very dangerous, and there is reason to be concerned that he would be a danger to United States citizens if he was released ... but there is not evidence that would be admissible in a court of law that you could use to prosecute," then detainees might be shunted off to some other system, said a senior administration official (whom Salon cannot identify, under the rules of a briefing the official conducted, but whom White House press secretary Robert Gibbs later referred to several times as "Greg" during his own briefing; a glance at the White House senior staff roster might help demystify that reference). Likewise, the administration will review the Army Field Manual to determine whether it really meets the CIA's needs, though the senior official said the White House doesn't intend to bring back "enhanced interrogation" techniques like, say, pouring water on detainees to make them think they're drowning.

Even if it takes a while to close Gitmo, though, and no matter how potential loopholes are closed, the orders represented a sharp break with policy that had seemed untouchable during the Bush era. Merely raising questions about the secret prisons, or asking why the U.S. was torturing prisoners in the name of protecting democratic ideals, used to generate outraged cries from the Bush White House -- and from Republicans around town. When the Washington Post broke the news that the secret prisons existed, Republicans in Congress launched an investigation into the paper's sources, and suggested the mere publication of the story put Americans in danger. "We have to work the dark side," Cheney proclaimed shortly after 9/11 -- and his office then oversaw the production of legal documents within the administration that justified any number of extreme measures. The Bush White House fought tooth and nail against efforts to bring Guantánamo under the supervision of U.S. courts, a battle it finally lost last summer.

Some Republicans kept the fight up Thursday. "We should not gamble with the safety and security of the American people and our troops on the battlefield," House Minority Leader John Boehner of Ohio said. After all, moving alleged terrorists into U.S. courts -- and prisons -- could set off the mother of all NIMBY battles. The GOP is firmly on the side of continuing to keep the whole problem far from American soil. "It is safer for the American people to keep committed terrorists at a secure facility hundreds of miles away from our shores rather than in facilities located in or near American communities," said Senate Minority Leader Mitch McConnell, of Kentucky.

But the Obama White House seemed to be ready to put down any charges that the new chief executive was risking much by his actions. "The president believes that what he did today will enhance the security of the American people, that it lives up to our values as Americans, and that it will protect the men and women that we have in uniform," Gibbs said in what was the new press secretary's first televised press briefing. Obama signed the executive orders about torture and Gitmo in the presence of no less than 16 retired generals and admirals at the White House, a clear sign Obama's imagemakers didn't want anyone getting the idea he was soft on terror. The message wasn't exactly subtle. But if the administration really follows through on Thursday's orders, the message the U.S. will send around the world won't be, either.