The comedian talks about why African-Americans spend so much money on their hair, the political ramifications of the weave, and his new documentary. 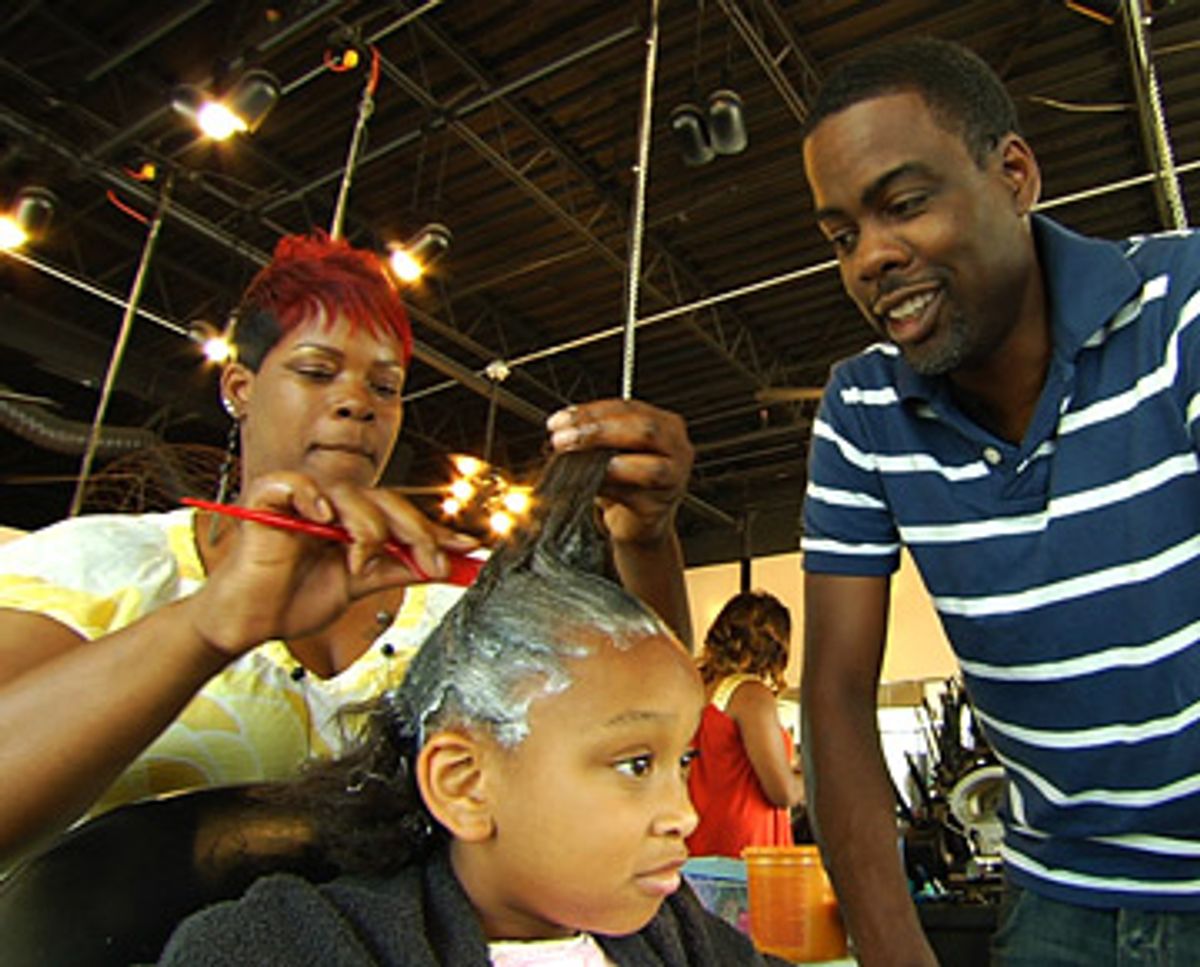 Listen to the interview with Chris Rock

PARK CITY, Utah -- According to the story that comedian Chris Rock tells at the beginning of "Good Hair," the documentary he produced, co-wrote and narrates that premiered here this week, his young daughter Lola came inside from playing one day and asked him, "Daddy, why don't I have good hair?" That question launched Rock and director Jeff Stilson on a nearly global inquiry into the meaning and history -- not to mention the prodigious financial significance -- of hair in the African-American community.

Amazing as the Bronner Bros. show is, the business of black hair is far bigger still. As I confessed to Chris Rock during our Park City conversation, I've seen the aisles of black hair-care products at chain stores, and I knew about the existence of relaxers and hair weaves. But the ubiquity of relaxed, straightened, processed or augmented hair among black women -- and the immense cost this can represent -- was something I'd literally never thought about. (Maybe Rock was just trying to make me feel less clueless, but he says he didn't know much about the subject either before making the film.)

Rock conducts frank, funny and sometimes startling interviews with superbly coiffed black celebrities from Maya Angelou and the Rev. Al Sharpton to Ice-T, Salt-n-Pepa, Nia Long and Raven-Symoné. He meets ordinary women in hair salons across the country; and even travels to the Hindu temples of India, source of most of the hair that ends up in weaves attached to African-American women's heads. "Good Hair" is a smart and thought-provoking film without quite becoming confrontational. Rock raises the obvious fact that black Americans have assimilated to a cultural standard of beauty that is more European than African, but without treating it as a moral issue, or something that a movie made by a comedian is likely to change.

Rock joined me on a sofa in a crowded storefront space on Park City's Main Street for a few minutes of conversation. As with so many professional extroverts, his offstage demeanor was reserved, calm and a little on the serious side.

If I was producing and marketing a film that is about African-American culture, and black people and black hair, the first place that I would want to come is Utah, naturally.

I saw it the other night with a predominantly white audience and they were laughing, and learning stuff, reacting ... Speaking as a, you know, middle-class white guy for all the other middle-class white guys out there, I learned a helluva lot from this movie. I knew that hair weaves existed and obviously I've been in the RiteAid in New York City and I've seen ... that entire aisle full of hair relaxers, but I didn't know what a huge scene it was.

By the way, I didn't know. I mean, the initial idea was just to shoot the hair show, and cover the hairdressers, and kind of make like a "Hoop Dreams" of hair. But the more we shot, the more other things popped up.

What you are talking about is the Bronner Bros. Hair Show in Atlanta, this amazing spectacle of competitive hair dressing. It's so great, and the characters that you meet, those people are so incredible ... So what drew you to this. Was it literally the experience that you talk about with your daughter?

It's my daughters, my friend's daughters too, everybody had hair stories. It just seemed like a good place to go ... I love an idea I haven't seen.

It creates a wedge, actually.

Right, you talked to Al Sharpton about it.

It creates a tension in a relationship. Any man -- black or white -- will tell you most relationships break up over sex or money. You know ... so it is a big issue.

Were there things that actually surprised you that you learned about this stuff?

The business. Like you I've seen these aisles of relaxers and stuff, but I had no idea, I just kind of took it for granted, I didn't know that the relaxer business was no different than the General Motors or Apple or even the weave business, how ... the weave business is like the legal drug business in the sense that the stuff comes from this other country.

The hair comes from India.

So somebody's hair salon in a black neighborhood in Little Rock -- probably their hair weave is coming from L.A. and India. That's amazing ... You know, one of the things that struck me is that if somebody had made this film in the '70s it might have been, you know, a bit more a call to arms -- nationalism, we can't have this.

You kind of raise the question a little bit -- is all of this about black people trying to look more like Europeans?

You know, the movie kind of ends with me not judging at all -- because you gotta think of it this way: A) I'm a man. So that would have been hard ... any definitive statement would have been like, yeah, "fuck you." And I'm kinda like famous too, so, "it's easy for you, you have people do your hair." So I had to be really sensitive about those two things. There is no answer, there is no right or wrong in this thing.

And I suppose another thing is that it is not like what you say is going to change a lot of women's minds about what they are going to do.

It was impressive to me that you got a lot of very famous and beautiful black women to talk really honestly about the fact that, yeah, this is 18 grand worth of somebody else's hair that I got on my head.

It is such a big deal in their lives that no one has ever asked them about. Their hair costs more than anything they wear, they spend more money on their hair ... maybe their rent is more. You know what I mean? It's like the No. 2, 3 expense of their whole life. And no one has ever even bothered to ask them about it. It's almost like they have a kid and no one ever said, "What's this kid like?"