Hoping for more than hope

Despite the joy brought by Obama's inauguration, it was only natural to experience a twinge of anxiety while celebrating at the edge of an abyss. 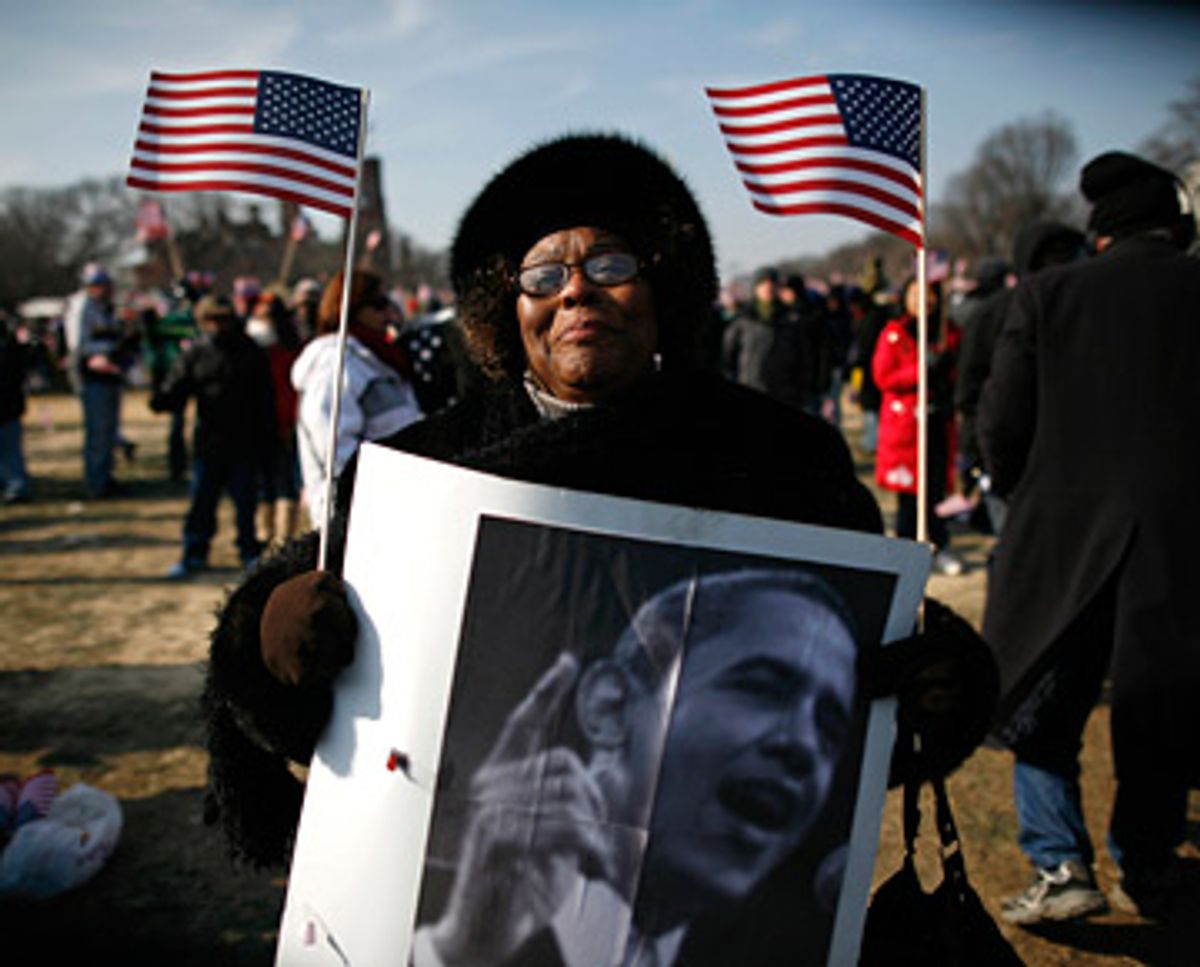 A confession: I occasionally cry during romantic movies and History Channel documentaries. Another confession: I often pretend that I'm coughing or clearing my throat in order to obscure said crying from friends and family. But watching the presidential inauguration, I -- like millions of Americans -- lost the ability to hide a public case of ocular Niagara Falls.

History undoubtedly spurred some of our national outpouring this week. A black man being sworn in to lead a country built on slavery, segregation and persistent racism is an unfathomable landmark.

There were also tears of prospective jubilation. Hearing a new president deliver a Rooseveltian "we're all in this together" speech instead of a Reagan-esque "every man for himself" implied the closure of an entire political era. In that sense, the moment felt like the first day of the rest of America's life.

Transcending our past and beginning a new future -- these are heady undertakings whose complexity and uncertainty explains the apprehension many sensed rumbling beneath their inaugural elation. Though presidential festivities and media superlatives tried to numb any feeling other than happiness, it's only natural to experience a twinge of anxiety while celebrating at the edge of an abyss.

America is certainly optimistic that Obama will take bold action. But with failed get-rich-quick schemes now bleeding risk into every corner of the economy, it's hard to feel like rescue is even possible. Indeed, with so many of the same people still calling the shots on Wall Street and in Washington, speeches about American resilience can seem like hospice anesthesia rather than promising reasons to hang on for a cure.

While rightfully commemorating Obama's victory as a step toward Martin Luther King's dream, African-Americans also wonder about new polls showing the country thinks racism isn't a problem anymore. Black leaders fear the election could be used as another excuse to ignore rampant inequalities. As Dr. King's son warned: "Obama's election is not a panacea for race relations in this country." Can White America accept that truism?

Thinking about future generations, parents and youth fret about whether our government -- even led by a forward thinker -- can muster the will to fight climate change. Is spaceship Earth the Apollo 13, headed for a miraculous recovery? Or are we on the Challenger, destined for a deadly explosion?

These are only a few of what Donald Rumsfeld might call "known unknowns" -- and the most opaque of them is Obama himself.

Cut through the meaningless platitudes describing our new president as a post-partisan, post-racial pragmatist, and you find an inspiring leader who organized us around optimism. Then consider that leader's behavior since the election, and you run into that nagging speck of doubt. His less-than-inspiring Cabinet appointments, his support of Bush's Wall Street bailout, his embrace of nonsensical corporate tax cuts -- these moves raise questions about whether Obama is willing to differentiate between his two campaign themes: hope and change.

While both those things have lately been in short supply, the distance between them on policy is the gulf separating ambition and realization. Hope is a bill peppered with "may" -- the word that merely asks banks or polluters to regulate themselves. Change is a statute teeming with "shall" -- a term forcing its targets to comply. Hope is telegenic glamour, winning smiles, and poignant one-liners. Change is all the grinding work and uncomfortable confrontations that come with challenging power and enacting transformative laws.

The reason so many cried this week is because we can finally glimpse that change in the distance. And yet, those pangs of concern linger. They don't undermine the euphoria or diminish Obama's promise. But they do recognize that we worry about hope's mirage -- and pray there are no illusions this time.