The best of Sundance '09 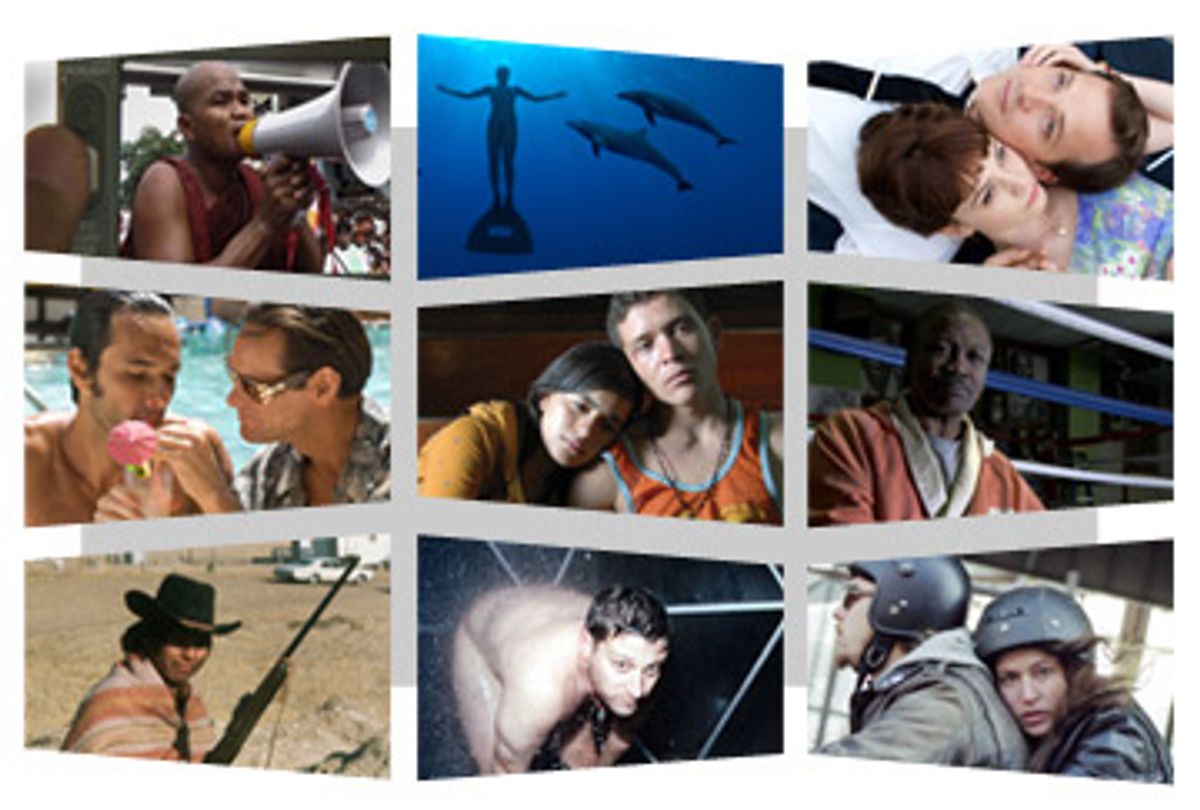 PARK CITY, Utah -- One of my housemates here, Patrick McGavin of Screen International magazine, reports encountering something this year he's never seen in 17 years at Sundance.  Rain. Yes, as the underslept, overpartied hordes prepared to depart Park City after a week of glorious weather -- and an erratic but highly enjoyable film festival -- the streets ran with snowmelt and the air was filled with the unmistakable odor of thawing mud. Spring had come to the Wasatch Range, if only temporarily and almost three months early. Although it makes for a great metaphor in this season of national renewal, etc., as reality it's more than a little creepy.

Accompanying the wacky weather was a roster of movies impossible to summarize with a pithy phrase or identify as a coherent meme. Among the narrative films, there was more genre work at Sundance this year and more old-fashioned storytelling; the downbeat, ultra-sincere minimalism of the previous few indie-film seasons was notably absent. To put it politely, Sundance has a mixed record in premiering bigger, more commercially-oriented films, but this year seemed to offer several potential hits. The cop opera "Brooklyn's Finest," the coming-of-age yarn "An Education" and the James Gandolfini-starring political farce "In the Loop" were rapidly snapped up by distributors; "Spread" and "I Love You Phillip Morris" are certain to follow.

On the other hand, Katherine Dieckmann's much-anticipated "Motherhood," a "Sex and the City"-inflected comedy with Uma Thurman playing a harried Manhattan mom, was a major disappointment, while the Polish brothers' farce "Manure," based on its reception, might have the most infelicitous title of the year. Mind you, both of those films looked like the work of Jean Renoir next to "The Informers," a wallow in the depravity of early-'80s L.A. with a roster of indistinguishably odious people.

As the marquee offerings grew more mediocre, more familiar kinds of low-budget, Sundancey indies began to assert themselves, from the appealing New York Latino love story "Don't Let Me Drown" to the harrowing, female-meltdown saga "You Won't Miss Me" to "Brief Interviews With Hideous Men," John Krasinski's alternately baffling and thrilling David Foster Wallace adaptation. Overshadowed by glitzy narratives in the first few days, the Sundance tradition of documentary excellence reasserted itself with works ranging from R.J. Cutler's delectable "The September Issue" to the haunting and disturbing dolphin-slaughter doc "The Cove" to the guerrilla journalism of "Burma VJ" and the peculiar early-Internet saga of "We Live in Public."

Sundance handed out its official awards on Saturday night -- the major jury prizes went to "Push" (drama) and "We Live in Public" (documentary) -- but given the minimal marketplace impact and cultural cachet of those awards, I'm going to stick with a one-year-old tradition and hand out my own. (I'm selecting from all Sundance premieres, not just the films in competition.) I was sorely tempted to declare a tie in the narrative category -- maybe even a three- or four-way tie -- but, my fellow Americans, you've got to stand for something, and today I stand for witty English comedy set in the early 1960s. Herewith the Beyond the Multiplex grand jury prizes in the dramatic and documentary categories, with my list of 10 (or so) other Sundance flicks not to miss.

An almost painfully perfect recreation of early-'60s London -- before it really became '60s London, that is -- and a starmaking performance from Carey Mulligan as mouthy, precocious, cello-playing and French-speaking 16-year-old Jenny, so eager to escape her suburban family that she falls for suave, older, Mr. Obvious Bad News (Peter Sarsgaard). Scripted by English novelist Nick Hornby ("High Fidelity") and directed by Danish helmer Lone Scherfig ("Italian for Beginners"), this is marvelously well-constructed period entertainment with a feminist bite. One can argue it's less substantial than the next three films on my list, each completely different from "An Education" and from each other. But the way to settle a four-way tie is with your heart, and I loved this film as I loved no other at Sundance this year. Sony Pictures Classics apparently felt the same way, which is why "An Education" should reach theaters later this year.

"Sin Nombre" This harrowing, pulse-pounding thriller, shot entirely in Mexico by young American hotshot director Cary Joji Fukunaga, looks like the debut film of the year. Born from a documentary impulse, but made with the fervor and precision of the best genre movies, "Sin Nombre" is both a violent nightmare and a love story, in which a repentant Mexican gang member and an innocent Honduran girl find each other aboard a freight train bound for the United States border. At the screening I attended, three women sitting next to me fled after the first killing; those who stayed were spellbound by Fukunaga's precocious blend of storytelling and technique.

"I Love You Phillip Morris" Yeah, this stars Jim Carrey and Ewan McGregor as gay lovers, but that only begins to hint at the profound, candy-colored weirdness of Glenn Ficarra and John Requa's insane, torn-from-the-headlines romantic farce (romarce?), which is based on the somewhat-true story of Texas con man Steven Russell (Carrey) and his eponymous boyfriend Phillip Morris (McGregor). Pitched in such a hysterical key it rubbed my nerves raw, ILYPM struck many observers as the one work of genuine genius we saw at Sundance this year, and they might be right.

"Adventureland" As in "Superbad" and "The Daytrippers," director Greg Mottola plows the salted fields of conventional movieland comedy -- in this case that means hormone-crazed youth, summer jobs, an amusement park -- and comes up with something startlingly fresh and amazingly unstupid. An absolutely note-perfect rendering of early-'80s nowheresville boredom, great lead performances by Jesse Eisenberg and Kirsten Stewart and an irresistible supporting cast of convincing suburban archetypes. You'll believe you were there -- and quite possibly you were.

"You Won't Miss Me" From the ultra-indie underbelly comes young New York director Ry Russo-Young's semi-improvised feature, a wrenching and beautifully shot character study of a charismatic but almost unbearably narcissistic young woman struggling with some undefined personal meltdown. With its aggressive, tour-de-force performance by Stella Schnabel (Julian Schnabel's daughter), its deliberately ambiguous structure and its memorable compositions, "You Won't Miss Me" is not aiming to be widely liked. But it's a vast leap forward from Russo-Young's debut, "Orphans," and confirms that she's an uncompromising, individual voice who demands to be taken seriously.

WISH I'D SEEN: "Push," a reportedly powerful adaptation of Sapphire novel that won the Grand Jury Prize and sparked arguments about whether mainstream audiences would avoid it; "Bronson" is an art-damaged, ultraviolent action thriller from Danish director Nicolas Winding Refn that viewers either loved or loathed; "Taking Chance" stars Kevin Bacon as a military escort officer accompanying a dead Marine's body back to Wyoming.

This devastating, beautifully shot and occasionally hilarious filmmaking debut from longtime National Geographic photographer Louie Psihoyos wins on "Inconvenient Truth" points, as the Sundance film most likely to shift public opinion. James Bond meets Jacques Cousteau in this cloak-and-dagger investigation of the dolphin slaughter of Taiji, Japan -- and along the way Psihoyos crafts a moving portrait of former "Flipper" trainer Ric O'Barry, now an activist seeking to destroy the entire "dolphinarium" business. This was a tough call, in that other Sundance docs on my list were more coherent and more rigorous. But documentary audiences are looking for passion, emotion and memorable images, and "The Cove" supplies plenty to spare while making its case, which goes well beyond dolphins to encompass the overall fate of the world's oceans.

"The September Issue" Sure, R.J. Cutler's film about the creation of Vogue's largest-ever issue will most appeal to fashion junkies, but his nine months of you-are-there reporting finds something deeper and more archetypal in the symbiosis between Vogue's notorious she-dragon editor, Anna Wintour, and the redheaded onetime swinging-London model, Grace Coddington, who serves as Vogue's creative director and Wintour's artistic conscience.

"Burma VJ" Officially directed by Danish filmmaker Anders Østergaard, "Burma VJ" is largely told through the inspiring and ultimately tragic footage shot by the Democratic Voice of Burma, a team of guerrilla video reporters who literally risked their lives to document the 2007 uprising against that country's military dictatorship led by Buddhist monks and students. Thrilling and terrifying, the film suggests that even the most autocratic regime can't stop the news from getting out -- but also that getting the news out still isn't enough.

"We Live in Public" Oddly hypnotic story of late-'90s New York Internet pioneer Josh Harris (founder and owner of Pseudo) and his bizarre voyeuristic and/or exhibitionistic schemes, which included establishing an underground hive of more than 100 people whose entire lives were conducted online, and later rigging his own apartment with motion-controlled cameras so *he* had no privacy. Director Ondi Timoner also captures Harris' mental collapse (which seems inevitable in retrospect) and his subsequent retreat into rural life. This won the documentary grand-jury prize, and it's no wonder; a bit like "The Great Gatsby," set during the first Web boom (and in the Twilight Zone).

"Thriller in Manila" This fascinating British-made sports doc offers a revisionist retelling of the third and final Muhammad Ali-Joe Frazier fight in the Philippines in 1975, then and probably still the biggest event in boxing history. Director John Dower finds Frazier, today living in obscurity behind his Philadelphia gym, and recasts him as the unfairly maligned villain of the story, a man who should have been a legitimate African-American hero and was typecast by Ali in ugly, racially inflammatory terms. (Ali constantly ridiculed Frazier as an ugly, stupid Uncle Tom.) The fight itself was an unbelievably brutal slugfest, and even the question of which man won -- and what it means to "win" such a bloodbath -- becomes ambiguous.

"Wounded Knee" In February 1973, American Indian activists took over the town of Wounded Knee, S.D. -- a few miles from the site of the infamous massacre of 1890 -- and held it against government forces for 71 days. Even in the radicalized landscape of the early '70s, this was an extraordinary event, and no one's better than director Stanley Nelson at exploring those moments when massive cracks appear in American history. Not as devastating as Nelson's "Jonestown," one of the great documentaries of recent years, but a valuable study of a half-forgotten event that galvanized Native Americans and their supporters from coast to coast.

WISH I'D SEEN: "Reporter" offers a portrait of the New York Times' redoubtable Nicholas Kristof, and a defense of his dying profession; "The Queen and I" follows a left-wing Iranian exile's hit-and-miss friendship with Empress Farah, widow of the deposed Shah; "The Yes Men Fix the World" captures the often-hilarious further adventures of anti-corporate political pranksters Andy Bichlbaum and Mike Bonanno.

Beyond The Multiplex Movies The September Issue