You don't have mail

In the tech-challenged White House, the prez's BlackBerry-savvy aides feel like they've stumbled into the Carter administration. 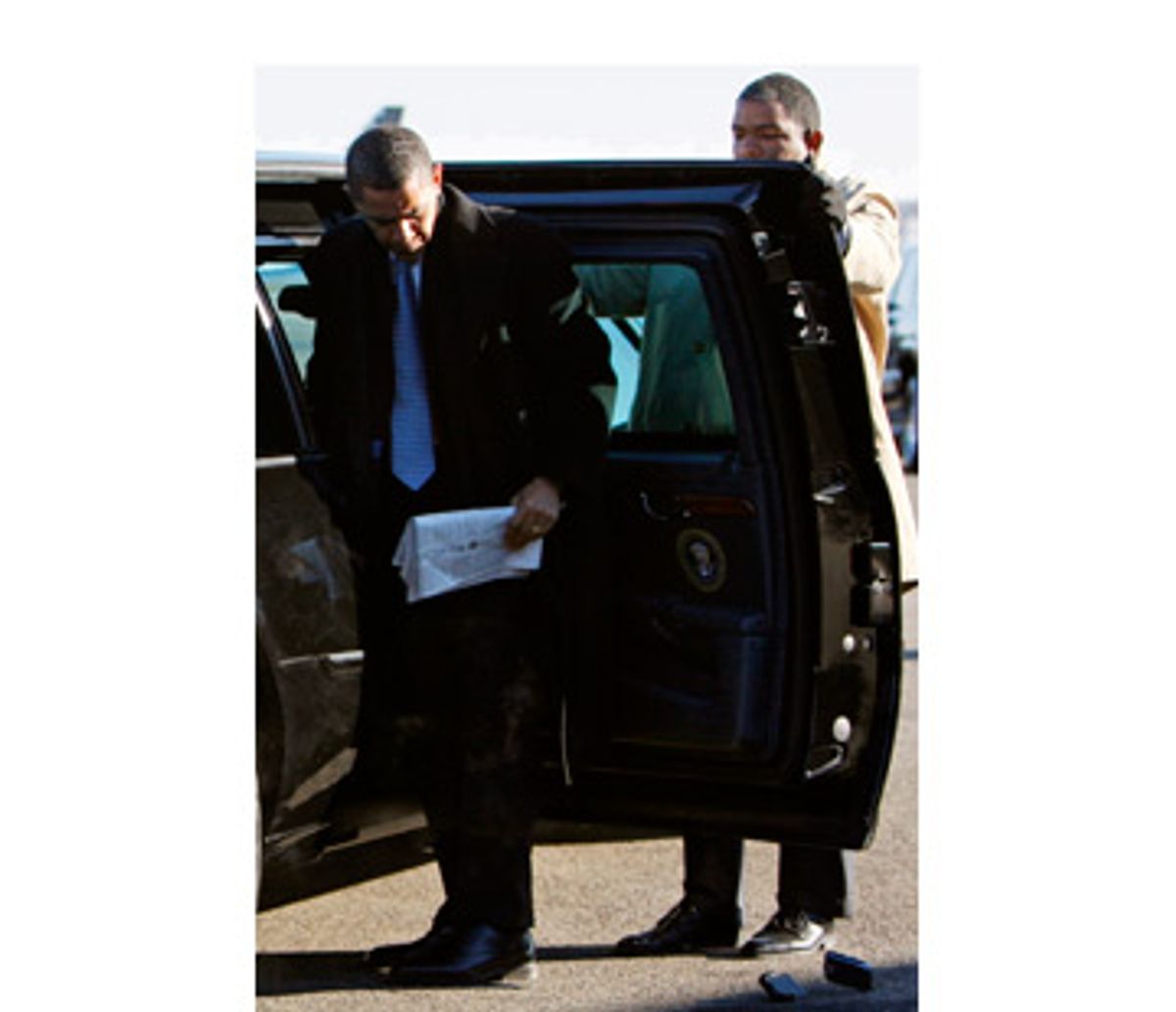 The first time Barack Obama's campaign used Facebook to try to spin Salon was on the night Sarah Palin and Joe Biden debated in St. Louis.

Looking over the e-mail flooding into reporters' in boxes from Obama aides and John McCain aides, I had posted a joke on Twitter, another social networking site, about how each campaign was insisting that the other side's vice-presidential candidate had been lying during the debate. The post got sent, automatically, to my Facebook page. A couple of hours later, an Obama spokesman posted a response on my Facebook page, repeating the campaign's message for the night (which was, no surprise, that Biden won). Five days later, he did the same thing after an Obama-McCain showdown, leaving a little declaration of victory for his boss somewhere in between the notifications about which of my friends had lost their jobs or broken up with their girlfriends.

It may or may not have been terribly effective as a piece of campaign strategy, but the episode was a pretty clear illustration of how plugged-in Obama's staff was to the world of online media. (By the end of the campaign, Obama's own Facebook page had more than 3 million followers.) Staffers -- including very senior aides -- could be found on various instant messaging systems more easily than on e-mail, and on e-mail much more easily than by phone. The campaign's electronic outreach was folded into its get-out-the-vote operation; Obama's road to the Oval Office was one of the tech-savviest examples of how new media can boost old-school politics the country has ever seen.

Which is why, now that they've moved into the West Wing, Obama's aides are starting to feel as if they've stumbled into a time warp and are actually working for the Carter administration, technology-wise. The White House e-mail system was down for most of Monday, leaving the press office out of touch with the world except through an overloaded phone system (complete with a full voice-mail box) -- for at least the second prolonged stretch since Inauguration Day. The new blog on Whitehouse.gov, which is supposed to be at the forefront of the Obama administration's new openness and transparency, still lags a day or two behind reality, in part because of trouble sending transcripts and messages around among the West Wing staff. (One of the few posts that have been published is essentially an apology for the slow start.) Memos Obama issued Monday morning were copied and distributed on paper in the White House press office, instead of being e-mailed out to far-flung reporters. Aides are privately grumbling about not having laptops, about delayed BlackBerry service and about the phones not working.

But the strangest adjustment for the Obama team is having to return to a time before Facebook. Legal restrictions, based on an interpretation of 1978's Presidential Records Act, forbid staffers from using outside e-mail, IM or any of the social networking tools the campaign thrived on. Suddenly, they have to relearn how to communicate, because the law has not caught up with the way people live. They are being forced to return to older technologies (or they will once those technologies start working properly), and abandon or become more guarded in their use of newer technologies.

Sometimes the grumbling is public, not private. "Let me just get organized here and bring you up-to-date on a couple of announcements, the first of which [is] our apologies if you've e-mailed any of us in the last two and a half hours," White House press secretary Robert Gibbs said Monday afternoon, explaining to a packed briefing room full of reporters why none of them had heard anything from any Obama aides all day. "Our e-mail system is not working so well."

For a nation that prides itself on peaceful transitions of power and an orderly handover of the levers of government, there's something alarming about the thought that the White House is still struggling to communicate with anyone -- inside or outside the building -- a week after Obama was sworn in. It would be one thing if Obama had seized power in a coup, but with nearly three months to plan for the transition, you'd think there would have been some way to make the e-mail servers ready on Day One.

Some of the problems -- like the e-mail -- are the same kind of hiccups that might delay anyone starting at a new job (especially when hundreds of other employees are starting at the same time). But some -- like the restrictions on what kind of Web sites the White House staff can use to reach the public -- won't change unless Obama and his staff order a review of policies that have been in place since long before anyone had ever heard of online social networking. "It took the British navy 150 years to carry lime juice on its ships after it was discovered that lime juice prevents scurvy," said Andrew Rasiej, the founder of the Personal Democracy Forum and a co-founder of techPresident, who has advised Democratic candidates on technology policy and strategy. "So hopefully the White House will be able to make advances in the protocols faster than that."

In the Bush administration, aides tried to get more involved in new technologies like Facebook, YouTube and others, but frequently bumped up against legal opinions that dated back to the Clinton administration about what the government could or couldn't do online. Bush's staff eventually realized the potential uses of new social networking Web sites, and began looking beyond just posting content on Whitehouse.gov, said David Almacy, Bush's Internet director from 2005 to 2007. But White House lawyers wouldn't let the administration publish content directly onto some sites, for fear that it wouldn't be archivable, and restricted use of other tools. Almacy and his staff had the same frustrations about how to use the Internet as Obama's team does now, but Bush hadn't come to office powered by an online grass-roots movement. Few people noticed whether his aides were on IM or Facebook, because Bush hadn't relied on those tools in his campaign.

Expect the Obama administration to try to change some of the rules. When the president himself pushes aides to find a way to let him keep his BlackBerry, chances are good that White House counsel Greg Craig will soon take a look at whether legal opinions from the days before anyone had heard of the Web still make sense. (There were apparently concerns about both security and the Presidential Records Act, but the issues seem to have been resolved.) "What people tend to forget is just how much the Internet has changed in the past two years, let alone the past eight," Almacy said. White House aides said they weren't sure whether any review of technology policy was under way.

Advocates on the left and the right alike want Obama to allow comments on the new White House blog. Some comments about Illinois Gov. Rod Blagojevich were deleted from Obama's transition Web site. They'd also like Obama to appoint a chief technology officer at the White House, to take a look at tech policy and help push for the transparency Obama has promised. Republicans, in particular, are a little less patient than Democrats about why the new White House blog doesn't include any of the official orders, transcripts or memorandums that Bush's White House used to publish routinely. "While the Obama administration's overtures to focus on tech innovation and government reform win them [acclaim from] the media and Obamamaniacs, will they overlook the basics?" Republican consultant Mindy Finn, who ran Mitt Romney's online operations, wrote on the Next Right. "When a blog that strikes a partisan, propagandistic tone serves as the only source for White House happenings, it's beginning to look like they will. Where are the press releases and the speeches?" Democrats tend to cut Obama's team a little more slack. "We have to give them an opportunity to crawl before they walk, and walk before they run," Rasiej said. "If after some period of time they don't move the White House forward to catch up with the rest of the planet, the rest of the planet will hold them accountable."

Some other changes might involve questions without clear answers right now -- for instance, if the White House sets up a Facebook page, do its followers belong to the current president (Obama) or to all presidents (whoever happens to be in the office in the future)? How should the White House prevent comments on official blog posts from devolving into a shouting match between a few dedicated partisans of one side or the other, drowning out other citizens? And those answers are probably coming, sometime in the future. For now, though, Obama's White House aides would probably be happy if they could just get their e-mail working.