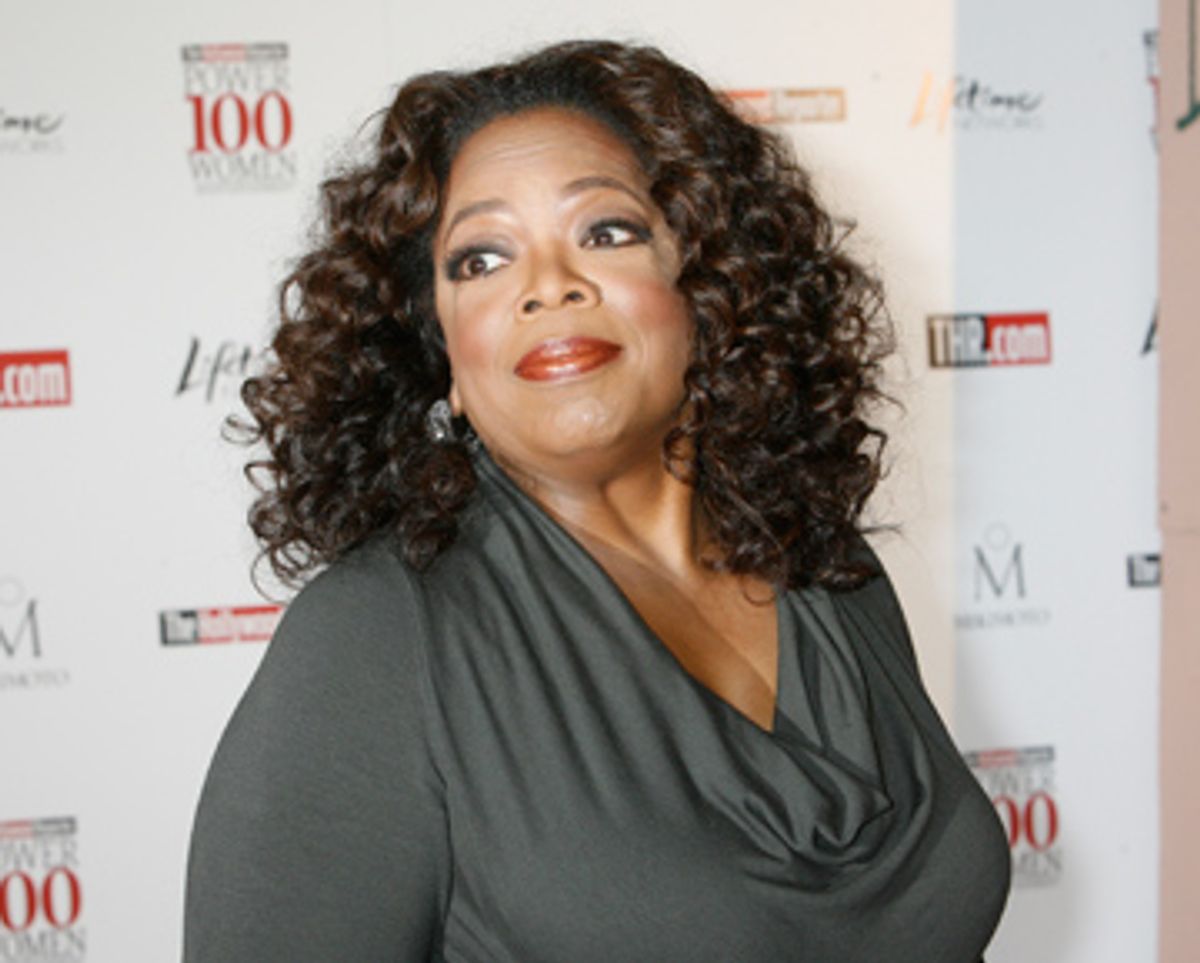 An unfortunate side effect of achieving complete global domination is that you can end up playing a symbolic role in the psychodramas of complete strangers. And thus yesterday Oprah Winfrey, the woman whom the New York Post calls “America’s most prominent secular, spiritual leader,” learned that she narrowly missed the call to be the next U.S. senator from Illinois in the make-believe playland of Gov. Blagojevich’s head. And over the weekend, she joined the long list of bellwether signs that Americans are really, truly bummed out (the news that around 55,000 people were laid off yesterday falls in that category as well), when the Post named a new social affliction in her honor in Maureen Callahan’s article “The Oprah Syndrome” with the unflattering subhead: “Bloated, Depressed -- as O Goes, so Goes the Nation.”

When Oprah confessed, on her top-rated Jan. 5 show, that she was nearing 200 pounds, it was the things of which trend stories are made: “I’m so embarrassed,” she said. “All the money and all the fame and all the attention and the success doesn’t mean one thing if you can’t control your own being.”

Offhand, I would say that being the queen of a multimedia conglomerate, with enough personal income to fund a small nation (or at least pretty much any literacy program or girls’ basketball team that strikes one’s fancy), along with the cultural power to crown the next literary bestseller and help elect a president, means much more than one thing, more than several things, in fact. And being able to do all of that in a medium that favors the skinny, helmet-haired, newscaster look is part of her achievement, not her failure.

"She actually said that it doesn't matter how much she can accomplish unless she gets control of her body," Micki McGee, the author of “Self-Help Inc.: Makeover Culture in American Life,” and one of the half-dozen or so “Oprah scholars” (who knew?) cited in the article, tells the Post. "You cannot control yourself by controlling your body. She's diminishing all her other accomplishments while trying to create a diminutive physical self. It's tragic."

It is tragic, especially when she could be using that same bully pulpit to push back at the idea that creating a “diminutive physical self” means more that creating a gargantuan world empire. But Oprah’s particular empire is built on selling the notion of the self as a permanent fixer-upper that can always be improved, which, by definition, relies on perpetually ferreting out one’s major sins, minor flaws and ordinary annoyances to be fiddled with, rectified and completely overhauled.

Self-help, of course, was not new back when the Horatio Alger, pull-yourself-up-by-your-bootstraps credo got written into America’s mythology. But it’s always come with a nasty downside, according to the article: “American interest in it tends to peak when the gap between rich and poor widens. It was enormously popular in the 19th century, the Gilded Age, in part, because it explained away wealth inequality; people who were spiritually superior attracted wealth; poor people deserved their suffering.”

It’s fascinating, then, to think of the rise of self-help gurus in our own Gilded Age. Oprah’s entourage, according to Callahan, tends to favor “maternal white women (Marianne Williamson, Elizabeth Gilbert) and authoritarian men who brook no challenge, defiance or nuance (Dr. Phil, Bob Greene).” In the memorable words of Jennifer Harris, co-editor of the “Oprah Phenomenon”: “It’s like they’re spanking Oprah.”

A huge part of Oprah’s achievements, then, have been based on selling narratives of personal “failure.” Many of those “failures” -- sexual abuse, an admittedly horrific childhood -- had little to do with Oprah failing herself and everything to do with people failing to take care of her. Oprah scholar and author Eva Ilouz, author of “Oprah Winfrey and the Glamour of Misery” (perhaps Morrissey and Robert Smith could be the subjects of later titles in the series?), calls it her “therapeutic biography.” Oprah Winfrey casts herself as the condensed version of the problems that plague the most ordinary of women: lack of self-esteem, sexual abuse, overweight, failed romantic relationships ... Her success is cast as a therapeutic victory over the extraordinary shortcomings of a difficult life."

And yet, the depressing truth is that evidence seems to suggest one of the struggles that most interests her audience is Oprah’s seesawing weight: “When she is slender, they go down; when she is heavy, they go up.” What is going on here? Do we only like her when she is, to use the jargon of women’s magazine editors, “relatable”? Callahan tries to somehow link Oprah's "public shame over her gluttony" and her "renewed commitment to regaining control" to Obama's call to the nation to "put away childish things." She asks: "What could be more austere than denying yourself food?"

Ah, choosing between paying the light bill and the phone bill? Weighing the cost of your child's winter coat against the rent or mortgage? We could all go on. While many of us may soon be weighing the costs of, say, the dollar menu versus organic chicken or regaining our svelte college figures by revisiting the ramen noodle diet, I think it's safe to say that weight loss may not be quite the perfect metaphor for the kind of austerity Obama was calling for. What's more, it's not even the most useful lesson that I suspect Oprah -- a woman who has lived with want, however luxurious her current lifestyle may be -- could provide to her audience.