By rejecting Bush's torture tactics, the new president is urging Americans to reclaim their principles -- and their courage. 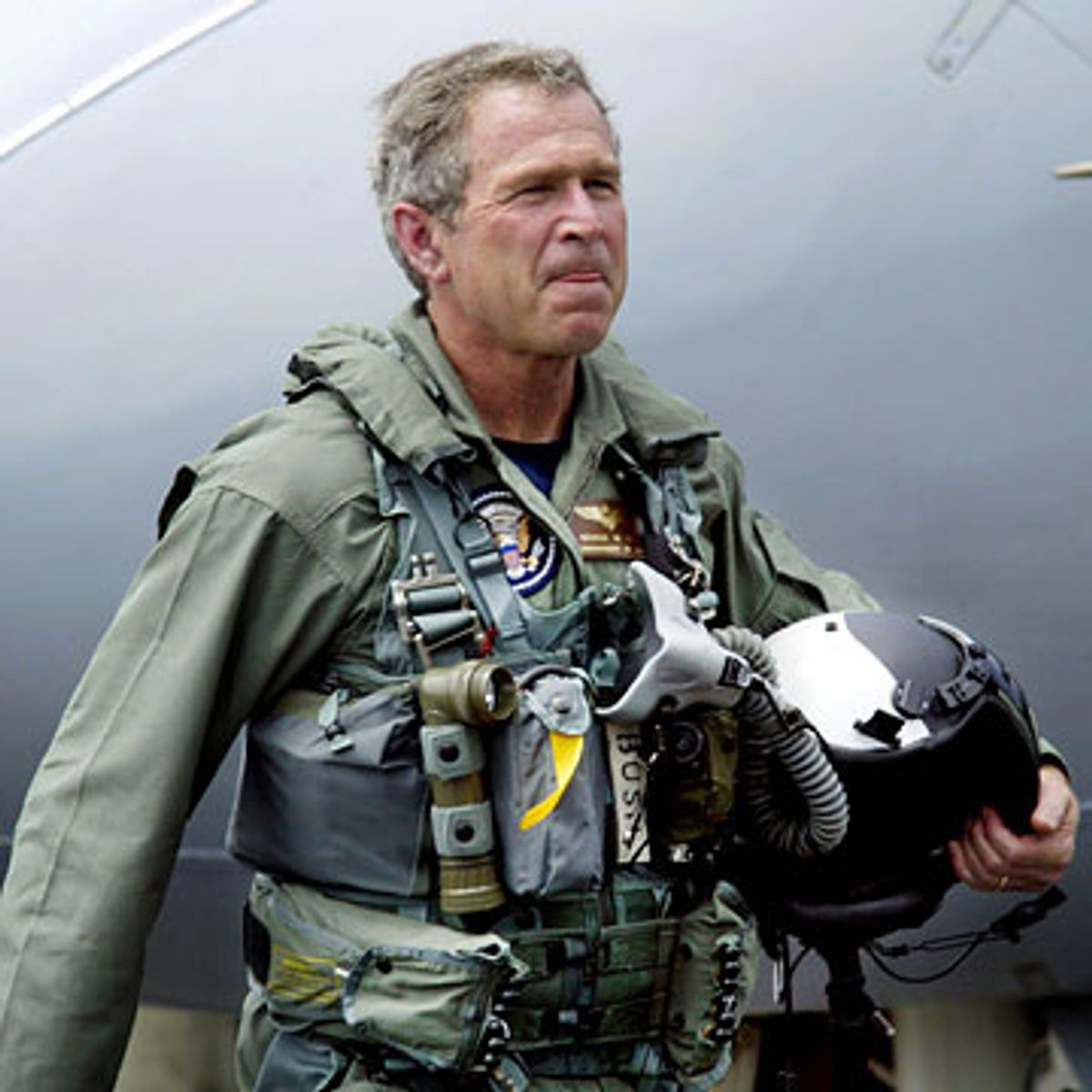 The sins of the George W. Bush era were many. It was a time of shrill ideology, naked greed and staggering incompetence. But perhaps its most toxic legacy has passed almost unnoticed: cowardice.

Just how afraid Bush was, and how deeply his fear distorted our national values, only truly became clear on Thursday, Jan. 22. On that memorable day, President Obama signed four executive orders ending the CIA's use of secret overseas prisons, directing that Guantánamo be closed within a year, halting military commission proceedings against detainees held there, and, most important, forbidding the use of torture in interrogations. "The U.S. intends to prosecute the ongoing struggle against violence and terror but in a manner consistent with our values and ideals," Obama said.

By signing those four executive orders, Obama emphatically rejected Bush's warped vision of America, and announced the return of the confident, principled country we all believed in, and too cavalierly took for granted. With a few strokes of the pen, he began to erase the ugly ethos that dishonored us for eight years, and called upon us to stand for a braver, better America. An America that will not abandon its moral principles at the first setback. An America that knows its real power lies not in its mighty army but in its mightier ideals.

The miasma of repressed fear that has hung over America for so long will not dissipate overnight. Right-wing pundits are shrieking that we must keep torturing to keep America safe, and claiming that if Guantánamo detainees are moved into ordinary prisons, America's cities will be the targets of terrorist attacks. These boogeymen have been effective for years, and they will not instantly disappear. But since Obama's repudiation of Bush's hide-under-the-bed-and-shoot ethos, the country already feels more like the home of the brave and less like a land of furtive torturers.

When you think of the Bush presidency, fear isn't the first thing that comes to mind. The cowboy swagger, the macho "bring it on" boasts, the loud declarations of a "war on terror," the endless statements that we were going to fight until final victory -- the president and his administration came across like John Wayne, not Walter Mitty. Secretary of Defense Donald Rumsfeld carried the Biggus Dickus role to extremes, turning press conferences into a testosterone-spraying contest, treating anyone who dared to question his brilliant Iraq tactics, his fleet of unarmored Humvees or his pie-in-the-sky ideas about a tiny new high-tech army like a 98-pound weakling. And the approach worked like a charm: Congressional Democrats and the mainstream media, fearful of being painted as "weak on national security," waggled their derrieres in the air like lower-status baboons deferring to a group of alpha males.

But behind their posturing, Bush, his manly-men cronies and their right-wing cheering section were trembling weenies who fled their posts at the first shot. In a perfect world, they would not only be dragged before the International Criminal Court for their crimes, but suffer public branding for desertion, their bars ripped off and their sabers broken as in the opening scene in the old Chuck Connors TV show "Branded."

Bush allowed a tiny band of fanatics, led by a turbaned bozo hiding in a cave, to so terrify him that he abandoned his sworn duty to preserve, protect and defend the United States and what it stands for. Like a nervous, inexperienced general who panics at an enemy feint and pours troops from both wings into the skirmish, exposing his army's flanks, Bush completely lost sight of both strategy and tactics. Unmanned by fear, he treated a small group of Salafi jihadists who managed to get in a lucky strike as if they were a monstrous, apocalyptic entity from an evil galaxy beyond space and time, an army of Satanists endowed with inhuman powers. Then, having created this phantasmagorical enemy out of some right-wing biblical sci-fi novel, he proceeded to fight it by trashing America's most cherished traditions, embracing torture and Big Brother tactics. His hysterical reaction not only increased global hatred against the U.S. and bred many more terrorists than he killed, it overburdened and severely weakened our military and allowed the real enemy to slip away.

If Bush was a student at a military college, he'd have flunked out.

The callow Bush fell into bin Laden's trap. As its name implies, terrorism is intended to terrify. Its strategic motivation, insofar as it has one, is to make those who are terrified react in irrational, self-defeating ways. The 9/11 attacks were not only terrifying, their terror was hideously spectacular. It is understandable that many Americans were so terrified and traumatized by the 9/11 attacks that they were willing to do anything, abandon any principle, to be safe. But a general, unlike a private, must be coldblooded, able to size up the battlefield situation dispassionately and move his pieces around the board like a chess player. It was Bush's responsibility to rationally evaluate the threat posed by al-Qaida and take the appropriate measures to address it. Instead, he lost his poise, declared an impossible, unwinnable and counterproductive "war on terror," gratuitously invaded a country that had nothing to do with 9/11, and ordered U.S. military and intelligence personnel to begin using Gestapo tactics.

Bush called it a "war on terror." But it was really a war of terror -- his terror.

Bush's cowardice, masquerading as he-man toughness, led him to do unforgivable things. The most glaring example is torture. In what future historians will surely regard as one of the darkest moments in American history, Bush and his cronies approved this ugliest of human behaviors -- and, appallingly, much of the country went blandly along with it.

Torturing exposes American troops to torture, degrades America's reputation and in the long run undermines our ability to win an ideological war. But the ultimate reason not to torture must go beyond instrumental logic: It must be moral. It is one of the most hallowed principles of law that it is better that 10 guilty men go free than that one innocent man be punished. A related moral principle applies to torture: Even if torture saves lives, it must never be used, simply because it is wrong. The devout Bush apparently never pondered this line from Scripture: "What profiteth a man if he gain the whole world and lose his soul?"

The same thing applies to due process and the rule of law. Closing Guantánamo and giving those indefinitely detained as "enemy combatants" real, fair trials, with rules of evidence and witnesses, will in the long run enhance our security, not weaken it. It was the U.S. judicial system, not a military tribunal, that convicted the 1993 World Trade Center bombers. Still, there is the possibility that some guilty men may go free, and some of them could be dangerous. That is a heavy price to pay for principle. But a country that believes that its ideals are more than words on a piece of paper must be prepared to pay that price.

It is appalling how easily Bush was able to convince many Americans that humanity's deepest ethical principles, the ones embraced by every world religion, were less important than a myth of total security. Alas, when fear is enshrined as national policy, it is contagious.

We have been living with fear for far too long: fear of terrorism, fear of the unknown, fear of speaking out, fear of ourselves. And fear, because it is reality-averse, begets magical thinking. Under Bush we became a nation both of cowards and of delusional fantasists. It makes sense that the same nation that swallowed Bush's fear-driven war on Iraq also believed that the market would just keep soaring until every American was rich. The dream of perfect security and instant wealth are two faces of the same debased coin.

Fear is kept alive by powerful taboos. To demand that we stop allowing our lives to be distorted by fear, or to question any of Bush's overwrought policies, was supposedly to profane the bloodshed that terrible day the towers fell. But even a national tragedy cannot be allowed to define -- and distort -- a nation forever.

Bush confronted evil with evil. He tortured, lied and flouted the law. By so doing, he deserted posts more vital than any front-line position: He abandoned the Constitution, he fled from the moral law. And we all, collectively, let him do it.

Now America has a wiser leader, one who has the self-confidence not to strut about like a two-bit bully. The apostles of fear and anger -- masquerading as being "tough on national security" -- are still entrenched and powerful. But at least the battle is joined, and those of us who for so long were derided as cowards, as appeasers, as cut-and-runners, make up a powerful army of our own. And on Thursday, we heard four trumpet blasts sounding a call to arms.