What's love got to do with it?

Republicans gush over their meeting with Obama, but that doesn't mean they're going to vote for his economic stimulus package. 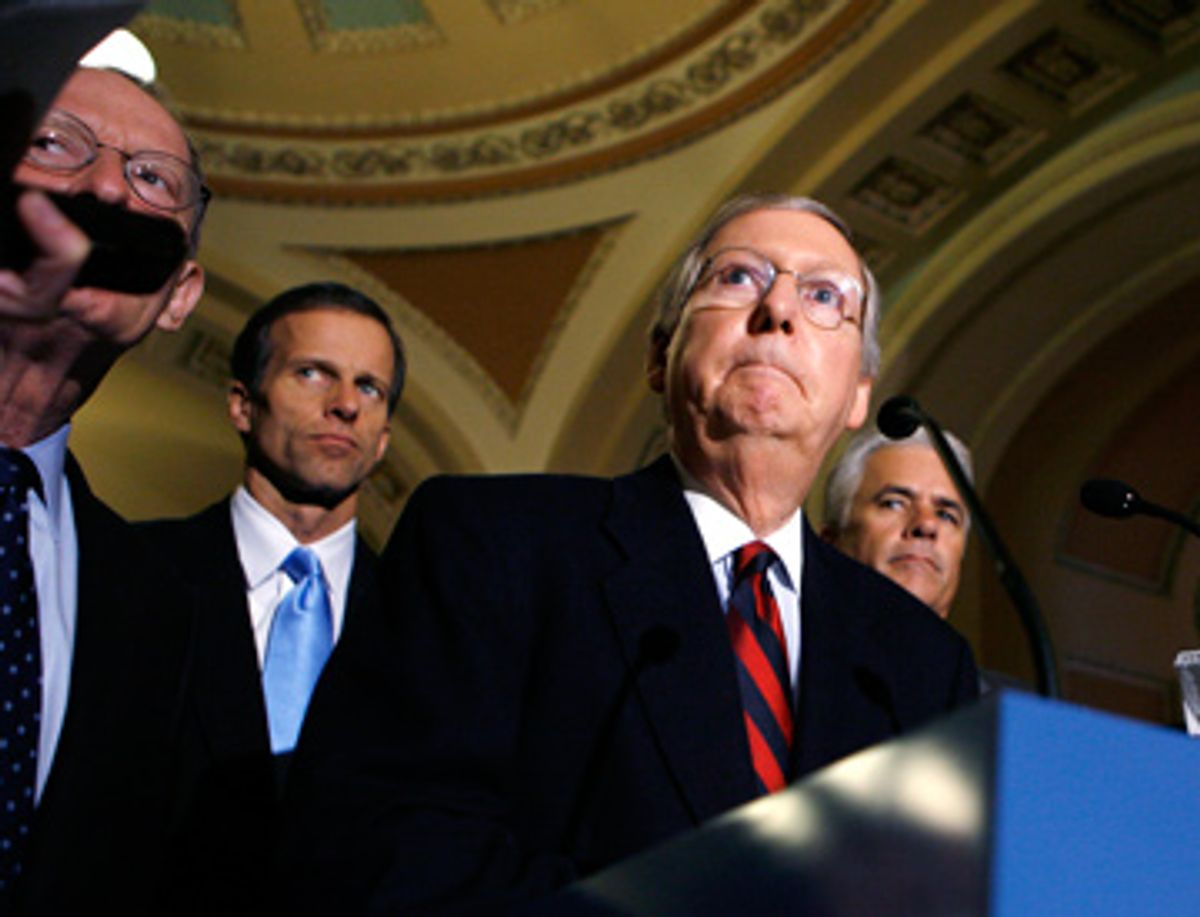 The weather was frightful here Tuesday, all snow and ice, with more forecast after nightfall. But inside the Capitol, a distinct warmth permeated the marble hallways. The warmth was coming from Republicans, who were eager to tell the world how much they enjoyed meeting with President Obama to talk about that $800-plus billion economic stimulus bill he wants Congress to pass. And it might have been as real as a televised Yule Log.

"We just had a cordial, substantive and vigorous dialogue with the president of the United States," marveled archconservative Rep. Mike Pence of Indiana, the third-highest ranking member of the GOP House conference. "We are grateful that he would come, in this kind of an environment, and respond to questions and listen to proposals by House Republicans. We are grateful for the outreach from the White House." Over on the Senate side of the building, they were singing from the same hymnal. "Back in December I issued an invitation to the president -- the then president-elect -- to come up and join us for a lunch. And, as you know, he just did that," said Senate Republican leader Mitch McConnell of Kentucky, who emerged from Obama's hour-plus lunch with the GOP to boast about it to reporters. "I know I'm speaking for every single member of our conference that we appreciated his coming up, and enjoyed the whole exchange."

When it comes time to vote, however, all that good feeling won't mean anything. The stimulus legislation, as drafted now, won't pick up much Republican support in either the House or the Senate, even though it is larded with GOP-bait tax cuts. Republican lawmakers had plenty of love for Obama, but very little in the way of actual promises of votes. In fact, House minority leader John Boehner, R-Ohio, and whip Eric Cantor, R-Va., had already urged Republicans to vote against the stimulus before they ever met with President Obama. One GOP aide, looking ahead to Wednesday's vote in the House, predicted no more than seven of the 178 Republicans there would support the Democratic version of the bill.

To some extent, Republicans -- along with the rest of the country -- may still be getting used to having a president who realizes Congress exists as an independent branch of the federal government, and not merely as a collection of 535 minor irritants to be alternately steamrolled or ignored. As another GOP aide joked, Obama paid more attention on Tuesday to House Republicans than George W. Bush did in most of the last eight years. But there was some strategy behind the public displays of affection as well. Having looked at his 70 percent approval ratings and decided, fairly reasonably, that they can't beat Obama, the GOP is going to aim for the next best thing -- joining him. Or at least pretending to. By sounding amenable to Obama's desire for bipartisanship on the economic stimulus bill, Republicans are hoping they can either drag the legislation to the right before it passes, or drive a wedge between Obama and Democrats in Congress over how much the White House has been catering to the GOP lately.

"His biggest problem is with his own party, the Democratic Party, which seems to be drifting away from what he said he wanted, which was for the package to include at least 40 percent tax relief and to be earmark-free," McConnell said on NBC's "Today" show Tuesday morning, gleefully trying to paint his party, and not the Democrats, as Obama's best friends in town. "So he could, ironically, end up with better supporters in trying to achieve the kind of stimulus package -- which would be timely, targeted and temporary -- from us than he's getting from the Democratic majority."

What the Republicans would really like, and what their base demands, is a stimulus that relies almost entirely on tax cuts, like the alternative plan they intend to roll out Wednesday. Since they won't get that, Republicans look forward to poking fun at spending projects they can decry as wasteful. Some of the items in the Democratic draft, if taken out of context, are easily mocked. Like, for example, the $200 million to re-sod the National Mall, or the $44 million to renovate the exterior of the Agriculture Department building in Washington. Though White House press secretary Robert Gibbs defended the Mall spending on Tuesday, the administration appears to be extremely wary of letting the bill turn into yet another pork-laden Christmas tree for each member of Congress to hang his or her own little project on. For proof, just look at how quickly Obama intervened to have funding for family planning and contraception dropped from the bill after the GOP started squawking about it. Sources said Obama hinted to Republicans that he didn't love the idea of spending billions of dollars right now either, but he didn't commit to dropping any specific projects.

"The key right now is to make sure that we keep politics to a minimum," Obama said between meetings with the House and Senate GOP. "There are some legitimate philosophical differences with parts of my plan that the Republicans have, and I respect that. In some cases they may just not be as familiar with what's in the package as I would like. I don't expect a hundred percent agreement from my Republican colleagues, but I do hope that we can all put politics aside and do the American people's business right now."

Where things could get tricky for the White House is if Obama tries too hard for Republican support. There's no way he'll get the 80 Senate votes he was reportedly seeking for the stimulus earlier this month, despite the $275 billion in tax cuts in the House draft of the bill, much of it aimed at drawing the GOP on board. When, as now seems likely, that doesn't win Obama significant Republican support, some Democrats are bound to wonder why it's still in the legislation. Democrats already rebelled at the tax cuts in the original stimulus proposal the White House floated earlier this month.

"There were lots of provisions that were put in here that Republicans requested, that Republicans support, and despite that, they decided apparently not to support the bill," Rep. Chris Van Hollen of Maryland, a member of the Democratic leadership, told Salon. "I think that sends a terrible message to Americans who lose jobs every day." (Van Hollen, however, said he still thinks the tax cuts are worth keeping in the name of bipartisan consultation.)

Progressives are already wondering if the stimulus plan involves enough spending to jolt the economy into gear, and if the White House goes hunting in vain for Republican allies, it isn't likely to ease those concerns. In the end, most Democrats think Republicans would be foolish to oppose the stimulus bill. "We have choices" about which projects to try to strike out by amendment, said Sen. Ben Nelson, a centrist Nebraska Democrat who -- despite his moderate impulses -- isn't convinced tax cuts will help solve the economic crisis. "But we don't have a choice" about whether to support the bill. Of course, Republicans sounded equally dug in for now, no matter how excited they were to have Obama visit them. The warmth in the halls of the Capitol may prove fleeting.