The pope and the Jews

As his embrace of a Holocaust denier and a right-wing sect proves, Benedict just doesn't get it about the church's ongoing problem with anti-Semitism. 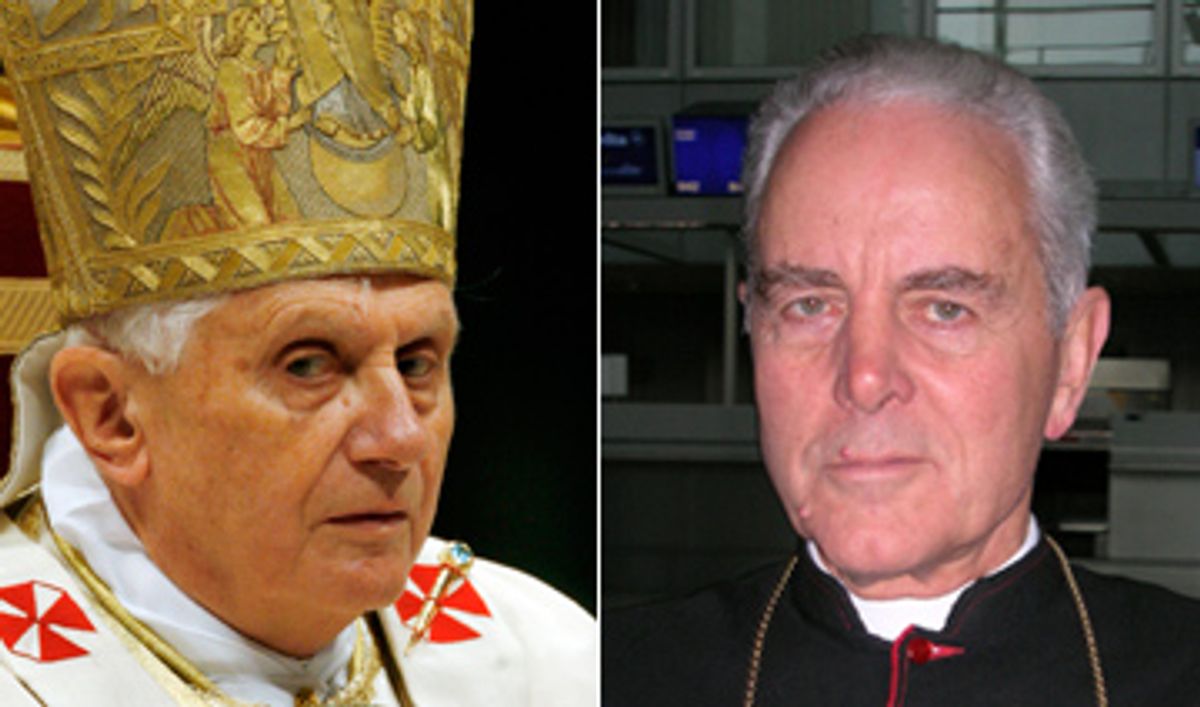 OK, Bill Donohue, just get the inevitable over with and call me anti-Catholic. Once again a pope has decided that enhancing the authority of the Vatican justifies turning a blind eye to vicious anti-Semitism, and I'm saying it's one more example of a long-standing and unresolved problem within the Catholic Church. It is not merely discouraging or problematic that Pope Benedict XVI is making nice with a Holocaust denier, or mending fences with a splinter group of ultraconservative anti-Semites, it is sick and evil. No matter how often the church issues statements condemning anti-Semitism, or holds papal concerts to commemorate the Holocaust, or says no, the Jews didn't kill Christ, the Vatican always seems caught off-guard and surprised that some people think it has a Jewish problem.

The leaders of the Catholic Church seem genuinely baffled whenever they ignore or excuse anti-Semitism and someone objects. Why, they wonder, were people so upset that the pope met with Kurt Waldheim? There was that Wehrmacht business, but didn't the former United Nations secretary general lead an otherwise exemplary life? What's wrong with Carmelite nuns erecting a huge cross at Auschwitz? Can't we just live and let live? Can't we stop harping on these unpleasant secular matters that have no significance theologically?

The latest case in point is Richard Williamson, a priest in the ultraconservative movement known as the Society of Saint Pius X. The society is a traditionalist Catholic group that rejects the reforms of Vatican II and still uses the Tridentine Latin Mass. Williamson and three other members of the society were excommunicated in 1988 when movement founder Archbishop Marcel Lefebvre, now deceased, consecrated them as bishops in spite of specific orders from Pope John Paul II not to do so. While not obeying the pope is a really big no-no and Lefebvre and his "bishops" have also gone so far as to call recent popes, including John Paul II, "heretical," the current pope has apparently decided it's time to make peace. Benedict has just rescinded the excommunication of Williamson and his three comrades. The announcement of the pope's decision came not long after Swedish television aired an interview in which Williamson denied the existence of gas chambers and said no more than 300,000 Jews had died in Nazi custody.

But, hey, Hillary made up with Obama, so why can't Benedict do it with these guys? It's not like he's trying to build a big church where everyone is welcome. Since becoming pope in 2005, Benedict has been quite clear that on any issue that concerns greater democracy or diversity in the church, or women and homosexuality generally, no détente is likely. He seems to want a small, obedient church, and the ultraconservative Lefebvrists, if brought back into the fold, are likely to be formidable allies in that effort. First, they are men; second, they are clerics; third, they were validly (if illicitly) consecrated bishops. They also have money and the support of some powerful lay Catholics, a bit like Opus Dei.

The ultra-right political views of the Lefebvrists were not unknown to church leaders who offered to lift the excommunication. Lefebvre had spoken despairingly of how the Allied liberation of France from the Nazis represented "the victory of Freemasonry against the Catholic order of [Vichy leader Marshal] Petain," and his movement had given sanctuary to the fugitive French collaborator Paul Touvier, who was arrested in the society's priory in Nice in 1989. Touvier was charged and convicted of ordering the assassination of seven Jews in Lyon in 1944 as well as other crimes against humanity. A priest of the order sat beside him during his trial as his spiritual advisor. Lefebvre supported the Front National Party of Jean-Marie Le Pen, claiming the support was based on Le Pen's opposition to abortion.

A 2006 report by the Southern Poverty Law Center accused the American branch of the society of anti-Semitism, citing among other offenses a 1997 article in the Angelus suggesting that Jews should be locked in ghettos because they kill Christians. Williamson, who has become the center of concern among Jewish groups who have commented on the Vatican's lifting of the excommunication and efforts to heal the schism, goes far beyond just consigning Jews to the ghetto. He is an outright Holocaust denier. The Vatican reaction to the widespread alarm and condemnation that followed its rapprochement with Williamson is pro forma and appalling. Williamson's views on the Holocaust, says church leadership, are not those of the church. Williamson was not excommunicated for those beliefs, and the lifting of the excommunication has nothing to do with them. His opinions on the Holocaust and the Jews are secular. End of story.

But the story is unending. Soon we will see the architect of the Reichskonkordat, another Pope Pius ( the Xll), made a saint. His canonization is in process. As with Benedict, Jews were just not high on his agenda; theo-politics was more important. In the 1933 Concordat he negotiated with Hitler while he was Vatican secretary of state, Pius agreed the Catholic Church would stay out of German politics in return for preserving, indeed expanding, church privileges and authority. The Concordat revoked the church's ban on Catholics joining the Nazi Party and the Vatican pledged that German bishops would obey and honor the German state. Guenter Lewy's seminal work "The Catholic Church and Nazi Germany" asserted that "there is general agreement that the Concordat increased substantially the prestige of Hitler's regime around the world."

And some still wonder why the Catholic Church gets criticized. The last acceptable prejudice, they claim, is anti-Catholicism. Are these people serious? The Vatican has been getting away with anti-Semitism for centuries. Isn't it time we all said, "Enough"?