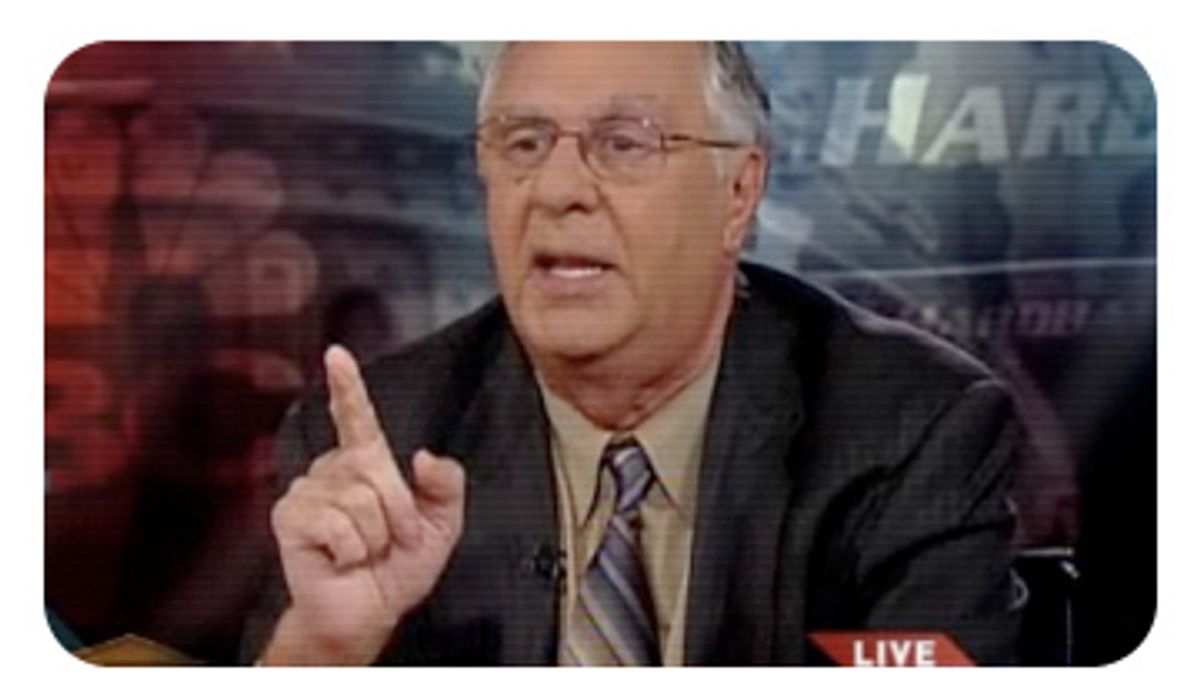 Numerous people have commented on the deeply repellent behavior from former GOP House Majority Leader Dick Armey on Hardball yesterday, when he appeared with Salon's Joan Walsh.  You can watch the video here.  After dismissively cackling every time Walsh spoke, Armey finally spat at her:  "I am so damn glad that you could never be my wife, 'cause I surely wouldn't have to listen to that prattle from you every day."  I want to focus on two points highlighted by this episode:

First, Dick Armey isn't some obscure, aberrational Republican.  He was one of the key leaders of the so-called "Gingrich Revolution" of the 1990s, when the modern incarnation of the Republican Party fully degenerated into the crazed, primitive, regional mess that it is today.  He wasn't a back-bencher.  He was the Republicans' House Majority Leader for eight years -- from 1995 to 2003 (when he left Congress, failed to have his son elected to his seat, and was replaced as the GOP's House Majority Leader by Tom DeLay).

People like Dick Armey -- and Rush Limbaugh or Sean Hannity -- are the face of today's GOP, its heart and soul.  Armey, who once notoriously referred to Barney Frank as "Barney Fag," comes from a faction -- the Texas Republican Party -- that continues to advocate formally in its 2008 Party Platform (.pdf), among so many wonderful planks, that sex between gay people be criminalized and that all gay citizens be denied the most basic rights, including even the right to adopt children and to have custody over their own children [p.12]:

We also believe that no homosexual or any individual convicted of child abuse or molestation should have the right to custody or adoption of a minor child, and that visitation by such persons with a minor child should be prohibited [p. 14]. . . .

The Texas GOP wants creationism taught in the public schools alongside evolution and given "equal treatment" [p. 17]; Guantanamo to remain opened [p. 24]; the U.S. military to remain in Iraq with no timetable for withdrawal [p. 24]; and extraordinary medical care to be denied to all prisoners except for those who can pay for it themselves [p. 19].

The party's 2008 Platform also demands that the U.S. -- this is really what it says -- "cease strong arming Israel" by pressuring them "to make future diplomatic concessions, such as giving up land to the Palestinians on the West Bank" [p. 24].  American policy towards Israel, they argue, should be "based on God's biblical promise to bless those who bless Israel and curse those who curse Israel and we further invite other nations and organizations to enjoy the benefit of that promise" [p. 24].   Armey himself, in a 2002 Hardball appearance, advocated that Palestinians should "leave" the West Bank and Gaza (which Armey believes is part of Israel) and go somewhere else.  His state party's Platform also wants the U.S. to "immediately rescind our membership in, as well as financial and military contributions to, the United Nations" [p. 25] .

These are the people who have largely been in power for the last two decades and the country is in the shape one would expect it to be in as a result.  That's why all of this chatter about post-partisan transcendence and trans-partisan harmony and the like is so inane.

Why would anyone think that "common ground," on any consistent basis, can be found with people like this, or that it would be beneficial to eliminate real differences in order to accommodate their views?  People in this country -- like most countries -- have radically different views of things, and politics is about having those ideas compete with one another for persuasive supremacy.  This compulsion to eliminate differences and disharmony in pursuit of some feel-good, trans-partisan consensus is not only futile but also destructive.  Why would it be a good idea to mold one's beliefs and actions to induce the assent of the Dick Armeys and the Texas GOPs, even if that could be done?

Second, Republicans have made about as clear as possible that even though they'll pay lip service to "bipartisanship," they don't actually want that.  The principal criticism Armey was launching at Joan Walsh in that Hardball segment was that she, along with most people, degrade our politics generally, and our economic debates specifically, by turning them into partisan wars.  We should rise above that for the good of the country, Armey repeatedly intoned.

But please go read the email that John Cole posted last night about the stimulus package which the very same Dick "Post-Partisan" Armey was sending around on behalf of his group FreedomWorks, on the very day he was on Hardball excoriating those who want to politicize our economic debates.  Armey's mass-emailed screed urges opposition to the stimulus package as nothing more than "the Left’s Multi-Billion Dollar Handout to Liberal Allies."

As I've documented many times before, Beltway "bipartisanship" means that Democrats adopt as many GOP beliefs as possible so what ultimately is done resembles Republican policies as much as possible (anyone doubting that should simply review these "bipartisan" votes of the last eight years).   I'm glad that the stimulus package yesterday -- which Democrats watered down and comprised on as much as possible to please Republicans -- did not attract even a single Republican vote in the House:  not one.

Republicans aren't interested in "bipartisanship" except to the extent that they can force Democrats to enact their policies even though they have only a small minority thanks to being so forcefully rejected by the citizenry.  And why should they be interested in bipartisanship?  Why should they vote for a stimulus package that they don't support and that is anathema to what their most ardent supporters believe?  It's very hard to find any virtuous attribute of the contemporary Republican Party, but one thing that can be said for them is that -- unlike Democrats, whose overarching desire in life is to please the needy harmony fetishists by adopting as many GOP views as possible  -- Republicans are willing to incur criticisms by opposing what they oppose and supporting what they support.

And that's how it should be.  As Atrios wrote yesterday:

If I were advising the Republicans I would've told them to vote against the stimulus package. I would tell them to make the point clearly that if they were in charge, the bill would be a different bill. They're a competing political party and they need to, you know, highlight the fact that their vision for America is actually different. I appreciate that members of both parties don't always toe the line completely, but on a bill as big as this it makes perfect sense for it to play out as it did.

Of course the flip side is that Dems should've pushed the best plan that could pass the Senate instead of pushing some pointless fantasy about bipartisanship.

Some Obama supporters will claim that the whole post-partisan song is nothing more than a political game, a super-shrewd, exotic political tactic Obama is employing in order to cast the GOP as obstructionists.  But if so, that's a Beltway tactic almost as old as Obama himself.  Media Broderites and The Third Way have been demanding for decades that Democrats move as close as possible to Republicans in the name of overcoming partisanship (for instance, watch as Time's Joe Klein desperately tries to convince Dick Armey himself not to view Klein as a radical who is far away from Armey, but rather, that they're both "playing between the 40-yard-lines here").

Partisan disputes happen because people are very different and have very different views.  Partisanship is about advocating for your own beliefs and discrediting the beliefs that you reject and believe are harmful.  This doesn't mean that these disagreements must or should break down along Republican/Democratic lines.  On so many critical, contentious issues, the leadership of the two parties are in perfect harmony. Many of the worst policies are embraced by the mainstream of both parties, and the real disagreements now break down on other lines, whether it be insider/outsider or diverging socioeconomic interests or rapidly-re-aligning ideological divisions.  But politics is and should be about defeating ideas -- and people -- that are discredited and destructive.

To see why that's a good thing, not a bad thing, go watch the Dick Armey video or read the platform of the Texas GOP.  Or re-review what has happened over the last eight years.  The further away one is from that morass, the better; the closer one is to it, the worse off things will be.

UPDATE:  Those claiming that Obama has masterfully depicted the Republicans as arrogant obstructionists by extending the hand of compromise should review this latest Rasmussen Reports poll, which finds the public split almost evenly on whether they support the Obama/Democratic economic recovery package, with a clear trend towards increased opposition.

This is what happens every single time:  the Democrats do everything possible to "accommodate" the Republican position and then get attacked anyway (they voted in large numbers for the Iraq War in and then got attacked for being soft on Terror in 2002; they voted for virtually every Bush "Terrorism" policy and the same thing happened, etc.).  Here, they did everything possible to change their bill to please Republicans and nothing is happening except full-scale GOP opposition accompanied by a constant barrage of GOP attacks against them as big-spending, reckless, wealth-transferring liberals.

Ultimately, the success of this program will be measured by whether it produces successful results, so why shouldn't Democrats use their majority to enact the policy they think is most likely to achieve that?  That's true on this issue and in general.

UPDATE II:  In the media narrative, here is what Obama has to show for his efforts to change the bill in order to please Republicans.