Renee Zellweger lays off employees and skates on thin ice in this aggressively heartwarming romantic comedy. 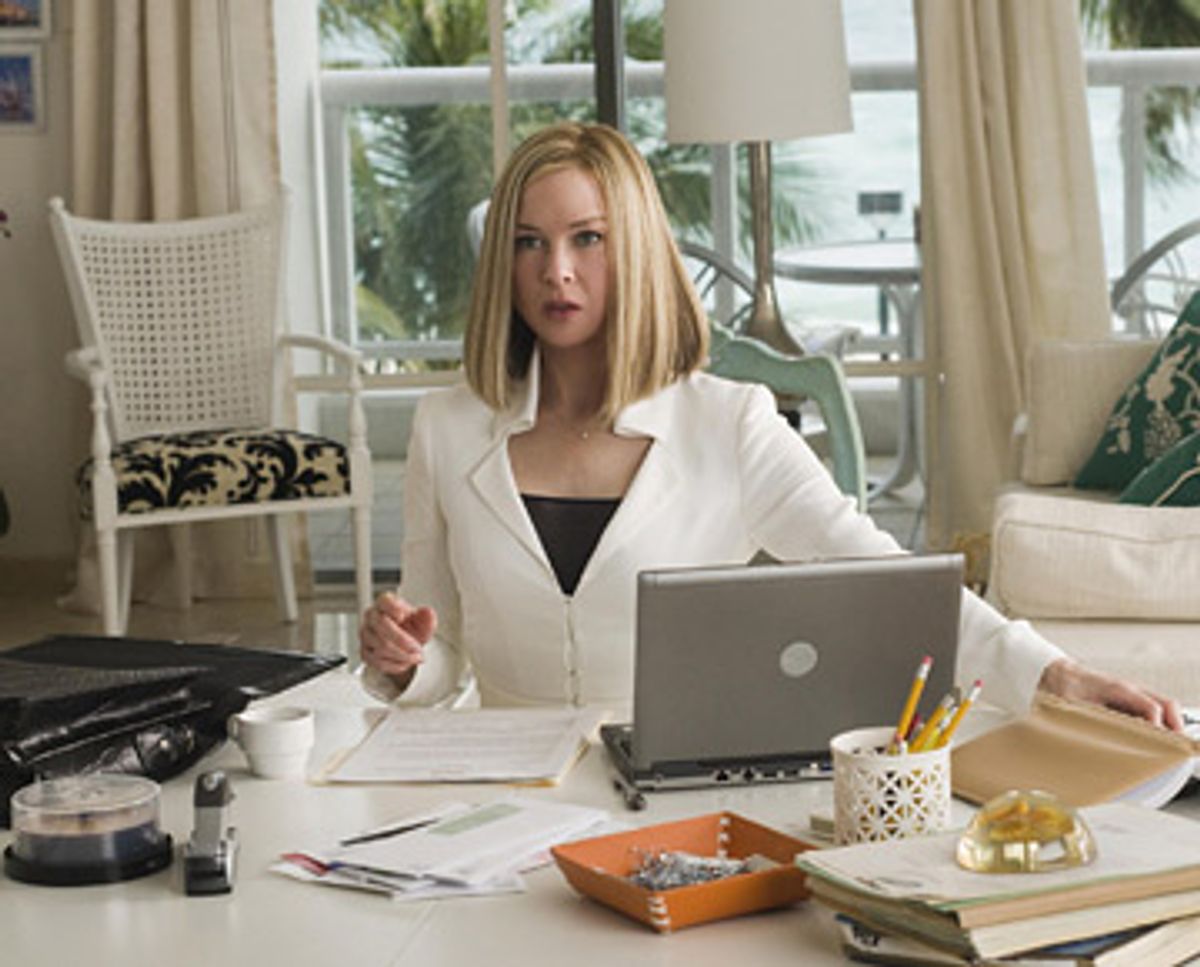 Hold on to your toques. The romantic comedy "New in Town," in which Renée Zellweger plays a female executive who's transferred from the big city to small-town Minnesota, opens with a scrapbooking scene. That's right: a group of women sit at a table pasting photographs and little bits of colored paper into elaborately decorated bound volumes. Exceedingly sensitive viewers, as well as recent patients of open-heart surgery, are advised to avoid "New in Town," as the excitement may just be too much.

On second thought, maybe just about everyone should stay away from this drearily cheerful little picture that isn't nearly as funny or as heartwarming -- or even as topical, given the economic climate -- as it thinks it is. Zellweger plays Lucy Hill, a business gal from Miami whose company transfers her to Tinytown, Minn., to take over management of a food plant -- and, of course, lay off lots of workers. Even though the locals are very, very nice to her, she of course condescends to them at first. But in the movie's terms, they need to be condescended to, because, you know, they're not very bright. When Lucy expresses her pleasure at meeting her new administrative assistant, Blanche Gunderson (Siobhan Fallon Hogan), the woman gives her a blank but cheerfully helpful stare: "I'm just your secretary -- do you need me to find you one of those?" Making things worse, it's damn cold. We're treated to numerous shots of Lucy toddling over ice-slicked surfaces in her city-slicker stilettos. In the world of "New in Town," Floridians don't seem to realize that different parts of the United States actually have different weather.

On her first night in town, Lucy meets Ted Mitchell (Harry Connick Jr.), a scruffily bearded, beer-guzzling, truck-driving lout -- upon making her acquaintance, he burps and spurtles beer out of his mouth. Later, she's dismayed to learn he's the local union rep. But, as we know, all an uptight city woman really needs is the love of a good, strong, red-blooded man, so it's not hard to guess where "New in Town" is headed.

"New in Town" wouldn't be so bad if it didn't wield its folksiness like a club. The director (Danish filmmaker Jonas Elmer, making his English-language feature debut) and the screenwriters (Kenneth Rance and C. Jay Cox) work so hard to make the locals country-cute that they forget to flesh them out as people. (Fallon Hogan and J.K. Simmons, who plays a gruff plant manager, work hard to stretch their characters beyond their constraining stereotypes, and sometimes they succeed.) The leads don't seem particularly at home in these aggressively homey surroundings, either. Zellweger is capable of being both a charming actress and a disarming one -- just not here. She can't help being cute, but she's long past the point at which she can simply coast on her squinched-up pout, and her performance here is wearyingly self-conscious. It doesn't help that she's required to make the obligatory speeches about what a strong, capable woman she is, only to get her comeuppance when she finds herself stuck in a massive snowdrift and requiring rescue. And Connick, a likable and underrated actor, is better than the material warrants. He has a slightly goofy quality that dissolves some of the idiotic machismo the script has stuck him with.

But together, Zellweger and Connick appear to be just getting the job done -- there's a jocular affinity between their characters, but not much spark. Meanwhile, the locals, dressed in their floral embroidered sweat shirts and plaid flannel, beam approvingly at the couple before returning to their bar stools and their baking. You could say "New in Town" is poking fun, affectionately, at stereotypes -- Fallon Hogan's character even delivers a heartfelt speech about that late in the movie. And it probably is the first movie to use scrapbooking as a dramatic device. Let's also hope it's the last.