Welcome to the Republican National Committee's winter meeting -- and the GOP's alternate reality, where happy days are nearly here again. 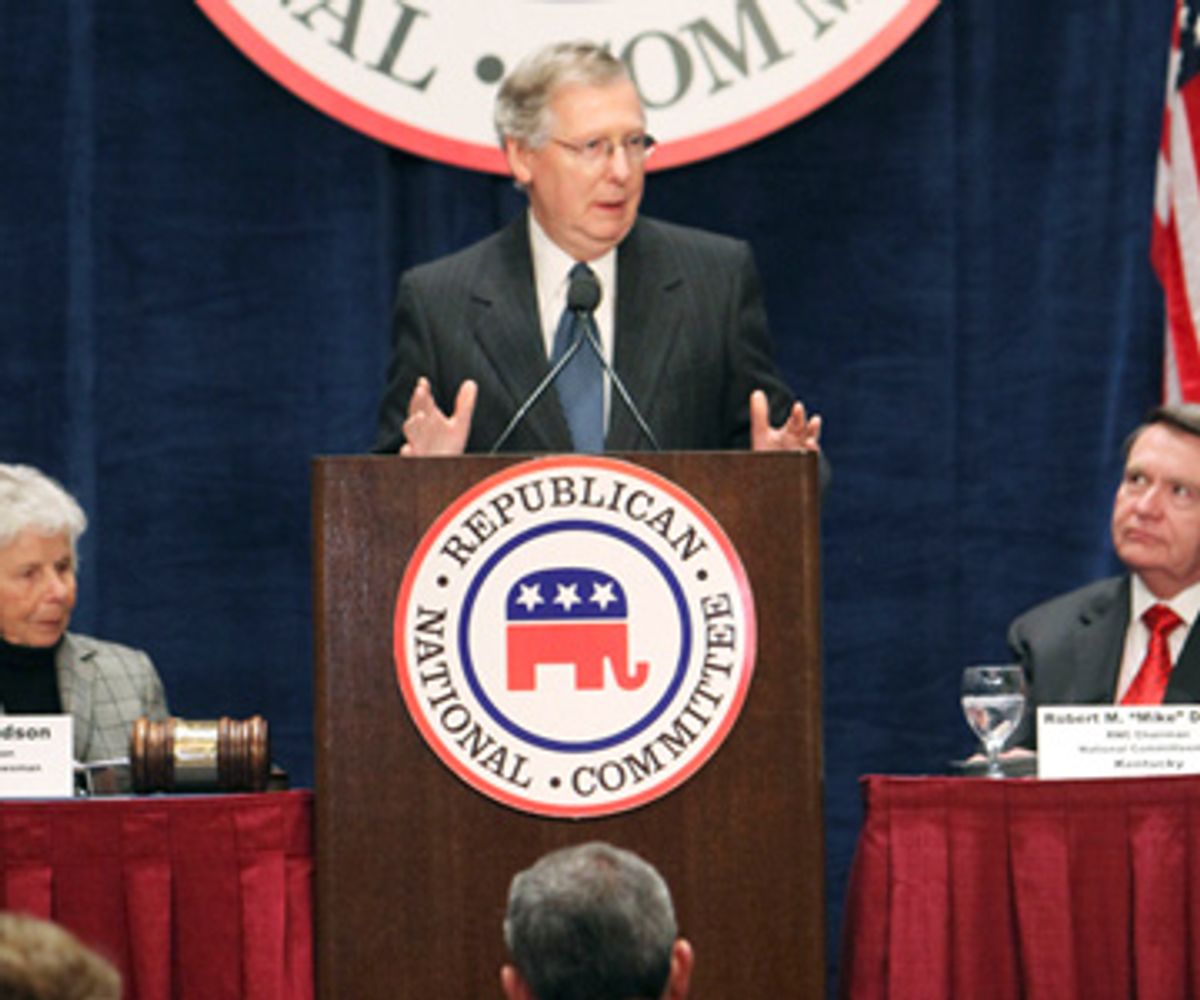 The eager band of volunteers standing in the lobby of the Washington Hilton as the Republican National Committee winter meeting rolled into its second day made for a strange sight Thursday afternoon. One part Wal-Mart greeters to two parts Alex P. Keaton, they wore the sartorial train wreck that has become the unofficial uniform of young Washington apparatchiks trying to look "grassroots": a T-shirt, in this case bright blue, over a button-down shirt and dress slacks. "The comeback starts now!" their T-shirts declared. Nearby, a few had taken their laptops and commandeered a table by the hotel bar to live Twitter the afternoon's festivities on behalf of their choice for RNC chairman, Michigan GOP boss Saul Anuzis. An aide to one of Anuzis' rivals, meanwhile, whispered to reporters about the scandalous rumor making the rounds of the meeting: Some of the volunteers, allegedly, were one-time devotees of Ron Paul.

That's the state to which the Republican Party has been reduced -- a tiny knot of true believers engaged in a cutthroat battle to win a majority of the GOP's 168 national committee members. It's a voting population so small it makes student government elections seem complicated by comparison. And it's also a very narrow demographic, with a unique, perhaps eccentric, view of the world. If the mood and the speeches at the winter meeting are any guide, Republicans are seeking refuge from electoral defeat in an alternate reality, one where the public still loves them -- or would if they could only improve their sales pitch. And where going along with President Obama's agenda just isn't in the cards.

To the Republican base, and the members gathered at the Hilton, the House GOP's unanimous, losing vote against an economic stimulus bill on Wednesday wasn't a Bronx cheer aimed at a popular new president, but rather a heroic stand on behalf of the American public. Playing to the hardcore grass roots, the party's leaders made clear Thursday that they plan to stick to their new formula, the one they think will lead them back from the wilderness -- even if it sounds pretty similar to the one that got them there in the first place.

"The first task, in my view, is to find the voters who've left the party," Senate Minority Leader Mitch McConnell, R-Ky., told the RNC. "As we do this, the temptation for some will be to run from our principles or to dilute our message. I think that's a temptation we need to resist. These people were Republican for a reason. You don't get them back by pretending to be something else. And you certainly don't gain voters by running away from the ones that are most loyal."

The hotel wasn't completely a safe zone for GOP revival fantasies; the lobby's gift shop was full of leftover swag from Obama's inauguration, though business looked pretty slow. But the crowd at the RNC ate up the GOP dream weaving. The party does have problems, McConnell told them, but they're all about image: "Ask most people what Republicans think about immigrants, and they'll say we fear them. Ask most people what we think about the environment, and they'll say we don't care about it. Ask most people what we think about the family, and they'll tell you we don't -- until about a month before Election Day." But the solution to all that isn't to change policies, he said; it's just to communicate them better. His first example? "Workers need to know that we're not anti-union -- we're pro-employee."

That McConnell delivered such a relatively rosy message on the day a Gallup Poll found Republicans have only five reliably red states left isn't necessarily surprising. The GOP hasn't shown much sign of realizing how much trouble it's in; McConnell and his House counterpart, John Boehner of Ohio -- who led the charge against the stimulus bill -- were easily reelected to their leadership posts despite two consecutive election cycles in which Republicans lost a total of 13 Senate seats and 51 House seats. Current RNC chair Mike Duncan is considered a slight favorite to retain the job, even after Obama wiped the map with John McCain in the presidential election, winning such Democratic strongholds as North Carolina, Virginia and Indiana. Even one of Duncan's leading rivals, South Carolina party chairman Katon Dawson, talked as if the party had already turned a corner. "You've got to understand you've got a problem before you can fix it," he told Salon. "We now understand, after two cycles, we've got a problem."

But his prescription for fixing it, and the one that many of the voting RNC members seem to favor, appears to play more toward Rush Limbaugh than Barack Obama. "There was a sense of pride I had yesterday in being a Republican," Dawson said, smiling, when asked about the vote against the stimulus bill. Another RNC member, West Virginia national committeewoman Donna Lou Gosney, said she didn't want her party working with Obama much. "I know this is probably not going to come out right, and it will be an awful quote," she said. "But I'm not really one that wants Obama to succeed when he talks about nationalizing medicine, Medicare, and when he talks about closing Guantánamo, and when he talks about just throwing money at things." Duncan, for his part, said Republicans were "in a position of strength today."

"The Democrats mean to use this opportunity of unchallenged power to explode the size and scope of the federal government, to take control of entire sectors of our economy, to crush the conservative opposition through parliamentary procedure and redistricting," he told RNC members, winning applause. "The goal is to indoctrinate a generation of American children to the gentle comforts of the nanny state ... The only thing standing between their agenda and success is the Republican Party."

That is, of course, exactly what Democrats want voters to remember when they go to the polls in 2010 -- that the Republicans' first instinct was to stand between Obama's agenda and success. In fact, as Duncan launched into his jeremiad, a coalition of unions and liberal activist groups announced plans to run TV and radio commercials against vulnerable Republicans with just that message. "Are you with Limbaugh, or are you with the Obama plan to create nearly 4 million jobs?" is the underlying question behind the commercials, said Brad Woodhouse, the head of the coalition, Americans United for Change. The GOP seems to have settled on its answer already.