The "defense cut" falsehood from The Washington Post and Robert Kagan

Barack Obama proposes to spend $40 billion more on defense spending this year than was spent last year. Why is he being attacked for "cutting the defense budget"?

Even for the standard-less Washington Post Op-Ed page, which will publish any version of neocon claptrap regardless of how factually false it is, this is rather striking:

Barack Obama campaigned on a platform of increased defense spending.  True to his word, Obama's 2010 fiscal year budget calls for $527 billion in defense spending (not including the costs of Iraq and Afghanistan).  That is more than the U.S. allocated for defense in 2009 and equals what the Bush administration budgeted for 2010:

The Obama administration has given the Pentagon a $527 billion limit, excluding war costs, for its fiscal 2010 defense budget, an official with the White House’s Office of Management and Budget said Monday.

If enacted, that would be an 8 percent increase from the $487.7 billion allocated for fiscal 2009, and it would match what the Bush administration estimated last year for the Pentagon in fiscal 2010.

So Obama proposes that the U.S. spend $40 billion more this year than it spent last year.

Despite this, the right-wing noise machine, led by Fox News, is gearing up to accuse Obama of "cutting defense spending" (Fox headline:  "Defense Official:  Obama Calling for Defense Budget Cuts").  And today, The Washington Post publishes an Op-Ed from Robert Kagan -- who, it must be acknowledged, is a decorated member of the toughest and most noble warrior-family in America -- which is headlined:  "No Time To Cut Defense," and which repeatedly accuses Obama of plotting to slice military spending:

Pentagon officials have leaked word that the Office of Management and Budget has ordered a 10 percent cut in defense spending for the coming fiscal year, giving Defense Secretary Robert Gates a substantially smaller budget than he requested. Here are five reasons President Obama should side with Gates over the green-eyeshade boys.

It doesn't make fiscal sense to cut the defense budget when everyone is scrambling for measures to stimulate the economy . . . . Rather than cutting, the Obama administration ought to be increasing defense spending . . . .

Some unreconstructed anti-Cold Warriors from the 1980s may see the Obama revolution as a return to the good old days of battling against Ronald Reagan's defense spending.  But that's not the way Barack Obama ran for president. He didn't promise defense cuts. On the contrary, he called for additional forces for the Army and Marines. He insisted that the American military needs to remain the strongest and best-equipped in the world. In his inaugural address, President Obama reminded Americans that the nation is still at war. That being so, this is not the time to start weakening the armed forces.

Kagan hauls out every tired neoconservative tough-guy platitude to warn of all the frightening things that will happen if Obama "starts weakening the armed forces" by going forward with his so-called "cut in defense spending":  all the scary Enemies (Iran, Russia, the Pakistani military) will think we're weak and will question our ongoing willingness to rule the Middle East; "a reduction in defense spending this year would unnerve American allies"; "the announcement of a defense cutback would be taken by the world as evidence that the American retreat has begun," etc. etc.  Kagan then beats his super-tough chest and warns that "in Afghanistan, there are already concerns that the United States may be 'short of breath'" [I wonder how and why Kagan learned the need to show endless "toughness" (demonstrated by others) and to fight endless wars (waged by others) through that revealing metaphor].

How do The Washington Post and the war theorist Kagan justify repeatedly accusing Obama of "order[ing] a 10 percent cut in defense spending for the coming fiscal year" when, in fact, Obama wants to spend $40 billion more this year than was spent last year on defense spending?  It's because Obama's 2010 budget (just like Bush's) calls for slightly less in defense spending than military officials unrealistically and strategically demanded:

Some Pentagon officials and congressional conservatives are already trying to portray the OMB number as a cut by comparing it to a $584 billion draft fiscal 2010 budget request compiled last fall by the Joint Chiefs of Staff.

The $527 billion figure is “what the Bush people thought was the right number last February and that’s the number we’re going with,” said the OMB official, who declined to be identified. “The Joint Chiefs did that to lay down a marker for the incoming administration that was unrealistic. It’s more of a wish list than anything else.”

Defense budget experts have said the draft by the Joint Chiefs, which was never publicly released, was designed to pressure the Obama administration to drastically increase defense spending or be forced to defend a reluctance to do so. Defense officials in past outgoing administrations have left inflated budget estimates for incoming officials in the hope of raising the spending baseline.

That's how a $40 billion increase in defense spending is depicted in The Washington Post as a paralyzing "cut in defense spending."  To get a sense for how completely propagandistic and deceitful is this emerging claim, consider this chart showing the trend of American defense spending over the last decade if Obama's 2010 budget were approved in full: 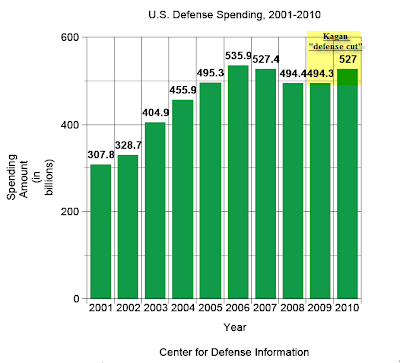 In the world of the Kagans and The Washington Post, that increasing line from 2009 to 2010 is called a "cut in defense spending."

Independent of the deceit in which this accusation is grounded, the idea that the world will perceive that the U.S. is no longer as militaristic and militarized if we fail to increase military spending even more than Obama already proposes is about as self-evidently ludicrous a claim as can be imagined (leaving aside the question of whether that change in perception would be a good thing).  Here, from the Center for Arms Control and Proliferation, is a chart expressing American military spending in 2008 (including Iraq and Afghanistan) relative to military spending by the rest of the planet: 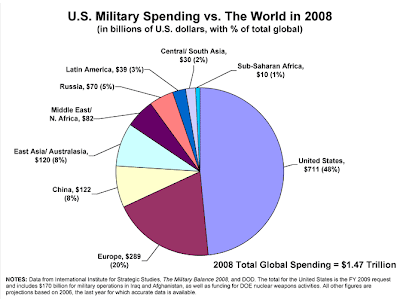 These facts should be familiar by now:  by itself, the U.S. spends almost as much on its military as every other nation in the world combined.  It spends almost 7 times as much as the next-largest defense spender (China).  We invade, occupy and bomb other countries far more than any other nation in the world (only one other country is even close).  These figures don't even include the massive amounts we spend in aid to militarize other countries.  Even in light of all that, Barack Obama wants to increase America's defense spending.  Yet Robert Kagan is shrilly warning that people will disrespect and laugh at him the U.S. for being "short of breath" unless we show everyone how tough and strong and powerful and Churchillian we are by spending even more.

It's unrealistic to expect that tough-guy neoconservatives will ever stop these deceitful, chest-beating war dances.  It's who they are and what they need.  And part of this is Obama's doing for leaving in place so many Bush officials at the Pentagon who are now undermining him with this leak-driven campaign (and see this analysis of how, led by David Petraeus, they are doing the same thing in trying to sabotage Obama's Iraq-withdrawal plan).  But -- at least in the abstract, in theory -- it shouldn't be unrealistic to expect The Washington Post to refrain from publishing blatant factually false claims in service of those war dances (i.e.,: Obama "ordered a 10 percent cut in defense spending for the coming fiscal year").  In reality, though, serving the war agenda with factually false claims is one of the prime purposes of that newspaper's Op-Ed page and, at times, its news pages as well.

See also:  this post from earlier today on the profound wisdom of Bob Dole regarding the Tom Daschle matter.

UPDATE:  In comments, casual_observer notes correctly:  "Social Security is not the third rail of politics--Defense Spending is. Our defense spending is simply not sustainable, but its constituents are so powerful and pervasive that any change in the spending trajectory simply cannot be considered."

This is true despite the fact that, every year, more and more Americans believe that we are spending too much on defense, to the point where large pluralities now believe defense spending should be cut.  Therefore, this is yet another example where bi-partisan elite consensus, driven by its own self-interest, simply ignores -- outright refuses to acknowledge -- widespread public opinion.

UPDATE III:  The author of the above-cited CQ story regarding Obama's budget request, Josh Rogin, just emailed me, advising that he has corrected his story to reflect that last year's defense spending total was $513 billion, not $487.7 billion as he originally reported (and as I quoted).  Thus, the increase sought by Obama in total defense spending is $14 billion rather than $40 billion.  Obviously, that doesn't change any of the points made here -- Obama is still seeking a sizable increase in the "defense" budget, not a "cut" -- but I did want to note CQ's revision to its story.