Nappy or relaxed, African-American hair has always been a loaded subject. So what does it mean to have a black do in the White House? 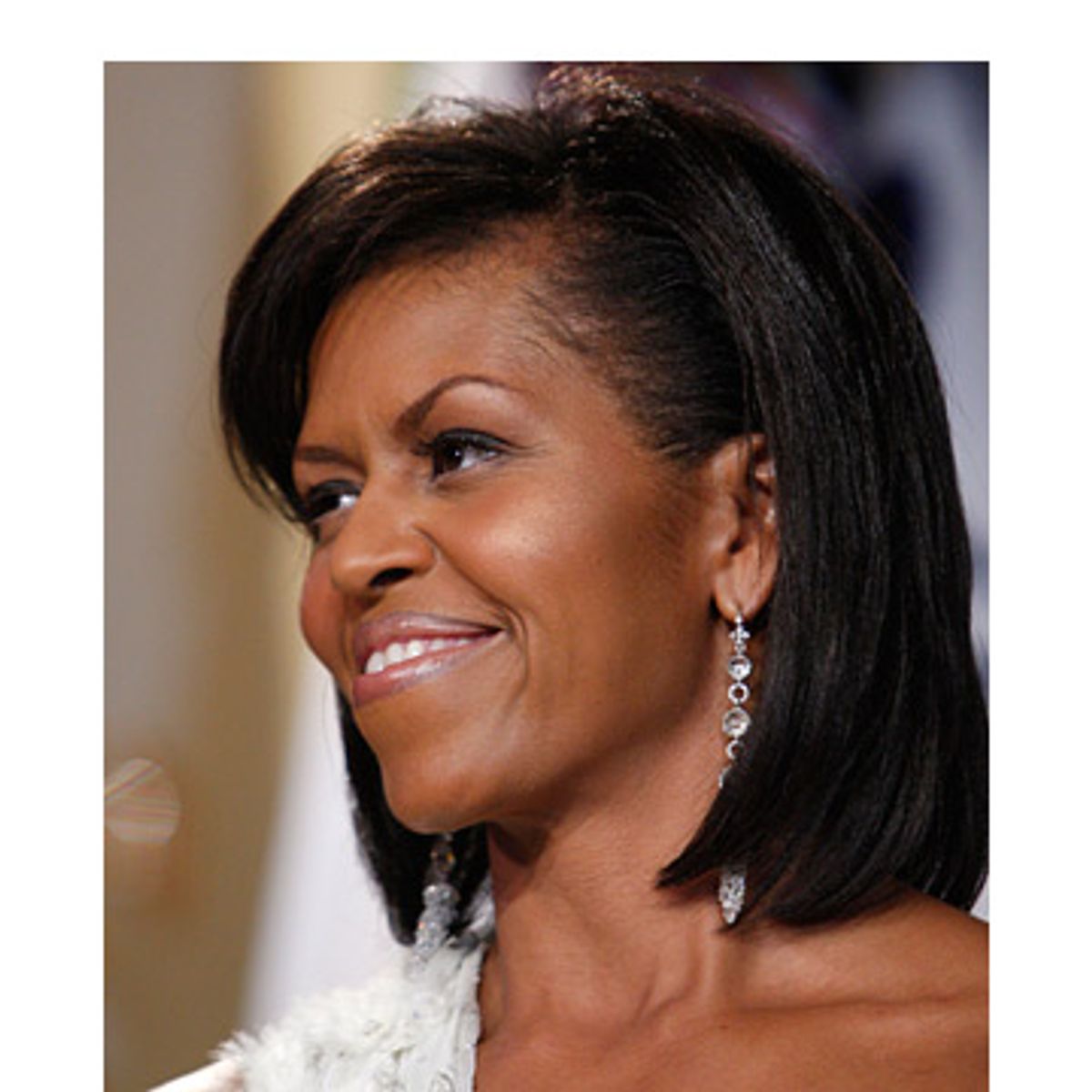 Are we moving toward a "black hair" moment?

It might sound like one of those media-created, racially overwrought questions meant to boost ratings and Internet chatter. But with Obama in the White House and a black family center stage -- not to mention a first lady whose appearance and fashion choices are already being endlessly dissected -- the question suddenly becomes almost reasonable.

Consider: Michelle's hairdresser, Johnny Wright, just signed a development deal for his own beauty reality show. Chris Rock recently went to Sundance to screen his documentary "A Good Hair Day," a look at the enormous but mostly unexamined industry and culture of black hair care. "[Black women's] hair costs more than anything they wear," Rock recently said in a Salon interview. "It's like the No. 2, 3 expense of their whole life." Meanwhile, in a recent discussion on MSNBC, black Princeton prof Melissa Harris-Lacewell agreed with Rachel Maddow that an Obama administration meant white people would be more emboldened to ask black people about previously taboo issues, like how they do their hair (Harris-Lacewell admitted she wasn't looking forward to that). The interest is encouraging to a point. And like all white scrutiny of any aspect of black life, it also feels like voyeurism, to a point. The gray area is just one of many reminders that bridging the racial divide, like black hair itself, is going to be complicated.

But first, let's take a look at Michelle. Her hair represents the highest aspirations and also the limitations of a certain black style. It's always immaculately done, straight and shiny. On Inauguration Day, it complemented her cheekbones; it riffled gracefully in the frigid wind. Nothing wrong there at all. And that's potentially the problem: Nothing's wrong. It's perfect. It's the look Michelle's had since we've known her, and it's already starting to look locked in, like armor (Condoleezza Rice, anyone?). Certainly first ladies have their signature looks, including hair -- Nancy Reagan's coif never moved an inch in eight years, wind or no. But I wonder whether such a young, high-profile black woman who gets her hair straightened or relaxed as a matter of course will occasionally let it be something different: unstraightened, less straightened, or anything that doesn't bounce, lie flat or swing like a pageboy. In other words, a do that suggests her ethnicity rather than softens it.

I know firsthand how complex these choices of style and identity can be: I'm a black woman with curly hair, but it's not curly enough to be considered kinky (aka nappy) and typically black. Yet my blackness dictates perceptions and expectations about my hair; non-black people assume I have a relaxer or a weave and are always curious about what I've had "done." I've had very little in the way of chemical or heat straightening in my life, but I didn't escape black hair rituals altogether: Growing up, I wasn't allowed to wear my hair "natural" or "out" because that was simply too ethnic. To this day I have childhood anxiety about how to wear my hair for special occasions or photo-ops. Do I hot-roller it, pull it back? How do I look my best, or look like myself? Is it even possible to do both? Poised as she is, I would wager Michelle Obama asks herself such questions too.

A hair change shouldn't be a radical notion; every beauty magazine I've ever read trumpets makeovers every month. But black images -- indeed, the very idea of beauty -- are still inherently political, mirrors of our national mood about race and ancient tensions between reality and what we prefer to see. Hair is a particularly good mirror. A reality check: In this alleged new era of racial enlightenment, how would we see Michelle if she switched to braids, twists, curls or dreads, if she looked more like the black person she is? We applaud the sparkling new role models in the White House. But do we expect the Obamas to define a new black mainstream or to hew to an idealized model created by a white mainstream that blacks internalized long ago?

Hair is a very complicated piece of that model, historically speaking, as brutal a demarcation of worthiness as skin color. Hair texture and skin color work in tandem: The darker you are, the harder you have to offset it with "good" hair in order to be considered attractive or acceptable. If Michelle weren't dark-skinned with classic black features, she might not be so wedded to super-straight locks. Of course, this is also about class and station -- most professional black women of a certain pay scale adopt the relaxed look as part of the overall look of success. And then there's convenience. A good friend of mine pointed out that processed hair is often more convenient than unprocessed black hair, which requires quite a bit of maintenance and time. But she also agreed that issues like practicality are virtually impossible to separate from the pressure on black women to have relaxed hair in the first place. Which is why I suspect that even a mild curl on Michelle, à la Oprah's lioness look, would make people nervous. It was no accident that last year's instantly infamous New Yorker cover that depicted the Obamas as White House terrorists featured Michelle with a huge Afro. Barack's turban was a bad joke; Michelle's big hair was a legitimate threat that could materialize at any moment.

One of my favorite inaugural moments was the Rev. Joe Lowery invoking that crude but accurate black folk saying about the hierarchy of skin color: If you're white, you're all right; if you're brown, stick around; if you're black, get back. A parallel saying for hair gradations would be something like: If you're straight, you're great; if you got curl, you got a pearl; if you're nappy, you're unhappy. Lowery was voicing that sentiment in order to bury it, but he was also admitting that it still has great power. Weaves and relaxers have become de rigueur for black women past the age of 13. The unprocessed black woman is assumed to be a vegan, a rebel, a Rasta, a nationalist, an artist, or some combination of the above. And for a black woman to wear her hair "out" -- that is, to wear it in its natural state with minimal moderations -- well, she must be so far out on the fringe that everyday presentation doesn't matter. Most likely she's an entertainer -- Erykah Badu, Diana Ross or Rufus-era Chaka Khan. But in the real world that Michelle Obama represents and that most of us inhabit, there is no black equivalent for the wash-and-wear "out" style that white women wear all the time, and have worn for 30 years. For them, it's become so routine that we now have all sorts of expensive products meant to create untamed, wind-tossed, day-at-the-beach hair. But natural, of course, is a loaded description. You really don't want to see me with beach hair.

While I appreciate Rachel Maddow's singular ability to breach racial etiquette in a thoughtful and good-humored way, I cringe at the thought of once again having to educate white people who have no clue. And I don't think they really want to know about intensive black hair rituals that bond black women but can seem downright medieval to anybody else -- hot combs, chemicals, wearing scarves to bed. It's absurd and not a little maddening to think of all this as being a "moment" for whites, when it's so much ancient history for us.

The way out of this tangle is, I believe, Sasha and Malia Obama. Throughout the campaign and  the inaugural, they were regularly pressed and straightened for the public -- "Sunday hair," we used to call it. And like their mom, they look wonderful. Adorable. But the public also sees that in the girls' everyday lives, they literally let their hair down with braids and cornrows and puffs and whatever else black girls wear. Now that they're no longer groomed for the Corn Belt voters on the campaign trail, I see the Obama girls casually affirming the black mainstream in a way perhaps their parents can't yet. It helps that they are wildly popular now amongst pre-teen girls of all colors; there are even Sasha and Malia dolls on the market, though they don't resemble the girls much, from the hair on down. But a recent cover in the family section of the Los Angeles Sentinel, my hometown black paper, spoke volumes. One photo was Sasha and Malia dolled up for the inaugural in their Sunday hair, and the photo below it showed them at a more relaxed event -- a fourth of July outing -- sitting on picnic benches in summer clothes. Malia wore cornrows, Sasha a voluminous, unmoderated ponytail. An American flag sits in full view on the table behind them. That's a modest vision of the future and of equal opportunity, perhaps, but one too rarely seen. Long after the glitz of the inaugural and the president's first 30 days in office has faded into the mundane, they'll be the show to watch.