Senate Republicans trash an economic stimulus bill that many of them will probably vote for very soon. 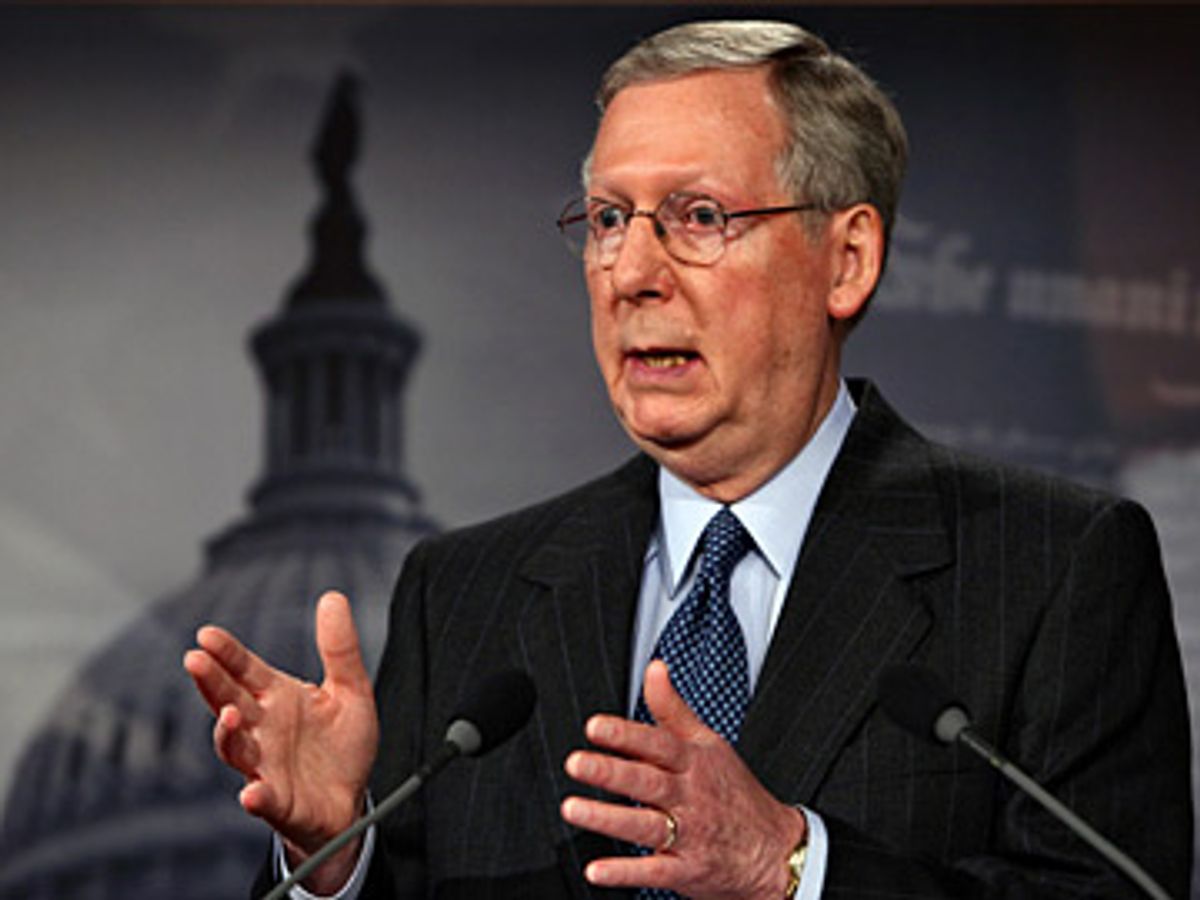 The White House is doing its best to instill a sense of urgency as lawmakers work on the massive economic stimulus bill President Obama requested. The daily press briefings focus on the economy. Obama's schedule is full of meetings with economic advisors and with CEOs and regular folks clamoring for relief from the harsh economic climate. Last week, Vice President Biden even enlisted as the head of a new task force to focus on the middle class.

Senate Republicans are operating on a different timetable. They don't need to be done with the bill till the end of the week, or the early part of next week. They've got a vacation coming up on Friday the 13th -- the President's Day recess, also known as a "district work period," meaning they go back to their home states. Before they leave, they want to engage in a little theater, so that when they get home they can tell Republican voters that they did valiant battle with Barack Obama and the Democrats over the stimulus. And then, if they are among the many GOP senators who hail from blue or purple states, tell the rest of the voters why they ended up voting for the thing anyway.

The Senate is by nature less ideological than the lower chamber, and GOP senators represent broader constituencies than their comrades in the House. Most House Republicans now hail from the kind of bright red, reliably Republican districts where they have more to fear from a GOP primary challenger than from a Democratic opponent in the general election. The rules of the Senate also favor compromise, permitting more input from the opposition party in the writing of bills. Republican senators, therefore, have both a greater expectation that the finished product will be to their liking, and more political motivation to vote for it.

Before they can do that, however, they must raise a great clamor, and figure out some way to declare victory. The House GOP has spent the last several days in an orgy of self-congratulation for their unanimous no vote on the Democratic bill that still passed the chamber easily, even after 11 Democrats peeled off and voted against it. Now Senate Republicans seem to be making similar noises, trying to create the impression of disunion and failure on the Democratic side, no matter how they actually end up voting on the bill. "I hope that [Obama's] going to be able to put the Democratic leaders of the House and Senate in line," Senate GOP boss Mitch McConnell of Kentucky said Monday. "He needs to talk to them. He needs to let them know that the measures that they are moving forward don't meet his own standard." On Sunday, he had hinted on CBS's "Face the Nation" that Republicans might try to block the bill if they don't like it.

On Monday afternoon, Senate Republicans held a "hearing" on Capitol Hill where they asked various experts to testify about why the Obama stimulus won't work. Amity Shlaes, not an economist but the premier public popularizer of the notion that the New Deal (and by extension any massive Keynesian economic stimulus) was a failure, was supposed to be one of the witnesses, but didn't show; Douglas Holtz-Eakin, an economics advisor to John McCain's campaign last year, did show. "No large new spending programs should occur in the stimulus," Holtz-Eakin said, shocking no one. The production was more of a gimmick, and a bow to the GOP's conservative base, than an actual exploration of policy.

Meanwhile, individual senators are finding plenty to complain about in the Democratic bill in the Senate, the same way House Republicans did there. "Almost all Republicans will not vote for this bill the way it is now. And I think the economists and the people who are in the financial world are saying the same thing," Texas Sen. Kay Bailey Hutchison said on CNBC Monday, probably exaggerating the opposition to the spending bill that actually exists, once you get outside the Beltway. "I think we have to throw out the social spending, which is all very good, but not stimulative." Republicans don't love the bill's nearly $900 billion price tag, even though some economists wonder if the legislation actually needs to spend more money to be effective. As the Senate debates, expect to see amendments stripping out some of the projects the bill funds -- money for the National Endowment for the Arts, $1 billion for the 2010 Census, $600 million for the government to buy fuel-efficient cars and other proposals could come under fire.

Chances are, though, that any attempt to stop the bill by filibuster would fall short. Democrats won't have to sway more than one or two Republicans to move ahead with the legislation. Already, Senate Republicans are trying a different and less obstructive strategy than that of their House counterparts. Sure, McConnell is talking tough, but he apparently realizes the "all tax cuts, all the time" angle the House GOP pushed won't fly. Instead of simply demanding lower taxes, now and forever, the Senate Republicans plan to focus on propping up housing prices through the stimulus bill. Sen. Lamar Alexander, R-Tenn., the third-ranking Senate Republican, is pushing for the bill to include a guaranteed 4 or 4.5 percent, 30-year-fixed mortgage for "credit-worthy" homeowners, backed by Freddie Mae and Fannie Mae. That plan might put the country back on a path for another housing bubble, but it probably sounds a lot more attractive to voters -- or, at least, voters with mortgages -- than, say, cutting business taxes. It's already becoming a talking point. "Republicans, I think, will come forward with ideas to start with housing first, let people keep more of their own money, and in that way really provide some stimulus and better hope for the future," Sen. Jon Kyl, of Arizona, the second-ranking Senate Republican, told "Fox News Sunday."

The Senate GOP hasn't yet, and probably won't, draw a line in the sand, the way House Republican leader John Boehner did last week, telling his flock to vote against the bill just hours before Obama went to the Capitol to meet with them about it. Depending on exactly what's in the final product, Senate Republicans could even learn to love the price. "The bottom line is a problem because of the way it's being spent," one GOP aide said. "If the bottom line creates jobs and gets us out of this economic mess and then generates tax revenue, that's one thing. If it's just spending money on a bunch of crap, it's another." What might determine how many Republicans vote for the bill in the end is what the definition of "a bunch of crap" is. The White House has about two weeks to fight that one out.

And about those House Republicans, the ones who are still crowing about last week's shutout: Many of them may wind up flipping too. "I think [the White House] will go to them a bit, they will come to us a bit, and plenty will flip for the final vote," one Democratic aide said about House Republicans, echoing what some in the GOP have been saying privately, as well. "Many are planning to vote yes on the final vote -- this was basically a free vote for them to side with their leadership for the first round and side with constituents for the second round.