Brother, can you spare a bonus? 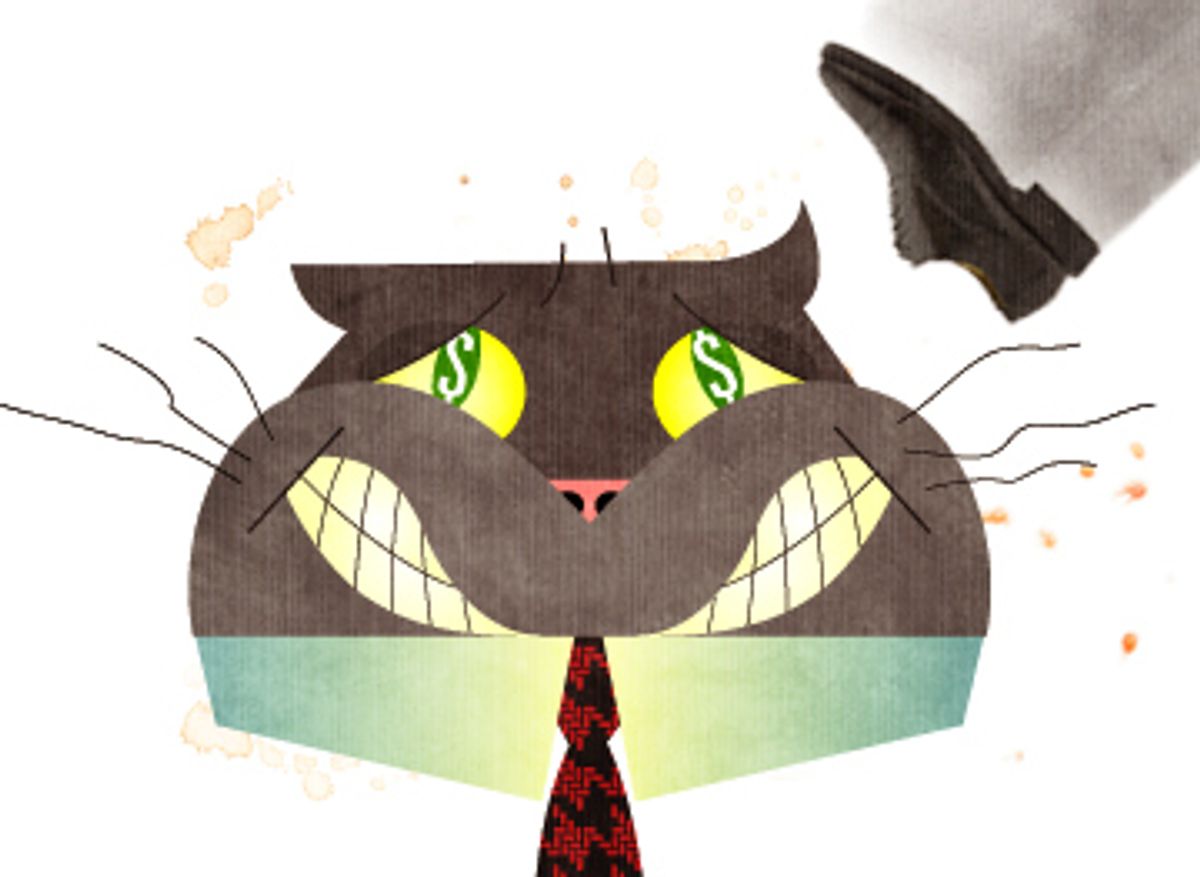 The wizards of high finance must feel that life as they know it is ending. All the gimmicky investment vehicles Wall Street hatched to sell new products over the past few years have crashed and burned, taking the economy along with them. The federal government is gobbling up failing banks faster than the leveraged-buyout cowboys ever did in the bad old days. After a horrific year for the stock markets, bonuses on Wall Street dwindled to a pittance; Citigroup, for instance, paid out a mere $4 billion to reward the employees who worked so hard to help it lose almost $19 billion. And now, on top of all that, some guy who makes only $400,000 a year decided Wednesday that there ought to be limits on how much banks that get bailed out by the feds can pay their top executives?

Yes indeed, the Wall Street life ain't easy these days. Of course, for any bankers freaking out about the new rules that President Barack Obama announced Wednesday, which cap pay at $500,000 for firms that take federal aid to stay in business, there is one easy way to keep rolling in the dough: Don't run your company into the ground so quickly that the only way to survive is to get on the dole. The new rules apply only to firms that take part in future bailouts; without federal aid, there are no strings attached. But administration officials, and Obama, seemed resigned to the fact that the $700 billion already spent to rescue Wall Street won't be the last of it, and that the rules will probably be applied fairly soon. Cracking down on runaway salaries, in fact, seems to be an attempt to smooth the political path for the next round of bailouts.

"We all need to take responsibility," Obama said. "And this includes executives at major financial firms who turned to the American people, hat in hand, when they were in trouble, even as they paid themselves their customary lavish bonuses. As I said last week, that's the height of irresponsibility. That's shameful. And that's exactly the kind of disregard for the costs and consequences of their actions that brought about this crisis: a culture of narrow self-interest and short-term gain at the expense of everything else."

In the future, companies taking federal aid will be split into two groups: the ones that take small chunks of widely available bailout cash, and the ones that are so financially unstable that they need to negotiate special, larger packages just for themselves. That second category would differentiate firms like AIG, Citigroup and Bank of America, which all secured special emergency aid grants from the feds last fall in addition to taking money from the Troubled Assets Relief Program, from the dozens of other banks that have taken bailout money. The $500,000 limit will apply more strictly to the latter type of companies; firms that just take part in regular bailouts will be able to waive the limit if their shareholders vote to do so and if they make their overall compensation strategy public. Companies that take public money will still be able to grant stock options, but their executives won't be able to cash in those options until the government has been paid back for its assistance, or -- if they never manage to pay back the aid -- until Treasury decides the options have been held long enough to persuade managers to pay attention to the long-term health of their firm. The days of making a quick buck and cashing out even when everyone else is losing, in other words, are supposed to be over.

"This is America," Obama said. "We don't disparage wealth. We don't begrudge anybody for achieving success. And we believe that success should be rewarded. But what gets people upset -- and rightfully so -- are executives being rewarded for failure. Especially when those rewards are subsidized by U.S. taxpayers."

The rules don't need approval from Congress, because they'll be part of direct negotiations between the Treasury and any companies that take aid in the future, but since a recent poll found widespread revulsion at the idea of big bonuses for executives of bailed-out companies, no one who depends on the approval of voters to keep their own job is likely to object. There were, of course, hardly any rules imposed as part of the first wave of government bailouts, thanks to the influence of the George W. Bush White House. But those are so unpopular now that Obama and Treasury Secretary Tim Geithner had to get the pay limits out before the administration went back to ask Congress to fund more financial rescues. "Those are unlikely to be the last situations that we, as a country, will face before this financial crisis is resolved," an administration official said of the bailouts. "Those are cases where, as the president says, people are essentially asking for public dollars. And with those public dollars should come greater accountability to the public."

That message didn't go over so well with some high-finance types. "No one goes into Wall Street to save the world," Meredith Whitney, an analyst with Oppenheimer & Co., told Bloomberg Television. "Compensation is the motivating factor." A headhunter for financial workers whined to the New York Times that "$500,000 is not a lot of money, particularly if there is no bonus." Administration officials say the new rules will be enforced by the same Treasury employees who enforce other laws and regulations at banks, many of whom work on the premises of the firms they're overseeing. There aren't any plans to add new compliance officers to make sure the pay limits are being followed, though. For now, since the rules were just put in place, no banks are subject to them yet.

Administration officials, though, said they weren't worried that the limits would keep companies from taking aid if they needed it. It doesn't seem that anyone -- except the Wall Street bankers whose checkbooks (and second mortgages, and private school tuitions, and sports cars) will take a hit -- is particularly concerned about what the new rules might mean within the financial industry. If anything, the administration indicated it would probably try to crack down more on pay when it rolls out longer-term reforms later in the year. The critics may be right; top executives who used to make tens of millions of dollars a year may not want to stay at firms that can pay them only half a million. But if those executives didn't expect their compensation -- which is supposed to be tied, in theory, to their companies' performance -- to drop after the markets tanked last year, and didn't plan their personal budget well enough that they could sock away a few million bucks during the fat years, do you really want them in charge of your 401K, anyway?