Oscar shows us his shorts

From a zany octopus chase to a surveillance-cam love story and a wistful Parisian take on "Crash," this year's Academy-nominated short films hit theaters and iTunes. 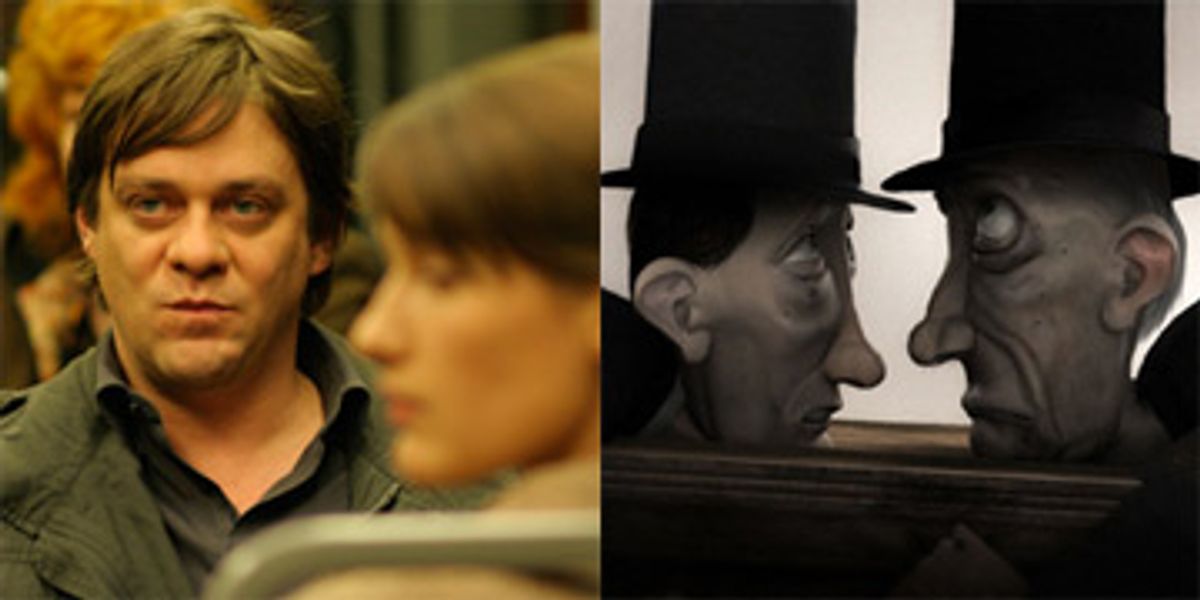 Short films, at least as the category is defined by the Academy Awards, have even less to do with one another than feature films do. I mean, think about it: With very few exceptions, the films nominated for best picture over the years have all been three-act stories with plot, characters and a script, costing multiple millions to make and running somewhere between 80 and 160 minutes. A short, on the other hand, is any motion picture less than 40 minutes in length, and as in previous years, the 2008 nominees in animated and live-action shorts run the visual, conceptual and philosophical gamut. We've got a two-minute chase sequence involving a boy-girl pair of animated octopuses ("Oktapodi"), a bittersweet tale of immigration ("New Boy"), an affected literary conceit ("Manon on the Asphalt") and a couple of moody miniature features that run almost half an hour apiece ("On the Line" and "Pig").

As has become customary, the Oscar shorts are dominated by foreign and especially European entries. Even Japanese animator Kunio Kato's "House of Small Cubes" was made for a French production company, and both its aesthetics and its mood of doleful nostalgia are more redolent of Western Europe than East Asia. At least this year there's one American film among the 10 nominees, and Doug Sweetland's "Presto," a delightful series of slapstick gags made for Disney/Pixar, lives up to that company's standards.

This year I feel especially grateful for a short like "Presto," or Adam Foulkes and Alan Smith's outrageous, black-comic "This Way Up." Pure entertainment seems like a less self-indulgent commodity in dark times (as Noel Coward more or less observed, while writing farces for Londoners to watch while the bombs dropped around them) and the Oscar shorts have become something of a mourn-fest in recent years. It sometimes seems like aspiring filmmakers think they've got to tell stories about losers, loners, sick people and old people in order to establish their moral bona fides.

As usual, Shorts International and Magnolia Pictures will be distributing an Oscar Shorts program of all 10 films in theaters around the country, beginning this weekend on 40 or so screens in major cities. (Beginning Feb. 17, you'll also find it on the iTunes Store.) I've ranked them below in order of personal preference, and also engaged in the inevitable horse-race speculation.

"On the Line" (Switzerland/Germany; directed by Reto Caffi) This gloomy but intense fable about the budding romance between a misfit security guard and the bookstore clerk he's been watching via surveillance camera marks the best entry in a pretty weak list this year. Definitely feels like a longer film in embryo, not least because we're left hanging at the end, with no clear resolution of several major plot points. But the performances by Janic Halioua and Julie Bräuning are terrific, and Caffi captures the borderline desperation of Europe's working poor with a clarity reminiscent of the Dardenne brothers. Too ambiguous and unsettling to win the Oscar.

"Toyland" (Germany; directed by Jochen Alexander Freydank) The obvious choice to take home the award, this Holocaust-era 13-minute drama follows a hysterical German mother as she tries to find her missing boy on the streets of an unnamed city. The twist here is that she's not Jewish, but is concerned that her son may have insisted on leaving town with their neighbors, the Silbersteins, on their train journey to "Toyland." (Yes, a lot of other people with yellow stars sewn on their clothing are going there too, and they're traveling by boxcar.) There's a further twist at the end of this slightly too elegant short-story film, and that's the one that will break your heart.

"Manon on the Asphalt" (France; directed by Elizabeth Marre and Olivier Pont) I'm really on the fence about this one, arguably the most risky and adventurous film on the list, so I'm going to rank it right in the middle. It's something like a miniature, more Parisian and even cuter version of "Crash" -- a young woman is critically injured while riding her bike and lies on the pavement, reflecting on the small moments in her immediate past and on how her friends will deal with her loss. Marre and Pont's filmmaking is superb, but whether you find this meditation on mortality to be heartfelt and affecting or trivial and prepackaged is an individual question. Personally, I felt both reactions at various times (in a 15-minute film). A strong contender to take the prize.

"Pig" (Denmark; directed by Dorte Høgh) Another of the lonely-geezer-in-hospital films that seems like its own genre on a continent troubled by a graying population, but a pretty solid one until it decays into a lecture on political tolerance. Grumpy, elderly Asbjørn (Henning Moritzen) checks into a sterile hospital room for some unpleasant nether-regions surgery that may indicate a lethal battle with cancer, but finds some comfort in a whimsical painting of a diving pig. So begins this shambling 23-minute comedy, which eventually pits Asbjørn and his hard-boiled attorney daughter against the Muslim neighbors, who object to the porcine portrait on cultural grounds. Too Nordic and offbeat, I'd say.

"New Boy" (Ireland; directed by Steph Green) Based on a Roddy Doyle story, this 11-minute film follows a 9-year-old African immigrant on his troubled first day in an Irish school, while filling us in briefly on why he's there. Agreeable and well-acted, but also slight and more than a little patronizing. Never count a film out that's about schoolchildren and Important Life Lessons, when it comes Oscar time.

"This Way Up" (United Kingdom; directed by Adam Foulkes and Alan Smith) This black-comic, computer-animated short made for the BBC was my favorite film in either category, which means it has absolutely no shot at winning. A pair of top-hatted undertakers must get a coffin and its dearly departed contents into hallowed ground, even if that means combating a lethal Rube Goldberg-style chain reaction and enduring their own voyage to the gates of hell and back again. Like all the animated nominees this year, "This Way Up" has no spoken dialogue. A grandiose, absurd vision that channels Beckett, Laurel & Hardy, Max Fleischer, the "Pink Elephants" number from Disney's "Dumbo" and Hieronymus Bosch, "This Way Up" has more of the wonder and pointlessness of human life in it than most full-length films I've seen.

"Presto" (United States; directed by Doug Sweetland) This latest Disney/Pixar short is nothing but a series of increasingly outrageous running gags involving an old-school magician, his magic hat, and the mischievous bunny he plans to extract therefrom. Animation technique aside, it's pretty much a film ol' Walt himself might have produced in 1937, which is exactly what makes it so charming. We've got accidental electrocution, unintentional public display of boxer shorts, a grand piano falling from a great height, a mousetrap snapped on fingers and various other acts of violence great and small, all played for laughs. "Presto" is hands-down going to be the popular favorite here, and on this weak list could cop the big prize.

"Oktapodi" (France; directed by Julien Bocabeille, Francois-Xavier Chanioux, Olivier Delabarre, Thierry Marchand, Quentin Marmier and Emud Mokhberi) It takes longer to type the names of the six co-directors than it does to watch this enjoyable little computer-animated action sniglet, in which a pair of octopuses struggle to escape from a restaurant delivery truck as it careens down the narrow streets of a Greek seafront town. Lots of fun, but too short, too funny and too devoid of message to win anything.

"House of Small Cubes" (Japan; directed by Kunio Kato) Lovely animation in a hand-painted style -- although I believe it's actually digital -- and a muted color palette distinguish this entry, along with an apparent but unspecific sci-fi premise and attendant eco-message. An elderly man lives alone atop a huge tower, which he's had to build ever higher to escape rising flood waters. You know, the glaciers, etc. In search of a lost pipe, he scuba-dives down through each of his former houses, with each one traveling further back into nostalgic contemplation of a life when he wasn't alone (and the world wasn't drowned). It's the mournful, arty, animated remake of "Waterworld"! Impressive, but simply too damn depressing.

"Lavatory Lovestory" (Russia; directed by Konstantin Bronzit) A lonely female attendant in the men's room dreams of romance -- and then someone starts bringing her flowers, the only colors seen in this black-and-white, line-drawn animation. The old-fashioned technique is charming and the wordless story is simple, sweet and whimsical. Many viewers will find that more than enough, but this could have been told more effectively in half its 10-minute running time.

The 2009 Oscar Shorts program opens Feb. 6 in many major cities, with wider national release to follow. Beginning Feb. 17, it will also be available from the iTunes Store (U.S., Canada and U.K. only).