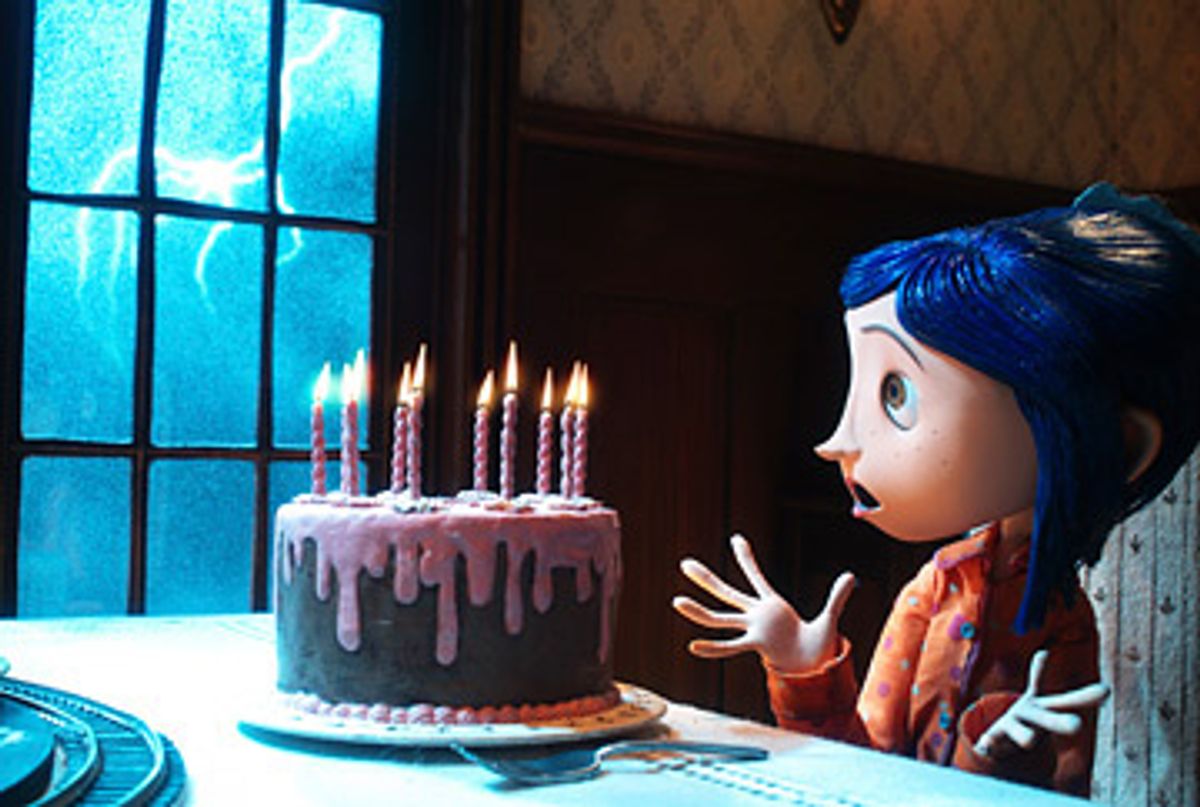 There's often a pall of creepiness hanging over the most memorable children's literature: Wooden puppets yearning to become real boys are instead turned into circus donkeys, liable to be skinned if they can't perform on demand. Spoiled young girls who insist on wearing red shoes to church are doomed to dance until the end of time, even after their feet have been chopped off and replaced with wooden prosthetics. These stories were designed, in part, to scare kids into behaving, but they tend to outlast their obvious motivational purposes. They often stick with us into adulthood, perhaps as a reminder that childhood isn't necessarily a pretty or an easy place, even though we often talk ourselves into remembering it that way.

"Coraline," Neil Gaiman's compact but beautifully textured 2002 children's novel, is a modern-day fairy tale with its share of dark, jagged corners. Its eponymous heroine is a little girl whose parents are often distracted and don't always have time for her. But she discovers an alternative family that, at first, seems to be an improvement -- although this Other Mother and Father do have buttons sewn where their eyes should be, and you can bet that's not a good sign.

Reading "Coraline" as an adult makes you realize you're never too old to want to sleep with a light on. The wonder of Henry Selick's gorgeous stop-motion animation version of Gaiman's novel is that it preserves the book's shivery, unsettling qualities, even as it expands on, and slightly recasts, the original story. "Coraline" is essentially faithful to the spirit of its source material. But it's also so visually inventive, and so elaborately tactile, that it stands apart as its own creation. I don't recommend "Coraline" for very small children, and I'll warn you that it may also make very big children -- Exhibit A: Me -- feel very small. In the picture's opening-credits sequence (set to the most sinister-sounding lullaby music you've ever heard), a floppy, used-up cloth doll has her innards removed and replaced, her button-eyes resewn, and her belly neatly sutured, all by a spidery, disembodied hand.

But Selick -- the director of "Tim Burton's The Nightmare Before Christmas," as well as the charming 1996 Roald Dahl adaptation "James and the Giant Peach" and the raucous grown-up fantasy "Monkeybone" -- knows how to impart a sense of delight and wonder to even the spooky stuff. In "Coraline," the creepiest moments and images are also among the most seductively beautiful. The movie opens with the bored, restless Coraline (voiced by Dakota Fanning) exploring the grounds of the rambling house she's just moved into with her parents: It's an elegantly ramshackle Victorian called the Pink Palace Apartments, and in her early explorations in the yard, she meets a nerdy neighbor kid on a motorbike, Wybie Lovat (Robert Bailey Jr.) -- a newly invented character who does not appear in Gaiman's book -- who seems nice enough even though he's wearing a skeleton mask. Later, Wybie gives her a doll that looks suspiciously like the one we've already met in the credit sequence. And that's where Coraline's adventures, springing from her restless wish that her family life could be "different," begin.

In Coraline's real life, her mother and father are both writers -- their specialty is gardening, even though they don't care much for dirt. Dad (John Hodgman) cooks the family's meals; his specialties are slippery, disgusting-looking concoctions that sit in a heavy mound on the dinner plate. Mom (Teri Hatcher) is in charge of cleaning the house, which is why she won't let Coraline go out in the rain -- she doesn't want to have to wipe up all that mud. And so Coraline, wandering through the house, discovers a secret door and finds, on the other side of it, an "Other" mother and father -- with buttons where their eyes should be -- who are willing to cater to her every whim. The Other Father has planted, just for her, a marvelous moonlight garden, complete with glow-in-the-dark snapdragons that really look and move like dragons, and the Other Mother presents her with elaborate, delicious and picture-perfect meals (although, curiously, she eats nothing herself). Coraline, at first delighted by this alternative home universe, begins thinking it might be time to trade up in the family department. Maybe she could even learn to overlook the button thing.

There's a catch, of course, and before Coraline can choose the family she wants to live with, her Other Mother makes the choice for her. Selick -- who also wrote the screenplay -- has intensified some of Gaiman's original themes, in addition to introducing a few overtly Freudian elements. This "Coraline" suggests some of the ways parents try to hold onto us, to keep us from growing up and therefore leaving them forever. It also flirts with the insidious rivalries that can crop up between mothers and daughters. (When Coraline learns that her Other Mother's intentions aren't entirely selfless, she says in astonishment, "Mothers don't eat daughters!" But sometimes, at least in fairy tales and in parts of Southern California, they may wish they could, as a way of preserving their own youth and beauty.)

There's so much going on in "Coraline" -- both visually and in terms of its elaborate story -- that the experience of watching it can be a little overwhelming. Selick and his team clearly came up with so many enticing visual and narrative angles, they couldn't bear to edit them down, and the picture might have benefited from some streamlining. But "Coraline" has been made with so much care, and with so much attention to detail, that maybe it's just as well there's more of it rather than less. The supporting characters in the story -- including the Russian mouse trainer Mr. Bobinksy (Ian McShane), the former vaudeville performers known as Miss Spink and Miss Forcible (with voices supplied by the English comedy duo Jennifer Saunders and Dawn French) and the character known simply as Cat (Keith David), an elegant black creature with mischievous-looking eyes -- are all beautifully designed. But it's the thousand-and-one details around all these characters that give the movie its glorious and varied textures. Mr. Bobinsky's performing mice are hoppity fellows with extraordinarily long tails, who scamper and dance and play (as Gaiman described in his book) musical instruments with their tiny mouse fingers. One sequence features a performance hall filled with fidgety, pointy-bearded scottie dogs. There are 248 of them, to be exact, and according to the movie's press notes, none of these extras was computer-generated. That means every single pup you see on the screen is an actual, movable puppet figure, although many of the "background" dogs were operated via a mechanical system.

I have to say it sounds a little obsessive. On the other hand, we live in a world flooded with cheap, shoddily made goods: Almost nothing is made to last anymore; everything is mass-produced and designed to be replaced. So even if "Coraline" suggests that the many, many people who worked on it are at least slightly mad, it is also, clearly, a labor of love. Nearly everything in "Coraline" -- from the puppet characters themselves, to their small sweaters and shoes (the latter of which were, in some cases, cut from antique Victorian kid gloves), to the numerous miniature props (which include a toy chest full of weird, wriggly toys with button eyes) -- has been painstakingly handmade, and although the film was shot with digital cameras, the images have not been computer-enhanced. The picture is being shown in select theaters in 3-D, and while I'm generally not much of a fan of the 3-D experience, the technology lends itself beautifully to the tactile nature of stop-motion animation: At one point I really did believe I could reach out and grab the long, waving tails of those performing mice. The devil, they say, is in the details, and "Coraline" brings them close enough to touch.