Come on, people, all he did was smoke some weed, like Bill Gates, Barack Obama and countless other overachievers. 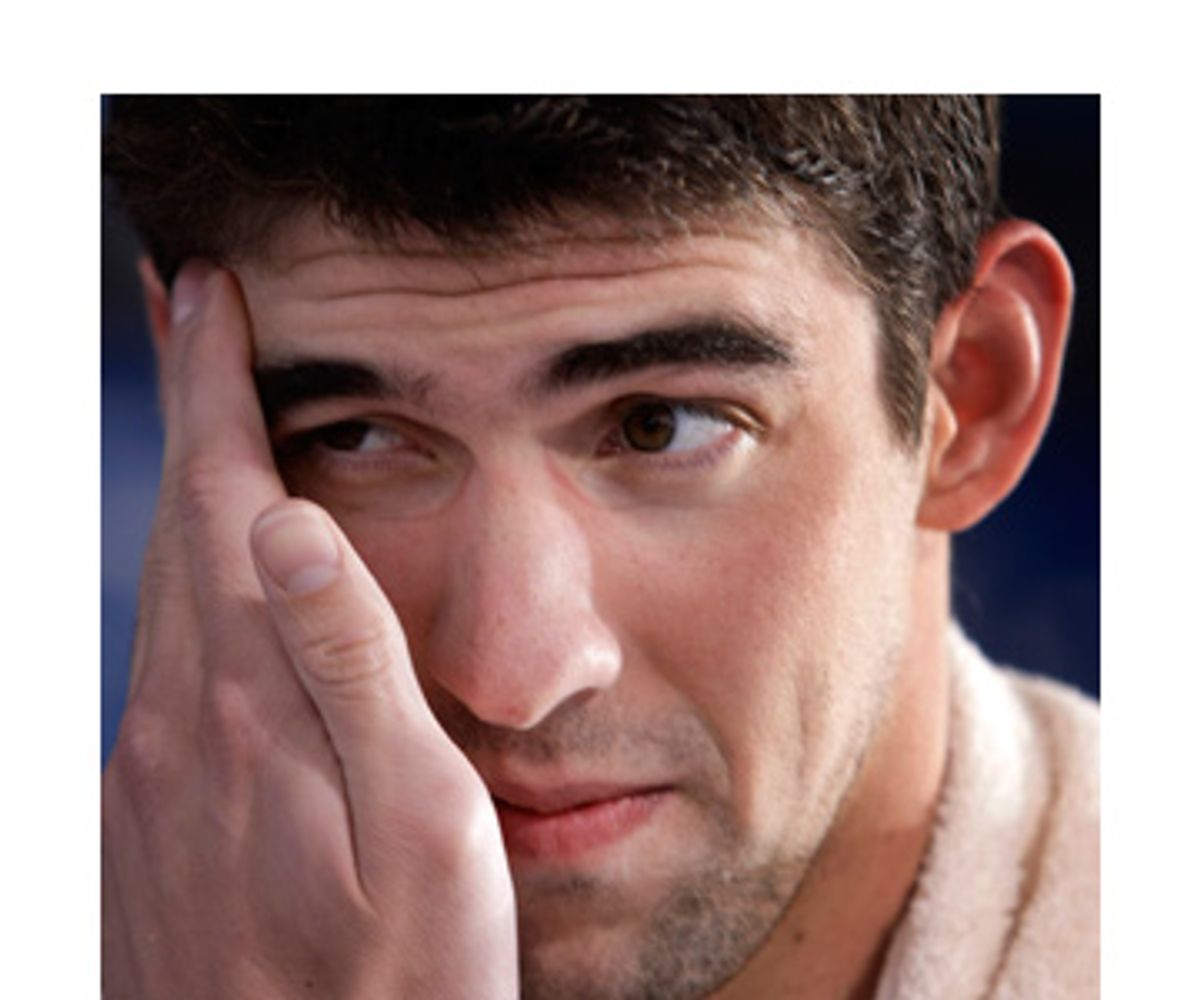 The brutal exposure and possible arrest of alleged pothead Michael Phelps, probably the best athlete on earth, demands fresh attention to old questions: Why is marijuana still illegal in the United States? And why do we prosecute people for using the herb?

As the world now knows, poor Phelps was chilling with a few friends and a glass bong when caught on camera -- which would have been no problem had London's News of the World tabloid not published the photo, described as follows in the accompanying news story: "This is the astonishing picture which could destroy the career of the greatest competitor in Olympic history."

Although Phelps soon confessed that the picture was real, that caption was as sensationally misleading as much of what appears as news in the Murdoch press. Phelps has lost a major endorsement contract with Kellogg and has been suspended from competition for three months. But certainly there was nothing "astonishing" or even mildly surprising about the fact that a superb swimmer, or a top competitor in any form of sport, might puff on a blunt from time to time. By now there have simply been too many other cases of exceptional athletes, ranging from test cricketers to snowboard champions, who have admitted to smoking dope for recreation or relief.

Within the past several months, in fact, four ranking sumo wrestlers have been busted and booted out of the sport, including one who was arrested in Tokyo last Friday. No doubt the Japanese wrestling authorities meant to humiliate the sumo stars, using shame to maintain the forbidden aura around the drug, just as we do (which proves that there is at least one other advanced industrial nation as hypocritical on this issue as we are).

But more than a few of the athletes who have identified themselves as cannabis users in past years have done so without the shame that Phelps claimed to feel when he offered his endorsement-saving mea culpa. Some insist that using marijuana eased physical pain or even improved their game. Former Dallas Cowboys lineman Mark Stepnoski, who played on two Super Bowl-winning teams and is now an active proponent of legalization, said he smoked pot throughout his career without impairing his game.

And Stepnoski is not alone in American professional sports, where marijuana use is common. More than a decade ago, the New York Times reported that nearly three out of four NBA players had smoked. Not much has changed since then, according to Dallas Mavericks forward Josh Howard, who told an ESPN radio host last year that not only did he use marijuana in the off season, but so did "most of the players in the league."

None of this rampant toking seems to have impaired athletic performance -- unless we assume that Phelps, for instance, would somehow have won more than eight gold medals at last summer's Olympic Games. So much for the argument that marijuana damages motivation, or prowess, or leads inevitably to more dangerous narcotics.

Of course, it isn't only athletic stars who have been known to indulge in reefer madness. Important scientists such as Richard Feynman, Stephen Jay Gould, Margaret Mead, and Carl Sagan, billionaire executives like Sir Richard Branson and Bill Gates, and a great many of the literary and musical geniuses of the past century or so -- William Butler Yeats, Duke Ellington, Louis Armstrong and Bob Dylan among them -- got high. So have many of our top elected officials, notably including Arnold Schwarzenegger, the current governor of California, a highly successful actor and businessman whose pot habit was immortalized on film in "Pumping Iron"; Michael Bloomberg, the current mayor of New York City, another hard-driving billionaire who once told a magazine interviewer that he had not only smoked dope but "enjoyed" it; Newt Gingrich, the former speaker of the House; and Al Gore, former vice president, Google director, and winner of both the Oscar and the Nobel Peace Prize.

What should be the most devastating blow to the foundations of marijuana prohibition was struck just two weeks ago, when Barack Obama, yet another confessed former pothead, ascended to the presidency. Obama has never tried to conceal that he smoked quite a bit of marijuana in his youth (and seems to be considerably more ashamed of his continuing abuse of tobacco). Last year, he joked with New Yorker editor David Remnick about the references to drug use in his memoir, "Dreams From My Father." "Oh, look, you know, when I was a kid, I inhaled. Frequently. That was the point." It was the kind of activity, he said, that can be attributed to the "confusion" of a teenage boy. He made no further apology -- and nobody seemed to care.

So why do we still need to feign outrage over Michael Phelps? Why must he humble himself before the cameras as if he had tortured a puppy? Why should the law treat cannabis as a damaging addiction, when in fact nearly anyone who has accomplished anything worthwhile seems to have taken at least a toke or two? Those are among the mysteries of modern prohibition, which is unlikely to end anytime soon. For now, however, the president who once smoked pot (in fact, many more times than once) ought to fulfill his campaign promise to end the cruel federal raids on medical marijuana clubs. Surely he knows better, and so do the rest of us.