Polls show that Israel is likely to elect a right-wing government with an uber-nationalist component. What implications should that have for U.S. policy?

Israel is holding its national elections tomorrow. Not only is it virtually certain that the right-wing militarist Benjamin Netanyahu of the Likud Party will become the new Prime Minister, but it is highly likely that the ultra-right, anti-Arab nationalist and West Bank settler Avigdor Lieberman of the racist Yisrael Beitenu (Israel Our Home) Party will perform scandalously well.  Polls show Lieberman’s party winning between 15 to 20 of the 120 seats in the Knesset, perhaps even surpassing Israel’s Labour Party for third place and even an outside change for second place.  Lieberman’s party will form a vital component of Netanyahu’s ruling coalition and will secure a key Cabinet post for Lieberman himself.

So extreme and repugnant is Lieberman that even Marty Peretz’s New Republic this week called his party "an extremist right-wing party" and said that Lieberman "has focused much of his campaign inciting public anger against Israel's Arab minority."  In that article -- headlined:  "The alarming rise of radical nationalism in Israel" -- former IDF soldier Arik Ben-Zvi described just some of the disgraceful lowlights:

Under the catchy slogan "No citizenship without loyalty" (it rhymes in Hebrew), Yisrael Beiteinu is pushing for a new law requiring all citizens to swear an "oath of loyalty" to the state. Israeli-Arab citizens or others who refuse could have their citizenship stripped from them. . . .

He accuses Israeli-Arab lawmakers of harboring Hamas sympathies, and has called for the parties to be banned from running in the election. His campaign ads show Israeli-Arab students demonstrating against the Gaza war as a narrator ominously intones, "We won't forget that, during the Gaza conflict, there were those among us who stood with Hamas." As for the Gaza operation itself, Lieberman has denounced the cease-fire as a sell-out of the military. His preferred strategy is total war against the Gazan population: "We must continue to fight Hamas just like the United States did with the Japanese in World War II." The message is clearly finding its audience. Of particular concern is evidence suggesting Lieberman's appeal is growing among young voters.

In February, 2000, Austria held a national election in which the far-right, anti-immigrant party of Joerg Haider stunned the world by attracting 26% of the vote and becoming a part of the ruling parliamentary coalition headed by the Austrian People's Party (though Haider himself had no position in the government).  This is how the United States reacted to those results:

The United States is temporarily recalling its ambassador from Vienna following the swearing in of a new coalition government that includes the far-right Freedom Party. . . .

Speaking at a news conference in Washington, Mrs Albright said: "We have decided to limit our contacts with the new government and we will see whether further actions are necessary to advance our support for democratic values."

The U.S. wasn’t the only country to punish Austria for this outcome:

Israel has recalled its ambassador and has announced that Joerg Haider, the party's figurehead, will not be allowed into the country.

"Israel cannot remain silent in the face of the rise of extremist right-wing parties, in particular in those countries which played a role in the events which brought about the eradication of a third of the Jewish people in the Holocaust," a foreign ministry statement said.

The Haider/Lieberman comparison isn’t perfect. Haider had made a handful of stray reprehensible comments which were anti-Semitic or even sympathetic to former Nazi Party members, but the platform on which he actually ran had nothing to do with that.  It was the standard nativist, anti-immigrant cant sweeping much of the European Right at the time.  Arguably, though, Lieberman’s Arab-hating bile is even worse.  Whereas Haider, an Austrian citizen, was demonizing foreign immigrants seeking to enter the country, Lieberman himself is an immigrant to Israel and is demonizing citizens who have been Israelis far longer than he has.

The U.S. already pays a very substantial price for its decades-long, blind and one-sided support for Israeli actions.  The New York Times yesterday published an Op-Ed from Alaa Al Aswany -- an obviously pro-Obama, pro-American Egyptian describing the pervasive anger in Egypt that has already arisen towards Obama as a result of his deafening silence on the Israeli attack on Gaza. 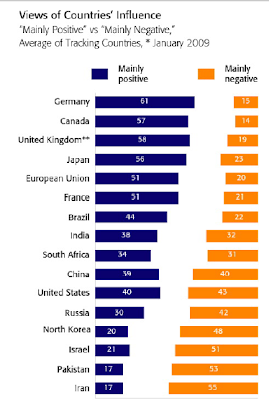 A new BBC poll of worldwide opinion (.pdf), conducted by the Program on International Policy Attitudes (PIPA), surveyed 21 countries from six continents and asked whether the influence exerted by various nations in the world was positive or negative.  The three countries most viewed as having a negative influence in the world -- essentially tied with one another -- were Iran, Pakistan and Israel, all of whom finished just behind North Korea -- and this poll was conducted before Israel’s attack on Gaza. Even before the war on Gaza, Israel was viewed overwhelmingly negatively in every country except two -- the U.S., where citizens view Israel favorably by a not very large 13-point margin (47-34%), and Russia, where public opinion is split.  In every other country, the view of Israel's influence on the world is significantly negative -- in most cases, overwhelmingly so.

U.S. support for Israel has been particularly costly over the last several years, as Israel bombed Lebanon and demolished chunks of Gaza (using American weapons to do so), and continued its policy of settlement expansion in the West Bank – all with various means of American support playing a critical role.  Yet now Israel appears poised to install as Prime Minister someone whose criticisms have been that Israel hasn’t gone far enough and who vows even more severe aggression.  Worse still, the Israeli Government is likely to have as a prominent component a political party that is blatantly racist, anti-democratic and bloodthirsty.

If, as it appears, the face Israel is now choosing for itself is that of Benjamin Netanyahu and Avigdor Lieberman, then the cost to the United States of ongoing, one-sided support for Israel is going to skyrocket, and the need for serious change in U.S. policy towards Israel will be even more acute.  It's worth recalling that Barack Obama, when still seeking the Democratic nomination in February, 2008, said:

I think there is a strain within the pro-Israel community that says unless you adopt an unwavering pro-Likud approach to Israel, then you're anti-Israel, and that can't be the measure of our friendship with Israel.

It will be vital to ensure that Obama actually meant that.  Netanyahu’s pledge to allow the still-further expansion of West Bank settlements makes an already-distant two-state solution less viable still, and his explicit vow to keep the Golan Heights "forever" makes negotiations with Syria doomed from the start.   He actually just objected that Israel's destruction of huge parts of Gaza "did not go far enough."  As The Washington Post's Jackson Diehl put it this morning:

The past four Israeli elections have been won by a candidate who promised to end Israel's conflict with the Palestinians. Tomorrow, for the first time in decades, Israelis may choose a prime minister who is promising to wage war. . . .

[Netanyahu] advocates putting Israeli-Palestinian peace talks on hold indefinitely and says he will not stop the expansion of Jewish settlements. He has never endorsed the creation of a sovereign Palestinian state . . . .

In short, just at the moment that a new U.S. administration launches a policy aimed at addressing the multiple conflicts of the Middle East with intensive diplomacy, it may find itself with an Israeli partner that rejects negotiations with its neighbors and does its best to push the United States toward military confrontation with Iran and its proxies.

But it is Israel’s apparent tolerance for a plainly racist, anti-democratic, warmongering ultra-nationalistic party -- parked smack in the middle of its ruling government -- that would have an even larger impact than Netanyahu’s election.

The strongest argument for the U.S.-Israel alliance has always been Israel’s largely democratic character – its robust free speech and press rights, its political debates that are typically more open and vibrant than those in the U.S., and most of all, its tolerance of religious diversity and the remarkable (though imperfect) assimilation of its Arab citizens into its political, economic and cultural life.  Whatever legitimate objections in those areas critics of Israel have had, they paled when compared to the repressive and dissent-intolerant governments that ruled virtually every other country in that region.

Israel’s pluralism and democratic processes won’t come to a grinding halt because Avigdor Lieberman occupies a key cabinet post (just as Austria's didn't when Haider's Freedom Party joined the ruling coalition).  But the statement Israel is making to the world about what it wants to be and how it perceives itself will be unmistakably clear. This is a country that has waged two brutal wars against largely defenseless neighbors in the past three years, that just banned certain Arab political parties from existing (a ban reversed by its Supreme Court), and that continues expansions on land that does not belong to it despite those expansions being universally condemned and declared illegal in numerous international tribunals.  And now, it is turning to political leaders who believe that these measures have been insufficiently aggressive and who vow far more aggression and, in the case of Lieberman, even more internal repression of its own ethnic and religious minorities.

Israel, like all countries, has the right to choose what leaders it wants.   But as is also always true, other countries have the right -- and, in the case of the U.S. as the enabler of virtually everything Israel does, the responsibility -- to react appropriately.  It's bad enough that we have tied ourselves so blindly and inextricably to Israel as it has existed over the past several years.  But an Israel led by Benjamin Netanyahu and Avigdor Lieberman produces whole new responsibilities for the U.S. not to continue on this path of uncritical support for a government like that.