The former Thighmaster dishes on hormone therapy, and doctors are pissed. 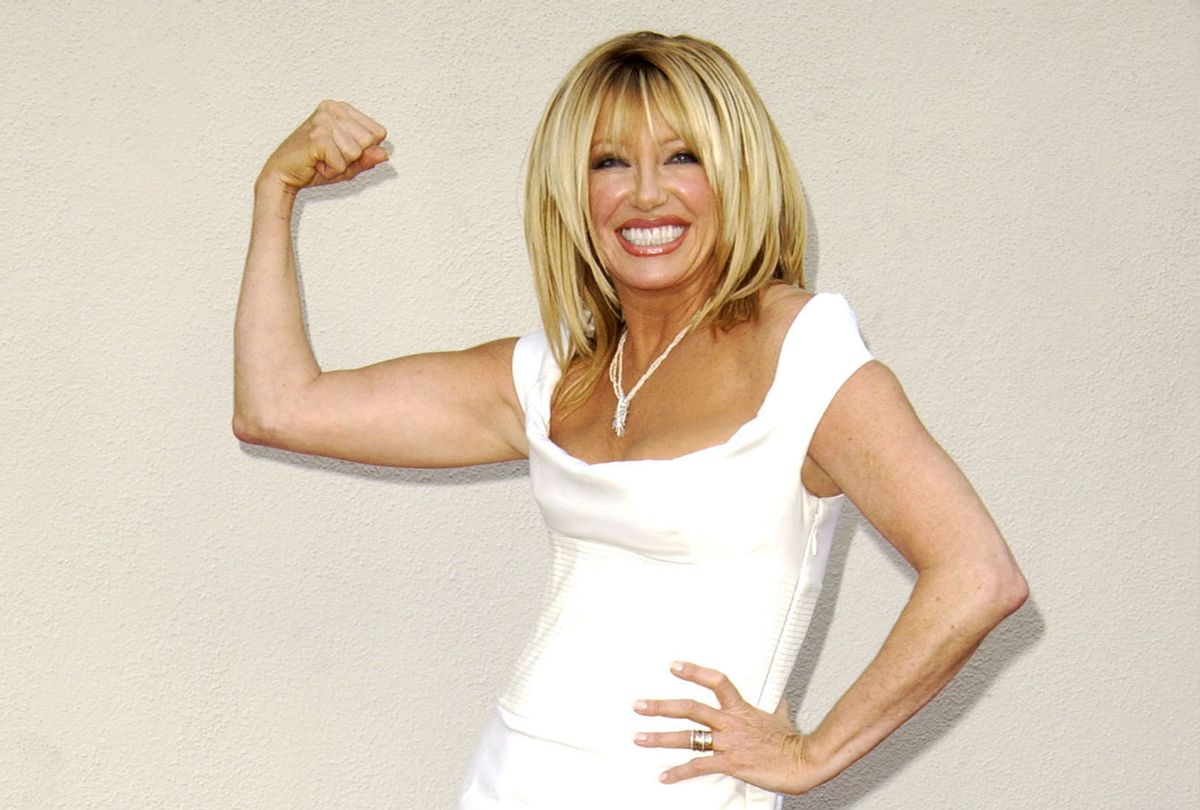 Suzanne Somers during Suzanne Somers Honored with a Star on the Hollywood Walk of Fame for Her Achievements in Television at Hollywood Boulevard in Hollywood, California, United States on January 24, 2003. (Getty Images/SGranitz/WireImage)
--

There are many experts one might want to feature when educating an audience of millions of women about hormone replacement therapy -- for example, a board-certified gynecologist or an endocrinologist. But when Oprah Winfrey recently filmed a show on the topic, her onstage guest was none other than Suzanne Somers. Yes, she of Thighmaster, "Three's Company," "Step by Step" and Home Shopping Network fame. Now, according to a Newsweek article cheekily titled "Uh O!," many experts -- like the kind who, you know, go to medical school and are, like, qualified to talk about this stuff? -- are outraged that the influential talk show host has shone the HRT spotlight on someone who isn't a doctor and hasn't even played one on TV.

In addition to pimping exercise machines, beauty products, food, kitchenware, jewelry, clothing and, um, nanotechnology patches on her Web site, Somers has penned a number of books on the topic of bioidentical hormones, which are chemically identical to the hormones naturally produced in a woman's body. There are low-dose FDA-approved hormones of this type, but Somers stands by her regimen of unregulated hormones, which she purchases from a compounding pharmacy; she also takes "much higher doses and for much longer time periods than most experts recommend," reports Newsweek. She swears it's a safe alternative to conventional HRT and provides "the secret to fabulous sex, great health, and vitality" for menopausal women. Her books have garnered severe criticism in the past, but Somers hasn't let that stop her -- nor did it prevent Oprah, a recent bioidentical convert, from recommending that "every woman" read Somers' books.

Although it's truly worth reading the Newsweek article in its entirety, the experts' major concerns with the Jan. 29 episode can be easily summarized: It understated the risks of hormone therapy ("the bulk of scientific research on the subject suggests that prolonged use of these hormones is associated with an increased risk of serious health conditions including cancer and heart disease"), set it up as "a false fountain of youth," pushed "a one-treatment-fits-all philosophy," blamed all midlife problems on menopause and failed to differentiate between FDA-approved and unregulated bioidentical hormones.

That's not to mention that Oprah didn't ask Somers "about her own history of breast cancer -- Somers was diagnosed with the disease after she started taking her estrogen supplements -- or more recent precancerous changes in Somers' uterus that led to her hysterectomy." Also left untouched was Somers' "decision to continue hormone supplementation after the cancer diagnoses or her latest cancer-fighting theory: that older women should 'restore' their hormones to the levels they had in their 30s and start having periods again, because then they'd be more like younger women who get less cancer," Newsweek reports. "That upside-down logic puts Somers at odds with just about every oncologist in the country."

There were some actual medical experts on the show, although they were placed in the audience to answer targeted questions; Somers was the real star. She was shown in video clips "smearing her arms with hormone cream, standing on her head and lining up the 40 dietary supplements she takes with her morning smoothie," as Newsweek puts it. Dr. Lauren Streicheran, an assistant professor of obstetrics and gynecology at Northwestern University and one of the experts invited on the show, tried to best prepare for this circus by reading Somers' best-selling books on the topic. Working her way through the first chapter of one of the books, she began underlining inaccuracies and found that she had to stop reading because she was "underlining almost everything."

That quote left me wanting more, so I gave Streicheran a ring to talk about her experience on the show. She told me: "One of the issues that I [voiced], which was actually cut from the show, was that many of these so-called experts are not experts, and many of the experts Somers quotes are not board certified and are not even gynecologists." She added: "One of the things I've taken away from this experience is that there are a lot of women out there who need help and we need to make sure they get it. But they need to get accurate information as opposed to the information they want to hear."

Oprah is so good at telling women what they want to hear, though! How wonderful to think that all menopausal women can easily be as perky, energetic, thin, youthful and sexually satisfied as Suzanne Somers. When selling women their shiny new lives -- whether in the form of a new diet or hormone replacement therapy -- you don't dwell on the serious risks or lack of long-term studies, silly!