In his first press conference, the president dismisses his opponents on the stimulus package as out of touch. 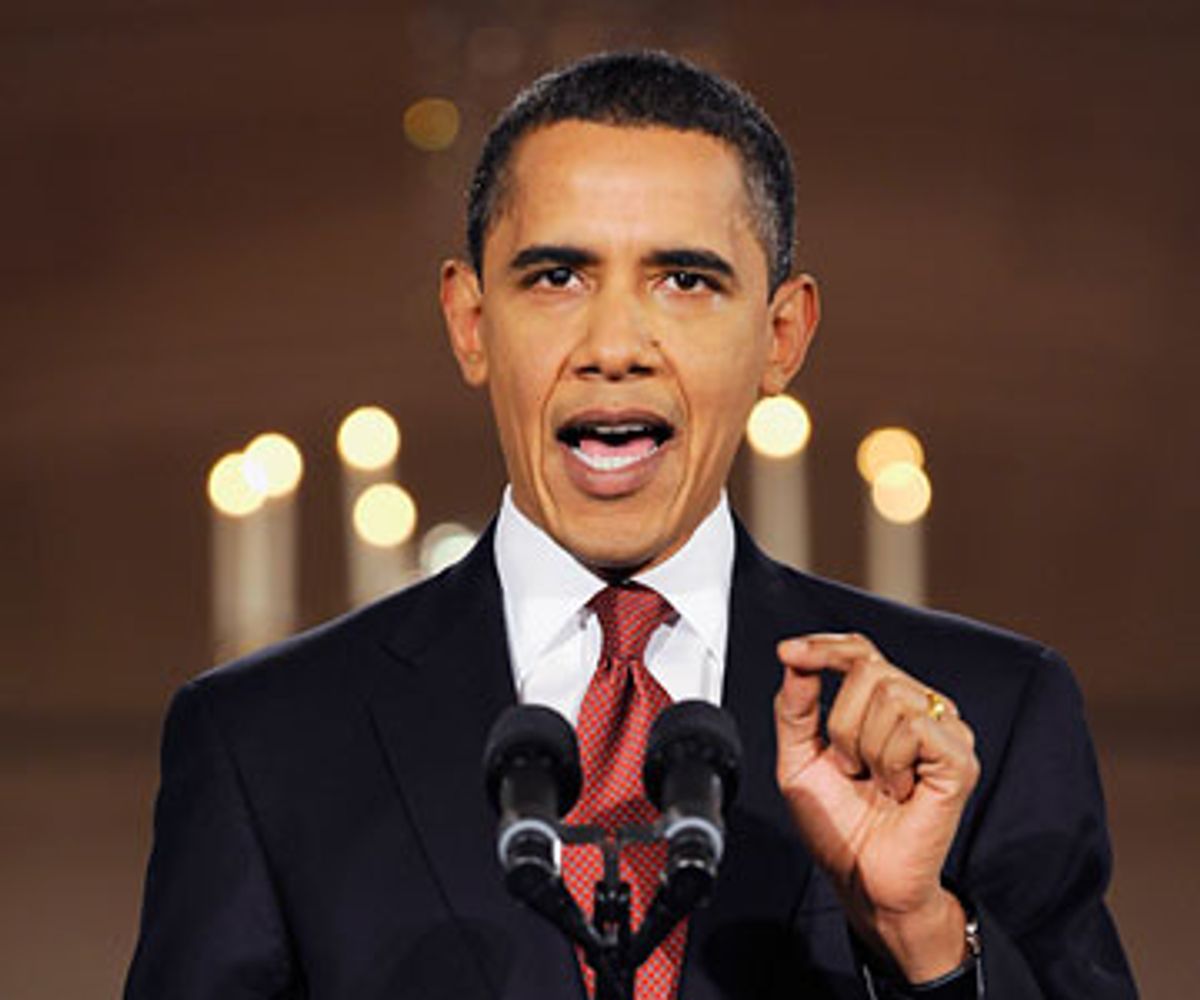 Maybe there wasn't as much song and dance as there had been during the Grammys the night before, but for a reality program focused on public affairs, dire financial matters (and a little bit of baseball), "The Barack Obama Show" didn't do so badly in its prime-time TV debut Monday night.

The White House news conference, the first since Inauguration Day, put a calm, confident President Obama in front of the nation for an hour; while he didn't make any news, he easily drove home a twofold message to anyone watching -- he didn't cause the mess we're in, but he intends to solve it. The evening gave him his best chance yet to make the case for an $800 billion stimulus plan and cut through the cloud of spin and debate that Congress has thrown up during the last couple of weeks. Obama tried to push his opponents out of the political mainstream without directly attacking them, and he underscored the urgency of action while floating above the increasingly nasty fray over the stimulus legislation.

"My bottom line is to make sure that we are saving or creating 4 million jobs, we are making sure that the financial system is working again, that homeowners are getting some relief," Obama said. "And I'm happy to get good ideas from across the political spectrum, from Democrats and Republicans. What I won't do is return to the failed theories of the last eight years that got us into this fix in the first place, because those theories have been tested, and they have failed. And that's what part of the election in November was all about."

By the time Obama took the podium in the East Room, of course, he already knew that the Senate had voted -- by a narrow margin -- to end debate on the stimulus bill, a crucial procedural hurdle that most likely clears the way for passage Tuesday. But the House and the Senate still have to reconcile two different versions of the legislation, and the White House will probably have to stay closely engaged to steer it into law. The GOP has all but abandoned the bill, even though Republican leaders have, since debate began, joined Obama for meetings, drinks, lunch and a Super Bowl party. A total of three Republicans -- out of the 219 in the House and Senate combined -- voted to pass the stimulus legislation.

So on Monday night, the president dismissed opponents as either hopelessly out of touch with the scale of the economic crisis or -- worse -- as responsible for it. "What I've been concerned about is some of the language that's been used suggesting that this is full of pork and this is wasteful government spending, so on and so forth," he said. "When I hear that from folks who presided over a doubling of the national debt, then, you know, I just want them to not engage in some revisionist history. I inherited the deficit that we have right now and the economic crisis that we have right now." And he smoothly elided most of the debate on Capitol Hill -- the fight over whether this or that project is or isn't stimulative, the bickering over the exact price tag of a bill that would still be staggeringly expensive even if Senate Republicans had their way and cut it in half. "When I hear people just saying, 'Ah, we don't need to do anything,' 'This is a spending bill, not a stimulus bill,' without acknowledging that, by definition, part of any stimulus package would include spending -- that's the point -- then what I get a sense of is that there's some ideological blockage there that needs to be cleared up," he said. Obama seemed perfectly at ease, joking occasionally, referring back to previous questions and questioners.

By prime time, Obama had already warmed up his act a bit, taking the stimulus sales pitch on the road to Elkhart, Ind., where he campaigned twice last year. Maybe it was that familiarity -- the deep-down memory that if you're in Elkhart, you're at a campaign event -- that brought back some of the spirit that animated Obama the candidate; this was the first time that Obama the president has reminded Congress how much political muscle he's been hiding under all that bipartisanship talk. "We can't afford to wait," he said. "We can't wait and see and hope for the best. We can't posture and bicker and resort to the same failed ideas that got us into this mess in the first place. That was what this election was all about: The American people rejected those ideas because they hadn't worked."

Instead, in Obama's version, the stimulus plan -- which he never referred to that way, only as a "recovery plan" -- was about putting money in your pocket. And he came equipped with numbers: A $100 a month increase in unemployment compensation, job training for 51,000 Indiana workers, $1,000 tax breaks for working families, $2,500-per-student tax breaks for 76,000 "Hoosier families" to send their kids to college. It was enough to make anyone listening forget all about the honeybee insurance or STD prevention funds that conservatives have harped on incessantly for weeks, even though those vaguely porky projects amount to a tiny fraction of the bill's $800 billion-plus price tag.

The press conference wasn't quite as groundbreaking as the town hall meeting, where aides said Obama would call on anyone with their hands raised; at the White House, the president was clearly working from a seating chart, calling on certain reporters and ignoring increasingly frantic shouts of "Mr. President!" from some others who apparently didn't realize there was a list they weren't on. (Including Salon, though the Huffington Post did get recognized, in a first for new media coverage of the White House.) Even the off-topic questions were reminiscent of the previous administration; a question from the Washington Post about baseball's Alex Rodriguez would have been right in George W. Bush's wheelhouse. Obama did break from Bush in one way -- he practically threw Vice President Joe Biden under a bus for appearing to say the administration had a "30 percent chance" of not finding the solution to the economic crisis. (Bush, of course, barely seemed to notice when Dick Cheney shot a friend in the face.)

Otherwise, though, the news conference was mostly free of news, which was probably by design. The Senate had already provided Obama with the headline he'd been asking them to give him for days, with the key procedural vote on the stimulus bill. Every Democrat voted to move forward with the bill; as expected, only three Republicans -- Maine's Susan Collins and Olympia Snowe and Pennsylvania's Arlen Specter -- joined them. That prompted a certain amount of whining from the rest of the GOP that a bill supported by only three Republicans couldn't possibly count as bipartisan. "The senators that you referred to have frequently voted a little bit differently from the rest of my members," Minority Leader Mitch McConnell of Kentucky said Monday afternoon at a news conference designed to "pre-but" Obama's.

But as the White House finally realized last week, even if it was only after a few days of hounding from cable news pundits over the stimulus bill, the president of the United States has a pretty big megaphone, and pre-butting him -- or rebutting him -- isn't all that effective. McConnell wasn't able to do much more about Obama's roadblocked TV coverage than he was about the stimulus bill rolling along toward passage. Obama stepped up to the bully pulpit Monday night. And from the looks of it, he liked it there.