Love in Brooklyn; death in Naples 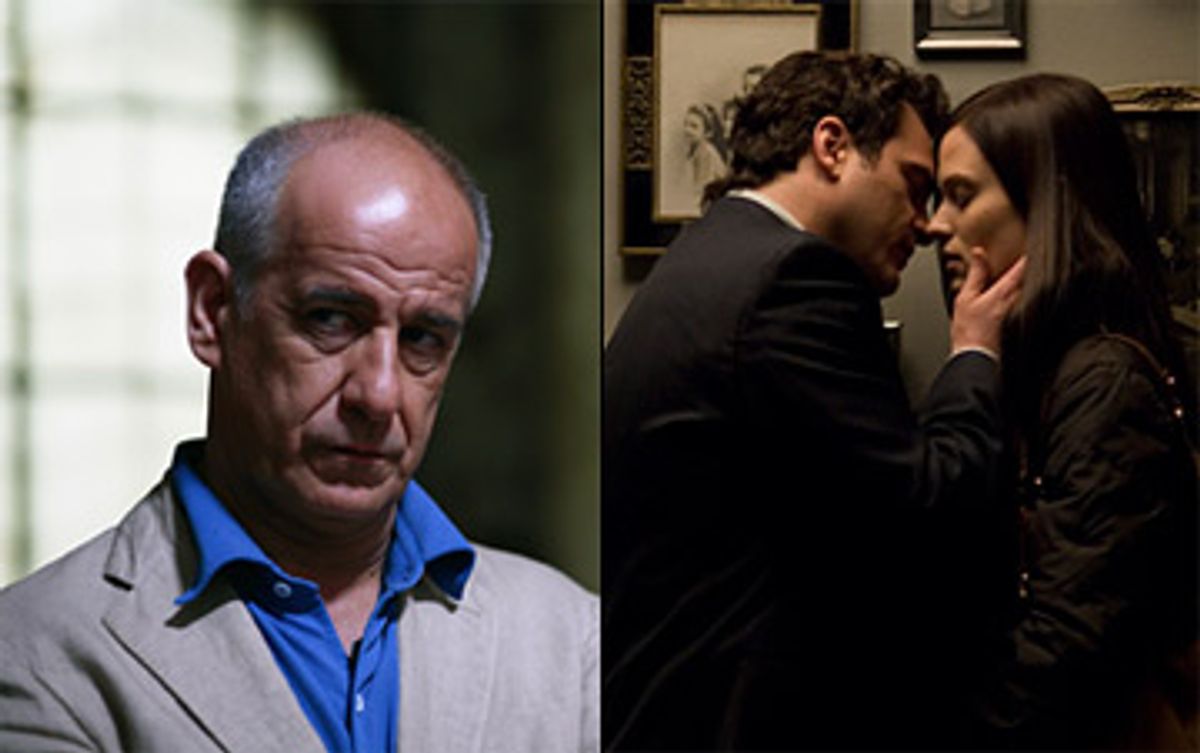 This week brings us two of the most interesting films we're likely to see in 2009, and at first glance they couldn't be more different. James Gray's "Two Lovers" is an intimate and evidently personal film about a romantic triangle, and Matteo Garrone's "Gomorrah" is an operatic film about organized crime, an ambitious work of social, physical and spiritual geography. Both premiered at Cannes last year, where I first covered them. My interview with Gray is here, and my first-impression review of "Gomorrah" is here.

If "Two Lovers" strives to erase the boundaries between us and its characters, "Gomorrah" offers more ironic distance from its large cast of rotating central figures, nearly all of them debased or destroyed by the enormous and evil machine that encases them. Yet both films have their roots in classic Italian cinema, and both are fables (to use Gray's description) about human beings struggling against their destiny without much success.

Beneath a veneer of realism -- more pronounced in "Gomorrah," which presents itself as a pseudo-journalistic study of organized crime in Naples -- both movies also have an allegorical dimension, as if they are telling us that the part of the story we can't see, as with an iceberg, is much larger. Gray's film is about an emotionally paralyzed man and Garrone's is about a criminally poisoned society, but both ailments boil down to the same philosophical dilemma: We claim to be free, but how much of that freedom is convenient self-delusion?

On one level, "Two Lovers" represents a major departure for Gray, a perplexing figure poised between Hollywood and indie film and much debated by critics and cinephiles. You might describe Gray's career as a long and lonely campaign to revive the tradition of old-fashioned storytelling in American cinema. His previous features, beginning with "Little Odessa" in 1994 and continuing with "The Yards" and "We Own the Night," have all been crime films. This isn't because Gray is especially interested in cops and robbers in the real world, he has said, but because crime dramas possess the same archetypal power for contemporary audiences that Shakespeare's monarchy plays had in the 17th century.

Gray's fascination with life in outer-borough New York continues here -- he was born and raised in Queens -- as does his masculine-muse connection with Joaquin Phoenix, the latter-day Brando who has played versions of the same tormented character in three of his films. This time Phoenix portrays a tangibly depressed Brooklynite named Leonard, who's pushing 30, wears the same atrocious tan jacket every day and has moved back into his parents' Brighton Beach apartment for reasons that aren't quite spelled out but don't need to be. (Heartbreak, mental illness and early-midlife loss of purpose are all implicated.)

Although this film is set in the 21st century and has the cell phones and hip-hop music to prove it, Gray's portrait of Jewish middle-class life in Brooklyn has a timeless, recurring-dream quality, both in ways he intends and (I suspect) in ways beyond his conscious control. Change the clothes, the cars and the extras, and you could tell the same story in 1975, or 1955. Leonard's parents -- wonderfully played by Isabella Rossellini and the Israeli actor Moni Moshonov -- are immigrants, figures from the Old World, temporally and culturally cut off from Leonard's rootless American existence. (Merely by her presence, Rossellini suggests another Old World connection, to the heritage of European cinema.)

Two radically different paths do indeed appear before Leonard, or so it seems, represented by the two lovers of the title. Sandra (Vinessa Shaw, a real discovery) is clearly the right girl for Leonard. If anything, she's way too much so. She's sexy, she's nurturing, she kind of likes that Leonard is arty and damaged -- and her dad is planning to buy out Leonard's dad's dry-cleaning business, and wants to install Leonard as heir to the empire. From Coney Island to Sheepshead Bay, from Gravesend to Fort Hamilton, no one will challenge their shirt-starching supremacy!

But then, of course, there's Michelle (Gwyneth Paltrow), the blonde shiksa from who-knows-where who just moved into Leonard's parents' cavernous, empty-feeling apartment building. (Gray has confessed that he shot in Jersey City, N.J., because he couldn't find the right empty building in Brooklyn.) She's got a drug problem, a rich and married boyfriend (it's a great little role for Elias Koteas), and a tendency to make unreasonable emotional demands of Leonard -- panicked text messages; late-night rooftop confessions -- and then disappear. Naturally, he's massively hooked on her, and naturally she insists, no no no, she just wants to be friends. Best, best friends, who maybe mess around a little. But just friends. Paltrow should play bad girls, or at least badly screwed-up girls, more often; this is a far more interesting performance than she gives in ordinary ingenue roles.

In almost any other imaginable movie that tackled this material -- incipient dry-cleaning monarch plus meddlesome Jewish mother plus good-girl-from-nice-family plus blonde hottie -- it would come out either as farce or as romantic comedy, played with exaggerated nasal accents. Gray's peculiar accomplishment here is to turn this story into an intense emotional drama, beautifully photographed and profoundly ambiguous, suspended somewhere between realism and psychosexual allegory. I said earlier that "Two Lovers" was about a romantic triangle, but it's really some other shape, a rectangle or a rhombus, with Leonard's mother, watching over him like a worried lioness, as the fourth limb.

Most miraculous of all, while the story has a mythic, almost inevitable quality, its characters are complicated and uncertain, in ways you often encounter in life but rarely or never do in American movies. Most obviously, Leonard is pinioned between two visions of life, one of which seems unacceptable and the other impossible. It isn't just that he doesn't know whether he wants Sandra or Michelle, bourgeois stability or bohemian escape; it's more that he's clinging desperately to the illusion that he actually has the freedom to choose between them.

Does it all work, meaning the movie and the relationships and Gray's complicated effort to rehabilitate old-fashioned narrative by destroying it? I'm not quite sure, although "Two Lovers" is fascinating and often beautiful and I liked it even better the second time through. The two young female characters are more tenuously sketched than Leonard, but both of them still have personality undertow beneath the surface. Michelle is a damaged narcissist who inflicts and suffers needless pain, while Sandra seems like a borderline obsessive, overly eager for romantic martyrdom.

It might be easy to say that Sandra really loves Leonard and Michelle doesn't, but I don't think anything about "Two Lovers" is that compartmentalized. Both of them love him in their way, and he loves each of them back in his own. They will all hurt each other. Rossellini's character, too, is much more than an emasculating-mom caricature; sure, she's a wife and mother, a pillar of her community, and her first instinct is to work toward the continuity and conformity of a Leonard-Sandra marriage. But Leonard is her son, after all, and she understands more about his darker places, his neuroses and longings, than he realizes.

Gray's previous film, "We Own the Night," ends with Phoenix's criminal-turned-cop character surrendering to his destiny. In the last scene, he tells his long-estranged brother (Mark Wahlberg) that he loves him, while his face reveals all the oceanic inner tumult so often concealed by that phrase. "Two Lovers," one could argue, ends with exactly the same scene played in a different context, one in which Gray shoots for a more nuanced balance between agony and tenderness, resignation and possibility, irony and pathos. Whether you find Leonard's story inspiring or depressing -- and whether you find Gray's movie marvelously refreshing or preposterous -- hangs in the balance.

Like any self-respecting mob movie, "Gomorrah" ends and begins with killings, which are meant to drive home a starker but essentially similar lesson in destiny: Those who choose this way of life have chosen their own death. Garrone opens the film with a hallucinatory sequence of several meatheads getting gruesomely gunned down in a Naples tanning parlor. Who are they, and why are they being murdered? We never find out. In the last scene, we see two of the film's main characters getting their own comeuppance; we know them well and understand their idiotic mistakes. None of that matters when the front-end loader arrives to bury them in an unmarked grave on the beach.

If James Gray often cites mid-period Fellini ("La Strada," and especially "Nights of Cabiria") as his inspiration, Garrone reaches for another problematic Italian genius, Michelangelo Antonioni, to help him frame this interlocking, multi-stranded drama about the infamous Neapolitan mob known as the Camorra. With tentacles reaching into every area of Italian life, and an estimated three-decade death toll of 4,000, the Camorra is much more than an organization of drug dealers, loan sharks and hit men. As revealed in the nonfiction bestseller by Roberto Saviano -- who has been forced to live undercover for much of the past two years -- it's closer to being an alternate society, more violent but arguably more functional than the official Italian state.

Because "Gomorrah" follows five disparate narratives about people stuck to various strands of the Camorra's web -- from two low-life street kids dreaming of Tony Montana-style guns and glory to a toxic-waste disposal contractor to an haute-couture tailor working covertly with Chinese immigrants -- some North American viewers have been reminded of "The Wire" and "The Sopranos." Those influences are in there, I guess, especially in the way killings are often unseen or barely seen -- a blur, a loud noise, and somebody's on the ground --and in the ubiquitous pop-culture debris and in the presentation of the Camorra soldiers' dingy, monotonous working conditions.

But this film never feels like copycat Americana to me. Its vision of the bleak, ruined, urban-cum-rural landscape of Naples and environs is distinctively European and postmodern, redolent of the spiritual and physical desolation Antonioni captured so memorably in "Red Desert." And while American crime dramas revel in the pseudo-Shakespearean depth of their characters (Tony Soprano was first and foremost a family man) Garrone holds them at arm's length, almost dispassionately. Indeed, it's just as well not to get too involved with these people, since they're likely to end up killing, betraying and being killed, in that order, and anything about them that is dignified or decent will be destroyed. The crime bosses in "Gomorrah" are not impressive, Lear-scaled figures; the one we meet most often is a shirtless, video-game-addicted slob who makes Tony Soprano look like Lorenzo de Medici.

To be fair, there are characters in "Gomorrah" who make principled decisions to resist the depravity that has literally and figuratively poisoned the country around them. But Garrone doesn't want us to get too cozy with those people either, or to find much comfort in liberal-humanist cliché against this landscape of near-total corruption. Late in the film we see a truck driver stop for a cup of roadside coffee. He catches a few minutes of TV, watching Scarlett Johansson arrive at a film premiere in Venice. He views her gorgeous white gown with professional pride; he designed it and sewed it, after all, during his Camorra-fueled career as a couturier, the one he's now left behind. Then he gets back behind the wheel with his cup of joe and pulls out. Hey, it's better than the front-end loader.