The White House is making policy in public, and it's messy. 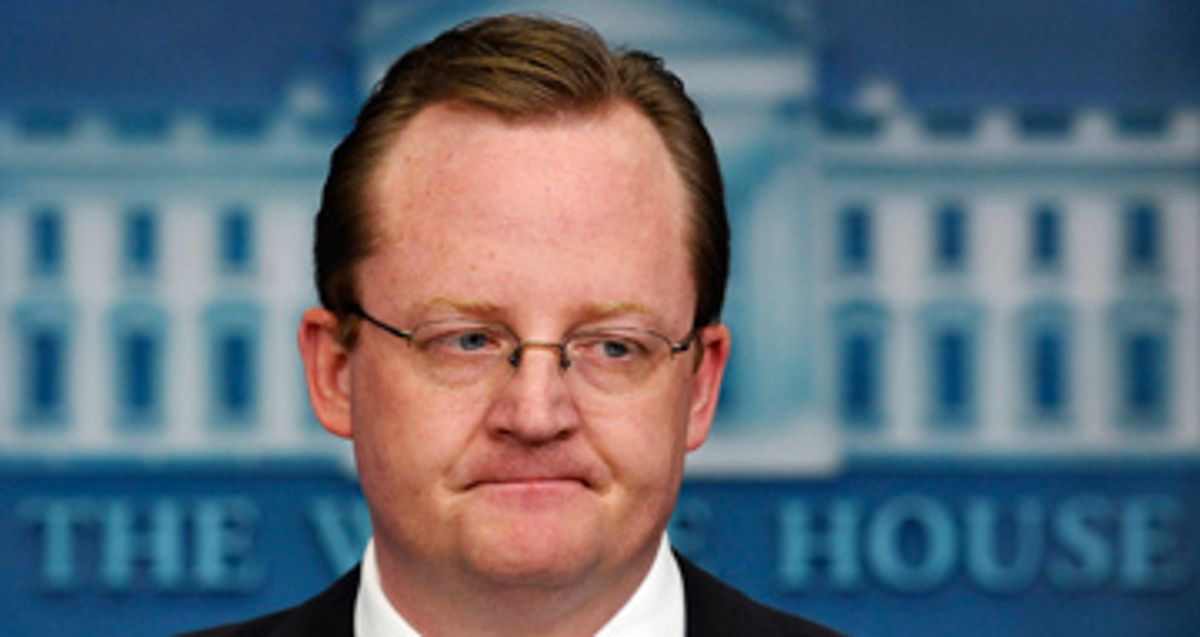 By the time Congress had all but finished haggling over a $789 billion economic stimulus bill that Barack Obama once wanted on his desk, ready to be signed into law, on Jan. 20 the White House was firmly in "declare victory and go home" mode. Even if it was a few weeks later than planned.

"The White House believes we're taking steps to make good progress toward a final solution on this recovery plan that will have a positive impact on our economy," press secretary Robert Gibbs said, just as members of the Senate were holding what turned out to be a premature news conference announcing that a deal had been reached to push the stimulus through to passage. The House hadn't even signed off on the deal the Senate had cut, but Gibbs spoke with all the self-assurance of someone who knew the White House would back whatever the lawmakers agreed on -- and who knew they'd agree on something soon. "We're certainly hopeful, as we have been throughout this process, to get it done quickly. I don't know whether that announcement is today, or soon, but we're certainly hopeful. It appears as if we've got, again, we've got Democrats and Republicans working together to get an agreement moved forward."

Never mind if the plan wasn't exactly what anyone wanted, including Obama; whenever it passes, and whatever's in it, Obama's administration plans to take credit for it. Now the White House seems to be in the same mode when it comes to the administration's plan to stabilize Wall Street, despite resounding criticism of the plan, or at least Treasury Secretary Tim Geithner's description of it Tuesday. From Republicans, who said the rescue plan would add even more money to the deficit, to liberal Democrats like Rep. Barney Frank, who wondered why the administration wasn't doing more about home foreclosures, carping about the presentation was about the only thing in town that was truly bipartisan this week. Just don't tell Gibbs that. "[I] hesitate to judge the breadth of this and the comprehensiveness of this based on one day's reaction," he said Wednesday, defending the plan, resolutely, in a press briefing. "I don't think that's how we judge the health of the financial system, and I don't think it should be how one judges this plan."

But once again, the White House may be setting itself up for the same kind of grief it got before Obama stepped up the pressure on the stimulus package. They've put out the broad outlines of a plan, then left some of the details to be filled in later. Some of them may be filled in by Congress, which means they'll drift out of the control of Obama (even if proxies like his chief of staff, Rahm Emanuel, will be shepherding them). But the administration doesn't seem to be worrying about how the debate goes from a policy's introduction to a final victory. Instead of unveiling a completely finished proposal and pushing it along with a concerted P.R. effort, the White House is letting its policies evolve in public, even if that causes a few days of bad news cycles when critics inevitably weigh in.

On the stimulus, that approach seemed to work, though it looked a little shaky a week ago, as Republicans -- surprisingly -- held together in opposing the legislation and managed to pick out tiny fractions of the bill to rally skeptics around. The bill is still on track for passage, and though there's plenty of grumbling about the details, the bottom line is it's roughly where Obama wanted it to be all along. "If you're a results-oriented person, you notice that they got what they wanted," said one senior Democratic aide on Capitol Hill.

But the administration is taking hits in the daily spin battle that could be easily avoided, even if Obama winds up winning in the end. And the White House has only itself to blame for that. The president is far more popular than any member of Congress could dream of being -- for proof, look how quickly polling on the stimulus turned around once Obama started selling it himself. Why not take control of the debate from the outset?

Part of the answer to that question might be that the administration isn't even paying attention to any hitches along the way, as long as it gets what it wants when the fighting is over. "One thing that we learned over two years is that there's a whole different conversation in Washington than there is out here," senior White House counselor David Axelrod told reporters on Air Force One on Monday, as Obama flew to Elkhart, Ind., to push for the stimulus plan. "If I had listened to the conversation in Washington during the campaign for president, I would have jumped off a building about a year and a half ago."

Obama's aides showed throughout last year's campaign that they've got more patience than most TV pundits or anyone else caught up in the 24-hour news cycle. A setback that lasts a day or two -- or even a week or two -- doesn't appear to bother them the way it would most political operatives. "They aren't having a great week, but they're winning," one Democratic aide said Wednesday, marveling. Even as news reports swirled, last week, that the stimulus plan didn't have the votes to get through the Senate, White House aides said privately they were sure it would pass -- and attract bipartisan support when it did.

Whether the "no drama" style lasts all four (or eight) years of Obama's term remains to be seen. For now, at least, there's not much reason to doubt it can. A few hours after Gibbs calmly praised Congress for an agreement on the stimulus bill that he admitted he didn't know the details of, the formal declaration of victory from Obama himself arrived by e-mail from the White House press office. The House still hadn't officially come on board, but Obama wasn't worried. "I'm grateful to the House Democrats for starting this process, and for members in the House and Senate for moving it along with the urgency that this moment demands," the president said in a statement. On to the next battle, which the White House is already sure it'll win as well.