WSJ Editorial Page: Can a newspaper be more misleading than this?

The right-wing editors complain that Bush could never get away with pre-selecting the reporters who could ask Press Conference questions, even though Bush did exactly that. 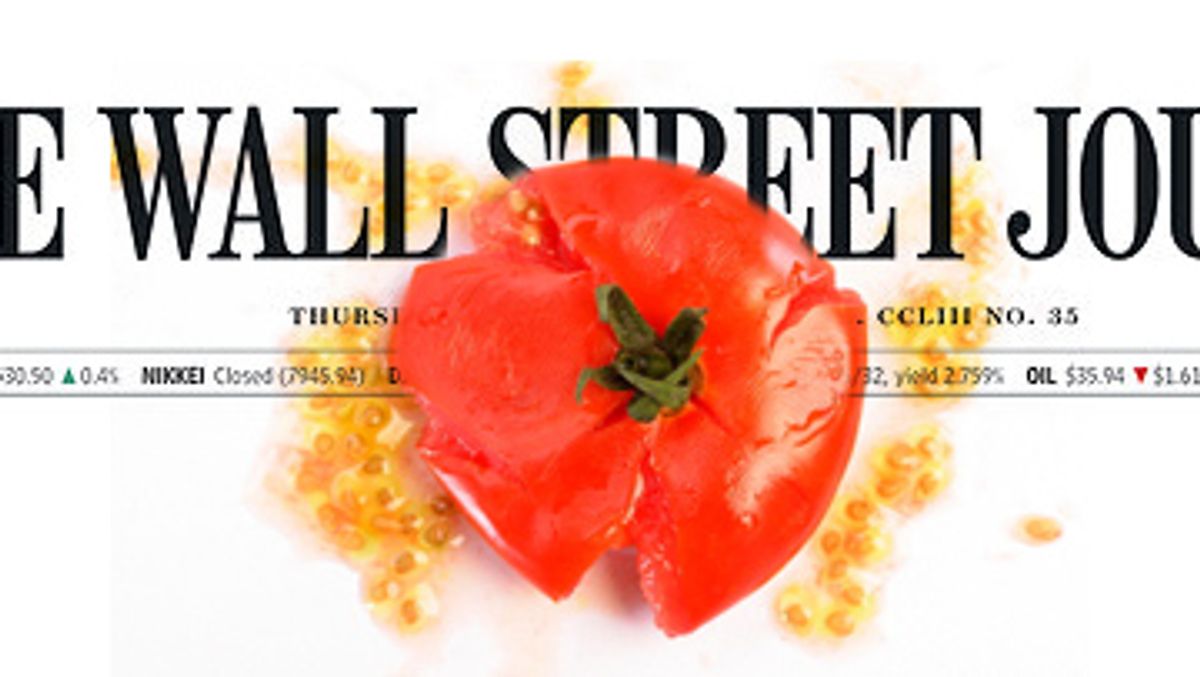 About half-way through President Obama's press conference Monday night, he had an unscripted question of his own. "All, Chuck Todd," the President said, referring to NBC's White House correspondent. "Where's Chuck?" He had the same strange question about Fox News's Major Garrett: "Where's Major?". . . .

The President was running down a list of reporters preselected to ask questions. The White House had decided in advance who would be allowed to question the President and who was left out. . . .

We doubt that President Bush, who was notorious for being parsimonious with follow-ups, would have gotten away with prescreening his interlocutors.

O'REILLY: Look, [Obama] had those guys written down, who he was going to call on. Now, in other press conferences, they'd just look around and go: "this one, that one, this one" - correct?

FLEISCHER: Well, George Bush never did that. . . . Writing it down gives the President more control.

O’REILLY: OK, so George Bush came in with a list of guys he was going to call on?

FLEISCHER: Yes, I used to prepare it for him. I would give him a grid, show him where every reporter is seated. And there are some reporters, you know, in that briefing room, you can imagine, Bill, you get a lot of dot coms and other oddballs who come in there. They’re screened.

FLEISCHER: And I used to seat them all in one section. I would call it "Siberia." And I told the President, "Don’t call on Siberia."

At one point while making his way through the press questioners, Bush awkwardly referred to a list of reporters whom he was instructed to call on. "This is scripted," he joked. The press laughed. But Bush meant it was scripted, literally. White House spokesman Ari Fleischer later admitted he compiled Bush's cheat sheet, which made sure he did not call on reporters from some prominent outlets like Time, Newsweek, USA Today, or the Washington Post.

In fact, the [] only moment of candor [of the March 6, 2003 Press Conference] may have come when Mr. Bush admitted during the conference that he was calling on reporters according to his pre-arranged list of names, which his press secretary, Ari Fleischer, later copped to preparing.

"This is scripted," Mr. Bush joked.

Strangely, many reporters laughed at this remarkable joke, which had the additional benefit of being true.

Deliberate deceit or complete editorial recklessness from The Wall St. Journal Editorial Page?  And which is worse?  Are there any limits at all to the factually false claims newspapers can spew without correction?  We'll see.  And of all the canards filling the overflowing canon of self-pitying right-wing grievances, the complaint that the Beltway media was unfairly and excessively critical of the Bush presidency has to be the single most laughable (as even Bush's own Press Secretary will tell you).

Perhaps most pitifully of all, the WSJ Editors end with a condemnation not only of Obama for pre-selecting the reporters, but also of other newspapers for failing to make an issue of it:

Few accounts of Monday night's event even mentioned the curious fact that the White House had picked its speakers in advance. We hope that omission wasn't out of fear of being left off the list the next time.

This -- from the same newspaper Editors who are either dishonestly concealing or never bothered to notice that the former President, the one who served their ideological agenda, did exactly the same thing.