The Berlin International Film Festival offers a break from Starbucks-style cinema, and even Ren 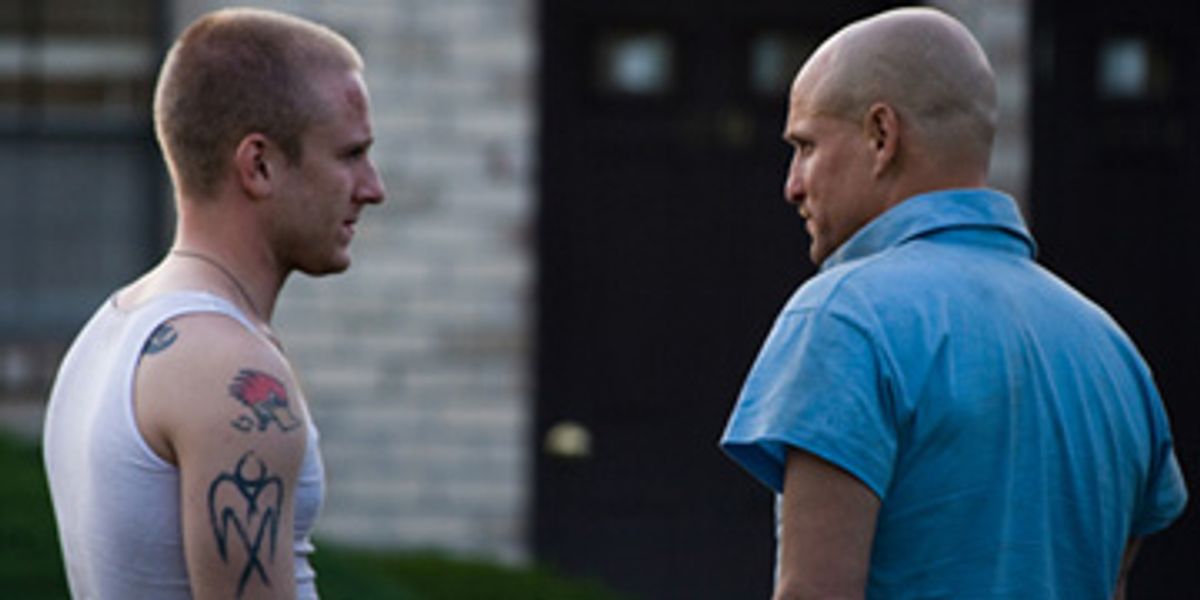 Berlin is a city of many enchantments -- for example, the little supermarket around the corner from my hotel, which is hardly super and barely a market. I'm sure there are lovely, softly lit, well-stocked supermarkets in Berlin, with canned music ringing through the aisles and cheerful clerks in logo-embroidered polo shirts. But this place -- a ways down the street from the Potsdamer Platz, which is where most of the movies in the Berlin Film Festival are shown -- has to be among the ugliest, dimmest, most somber and depressing shopping establishments I've ever set foot in, and I love it anyway. Its proper name is Aldi Markt, and I affectionately call it the GDR Mart, not because it's literally a GDR remnant (it's actually part of a large German chain), but because its no-frills decor and service make it seem like a relic of an earlier time. The place is clean but not cheerful; if you don't bring your own bag, the cashier will glare at you. This year the city is celebrating the 20th anniversary of the dismantling of the Berlin Wall, and now, on both sides of that gone-but-not-quite-forgotten division, you can find all sorts of sparkling American fast-food and coffee chains, as well as their German or European equivalents. But there are no cheerful logos outside the GDR Mart, and you'd better bring your own bag, or else. Then again, some habits are worth preserving -- or resurrecting.

One of the great things about film festivals is that they offer a chance to get away from Starbucks-style movies -- that is, products that have been tested, packaged and marketed to make you believe that everyone in the world naturally ought to like the same things, and if you don't, you're out of step (which is pretty much how I feel about Starbucks coffee, the taste of which I loathe). Into the non-Starbucks category I'd put "Katalin Varga," a Romanian/U.K./Hungarian coproduction directed by a British expat, Peter Strickland. In "Katalin Varga," a young woman who we suspect has a troubled past (she's played by a restrained, intense actress named Hilda Peter, who looks a little like a dark-haired Anne Heche) takes her 10-ish son and leaves her home on a horse-drawn cart, rumbling through the scrubby, rock-strewn terrain of the countryside. The peasant alarm went off in my head when I saw that cart. As I said afterward to my esteemed colleague Derek Malcolm, of the London Evening Standard, I usually have a low tolerance for simple stories about peasants. "I have a low tolerance for complicated stories about the middle class," he said. But we both liked "Katalin Varga," which may start out as a simple story about peasants but which ends up as something rich and dark and surprisingly invigorating, a movie about revenge and redemption that has the qualities of both a fairy tale and an all-too-real nightmare -- it's like a countryside noir as imagined by David Lynch. (The movie's eerie, shivery electronic score reinforces the movie's Lynchian qualities.) Strickland and his cinematographer, Mark Gyori, obviously working with a slim budget, make the most of their resources. In long shot they show us a herd of sheep grazing in a field, but they hold the camera there for so long that this otherwise typically dull pastoral image takes on a surreal quality: As the sheep root about in the grass, they begin to look like vibrating molecules seen under a microscope -- perhaps a way of reminding us that even when a story about "peasants" seems faraway and remote from most of our lives, up close, we're all made of the same stuff.

And then Stephen Frears' adaptation of Colette's compact but lush novel "Chéri," which I was greatly looking forward to seeing, left me longing for the good, solid dirt of the Eastern European landscape. Michelle Pfeiffer stars as Lea de Lonval, the aging courtesan who takes up with a much younger lover, nicknamed Chéri (Rupert Friend), the son of one of her former rivals (played, with too much comic eye-rolling, by Kathy Bates). The production values are high: Shot by Darius Khondji, the movie has a satiny, candy-box look. But even though "Chéri," was filmed partly on location in France, it's the most un-French adaptation of Colette I could possibly imagine.

The problem isn't that Frears is English: His "Dangerous Liaisons," in which Pfeiffer also appeared, is perfectly, acceptably Gallic in tone, albeit with an English twist. But Pfeiffer plays Lea's confident self-sufficiency with too much crispness; she needs to be flirtier, more devil-may-care (in the French way) and less "Let's get on with it, shall we?" (in the English way). Her line readings are stagy and forced, though when she's not speaking, she's at least expressive enough around the eyes (if not, ahem, between them) to convey Lea's emotional fragility. Still, this "Chéri" could have, and should have, been so much more. It left me feeling très bummed.

One of the strongest, most resonant pictures I've seen here in Berlin is Oren Moverman's directorial debut "The Messenger," which played at Sundance and, after its well-received appearance here in Berlin, will probably start getting the attention it deserves. Ben Foster stars as a wounded Iraq war veteran recently returned to the States. In his new assignment, he's teamed with Woody Harrelson -- a veteran of the "cushier" Gulf War -- and entrusted with the difficult job of notifying the next of kin (or NOK, for short) that their loved ones have been killed in the line of duty.

In the autumn of 2007, when we saw the first rush of war-related pictures like "In the Valley of Elah" and "Rendition," writers across the land (including me) were asked by their editors to grapple with the significance and meaning of these movies. The problem was that, with the exception of Brian De Palma's passionate and disturbing "Redacted," most of them were mediocre at best and gutless at worst. In terms of filmmaking, "The Messenger" marks a new beginning for the real work of dealing with the Iraq war mess. Moverman co-wrote Todd Haynes' extraordinary Bob Dylan un-biopic "I'm Not There"; he also co-wrote Ira Sachs' wry (if a bit too mannered) "Married Life." Although Moverman doesn't have a particularly strong visual sense, "The Messenger" is still a confident and effective directorial debut, partly because Moverman has good narrative instincts, but also because he shows a graceful touch with his actors. Maybe that's no surprise with an actress like Samantha Morton, who plays a widow befriended by Foster. I've never seen Morton give a bad, or even a merely adequate, performance -- she's the only contemporary actress who can break my heart with nothing but the curve of her smile. But Foster, whom I found distressingly hammy in "3:10 to Yuma," dials it way down here: He doesn't show suffering on his face; he carries it in his bones, as if he realizes that the suffering after the fighting is the greater part of his duty. Moverman has made a tough, compassionate little picture -- with some great and necessary dashes of black humor -- that opens a new door into the world of damage, at home and everywhere, that we now need to face squarely.

Other mild disappointments and modest surprises: "London River" is Rachid Bouchareb's first movie since his astonishing Oscar-nominated 2007 feature "Days of Glory" (or "Indigènes"), and while it's a generous-natured exercise, it's so unsubstantial it practically slips off the screen. Brenda Blethyn plays a farm woman from Guernsey who, right after the 2005 London bus bombings, goes to the capital in search of her missing daughter, and is shocked -- shocked! -- to find the place, as she puts it, "crawling with Muslims." Naturally, she comes to learn that Muslims are people too, but it takes a while. The Malian actor Sotigui Kouyaté's rich, understated performance, as a fellow traveler also searching for his child, at least gives the movie some ballast.

English director Richard Loncraine's "My One and Only," a feathery but not unpleasant period picture (set in the 1950s) that's loosely based on the early life of the perpetually tan George Hamilton, has partially restored my faith in Renée Zellweger as an actress: Here, she's playing a woman close to her own age -- let's say 40-ish -- who's trying to find a husband to support herself and her two sons, even as she realizes that her sexual allure may be on the wane. The performance is conspicuously lacking in the desperate cuteness Zellweger has been peddling these days (most recently in the aw-shucks romantic comedy "New in Town") and suggests that, if she can only bring herself to be less adorable, she may once again be a pleasure to watch. Here's hoping.

And with that thought, I leave the 2009 Berlinale. The mood here among distributors and deal makers has been understandably subdued. Given the grim global economic climate, the road ahead for foreign and small, independent pictures is obviously going to be bumpy. Then again, Variety reports a heartening increase in ticket sales among the public for the Berlinale: This year, the festival had sold 270,000 tickets by its halfway point, well over the 240,000 tickets sold during its entire run last year -- suggesting that at least in some places on planet Earth, people are still excited about going to the movies. And while no one here is particularly upbeat about the future of film or journalism and criticism, it's clear that no one is giving up, either. Meanwhile, let's start small: It never hurts to bring your own bag.