"Confessions of a Shopaholic"

This garish and glossy romantic comedy is as empty as the brands it ogles. 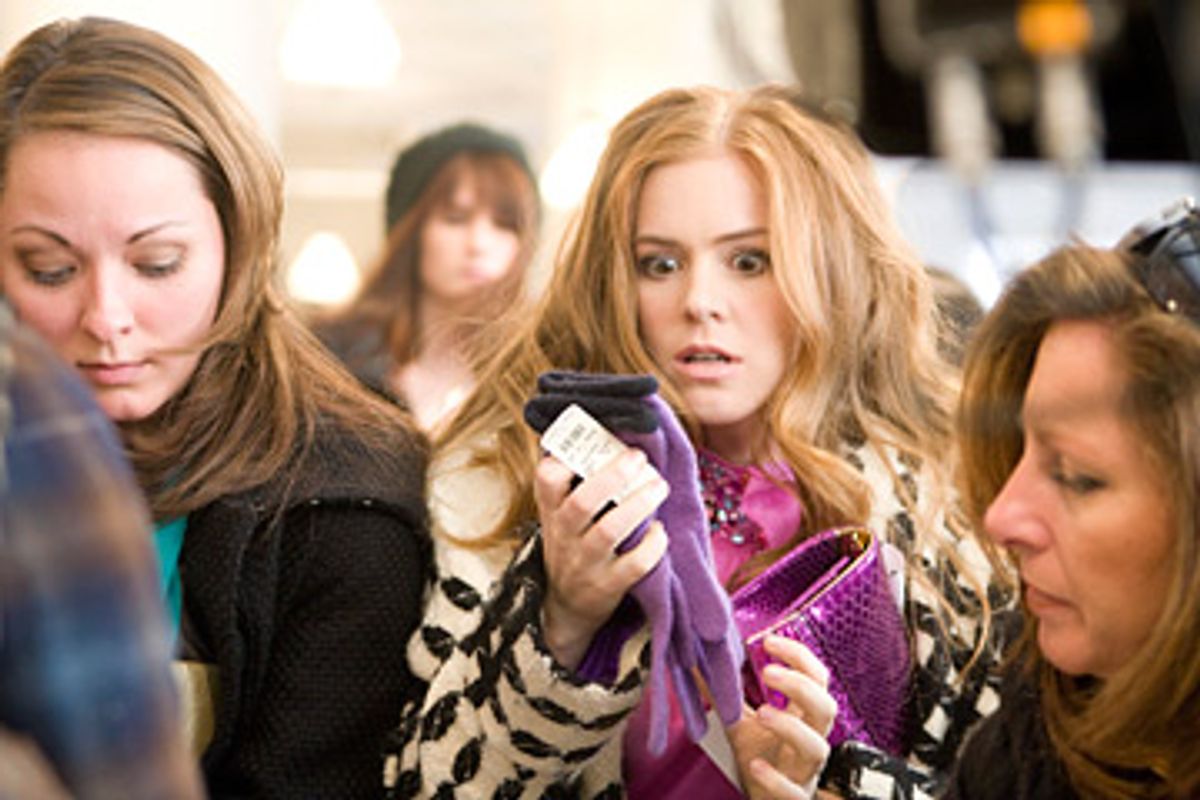 If the journalist protagonist of "Confessions of a Shopaholic" were reviewing her own film, she would probably compare it to a woman's shoe. So let's give it a try, shall we? If last year's slick and brand-conscious "Sex and the City" was a Manolo Blahnik stiletto, and if "The Devil Wears Prada" was a smart and classy thigh-high boot, then "Confessions of a Shopaholic" is like the fuchsia mukluks your cousin wore to your grandfather's funeral.

Based on the highly successful series of chick lit novels by Sophie Kinsella, "Confessions of a Shopaholic" is a loud, garish and very untimely romantic comedy about a brand- obsessed Manhattanite and her struggle to control her impulsive shopping. As Rebecca Bloomwood (played by the Australian actress Isla Fisher) puts it in the film's opening voice-over, the sight of a store makes her heart feel like "warm butter sliding down hot toast." She spends her money at upscale shops like Henri Bendel and Bloomingdale's and parades around the city wearing brightly colored gowns and carrying designer purses. Given her job as a writer at a gardening magazine, it's unsurprising that this pursuit has left her with more than $16,000 in credit card debt and dodging aggressive phone calls from debt collectors.

The film takes off when Bloomwood improbably lands a new gig as a columnist at Successful Saving, a financial planning magazine run by the handsome and British Luke Brandon (Hugh Dancy). Despite her lack of financial expertise, Brandon hires Bloomwood to write a savings advice column called "The Girl in the Green Scarf." It becomes an improbable hit -- thanks to Bloomwood's knack for clothing metaphors -- and soon enough, as tends to be the case in these situations, Bloomwood and Brandon begin falling in love. But in order to win his heart, she'll need to hide her fiscally irresponsible lifestyle, keep a debt collector at bay and fend off the rival advances of Alicia Billington (Leslie Bibb), an employee at a Vogue-like fashion magazine.

As she proved in "Wedding Crashers," Fisher is an actress with a gift for physical comedy. Unfortunately, in "Shopaholic," her slapstick, along with everything else in the film, is cranked several notches too high. During her initial interview at Successful Saving, for example, Bloomwood bungles things by hiding an expensive scarf under a desk, failing to open her purse and screaming at a billboard ad. This mayhem seems funny at first, but by the time she teeters into a glass wall on her way out of the office, Bloomwood doesn't seem endearing or goofy, she seems mentally ill.

The film then lurches from one plot point to the next without any time to breathe or make much sense. The growing attraction between Bloomwood and her boss is as illogical as it is dispassionate, and supporting appearances by John Goodman, Joan Cusack and Fred Armisen are short and wasted. At one point, Fisher manages to milk some laughs out of a slapstick dance number in which Rebecca hits Brandon with a fan, but the vast majority of the film's jokes fall flat.

Although "Shopaholic" is targeted at women, it also seems to have a remarkable contempt for its female characters -- most of whom appear to have the maturity and smarts of a petulant 8-year-old. When Bloomwood pretends that a debt collector is a stawkerish ex-boyfriend, a nearby secretary inexplicably chimes in: "I was once stalked  ... by a dog." Bloomwood's roommate (Krysten Ritter) giggles and flounces around their technicolor apartment, and the women Bloomwood encounters at sample sales scream and claw at each other like feral cats.

While the film aims for a lighthearted quirkiness and a redeeming message about the virtue of frugality, it's undermined by the heavy gloss of its execution. Given that "Shopaholic" was produced by Jerry Bruckheimer, the man behind blockbusters like "Top Gun" and "Armageddon," this shouldn't come as much of a surprise. Bruckheimer has once again applied the formula he knows best: The film is production-designed within an inch of its life (think "Amelie" meets "Speed Racer"), the editing is swift, and the camera movements are sweeping. The film also obsessively names the luxury brands -- Gucci, Prada, Yves St. Laurent, Catherine Malandrino, among many others -- that Bloomwood is trying to give up. It tries to have it both ways: ogling the designer clothes while pretending to be above them.

The film's real weakness, however, isn't its conflicted take on consumption, but its lack of heart. In these heady economic times, audiences are understandably looking for a little escapism, but they deserve better than the empty calculation of "Confessions of a Shopaholic." To use another of Bloomwood's conceits, nobody wants to pay for a cashmere coat and discover that it's a cheap knockoff. "Confessions of a Shopaholic" may not look cheap, but, rest assured, it's definitely a fake.