Obama and liberals: a counter-productive relationship

Prioritizing support for a political leader as the highest objective is horribly bad for both a political movement and the leader. 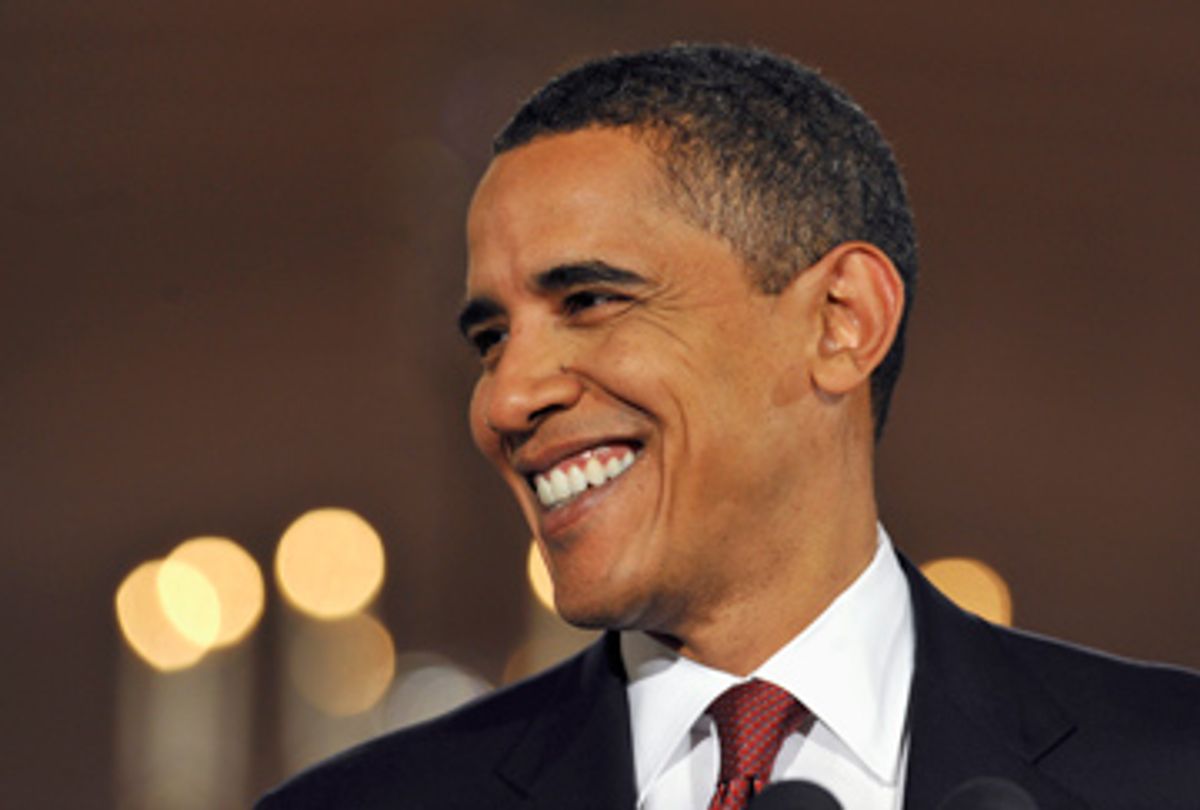 The New Republic's John Judis today has an excellent analysis of the politics behind the stimulus package -- one which applies equally to most other political controversies.  Judis argues that the stimulus package ended up being far inferior to what it could have been and points to this reason why that happened:

But I think the main reason that Obama is having trouble is that there is not a popular left movement that is agitating for him to go well beyond where he would even ideally like to go. Sure, there are leftwing intellectuals like Paul Krugman who are beating the drums for nationalizing the banks and for a $1 trillion-plus stimulus. But I am not referring to intellectuals, but to movements that stir up trouble among voters and get people really angry. Instead, what exists of a popular left is either incapable of action or in Obama's pocket. . . .

A member of one liberal group, Campaign for America's Future, pronounced the stimulus bill "a darn good first step." MoveOn -- as far as I can tell -- has attacked conservative Republicans for opposing the bill, while lamely urging Democrats to back it. Of course, all these groups may have thought the stimulus bill and the bailout were ideal, but I doubt it. I bet they had the same criticisms of these measures that Krugman or The American Prospect's Ezra Klein or my own colleagues had, but they made the mistake that political groups often make:  subordinating their concern about issues to their support for the party and its leading politician.

By extremely stark contrast, Paul Krugman today explains why Republicans are so unified in their opposition to this bill and their willingness to uphold the principles of their supporters:

One might have expected Republicans to act at least slightly chastened in these early days of the Obama administration, given both their drubbing in the last two elections and the economic debacle of the past eight years. But it’s now clear that the party’s commitment to deep voodoo — enforced, in part, by pressure groups that stand ready to run primary challengers against heretics — is as strong as ever.

[As an ancillary matter:  though I agree with Krugman's principal point, I dislike his use of the word "heretics" here. It invokes one of the worst myths in our political discourse:  the idea that there's something wrong, intolerant or "Stalinist" about pressuring or even campaigning against incumbents "from one's own party" who advocate positions that you think are bad and wrong.  That activity happens to be the essence of democracy, and we need more, not less, of it.  If anything is Stalinist, it's the sky-high incumbent re-election rates and the sense of entitlement in our political class that incumbents should not ever face primary challenges even if they support policies which the base of the party reviles.  Why shouldn't GOP voters who love tax cuts and hate government domestic spending, regardless of whether they're right or wrong, demand that their elected representatives support those views (in exactly the same way that Democratic incumbents who supported the Iraq war and/or Bush's lawless surveillance state should have been targeted for defeat)?]

But Krugman's larger point is correct:  Republican groups demand from politicians support for their beliefs.  By contrast, as Judis describes, Democratic groups -- including (perhaps especially) liberal activist groups -- now (with some exceptions) lend their allegiance to the party and its leader regardless of how faithful the party leadership is to their beliefs.  That disparity means that there is often great popular agitation and political pressure exerted from the Right, but almost none from the Left (I'm using the terms "Left" and "Right" here in their conventional sense:  "Right"  being the core of the GOP and "Left" being those who most consistently and vigorously opposed Bush's foreign and domestic policies).

During the 2008 election, Obama co-opted huge portions of the Left and its infrastructure so that their allegiance became devoted to him and not to any ideas.  Many online political and "news" outlets -- including some liberal political blogs -- discovered that the most reliable way to massively increase traffic was to capitalize on the pro-Obama fervor by turning themselves into pro-Obama cheerleading squads.  Grass-roots activist groups watched their dues-paying membership rolls explode the more they tapped into that same sentiment and turned themselves into Obama-supporting appendages.  Even labor unions and long-standing Beltway advocacy groups reaped substantial benefits by identifying themselves as loyal foot soldiers in the Obama movement.

The major problem now is that these entities -- the ones that ought to be applying pressure on Obama from the Left and opposing him when he moves too far Right -- are now completely boxed in.  They've lost -- or, more accurately, voluntarily relinquished -- their independence.  They know that criticizing -- let alone opposing -- Obama will mean that all those new readers they won last year will leave; that all those new dues-paying members will go join some other, more Obama-supportive organization; that they will prompt intense backlash and anger among the very people -- their members, supporters and readers -- on whom they have come to rely as the source of their support, strength, and numbers.

As a result, there is very little political or media structure to Obama's Left that can or will criticize him, even when he moves far to what the Beltway calls the "center" or even the Right (i.e., when he adopts large chunks of the GOP position).  That situation is extremely bad -- both for the Left and for Obama.  It makes impossible what very well might be the apocryphal though still illuminating FDR anecdote:

FDR was, of course, a consummate political leader. In one situation, a group came to him urging specific actions in support of a cause in which they deeply believed. He replied: "I agree with you, I want to do it, now make me do it."

As Judis points out, Obama, on some issues, might move to the Right because he wants to.  In other cases, he will do so because he perceives that he has to, because the combination of the GOP/Blue-Dog-following-caucus/Beltway-media-mob might force him to.  Regardless of Obama's motives, the lack of a meaningful, potent movement on the Left to oppose that behavior ensures that it will continue without any resistance.  The lack of any independent political pressure from the Left ensures that Obama will be either content to ignore their views or will be forced to do so even when he doesn't want to.

Prioritizing political allegiance to their leader was exactly the mistake the Right made for the first several years of the Bush presidency.  Even Bill Kristol admitted in The New York Times:  "Bush was the movement and the cause."  An entire creepy cottage industry arose on the Right devoted to venerating George W. Bush.  And it wasn't until well into his second term, when his popularity had already collapsed, that they began opposing him in a few isolated cases when he deviated from their beliefs -- on immigration reform, the Harriet Miers nomination, Dubai ports, the TARP bailout and the like.  But, by then, it was too late:  Bush became synonymous with "conservatism" because the latter wasn't really about anything other than supporting the President no matter what he did.  The ideological movement and their political leader had merged, and it was destructive for both of them.

Part of the political shrewdness of Obama has been that he's been able to actually convince huge numbers of liberals that it's a good thing when he ignores and even stomps on their political ideals, that it's something they should celebrate and even be grateful for.  Hordes of Obama-loving liberals are still marching around paying homage to the empty mantras of "pragmatism" and "post-partisan harmony" -- the terms used to justify and even glorify Obama's repudiation of their own political values.  Talk Left's Armando described the oddness of this mentality:

Sen. Tom Harkin, a liberal Democrat from Iowa, said fellow Democrats had surrendered too much in a bid to appease three moderate Republicans who can ensure passage in the Senate.

"I think our side gave in too much in order to appease a few people," he said in a hallway interview in the Capitol earlier on Wednesday. He said Democrats should have dared Republicans to filibuster and "see what the public outcry" would have been. "I think the people are getting shortchanged."

Imagine if Bill Clinton had capitulated like this to a Republican Congress in 1995? Or said "up yours" to the ACLU the way Obama did? Do you think the cries of "sellout" would be hard to find today? Me neither.

Political ideas and values that have no meaningful pressure being exerted on their behalf will always be those that are most ignored.  That's just the most basic rule of politics.  Last year, Accountability Now was created to provide exactly that pushback against political incumbents, and there will be a major announcement very soon along with its formal launch (an Executive Director has been hired and much of the infrastructure has been created and the groundwork laid).  For the moment, on one issue after the next, one can vividly observe the harm that comes from a political faction being beholden to a leader rather than to any actual ideas or political principles.

UPDATE:  Greg Sargent obtains a letter today from the Obama DOD regarding conditions at Guantanamo which nicely illustrates the need for ongoing, constant pressure on the administration -- here.

And Matt Yglesias identifies another harm from having liberals defining themselves by "whatever Obama supports":

If you succeed in muting all your critics to the left, all you do is create a situation where your program is defined in the press and the congress and the public imagination as the most-leftwing-possible proposal. And the furthest-left proposal can’t possibly win. It’s never helpful to have fratricidal warfare and battles to the death, but it’s necessary for there to be meaningful pressure to do more than is popular or possible or even necessary in order to lay the groundwork for accomplishing anything.

I wouldn't quite put it this way, because I don't believe that anyone should be advocating for positions to the Left of Obama simply as a tactic to make Obama's policies seem more centrist and therefore more likely to be accepted.  But his general point is still true:  criticizing Obama from the Left (as, say, Paul Krugman has been doing in the stimulus debate) expands the scope of the debate in a very important way that can only advance the Left's political goals and, incidentally, enable/force Obama to avoid the Center and Right.