A head-spinning new "Oliver Twist" reflects both the bleakness and the levity of Dickens' novel. 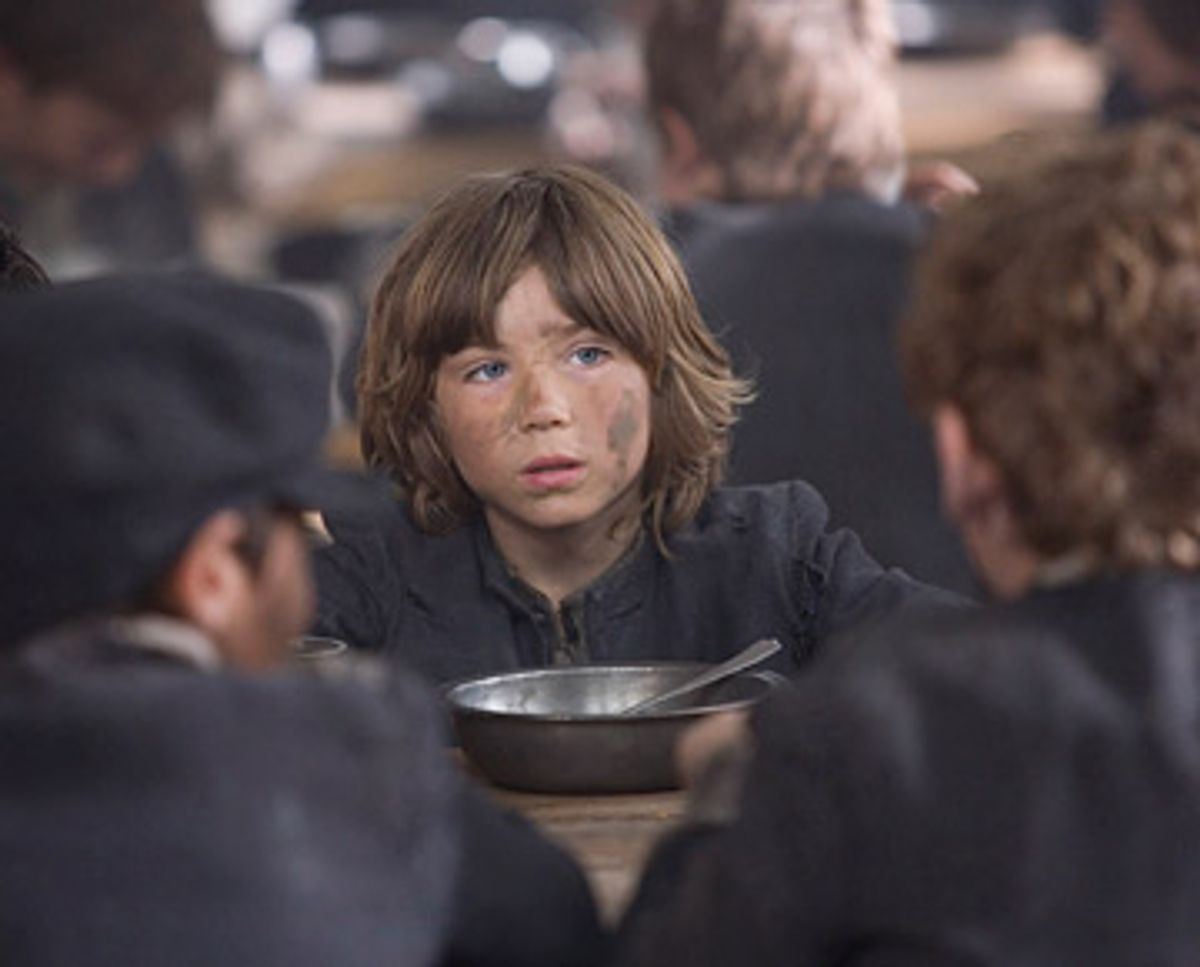 Poor little Oliver Twist. If you think times are tough today, just take a stroll through Oliver's England, a rainy, squalid place where workhouse orphans joylessly gulp down an eerie blue, maggot-ridden gruel as their sadistic caretakers look on with smug disapproval.

To those who were made to slog through Charles Dickens' works in school, PBS's upcoming two-part "Masterpiece Classic" (9 p.m. Feb. 15 and 22, check local listings) on "Oliver Twist" will feel like a fast-forward, CliffsNotes version of the original. All of the pivotal scenes from this tale of greed and depravity are included, of course: Here's Oliver as a baby, calm and sweet in his dying mother's arms, flanked by unsympathetic wretches. Here's Oliver, asking buffoonish workhouse tyrant Mr. Bumble, "Can I have some more?" to a raucous, climactic score (is that an electric guitar I hear?), a notable departure from the more subdued strings that typically make up the "Masterpiece" soundtrack. Here's Oliver charmed by the Artful Dodger, only to grow steadily more suspicious of Fagin and Bill Sikes and their ruthless entourage. Here's Oliver, unexpectedly taken in by Mr. Brownlow and Rose Maylie, bathed and fed solid meals and treated with pure kindness for the first time in his life. Hundreds of pages of Dickens, unfolding before your eyes within a head-spinning 30-minute stretch of storytelling!

Although "Masterpiece Classic's" take on "Oliver Twist" feels a little rushed at times, it's certainly true to the grim portrait Dickens painted in the original. Grappling for a safe haven in a cruel world, Oliver is surrounded by self-serving, deeply corrupt characters, captured nicely by an unusual cast with a real flair for Dickens' tragicomic sensibilities. Timothy Spall's twitchy countenance perfectly embodies Fagin's slippery mix of feckless patriarch, jester and crooked worm, while Tom Hardy personifies that intimidating menace Bill Sikes. Sophie Okonedo brings a palpable warmth and self-doubt to the victimized Nancy, while Adam Arnold walks a thin line between charming sneak and envious competitor as the Artful Dodger. And William Miller is wonderful as Oliver, with an open, honest face that nobody with a pulse could deny, but with none of the offensively cloying traits of most child actors, types so often prone to breaking into song at a moment's notice. (That said, it's tough not to hear the strains of "Food, glorious food! Hot sausage and mustard!" in one lively scene where Fagin offers Oliver the first solid meal of his life.)

Unfortunately, the casting and the score may be the two most interesting aspects of this production of "Oliver Twist." But then, it's a story that's been performed and re-adapted so many times by now that you'd practically have to set the whole thing in Ethiopia or put the entire ensemble in roller skates to catch our attention. Yes, a few of the details of the plot have been changed slightly to fit the medium, as is usually the case -- Mr. Brownlow is Oliver's grandfather here, and was also in love with his deceased mother, Agnes -- but the spirit of the story remains true to Dickens' intention. Accordingly, there's an almost cartoonish contrast between forces of good and evil -- the scene where Mr. Brownlow confronts Monks is particularly larded with "Scooby Do" morality. This was Dickens' very black-and-white view of England during the Victorian era, after all. "Masterpiece Classics" gives us what the author intended: a stark but still comical picture of Oliver navigating a society that was unthinkably unforgiving to those in need.

The whole thing would be worthwhile but ultimately forgettable, if not for some particularly heart-wrenching scenes where Okonedo really makes us feel for poor Nancy, the conflicted prostitute who loves that nasty Sikes in spite of herself. Okonedo allows us to see clearly the moment when Nancy's concern for Oliver overrides her instinct for self-preservation, so that, by the time she assures Oliver, "I'm going to get you out of here. I'm going to get you back to where there's books and sunshine coming through the windows," we can't help believing her.