When the big banks tanked

"Frontline" offers a play-by-play of how Bernanke and Paulson tried to prevent a catastrophe during last year's unprecedented financial implosion. 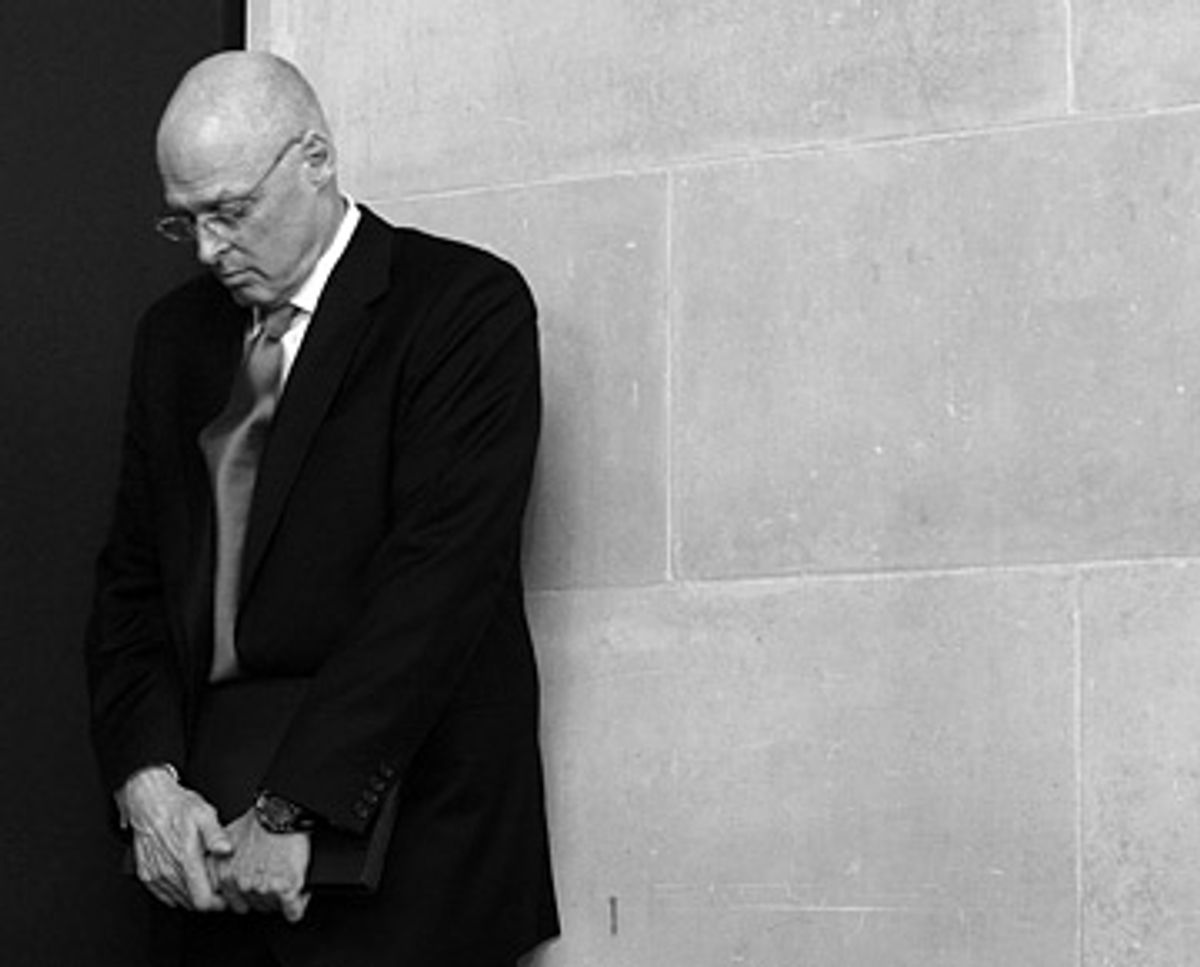 "What can you do if you're on the side of a mountain and an avalanche comes at you. An avalanche goes what, 60 miles an hour? You can't outrun it, right? So what can you do?"    -- Ace Greenberg, chairman of the Executive Committee of Bear Stearns

Bear Stearns' near demise began with rumors. The venerable investment bank had massive stakes in subprime mortgages, sure, but it also had $18 billion in cash reserves -- or at least it did before the dark talk began. Then its stock was sliced in half, and fearing bankruptcy, investors rushed to withdraw their cash. By the end of the week, cash reserves were down to $3.5 billion.

As unthinkable as it was to imagine a panic of Great Depression proportions, that's exactly what Federal Reserve Board Chairman Ben Bernanke and Treasury Secretary Henry Paulson were facing in March of 2008, when Bear Stearns' books revealed huge amounts of toxic debt and an interdependence on other banks that threatened to bring down the entire financial system. As Obama's new Treasury Secretary Timothy Geithner presents the country with a $2 trillion bank rescue plan this week, PBS's "Frontline" series looks back on the high-level meetings and panicked maneuvers that took place in the early days of our financial crisis in "Inside the Meltdown" (9 p.m. Tuesday, Feb. 17, on PBS, check local listings). From the near collapse of teetering giants Fannie Mae, Freddie Mac and AIG, to the eventual downfall of Lehman Brothers, this investigative play-by-play of the start of the financial crash unveils how the nation's banks, unregulated for so many decades, revealed themselves to be a disturbingly shaky house of cards.

By piecing together a colorful series of first-person accounts, "Frontline" does a nice job of capturing the sheer disbelief that arose the day that Bear Stearns' stock started falling precipitously, without warning. Author Bill Bamber called the day's events "nothing short of surreal." Desperate to set the record straight, the company's CEO, Alan Schwartz, sat down with CNBC anchor David Faber, only to have Faber suggest that Goldman Sachs, Bear's most important client, might stop working with them. As Bear Stearns' stock sank further, Geithner, then head of the Federal Reserve Bank of New York, examined the firm's books and realized that allowing the company to go under would set off a chain reaction of other bank failures. Geithner called his boss, Federal Reserve Chairman Ben Bernanke, at 4 in the morning. Soon, Bernanke and then-Treasury Secretary Henry Paulson were scrambling to find a way to keep Bear Stearns from falling and taking a bunch of other banks with it.

But Bear Stearns was just the beginning of a series of disasters encountered over the next several months by Paulson, a free-market Republican forced to contemplate an unthinkable financial black hole. Fannie Mae and Freddie Mac, behemoths that held $5 trillion in mortgages, quickly lost 60 percent of their stock value. Bernanke and Paulson moved to nationalize Fannie and Freddie, only to see Lehman Brothers stumble the next day. At this point, Jon Hilsenrath of the Wall Street Journal explains to the "Frontline" cameras, Paulson "started to show signs of bailout exhaustion."

Even so, Paulson took pains to personally warn CEO  Dick Fuld that Lehman had better find a buyer. Unfortunately, Fuld didn't seem to take Paulson's warnings seriously, perhaps assuming that if the government had bailed out Bear Stearns, naturally it would save Lehman, a much larger firm, from the jaws of death just in the nick of time.

Either because the public's opinion of risk-taking banks had soured or because Paulson was grappling with where to draw a line in the sand, the government instead allowed Lehman to fail. Of all the decisions made by Bernanke and Paulson last year, many observers consider this their biggest mistake. What followed was breathtaking: AIG, the world's largest insurance company, found itself on the brink of collapse and the banking system essentially shut down in a matter of days. As NPR's Adam Davidson puts it, "The safest companies in the world, the most rock-solid banks in the world, [were] unable to borrow money."

Economist and New York Times columnist Paul Krugman calls this an "absolutely terrifying moment" for Paulson. "I'm sure Paulson [was] sitting there saying, 'My God, we may be presiding over the second Great Depression.'"

Suddenly, Bernanke and Paulson were forced to get Congress involved in a broader rescue. Congressional leaders were summoned, and in rushed meetings they were told, "Unless you act, the financial system of this country will melt down in a couple of days." Paulson asked for  $700 billion to bail out the banks, then personally called the CEOs of the country's largest banks and told them to meet with him. He informed them that the government was going to give them billions of dollars and they didn't have an option not to take it.

"Inside the Meltdown" offers a fascinating blow-by-blow of last year's crisis and the emergency gambits performed along the way. Of course, as dramatic and unexpectedly intrusive as many of Paulson's moves were considered then, they're characterized as insufficient by Geithner as he unveils his own enormous banking bailout plan. In other words, as catastrophic, unpredictable and head-spinning as last year's financial nightmare was, apparently it was only the beginning.