From New Orleans to Antarctica, via the twin towers

An Oscar rarity -- at least three of the nominated documentaries are outstanding and deserve to win! Can the Academy find a way to snub them all? 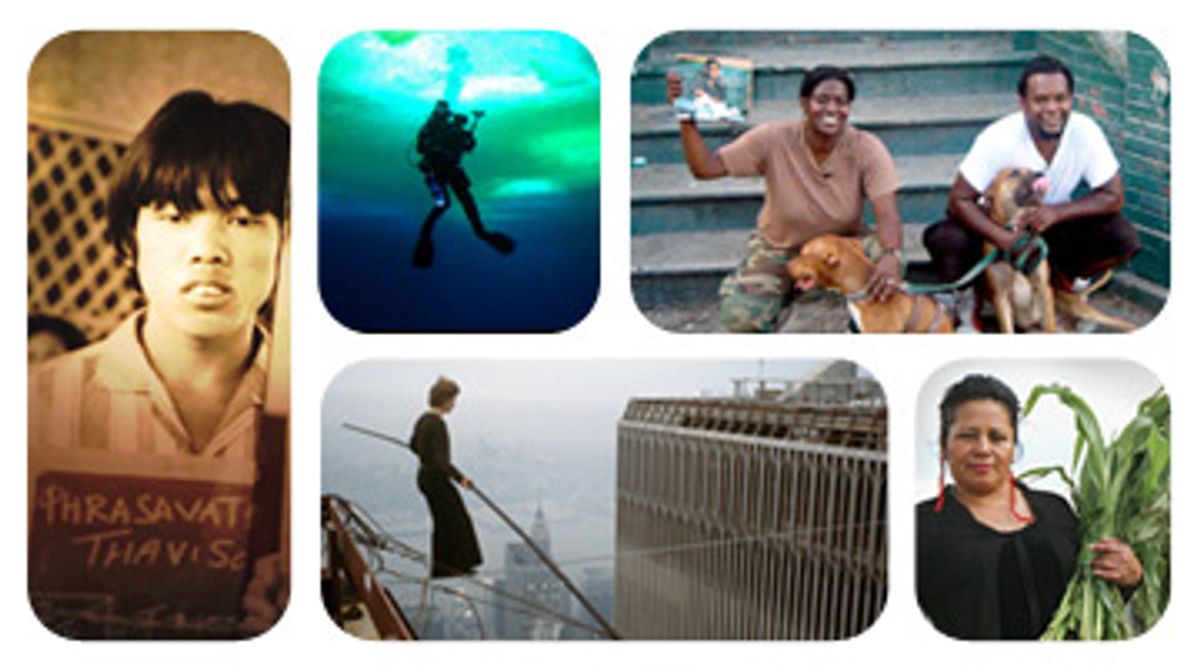 Clockwise from top left: "The Betrayal (Nerakhoon)," "Encounters at the End of the World," "Trouble the Water," "The Garden," and "Man on Wire."

It's traditional for every stakeholder in the documentary-film world to spend the winter months bitching and moaning about the Academy Awards. (It's certainly a tradition that has served this column well.) In years past it often appeared that the voting members of the Academy's documentary branch were not human beings at all, but cyborgs teleported in from a semi-mythical film world of the past. They had never seen any actual documentary film made since 1990, reasonably enough, and had a strong preference for movies about wide-eyed tots who play the violin and recite Frost poetry, while escaping from a Nazi death camp.

Thing is, for at least the last three or four years, those of us who love to complain about the docu-Oscars have pretty much been forced to put a sock in it. It's a sad state of affairs, but there's no avoiding it: The best-documentary category has become almost respectable! I mean, as in every awards ceremony since the Lascaux judges spurned that guy who painted the swirly, surrealist mammoth, there are grounds for whinging. I've already expressed my dismay that neither Margaret Brown's "The Order of Myths" nor Laura Dunn's "The Unforeseen," two tremendous examples of American filmmaking from way outside the L.A.-New York nexus -- and two of my personal favorites from the last year -- even made the short list.

As with every other Academy Award category, the eventual winner emerges from a complex calculus of Hollywood self-congratulation, emotional impact and marketplace heft that has little or nothing to do with lasting cinematic quality. I really don't believe that any serious person would look back at 2007 and 2006 and pronounce that "An Inconvenient Truth" or "March of the Penguins" were the best documentaries of those respective years. Simply put, they were the docs that made the biggest splash: One made a zillion dollars, and another focused the public's attention on an issue of world-historical importance. Last year, of course, in order to confound people like me, the Academy turned around and gave the big prize to Alex Gibney's "Taxi to the Dark Side," an undeniably important film about Bush-era detainee abuse that made less money in theatrical release than any Oscar-winning film of recent memory.

My confoundment continues into 2009; now that we're down to five nominees, I see three plausible (and eminently deserving) winners, one delightful surprise that has absolutely no chance, and one left-field, wild-card, insert-another-randomness-cliché-here entry that possesses a certain Hollywood mojo. The cynical gambler in me sneaks a black chip onto the table for "The Garden," the random-mojo movie, which might just steal the statuette next Sunday night. But then I revert to what I've believed all year, which is that the powerful post-Katrina documentary "Trouble the Water," a real-life yarn of struggle and heartbreak set in one of America's most forgotten neighborhoods, has a date with destiny in this transformative year.

I'll be delighted with that result, even though I'd probably rank "Trouble the Water" third among the four nominated films I've seen. Rather than proceeding into some tedious discussion about what makes a documentary "good" or what the Academy Awards are supposed to signify, let's cut to the chase. Since I've previously written about four of the nominated films (follow the links!), and have been unable to track down the fifth, this part should be easy.

"The Betrayal (Nerakhoon)" A gorgeous, impressionistic film more than 20 years in the making, longtime cinematographer Ellen Kuras' directing debut is the biggest surprise among this year's nominees. Kuras is well respected in the film industry (she shot "Eternal Sunshine of the Spotless Mind" and "I Shot Andy Warhol," among other pictures), but this lyrical study of a Laotian family's American odyssey has neither the present-tense topicality nor the clear narrative through-line Academy voters seem to favor.

Kuras' co-director is also her subject, Thavisouk Phrasavath, who swam across the Mekong River from Laos to Thailand as a 12-year-old in 1979. His mother and seven of his nine siblings eventually followed him to a new life in New York, although his mom says now that if she'd known then what American life was really like, she'd have gone back, even to the poverty and repression of communist-ruled Laos. Around 1985, Kuras got to know Phrasavath in Brooklyn, N.Y., and what they've emerged with two decades later is a tragic, elegiac film essay that interweaves an intimate family story and a larger narrative about the unpredictable long-term effect of an almost-forgotten war. It's a beautiful movie and you should absolutely see it and I'm extremely surprised it was nominated. Oscar odds: 1,000-1.

"Encounters at the End of the World" I could profess to be shocked by the fact that Werner Herzog has never previously been nominated for an Academy Award in any category, but why bother? Herzog has lived mainly in Los Angeles for more than 20 years, but both his documentaries and his rare narrative films remain ferociously idiosyncratic. It isn't that he's some kind of anti-Hollywood rebel, after 66 years on the planet and more than 50 feature films; it's just that he's never concealed his low opinion of the mainstream film industry or the fact that he doesn't care what it thinks about him.

All that is by way of explaining A) how remarkable it is that "Encounters at the End of the World" was actually nominated this year, and B) why it probably won't win even though it should. In my judgment this metaphorical and literal voyage to Antarctica is one of the best films of Herzog's career, maybe the best. He hears the prog-rock stylings of Weddell seals under the Ross Sea ice, meets a pipe-fitter descended from Aztec royalty and a philosopher turned forklift operator, and interviews a profoundly depressed biologist who describes life in the primordial seas at the dawn of creation as a Darwinist horror story.

As I wrote last June, Herzog's documentaries have edged ever closer to some kind of atheistic spirituality, as if he is paying tribute to the creative genius of a God he doesn't believe in. "In the hands of a lesser filmmaker, 'Encounters at the End of the World' could have been a quirky human-interest documentary, a National Geographic special or a New Age-flavored meditation on the mysteries of nature and the interconnectedness of everything. Perhaps only Herzog, veering from disagreeable crank to generous shaman and back again as he does, could combine all three in such an acrid, beautiful mixture." And there's really no way I can explain the suicidal penguin, except to say it was simultaneously the most tragic, most ridiculous and most noble thing I saw in a movie all year. Oscar odds: I dunno, let's say 5-1.

"The Garden" One of the ultimate Oscar sleepers of recent decades, this film hasn't been on any critic's radar screen and to my knowledge has no theatrical distribution or broadcast deal. Scott Hamilton Kennedy's documentary concerns the still-unresolved fate of South Central Farm, a 14-acre community garden in Los Angeles that was started after the Rodney King riots of 1992. Although the garden grew into a beloved local institution, the city council abruptly cut some kind of backroom deal to sell the land for development, reportedly at less than market value.

Outside of Oscar voters and a handful of festival attendees, almost nobody has seen "The Garden," and that includes me. Since it covers a hot-button issue in the film industry's hometown and features a certain amount of Hollywood firepower -- Daryl Hannah and Danny Glover appear in the film, and executive producer Julie Bergman Sender is a well-connected insider -- you can't count this out. There have been very few reviews; Kenneth Turan of the Los Angeles Times called it a "potent human drama" and a valuable case study in hardball politics. Oscar odds: 3-1.

"Man on Wire" James Marsh's film about Philippe Petit, the eccentric French wire-walker who strolled between the twin towers during an amazing week in 1974 -- the next day, Richard Nixon resigned -- is the most skillful and entertaining of this year's nominees. In terms of Oscar handicapping, that isn't really a positive, given the Academy's strong propensity to reward social-issue films. Marsh and Petit are well aware that the film arrives in a certain context -- those buildings aren't there anymore -- but the film is framed as a puckish adventure story, or a heist film by Truffaut, rather than as a history lesson.

It helps that the story has an amazing central character; then and now, Petit comes off as "a compact, intensely charismatic little guy who seems to be part acrobat, part madman and part Zen master or medieval mystic," as I wrote last April when the film played at Tribeca. His "physical strength, balance and coordination are well beyond normal human capacity, but it's clear that what he loves about wirewalking, more than anything else, is the intense mental concentration, the absolute requirement that you stay focused on where you are right now in time and space." In the end, I found "Man on Wire" much more than entertainment and something closer to therapy or magic; it restores those buildings to us, stripped of their terrible history and remade as symbols of joy and transcendence. Oscar odds: 2-1.

"Trouble the Water" What you're talking about with "Trouble the Water," which tells the amazing story of Kim and Scott Roberts, a poor African-American couple who lived through the worst Hurricane Katrina flooding in the Ninth Ward of New Orleans -- and videotaped it -- is human heroism and tragedy on a scale that swamps whatever limitations the movie around them may possess. Generally, the reviews of Tia Lessin and Carl Deal's film (including mine) have been ecstatic, but in private a fair number of documentary mavens have discussed the lumpy, uneven quality of "Trouble the Water," especially in its post-Katrina sections, or wondered about the filmmakers' ambiguous relationship with their subjects. (Kim Roberts shot almost a third of the footage we see on-screen, but is not considered its co-director or co-creator.)

In the end, I can concede some of those points while concluding that they're nothing more than minor caviling around the edges of a movie that offers its audience a tremendous emotional experience, and a chance to face its own prejudices about poverty and race in a spirit of healing rather than a didactic atmosphere of shame. It's a stereotype-shattering story of hope, not a gloomy litany of despair. As I wrote last August, people like Kim and Scott Roberts "don't generally have their own voices, or any other kind of autonomy. A sometime drug dealer, raised in dire poverty by a mother who died young of AIDS, may be understood by way of abstract categories: She's a symptom of criminal pathology or a symptom of racism, a victim or a perpetrator. She is hardly ever going to be seen as a complicated individual utterly free of self-pity, who believes herself fully in charge of her own destiny." Oscar odds: 1-3.