This war is our war

Democrats fought the surge and the surge -- sort of -- won. Now what do we do in Iraq? 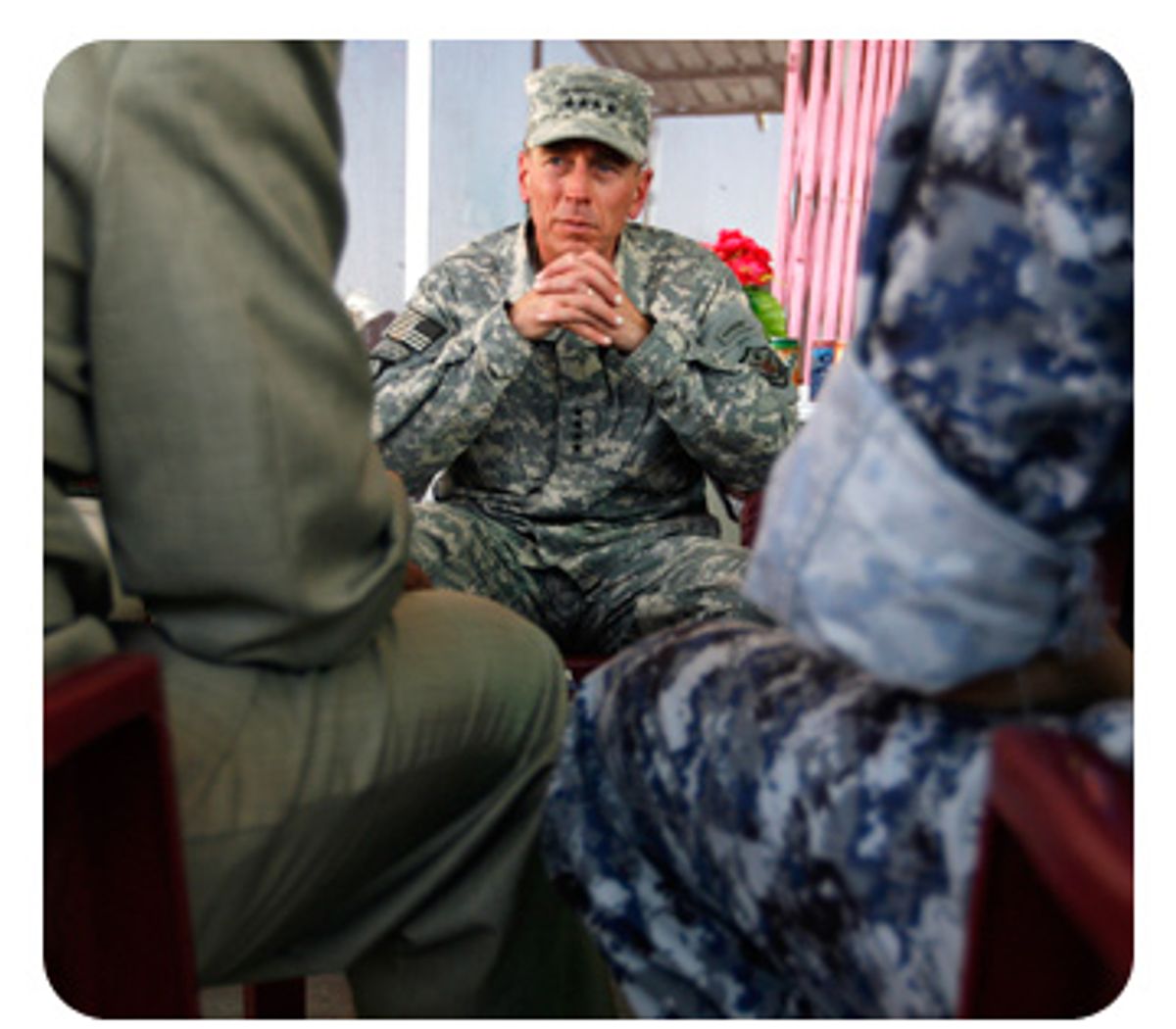 Back when I was regularly writing about Iraq and talking about it on television, I read everything the Washington Post's Thomas Ricks wrote about the war. From his devastating book "Fiasco" to his daily reporting from Baghdad and the Pentagon, Ricks was the nation's top expert on the folly of the U.S. mission in Iraq, from inept prewar planning to postwar execution to a botched occupation that led the U.S. to the brink of defeat without its leadership having a clue how bad things really were.

Imagine my surprise, and also perhaps Ricks', to find his new book, "The Gamble: General Petraeus and the American Military Adventure in Iraq 2006-2008," telling an admiring, often inspiring story of the way the American military came back from humiliation thanks to the so-called surge, which so many Democrats, myself included, passionately opposed. If you enjoyed "Fiasco," thrilled to have your prejudices about the clueless Bush administration confirmed, it's your responsibility to read "The Gamble" to have some prejudices challenged. In "Fiasco" decisions are made by knaves and buffoons like Donald Rumsfeld, Iraq reconstruction czar L. Paul Bremer and Iraq's first commander, Lt. General Ricardo Sanchez; in "The Gamble," the action is dominated by men Ricks respects, like retired Gen. Jack Keane, along with David Petraeus and his deputy, Gen. Raymond Odierno.

Ricks shows how the three military leaders ran their own insurgent campaign to get control of the disastrous war as it spiraled out of control in 2006. According to Ricks, liberals weren't the only ones appalled by Abu Ghraib, the massacres at Haditha and Mahmoudiya, and abusive interrogation practices all over Iraq. War critics within the military were likewise galvanized by those abuses, Ricks says, at least partly because they saw firsthand the ways American cruelty widened the anti-American insurgency. In a near-complete strategic turnaround, surge adherents argued that the way to victory was not killing as many Iraqis as possible but protecting them, building alliances by respecting Iraqi culture and religion.

If you were a fan of MoveOn's "General Betray Us" ad -- I was not -- you might have a hard time with Ricks' high praise for Petraeus' counterinsurgency planning and execution. He doesn't idealize Petraeus, he shows us his ambition and quotes skeptics and critics, but it's hard not to come away admiring what the controversial general accomplished in just two years. I had a harder time with the way Ricks lionized Gen. Jack Keane and his friends at American Enterprise Institute, the neocon think tank partly responsible for the disastrous Iraq war. I remember making fun of AEI's color-coded, Google-mapped surge sales brochure back in 2006, as well as its "neighborhood watch" approach to pacifying Iraq. It was tough for me to believe that one set of plans hatched at AEI destroyed Iraq, while another might begin to heal it.

The operative word, of course, is "begin." In fact, as you read about Petraeus and Odierno's successes, you see that the surge worked a lot like a neighborhood watch, backed by awesome weaponry. Still, it's hard not to admire the way soldiers (including Odierno himself) who once emphasized getting Iraqis to fear them now worked to gain their trust and even friendship, teaching themselves Arabic and befriending Iraqi families. It's also hard not to respect the way Petraeus and his team, unlike their predecessors, sought out and employed people who often disagreed with them. War critics who can't warm up to Petraeus or Keane will enjoy Odierno advisor Emma Sky, a British anthropologist and war opponent who nonetheless comes to feel respect and affection for Odierno and his soldiers, while remaining skeptical of the overall U.S. mission in Iraq; or Petraeus' translator Sadi Othman, a pacifist of Palestinian descent who is crucial in helping Petraeus reach out to and gain the trust of angry Iraqis.

This is not a pro-war book, or even, ultimately, a pro-surge book. It's inspiring along the way, but in the end deeply discouraging. It's clear that the single biggest innovation the surge introduced was not American soldiers respecting, and living alongside, Iraqi civilians and military troops, although that was important. It was the decision to ally with and arm Iraqi tribal leaders and even militias, Sunni and Shia alike. That strategy aided the "Anbar Awakening," in which Sunni sheiks rebeled against the abuses of al-Qaida in Iraq, but was also used in and around Baghdad, with Americans handing out guns and money to Sunni and Shia tribal leaders. For a time Ricks says the Americans were paying a staggering $30 million a month to these local leaders, some of whom were former insurgents who had killed American soldiers --  and some of whom could well kill again, either American soldiers if the U.S. stays, or rival Iraqis when we leave.

It's also clear that American military goals, not just strategy, changed in the course of the surge, in a way that has never been fully explained to the American people. Ricks no longer heard military leaders parroting the alleged goals of the Bush invasion: to create a flowering democracy that would not merely stabilize Iraq but spread throughout the Middle East. While Bush himself never formally changed course, he toned down his rhetoric at his new military leaders' urging. Ricks thinks Petraeus stated the new goals to the House Foreign Affairs Committee in April 2008: "We're not after Jeffersonian democracy. We're after conditions that would let our soldiers disengage." Petraeus' restraint makes Sen. John McCain sound deranged when, during the presidential campaign, he promised we were on the verge in Iraq of gaining "a strong, stable, democratic ally against terrorism and a strong ally against an aggressive and radical Iran."

Even as the goals for the Iraq war grew more modest and realistic, they remained out of reach. Ricks' reporting backs Democrats' claims that while the surge succeeded militarily, it failed to create the political opening that would allow Iraqis to govern and defend themselves. The central government is still at odds with the leadership of oil-rich Kurdish Kirkuk. There is no plan for sharing oil wealth or for reconciling other ethnic, religious or factional disputes. For all of Ricks' respectful, even admiring reporting on the military turnaround, he's clear-eyed about its limits. "The surge was the right step to take, or more precisely, the least wrong move in a misconceived war ... [It] was effective in many ways, but the best grade it can be given is a solid incomplete. It succeeded tactically but fell short strategically."

Ricks seems to surprise himself, at the end of the book, by concluding the U.S. needs to stay. "Even as security improved in Iraq in 2008, I found myself consistently saddened by the war, not just by its obvious costs to Iraqis and Americans, but also by the incompetence and profligacy with which the Bush administration conducted much of it. Yet I also came to believe that we can't leave."

You can read and admire "The Gamble" and disagree with Ricks' conclusion. A lot depends on the meaning of "leave" -- as well as on the meaning of the term "combat troops." Ricks challenges President Obama's use of that term to explain his 16-month drawdown plans, noting that all service members in Iraq -- cooks, convoy drivers, medical personnel -- have been combat troops at some point during the conflict. Certainly many so-called support troops have died in the war. "There's no such thing as 'non-combat troops' in Iraq," Ricks said in a recent interview. It does seem clear from Ricks' reporting that Obama's sober formulation, "We must be as careful getting out of Iraq as we were careless getting in," could be at odds with the deadline he's set for withdrawal.

Yet it's hard for me to reconcile Ricks' careful reporting with his conclusion that the U.S. must stay indefinitely -- at least until 2015 or so, meaning the war is less than halfway over. Many of the people Ricks respects seem to believe that a bloody civil war is inevitable whenever the U.S. pulls out -- and possibly even if it doesn't. Near the end of the book Ricks himself says: "It is not too much to say that American troops were dying to give Iraqi politicians the chance to find a way forward -- but that it wasn't clear if Iraqi politicians wanted that chance." I was still thinking about that statement when I finished "The Gamble," and it didn't make me think we should be in Iraq until 2015.

Although casualties are way down from where they were before the surge, American soldiers keep dying -- unbelievably, though, more by their own hand than by insurgents' violence last month, when at least 24 soldiers committed suicide. To his credit, Ricks talks about these tragic costs of the war, foreshadowing Mark Benjamin and Michael de Yoanna's devastating series on suicides and murders at Fort Carson, in Colorado. (He even mentions five 2008 murders at Fort Carson in his conclusion.) "The last few years have seen soldiers burning out after repeated tours of duty in the war, with high rates of posttraumatic stress disorder among combat veterans," he writes. "Rates of suicides and divorce have been increasing. Officers and sergeants are leaving in greater numbers. Some 50,000 soldiers now have prescriptions for narcotic pain relievers." Ricks also talks about the rising number of "waivers" being given to allow soldiers with criminal records into the military, and the declining number of recruits with high school degrees, a high predictor of military success. Again, it's hard to defend the high costs of this war given the continuing uncertainty about what it can or should ultimately accomplish.

Appraising the difference between my conclusions and Ricks' at the end of "The Gamble," I found myself thinking about the old adage "Where you stand depends on where you sit." Ricks spent a lot of time sitting in (and courageously running around) Iraq and American military bases, admiring and respecting the courage and intelligence of the men and women who've turned this mess around as best they can, and he understandably doesn't want their work to be in vain. I'm sitting in my office in California, where teachers and other public workers are facing furloughs and layoffs, and poverty, homelessness and crime are on the rise. So I still want troops out of Iraq as soon as possible. But reading this well-reported book may have changed even my notion of what that means.