The birth of a salesman

Barack Obama's administration learns how to pitch an economic plan, as it unveils a proposal to fix the housing market. 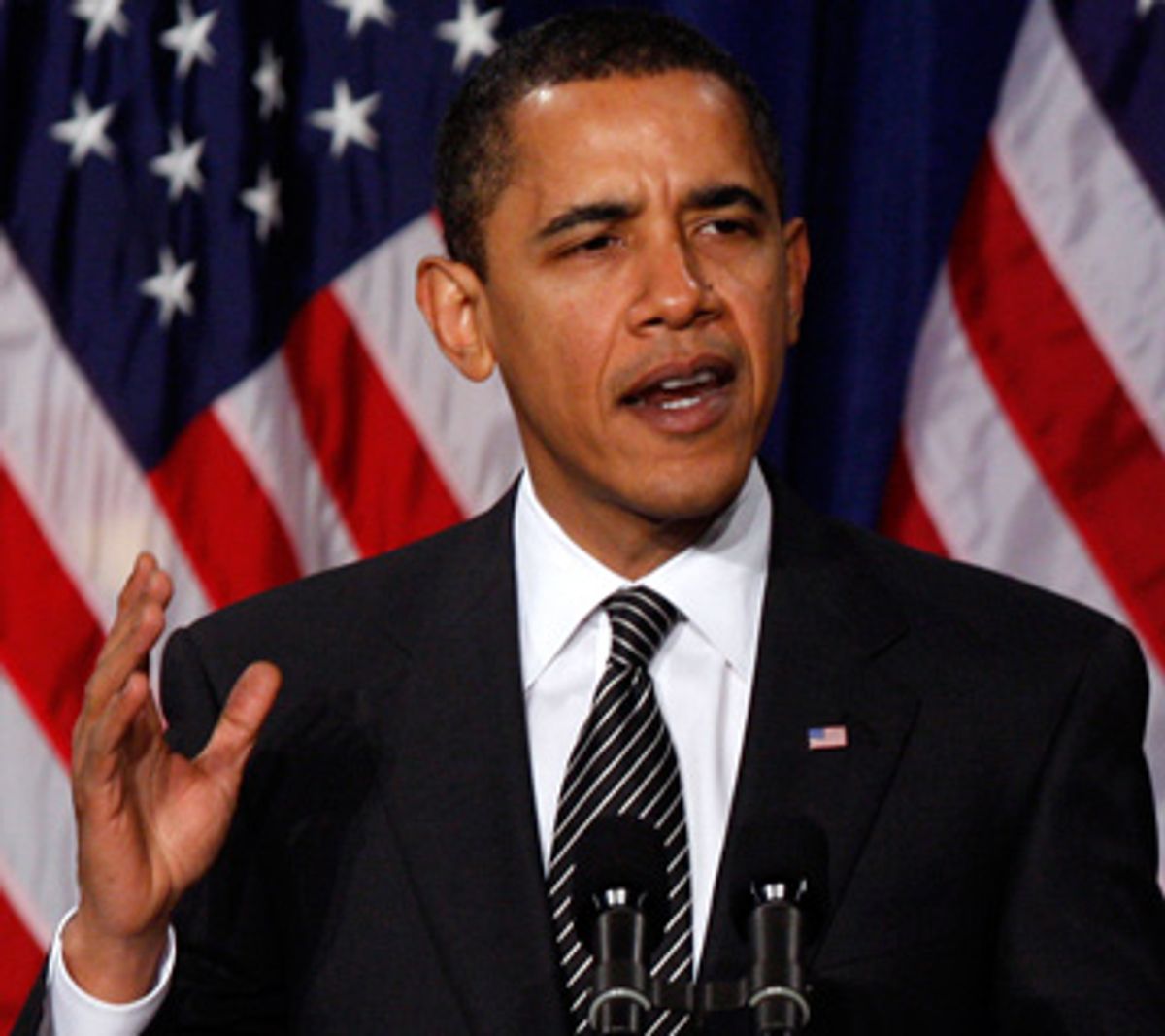 The Obama administration seems to have learned three big lessons in salesmanship from the bumps it endured in passing the stimulus bill and presenting its Wall Street rescue plan. One, sometimes the best way to sell Washington on an idea is to leave Washington and talk to the public. Two, let the president himself market the idea. Three, keep the idea simple, or as simple as a complex economic proposal can be.

To present its $275 billion plan to right the housing market, the White House airlifted President Obama into Mesa, Ariz., as close to dead center of the real estate collapse as you get -- 6 percent of houses in the Phoenix area were foreclosed on last year. Rather than letting a Cabinet secretary roll out the details, as the administration did with its Wall Street proposals earlier this month, Obama took the lead himself. And the plan impressed just about everyone who looked at the details Wednesday; even the stock markets managed to avoid collapsing in reaction, a sharp contrast to the way Treasury Secretary Tim Geithner's presentation on the Wall Street plan landed two weeks ago.

"This plan will not save every home," Obama said in Mesa. "But it will give millions of families resigned to financial ruin a chance to rebuild. It will prevent the worst consequences of this crisis from wreaking even greater havoc on the economy."

The plan has three basic parts, each one targeted. The centerpiece is a $75 billion fund to help about 3 million or 4 million homeowners avoid foreclosure and keep their homes, by encouraging lenders to issue them new loans limiting their monthly payments to not more than 31 percent of their income. Officials said that stemming foreclosures could raise the value of all homes by $6,000 apiece. Another program would target 4 million or 5 million homeowners who can't refinance their mortgages because their home value has dropped and they don't have enough equity built up to qualify for a new, lower loan. And finally, $200 billion would be pumped into Fannie Mae and Freddie Mac to keep interest rates low for new home purchases or for any other homeowners who want to refinance.

The Democrats who criticized the administration for vagueness on the details of the Wall Street plan a couple of weeks ago were back in line by Wednesday. "The Obama administration gets it," Senate Banking Committee chairman Chris Dodd, a Connecticut Democrat who knows a little bit about good mortgage deals, said in a statement. A spokesman for Barney Frank, the Massachusetts Democrat who chairs the House Financial Services Committee, called the proposal "a very good plan."

It wasn't just Obama's natural allies who came out in favor of the proposal. Bank lobbyists liked the plan; the U.S. Chamber of Commerce more or less liked the plan; even Republicans were basically reduced to griping about marginal details. Eric Cantor, the House GOP whip who masterminded the Republicans' unanimous "no" vote on the stimulus bill Obama signed into law Tuesday, asked six pointed questions about the plan but couldn't quite bring himself to oppose it. Republican complaints mostly focused on the idea that there was nothing in the plan to provide an immediate benefit to the vast majority of homeowners who aren't behind in their mortgages and haven't seen their investments tip underwater yet. In other words, the GOP wondered, why isn't Obama trying to help people who don't need help? The $200 billion to stimulate the mortgage market could help blunt some of that criticism, though, and Democrats weren't worried that the GOP had finally found itself a winning issue. "Home ownership is already a privilege in America," said Steve Adamske, Frank's spokesman. "You qualify for tax breaks. When you sell your house, you don't pay capital gains on the first $500,000 of equity. You get to write off the interest. There are a lot of privileges to home ownership."

But in case a stronger defense winds up being necessary, Democrats also noted pointedly that the Bush administration could have done the exact same thing under the authority Congress gave it during the financial crisis last fall, and didn't. "This is light-years ahead of anything we saw coming out of the Bush administration," said Andrew Jakabovics, a housing analyst at the Center for American Progress, a liberal think tank. Obama hit the same theme, a little less directly. "Our housing crisis was born of eroding home values, but it was also [born] of the erosion of our common values," he said. "And in some cases, common sense."

The contrast with the Wall Street rollout could hardly have been starker. Two weeks ago, Obama punted all of the work of selling the bailout plan to Geithner, essentially dodging questions on the plan at a press conference he held the night before Geithner's presentation. With the housing plan, Obama took the lead. Bits and pieces of the Wall Street plan leaked out of the administration ahead of time, but afterward, insiders grumbled that some of the most important details never made it to the public. On housing, the finished plan turned out to be more ambitious than observers had expected. "It was night and day," a senior Democratic aide on Capitol Hill said of the marketing job.

For weeks, Obama's aides have said the administration's three main economic plans -- the stimulus bill, the housing plan and the Wall Street bailout -- all needed to work together to begin to turn the recession around. In a span of two days, Obama added the $787 billion stimulus and the $275 billion housing plan to the mix; Congress had already given him the authority to spend the second $350 billion installment of federal money to rescue the financial sector. As the saying goes inside the Beltway, a few hundred billion bucks here, a few hundred billion bucks there, and pretty soon you're talking about real money. But the administration also seems to have remembered that cash alone doesn't always do the trick. Even with spectacularly large sums, you still have to sell it.