For higher office, and away from their earlier statements about how much they hate the whole idea of the stimulus. 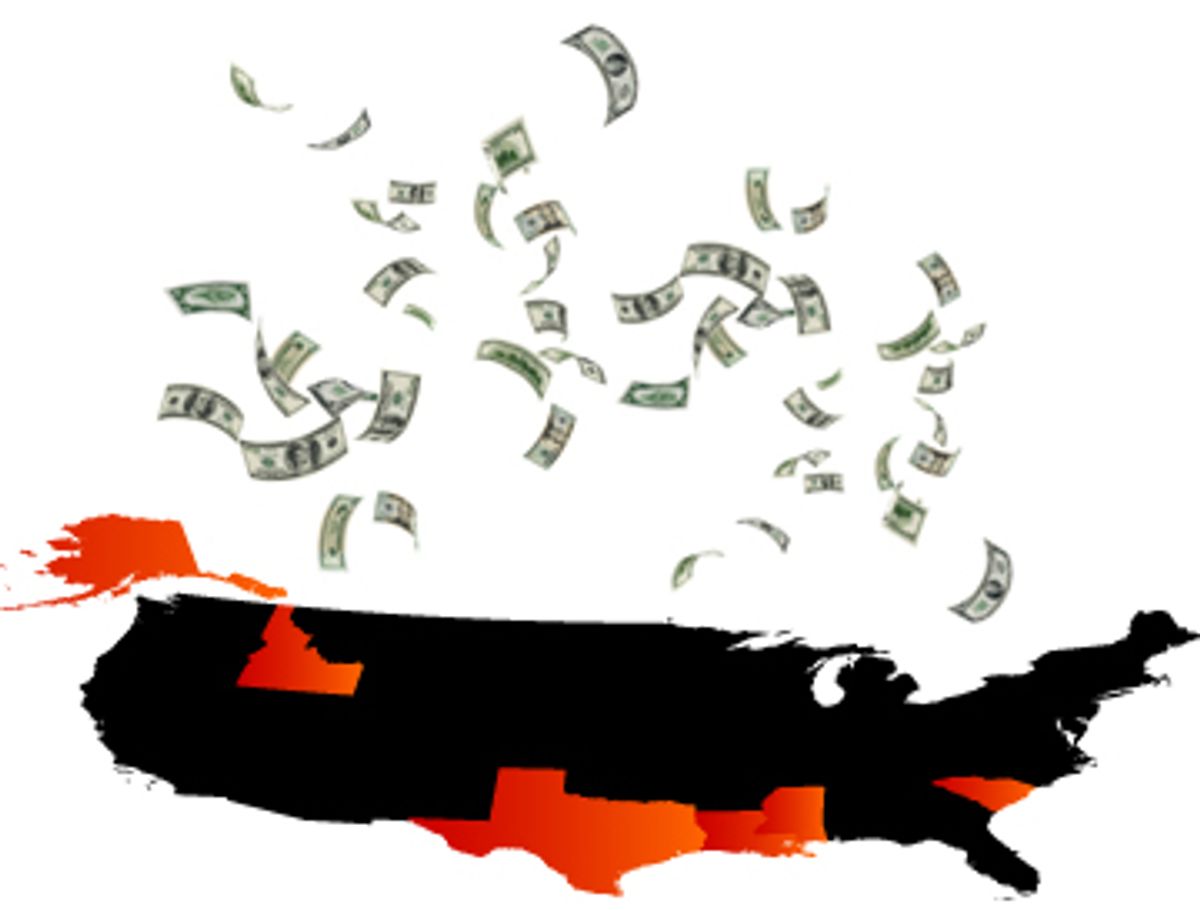 Voting against the economic stimulus package? That's so last week. For some Republicans, there's a hot new way to show just how fervently they opposed the $787 billion bill President Obama signed into law Tuesday: pretend they're not going to take the money.

Or, at least, make a lot of noise about maybe not wanting it. A handful of GOP governors are making headlines for saying they'd rather not or maybe shouldn't take the billions of dollars the stimulus package would rain down on their states. It's the logical extension of the Republican strategy on the bill, after all; only three Republicans in the Senate, and none in the House, voted for the legislation, after the party decided en masse that the plan would put the nation on the road to socialism. If the spending won't fix the national economy, the theory goes, it won't fix the local economy, either.

But despite the protests, the governors will almost certainly wind up taking the money anyway, just as states do with federal aid all the time. Some of the states whose governors have been the loudest voices against the stimulus cash already benefit heavily from federal spending or from lucrative private use of federal land for oil. So perhaps it shouldn't be a surprise that Texas Gov. Rick Perry decided Thursday to accept the $17 billion his state has coming to it, after days of hemming and hawing about the handout. South Carolina Gov. Mark Sanford, who wrote an article for the Wall Street Journal Op-Ed page in November titled "Don't Bail Out My State," did the same. They're in good company; Minnesota's Tim Pawlenty criticized the plan loudly while Congress debated it, then said he owed it to his constituents to take it. Alabama Gov. Bob Riley stepped up his criticism of the bill after announcing he would take the $2 billion his state gets from it. Republicans in the House even boasted about the bacon the bill would bring home, after engineering a unanimous vote against it. When just about every state is in a financial crunch, thanks to the collapsing economy, it's hard to hold the line and actually turn down the cash. "It's fucking stupid," said one Republican consultant in Washington. "If the money's there, they'd be nuts to not take it ... If it's a question of, 'Hey, the money's going to be spent, so we might as well spend it in our state,' that's just nuts to turn it down."

Of course, in the bizarro world that is Republican politics in the age of Obama, turning down billions of dollars in federal aid might make political sense. "You could be a hero as the one guy who said no," said anti-tax activist Grover Norquist, who thinks opposing the money could help establish fiscal conservative bona fides with the GOP base. "The longer you look at this [bill], the more it smells." Republicans who don't like the stimulus plan are likely to notice the high-profile complaints this week. "Some Republican governors aren't big on federal largesse even when it helps their own constituents," said GOP strategist Mark McKinnon, who says the holdouts against the money deserve credit for standing on principle. "Pretty bold, I'd say."

But in the end, refusing the money actually comes at very little cost; a provision in the stimulus law allows state legislatures to vote to accept the cash even if the governors don't formally request it. What's playing out this week, then, among the Republican refuseniks may be more about politics than policy. Here are six of the more vocal Republicans who pretended to just say no, and the amount of stimulus money they pretended to decline.

You can keep your money: "Congressman Young and Senator Murkowski did their best to achieve the right balance in the bill, but in the end the majority allowed the spending to balloon and encompass support for programs that don't respond to the problem at hand." -- Feb. 16

Why am I saying this? If you don't think Palin is thinking of running for president in 2012, you may be interested in buying a bridge from Gravina, Alaska, to the Ketchikan airport. She's popular with conservatives; given how unpopular she is with just about everyone else, Palin can't afford to let people get to her right on too many issues. She's already campaigned on her ability to say "thanks, but no thanks" to federal money -- even if she didn't actually do it -- so turning down the stimulus may be an easy political call.

Thanks for the money: "It's not fair to Alaskans to create expectations about programs that wouldn't be sustainable, so we'll need to look at the federal funding on a case-by-case basis." -- Feb. 16

Does my state need the money? Unemployment is 7.5 percent and lower oil prices have meant fewer revenues for the state. Palin has proposed cutting the state budget $445 million.

You can keep your money: "If I were in Congress and I looked at it, someone would have to be more convincing than they have been and I probably would say no." -- Jan. 12

Why am I saying this? A fiscal conservative with a libertarian streak when he was in Congress, Otter seems -- unlike some others -- to have few ulterior political motives for bashing the stimulus. He's almost certainly not running for president, and he doesn't appear to have any serious primary threats if he seeks reelection next year. Idahoans do like their politicians to have an independent streak, though it's unclear if they like it enough to turn down almost $1 billion.

Thanks for the money: "It will take a lot of work to get our arms around all the implications of this law. We need to make sure safeguards are in place and that every i is dotted and t is crossed. This is taxpayer money, and all of us are committed to seeing it used in the most effective and efficient way possible." -- Feb. 17

Does my state need the money? Prior to the stimulus, Idaho was looking at slashing $110 million from public-school funds and an across-the-board pay cut for state employees. The state legislature will now extend its session into April to figure out how to use the federal money to avoid cuts.

You can keep your money: "I do worry about the debt being created. I worry about the fact that our children and our grandchildren will have to pay back this debt. And I worry that many of the programs that are being called temporary aren't really temporary at all." -- Feb. 10

Why am I saying this? He may say he's not running for president in 2012, but Jindal is a popular, young, non-white rising star in a party that's desperately seeking to change its image. Taking a combative public stand on an issue the conservative base cares about deeply wouldn't exactly hurt his chances. Just weeks before he declared himself out of the running, Jindal had gone on a heavily publicized tour of Iowa -- not a move that screams out, "I don't want the job."

Thanks for the money: "Republican Gov. Bobby Jindal said Monday that if he were still in Congress, he would have voted 'no' on the federal stimulus bill. But he said he will review the final version of the bill for federal money for Louisiana projects."  -- Feb. 16

Does my state need the money? The state budget deficit for next year is now projected to reach $2.1 billion. State universities are expecting to cut their budgets up to 30 percent.

You can keep your money: "It's not a possibility of strings being attached, it's a certainty ... there may be some things that we'd be better off not to take." -- Feb. 2

Why am I saying this? It does seem odd to think the Republican Party would nominate an old Southern white guy -- who used to be a lobbyist -- to do battle against Obama three years from now, but stranger things have happened in politics. Barbour has a fairly active federal leadership PAC that gave more than $90,000 to Republicans all around the country during the last election cycle, and he's forbidden by state law from ever serving as governor again after -- conveniently enough -- January 2012.

Thanks for the money: "I've never said we were going to reject it. I have said, however, that we are going to make prudent decisions based on what's best for Mississippi." -- Feb. 18

Does my state need the money? Gov. Barbour has already ordered $38 million cut from state university budgets this year and the schools expect another 10 percent cut next year. The state unemployment rate is 8 percent; White House projections say the stimulus bill would mean 30,000 jobs in Mississippi.

You can keep your money: "I think that this is the biggest gut check we've ever had as a country on, indeed, where we go next, on a politically-based economy or a market-based economy." -- Dec. 17

"A problem that was created by building up of too much debt will not be solved with yet more debt." -- Feb. 8

"We're moving precipitously close to what I would call a savior-based economy."  -- Feb. 8

Why am I saying this? Some conservatives were disappointed Sanford didn't run for president last year; chances are pretty good he's at least considering a run next time around. (GOP gossip held that South Carolina Republican boss Katon Dawson's bid to head the national party was motivated at least in part to help Sanford win the nomination.) Sanford has even taken to the Wall Street Journal's Op-Ed page -- a good place to get attention from conservative activists -- to attack the stimulus twice, first with a November piece titled "Don't Bail Out My State," and then again in December with an anti-bailout article co-authored by Gov. Rick Perry of Texas.

Thanks for the money: "Being against it doesn't preclude taking the money."  -- Feb. 19

Does my state need the money? The state's budget has already been cut by more than $1 billion since July, and unemployment -- at 9.5 percent -- is the third-highest in the nation. The White House says the stimulus money would create 50,000 jobs there.

You can keep your money: " We're asking other governors from both sides of the political aisle to join with us in opposing further federal bailout intervention for three reasons." -- Rick Perry and Mark Sanford, Dec. 2

Why am I saying this? Perry is probably more worried about next year than he is about 2012; he faces a likely primary challenge from Republican Sen. Kay Bailey Hutchison. He wound up taking the money, but making clear how opposed he is to federal spending will probably come in handy if he does have to fend off KBH -- who, as a member of the Senate Appropriations Committee, could be vulnerable on questions of fiscal discipline.

Thanks for the money: " I might as well quit grousing about it, because it's reality now." -- Feb. 17

"On behalf of the people of Texas, please allow this letter to certify that we will accept the funds." -- Feb. 19

Does my state need the money? Texas doesn't face a budget shortfall for fiscal year 2009, though it may for fiscal year 2010, and its unemployment rate of 6 percent is lower than the national average. But the White House estimates the stimulus will create 269,000 jobs there.

Sources: Numbers for stimulus funds to each state come from a spreadsheet prepared by the National Conference on State Legislatures. The ratio of money sent by each state to the federal government versus the amount paid in, and the ranking, is from a chart compiled by the Tax Foundation. Number of jobs created by the stimulus is based on a White House projection. Unemployment rates for states are as December 2008, per the Bureau of Labor Statistics.