"You can't sweep unlawful activities under the table"

Abu Ghraib investigator Antonio Taguba talks to Salon about why he backs a commission to examine Bush torture policies. 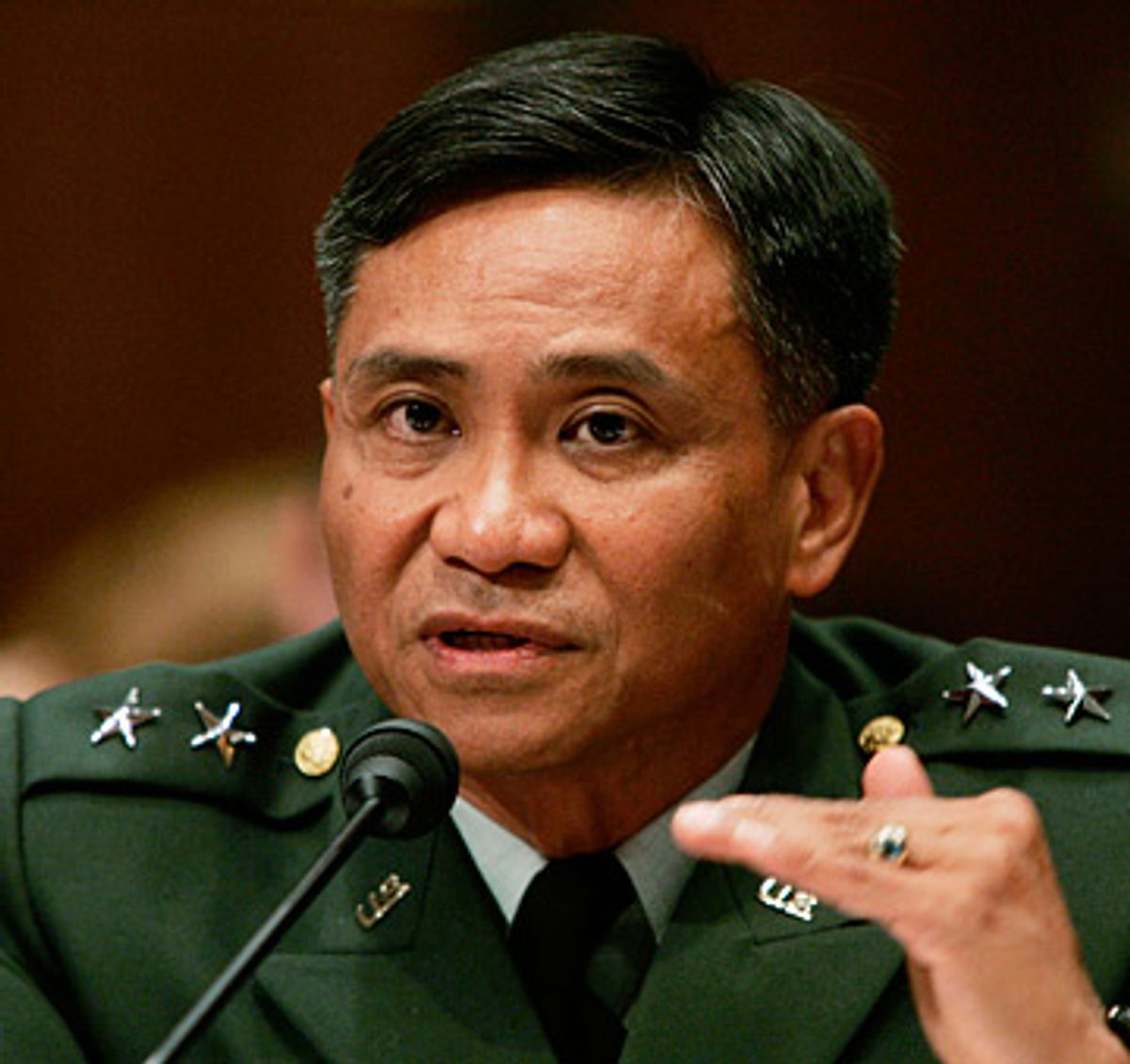 President Obama vowed that "the United States will not torture" only two days into his new administration. But one big question Obama hasn't answered is whether and how to investigate notorious Bush-era interrogation and detention policies. On Thursday, 18 human rights organizations, former State Department officials and former law enforcement and military leaders asked the president to create a nonpartisan commission to investigate those allegedly abusive detention practices.

Retired Maj. Gen. Tony Taguba, who investigated the famed abuses at Abu Ghraib, signed on to the effort. He explained his support in an interview with Salon. Taguba agrees with many attorneys who think it would be difficult, and perhaps impossible, to prosecute former Bush administration officials. A nonpartisan fact-finding commission, however, might provide some degree of accountability for official U.S. detention and interrogation policies that Taguba called misguided and illegal.

Taguba would like to see a broad mandate for the commission, including a study of administration claims that abuse gleans good intelligence, which he fervently disputes. And while he believes the commission should look at the decisions of military and civilian policymakers, he has a particular interest in getting to the bottom of civilian leaders' claims for the legality of the administration's interrogation and detention policies, which he called "despicable and questionable." The retired general would also like to see the commission empowered to make recommendations for the future, to help ensure such abuses never occur again.

You are best known for doing an honest investigation of prisoner abuse at Abu Ghraib. You suffered some consequences for that. Is that fair to say?

As far as consequences are concerned, the report and testimony were not going to be well received. I followed my conscience and integrity -- the best I could do to honor the Army uniform I had the privilege of wearing for over 34 years.

They parked you at the back of the Pentagon in retribution, right?

I was disappointed in my assignment back to the Pentagon to be on Rumsfeld's staff. I was suspicious about the assignment. But I served at the pleasure of the president and performed as expected. It was conveyed to me by close friends that I had to be watched closely by senior leaders.

Can you describe this torture commission that you and others are advocating?

I would not refer to it as a torture commission. [It remains to be decided] if it is to be a truth and reconciliation commission, or a presidential commission, or a congressional commission, or a private commission ... Interest groups have talked about establishing a special prosecutor in that regard. I feel we have to come to terms with policies that have gained such notoriety and have been debated about whether they were in the best interest of our national security, and whether those who created these policies were pressured by their senior leadership.

Are you advocating one particular flavor of a commission, or are you simply advocating for an investigation in general?

"Investigation" is a good term, but not one I would subscribe to. [I support] a structured commission with some form of authority with clear objectives and a follow-on action plan. I'm not looking for anything that is prosecutorial in nature, unless a suspected violation of relevant laws occurred, which should be referred to the Department of Justice.

That was going to be my next question. Why not?

Because it would be difficult. In my opinion, our military prosecuted those who were involved in torture or unlawful interrogation. And I think our military has come to terms with that. We are an institution that prides itself on taking corrective action immediately, admitting to it, and holding ourselves accountable. And we have done that. But I am not so sure that our civilian authorities in government have done that for themselves.

Is there still a lot of dirty laundry out there that we don't know about?

I think so. This notion that a lot of constitutional legal experts -- lawyers with great intellect, well-educated -- came up with such despicable and questionable legal findings that were contrary to the definition of defending the Constitution? And then they framed this as if the executive branch had the authority to extend beyond the Constitution to establish a policy of torture and illegal detention?

The argument against a commission is that it would turn into a political catfight between Democrats and Republicans. What is your response to that?

I think we have to satisfy the American public at large. Some of those that were tortured were innocent. How do we come to terms with those that were cruelly mistreated and were innocent, never charged, were illegally detained and never compensated for their suffering? This is not a political issue, but a moral and ethical dilemma which has far-reaching implications.

Proponents of coercive interrogation argue that it works. I can't find an experienced interrogator who thinks torture is an effective way of gathering quality intelligence. Should the efficacy of torture be a part of this commission's work?

I think so. You have two sides here. One says, "We had to do it." The other says, "It never actually worked." You have to consider this in those terms. Some of those activities were actually not effective and those who thought so were in the academic or pristine settings of their offices. What would they know?

Should people receive amnesty for coming forward and participating in a commission of this type?

If you want people to talk, you need to give them that immunity. I would submit to you that issuing a subpoena to people like [former counsel to the vice president David] Addington, [former Justice Department attorneys John] Yoo and [Jay] Bybee or [former Pentagon general counsel Jim] Haynes will not work. They are not going to come up and talk freely because they want to save their reputations and write books about it. They know their positions and so do the public. They know that it was illegal.

But you have other folks, soldiers, for example, or civilian contractors who are willing to address why things happened and who gave them the authority to do these things.

What else should I have asked you?

This is a comment. In the opinion of some legal experts, it would be extremely difficult to stand up a commission and question those in government because they were supposedly acting in the interest of national security. What do we say to the soldiers who committed wrongdoings with regard to detention operations who were also acting in the interest of national security and who are now in jail or who have been punished? If the military can hold themselves accountable, why can't the civilian authorities be as well? Why can't they hold themselves accountable as well?

So, you've got low-level soldiers in jail. Why not take a look at the people who put those policies together in the first place?

When the policymakers create a policy, you have to account yourself for the consequences unintended or intended. The question we ought to ask these civilian authorities is, What was your intent in creating those illegal policies? What was the intent? Was the intent in the interest of national security, which is broad and contestable? What was the intent and what were the lawful precedents, if any, that led them to these highly questionable opinions?

It seems to me that if we don't do some sort of review, this thing will just continue to come out in dribs and drabs and sort of haunt us forever. Do you agree with that?

I agree with that. You can't sweep unlawful activities under the table and just forget about it. I feel strongly about this because we have future generations who will be the beneficiaries of these actions. We have a president who declared that torture is illegal. He signed executive orders repudiating torture and unlawful interrogation practices.

We have a lot of unanswered questions on accountability, questions that need to be answered and hold responsible officials -- civilians and military -- accountable. These include contractors. We ought not to refer to accountability as a bumper sticker or to be used loosely. We have an integrity issue to contend with if we are to prevent this matter from recurring.