This is the guy who writes the Oscars?

Bruce Vilanch, the outrageous gay icon behind the Academy Awards, talks about negotiating with actors, Hugh Jackman and sneaking in fart jokes. 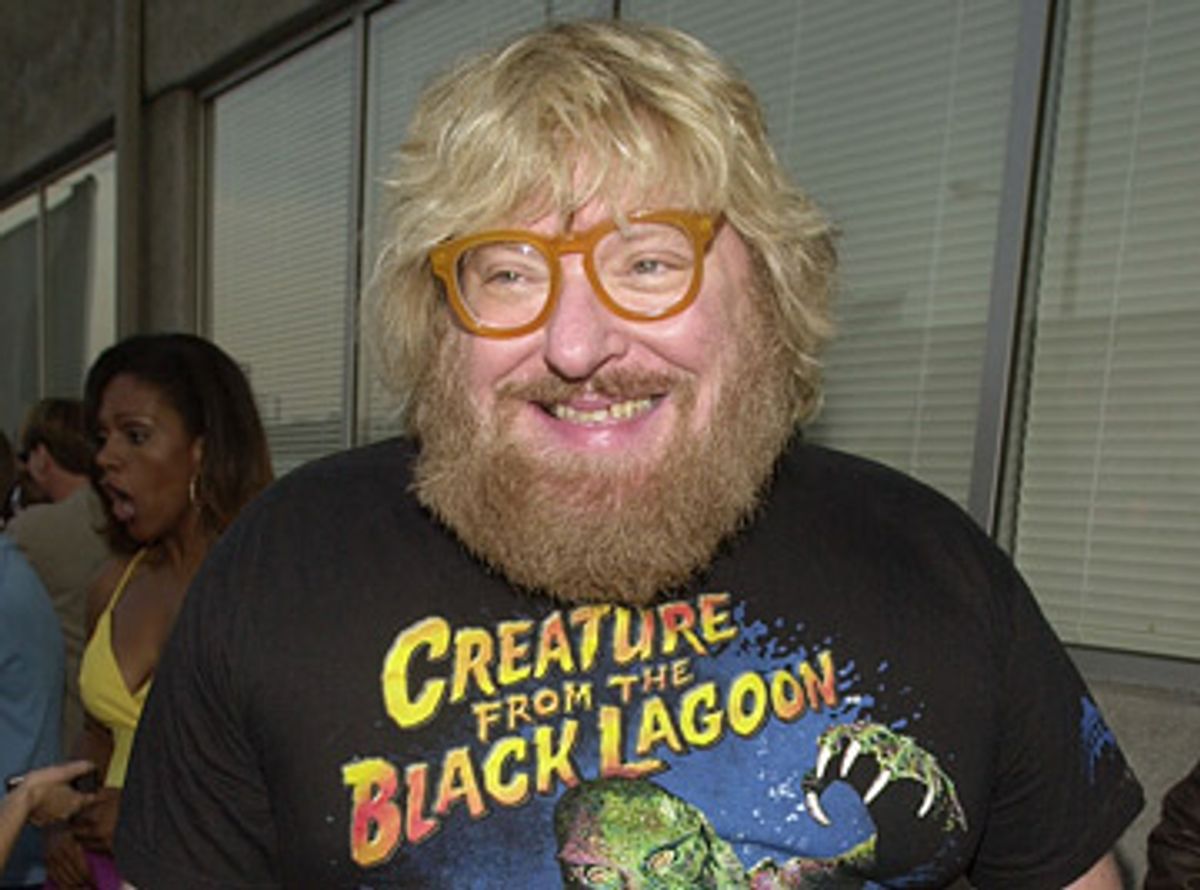 Remember when Jack Palance did a one-armed push-up at the Academy Awards? It was a funny moment and host Billy Crystal riffed on the 73-year-old's virility for the remainder of the broadcast. Those riffs were written in the wings where writer Bruce Vilanch, Billy Crystal and their team tossed jokes around frantically during the live spectacle -- a feat that earned them an Emmy.

Bruce Vilanch is a funny guy, but he isn't a household name. He may be best known for his 1990s stint on the TV game show "Hollywood Squares," where he was also head writer. Earlier in his career, Vilanch helped write one of the worst television events ever: "The Star Wars Holiday Special." The 1978 broadcast featured seemingly endless dialogue in Chewbacca’s native language and a sultry, hilarious virtual-reality fantasy sequence.

Vilanch is also recognizable as a large (he lost 25 pounds on "Celebrity Fit Club") gay man with a lionlike mane, perfect for the role of Edna Turnblad in "Hairspray," which he played on Broadway. His eccentric appearance and quick wit have made him a gay icon, secured his career as a comic and ensured him an ongoing gig on the Academy Awards, which he has written for the past 20 years. He has been the head writer since 2000, penning jokes for some of America's best-known comedians: Whoopi Goldberg, David Letterman, Steve Martin and Jon Stewart.

Last year, the writers' strike threatened to derail the Oscars. Although the strike ended in time, the jokes and silly montages felt half-baked. This time, Vilanch and the show’s producers are faced with falling ratings, a bad economy and the constant question of whether anyone will watch. They’ve made some changes to keep the show fresh, including a new narrative approach (the broadcast will "tell a story," says Vilanch). It’s also the first time in recent history that the host is not a comedian known for his ability to be funny under pressure; instead, he's People magazine's sexiest man alive, Hugh Jackman. This will undoubtedly affect the rhythm of the presentation, as well as alter the traditional stand-up routine that opens the show.

But some things just can’t change. There are all the regular restrictions of network television (no nudity, for example), the same 24 awards, and the same old 81-year-old Academy, which, like any 81-year-old, is "crotchety," as Vilanch puts it. So how does a goofy comedian with a sometimes infantile sense of humor (see his proudest moment below) tackle the black tie affair? With a genuine giddiness that comes with crashing the year's most glamorous party.

Salon spoke with Vilanch on the phone from his home in Los Angeles.

How has the show changed in 20 years, and how has the humor changed?

The show has changed in 20 years only in so far as the Academy will let it change. It was put together by a bunch of people who believe the art director is as important as the star so there are 24 awards we have to give out. Maybe 20 of them we care about, and four of them the public cares about -- the acting awards and maybe if we’re lucky we get a star in some other category. But since we can't turn it into the Golden Globes where they give 20 acting awards, we try and change up the way things are done in hopes that that will keep people on the edge of their seats through the rest of the stuff.

Johnny Carson once said the Oscars are an hour and a half of entertainment spread out over a four-hour show. And we’re trying to change that a bit, but there's just so much you can do.

Are there restrictions on what you're allowed to say, or have people say and do?

Oh, there are plenty of restrictions. All the usual network things. I mean, you can't come out and say, "Now, the award for best new tits"-- you just can't do that. We ask presenters not to grandstand, not to turn to this gigantic global audience and suddenly make a little speech for their political cause or charitable cause or whatever cause. And basically by the time they get onstage they've signed off on a script and if they vary from it, it would really be bad form. They'd get their wrists slapped.

But the winners can say what they want. They've won an Oscar and if they want to get up there and use their 45 seconds to say, "We should feed the corpulent children of Grosse Pointe, Mich.," go right ahead, knock yourself out. It makes for good TV.

So the presenters sign off on the script before they go up. What's the process like to write material for them? Is there a negotiation?

It’s always a negotiation. It gets sent to them and it is read by everybody on the planet who knows them. And you get notes from their publicist, their manager, their agent, their pet psychiatrist, their gardener, their Pilates instructor, everybody chimes in and says, Here’s what I think you should say. Or they don’t read it at all until they're in the car on the way to the rehearsal the day before the show. And then they walk in and the first thing we do with all of them is sit them down with the producers and go over the material so that we can make the changes right on the spot and put them in the teleprompter.

I was looking at previous ceremonies online and realized I had forgotten the Robert Altman presentation that Meryl Streep and Lily Tomlin did, and the year Billy Crystal came on as Hannibal Lecter. Is that all pre-written, or is there anything that happens on the fly?

People ad-lib, sure. The stuff that mostly is different is what the host does. The host is literally the host of this party and is reacting to what goes on before, so if a winner has said something or done something that's worthy of comment, then the next time the host comes on he'll have something. We're watching the show like everybody else and we're rewriting frantically.

What is it like to be in the wings during the show?

The host is in a little house that they build offstage and there's a big TV monitor and phones so that we can call the booth and say, we're changing this, that and the other thing. One year when Steve Martin was hosting and Michael Moore won, Moore started doing a thing about the Bush administration and the war and he got booed. We were in the back in Steve's little cubicle yelling jokes at each other about what we could say about Michael Moore, and so finally when Steve came out, he said, "It's so sweet backstage. The teamsters are helping Michael Moore into the trunk of his car."

Do you have your own favorite Oscar moment?

Well, it's not elegant, but I got a fart joke onto the show. It was the year Whoopi was hosting, of course, because she's queen of the fart jokes, and Vanessa Williams was doing a number called "The Color of the Wind" from "Pocahontas." It was a very elaborate, overproduced number and Whoopi came on afterward and said, "That's something I've always wondered. What color is my wind?" I was just so proud that we got it on.

There's a tremendous difference. But I've written for Hugh Jackman before on three different Tony Awards shows. He's not going to come out and do a monologue the way a stand-up would, but he's going to say some amusing things. And that's different from putting together 10 minutes for a comic to come out and do. The basic difficulty is when you have actors who have never been onstage as themselves coming out there. He's got no character to play so you kind of have to help him come up with one.

This year for best supporting actor you have Robert Downey Jr. in blackface and then you have Heath Ledger. So how do write something like that?

Actually, this year we're going to do supporting actor differently and I'm not allowed to tell you how. It's one of those state secrets that I've been sworn not to reveal. And since the New York Times described me as tight-lipped and I got a lot of dates after that, I've decided I have to remain that way. Otherwise they'll beat me around the head with an Oscar and I'll get loose-lipped. But it's an unusual year in that category.

In what other ways will the show be different?

There are two new producers and they have a whole bunch of new ideas. The show this year is going to have narrative, which will be interesting, it will tell a story. It's going to be different -- but of course it's going to be the same. Twenty-four awards are going to be given out and there will be no stopping the parade of sound editors coming up to accept. That kind of stuff, which I personally cherish.

What makes a good acceptance speech?

I think it's better to talk about how you feel, what the movie meant to you, than it is to thank everybody you've ever met and slept with. Because you can call them up individually. But there are all these millions of people out there who are listening to you and they would much rather hear you be genuine and emotional about the fact that you're winning an Academy Award or that Harvey Milk was your hero or something like that. That's much more entertaining.

Can you tell me more about working with Hugh Jackman? Is he actually funny?

He's hysterical. He's gracious, he's a lovely dancer, and once he gets older and looks better I think he'll have more of a career. He wants it to work, obviously. But comics have a different mind-set. If you don't laugh at everything they do they go into a panic. He doesn't have that. He doesn't need saviors. You know, comics will come out and do a joke and if it doesn't work they'll have to say, something like a savior, like, "Well, that was funny when Bernie Madoff told it to me" or something like that. He doesn't need that.

If you could design your fantasy Oscar show, what would it look like?

Well, it would be all nude, no question about that. It would just be all nude and no one would care about the awards. The ratings would skyrocket.